I figured this would happen, eventually

I just didn’t think it would happen so soon.

Let me backtrack a bit. The sun came out last week, it wasn’t supposed to. I was busy taking care of things on my “to do” list (this did not involve working in the garden) but seeing the sun I had a strong urge to get out. Just for a bit. But where? Ah! A nursery I hadn’t visited yet this season, I’ll drive to The Gardeners Choice in Tigard, that’s a quick trip, back home in a little over an hour. Besides it won’t have anything too tempting so I can stay on budget for the Hardy Plant Society Sale. Thus you see it was fate that took me there…to see these: 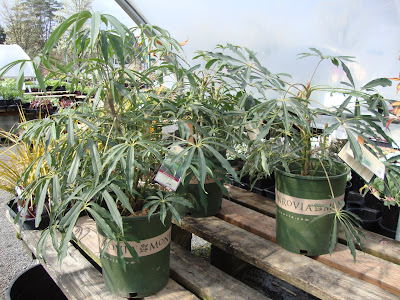 For the first time I am faced with the opportunity to actually buy a Schefflera taiwaniana, one of the big 5-gallon ones I’ve been seeing at the garden shows! I didn’t think I would see one of these in the nurseries until mid to late summer, at best. 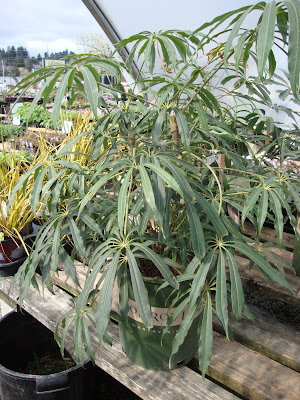 But you see I’d been telling myself that when this moment came I would just smugly walk on by, having already been given a S. taiwaniana by Sean Hogan (one propagated at Cistus). That was so much better than just laying down the cold hard cash, anyone can do that (well, anyone lucky enough to happen upon one of these hard to find plants), that first one was a gift! Someone cared enough to satisfy my plant lust!!! Plus the Cistus version has red petioles (hope I’m using the right word) making it extra colorful! 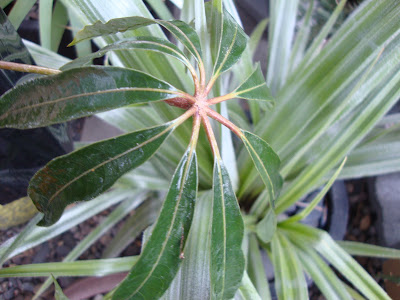 What to do, what to do? Well of course you know what I did, don’t you? 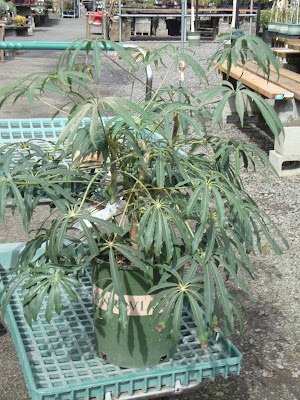 I bought it. I just couldn’t help myself. Especially when it was significantly cheaper than I’ve heard these guys are going for. Significantly. 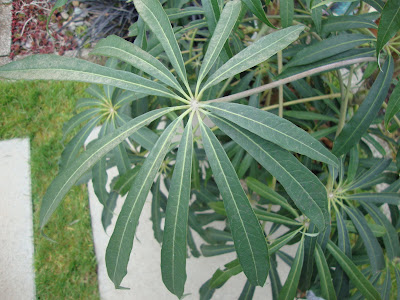 Naturally I not only bought one for myself but I also got one for Megan, my fellow plant luster, after all she was the very first person to introduce me to this amazing plant. And I left one behind…for the next lucky person. Okay, truth be told the only reason that there was one left behind was because it was quite damaged, frost maybe? A disease? It just didn’t look healthy. If it had been I would have scooped that one up for another friend. Because that’s what the plant addicted do, we watch out for each other.