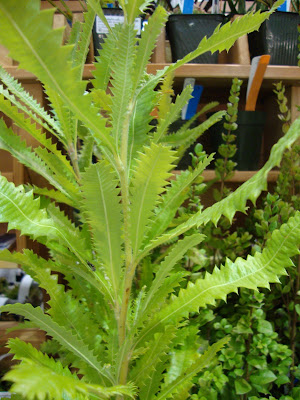 How disappointing! I was so excited to purchase this Banksia serrata from The Desert Northwest when I visited the NWFG Show in February. Its bright green serrated leaves were featured against the dark brown paint in my post about our new house colors. 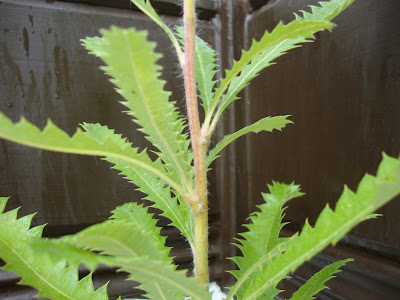 And I had been scheming on which container to plant it in as soon as I had a chance. But then this happened! 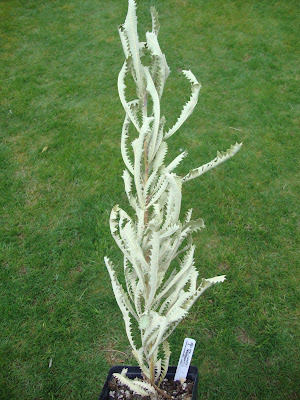 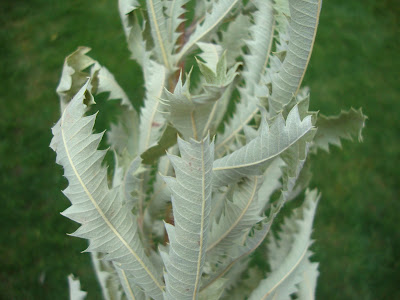 It happened almost literally over-night. Later in emailing with Ian, owner of Desert Northwest (and admitting I had killed his plant) I learned this: “Proteaceae hate being indoors, and under lights, and are not at all drought tolerant in pots. Leucadendrons and Banksias are a little less fussy but still... I've had better luck keeping them outside through 30 degree windy weather than in dark, shady, heated spaces.” 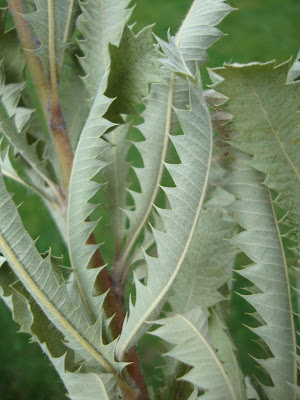 Which goes a long way to solving the sudden death of the Leucadendron salignum 'Golden Tip' I bought at Cistus in February of 2010. Wasn’t it gorgeous? 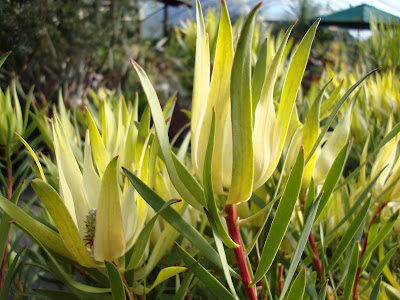 It looked fabulous and then again, over-night it was dead. Of course it was also cold outside and so I had it in the basement under lights. Consider this a warning for any potential Proteaceae purchases….don’t keep them captive indoors! These guys need roam free, soak up the sun and enjoy a little air circulation. No doubt they both also fell victim to my watering neglect. I've gotten so used to not watering the plants (agaves, aloes and other succulents) I'm over-wintering indoors that I fail to water those that need it.

If you aren’t familiar with the Desert Northwest you really should check out the website. One of my favorite parts is the section of extensive articles written by Ian, like the one called Pacific Northwest Grevilleas Revisited. I’ve never been to the nursery but it’s on my “someday soon” list…and I will definitely be replacing my Banksia when I’ve there.