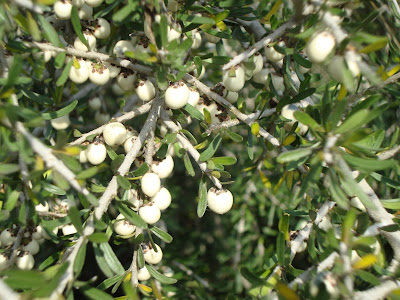 I recently experienced the thrill of finding an elusive plant, in this particular instance the hunt was made even more difficult by not knowing exactly what it was that I was hunting for. Turns out it was a Hymenanthera alpina. On January 21st I posted these pictures as part of a post on a local garden, and asked if anyone could identify the shrub. 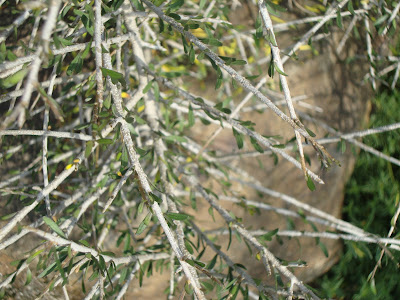 The Desert Dweller shared a few possibilities, all of which were interesting plants but not “the one.”

So last week, overcome by spring fever and a need to get out and about, I ventured to the Division Street Portland Nursery (it’s a little bigger than the Stark Street Portland Nursery which is closer to my home). Wandering through the “shrubs” area I saw it from a distance and my heart leapt (seriously). That mass of dried up dead looking sticks had to be it! And it was. 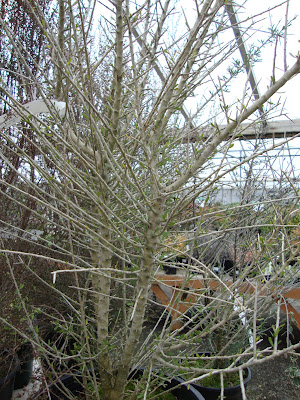 Hymenanthera alpine! They had exactly 2 of them. One HUGE and close to $50, one not so huge and half that. You can guess which one I got…Ha! I wish. No I got the smaller one. 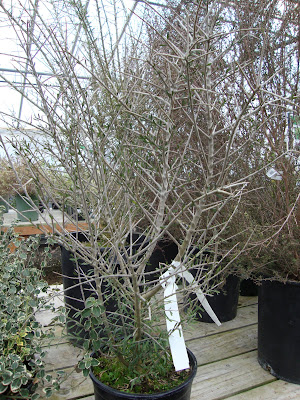 But I was so happy!

Naturally it was a Xera plant, here is the tag text: 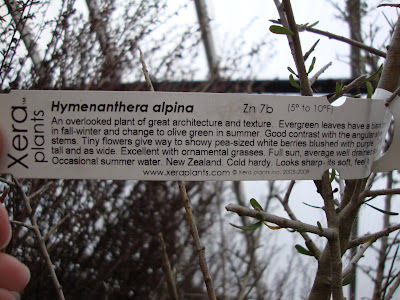 And when I did an internet search Joy Creek (another FABULOUS local nursery) came up, here is what they have to say:
New Zealand. We grow Hymenanthera alpina for the complex layering of near-naked branches and the bounty of persistent white berries that decorate those branches. The sparse foliage is dark green and yew-like spiraling in a loose arrangement down the branches. The branches are ash gray and very visible. Although we were told this requires male and female plants to bear fruit, that has not proven to be true. We have grown this successfully in a low water gravel border and in a dry part shade setting. Early summer. 6 ft. x 3 ft. White flowers. Sun, Part Shade, Zones 8-10 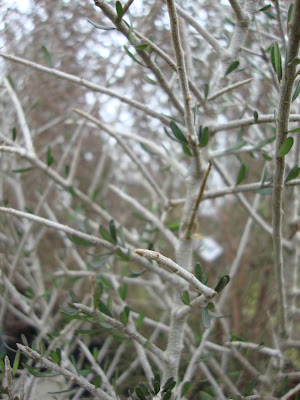 So as my giddy excitement subsided and I returned to reality I realized I was feeling a bit of déjà vu. Had I seen this very plant here before? Well yes I had. I even posted about it back in March of last year (http://dangergarden.blogspot.com/2010/03/otherportland-nursery.html) evidently the old saying is true. You know…the one about having to be exposed to something three times before you really notice it. I am just so glad I finally noticed it, and now I have it for my very own. 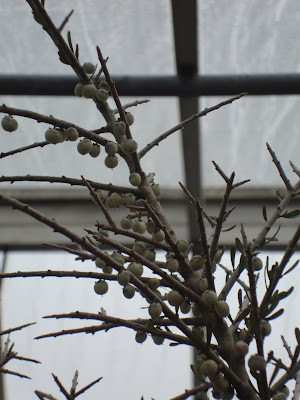