On Monday I talked a bit about my apartment gardening past, even though I have fond memories of those days none will ever match the feeling I had when I finally owned land. A home and garden that was all mine! I guarantee you that nobody has ever been more ready to own their own home than I was, the sheer joy of it all was overwhelming.

I bought my little house in Spokane in the wintertime. There was snow on the ground and the lady who had called the house home for all of its 52 years had passed away, sadly I couldn’t talk with her about what was growing in her garden. I was fortunate however to get to meet and talk with her nephew, the executor of the estate. We even shared a toast with his uncle’s whisky…how cool is that!? I learned that Rosa had suffered from Polio most of her life and depended upon her family and friends to tend her lawn and garden. So while everything was neat and tidy it was also a blank slate. I inherited a couple of trees (a Fir so tall you could see it for miles, and a Locust tree) several Mock Orange shrubs, a tall gangly deep red rose (which I left, and loved), a small patch of Lilly of the Valley, and a lot of lawn. I should also add I had the most profound sense of well being in that house; there had been so much love there that it was still working its magic.

The huge lot on which this tiny house sat had a most unusual feature; along entire south side of the property was a naturally occurring wall of basalt rock. Spokane’s South Hill, where my house was located, features many fabulous basalt rock formations just busting up out of the ground. My rocks were covered with sedum, ivy, juniper and Mock Orange. Here is a scanned photo taken that first spring, I am facing southeast. Aren’t the colors of the sedum divine? 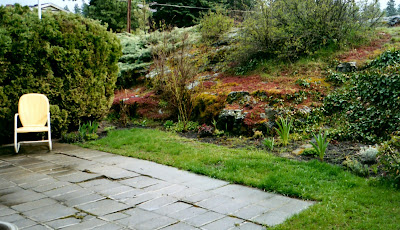 I had started to dig the grass out a bit at the base of the rock and begun planting. I soon learned that strip of grass was growing in about an inch or so of soil over more rock. There was no keeping it green once summer hit, as it baked from underneath. Luckily there were several pockets of deeper soil where I could plant. In this garden you didn’t decide where to plant; you planted where the rock let you. Did you notice the rollercoaster effect to the patio? I got used to it.

This is next photo was taken standing on the patio looking west. 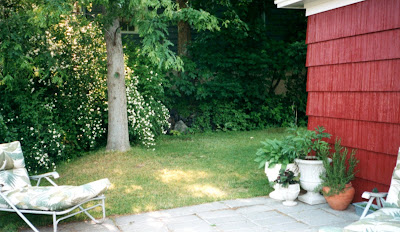 Those containers came with me from the apartment. You can see the trunk of the Locust tree and the Mock Orange is in bloom…I wish you could smell it, just heavenly. You can also see a corner of the house; yes it really was barn red. Evidently Rosa and her husband moved to the city from rural Eastern Washington and she had the house painted and repainted that color to remind her of what she left behind. I left her rose growing in the garden in her honor, but I couldn’t leave the house that color, it had to go.

I had so many plans for the changes I wanted to make to the house and garden, but living alone I only had so much energy, and so much money, to go around. Looking back I see now all the improvements I was able to do hardy made a dent, but then that didn't really matter did it? The important thing was the doing.

Here you are looking out from under the carport just outside the kitchen door. The house has been painted and I’ve removed the strip of grass between the patio and the base of the rocks. 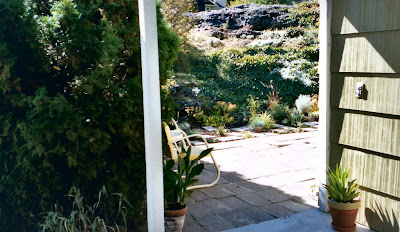 Wait…I should say we removed the strip of grass. By now I had begun to date Andrew (my husband) and he helped with the project (and the house painting). Do you think the fact that he spent his Sunday helping me dig sod and bury cement blocks in my garden, at my house, has anything to do with the fact we are now married?

Here I am standing on the patio looking back at the house. Notice the agave on the left (actually it’s in the above picture too, it gets around!), I’ve still got it! 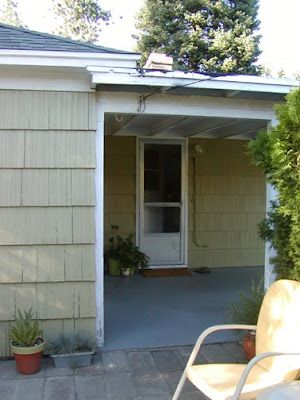 Here is a better shot of the area next to the patio, photo taken June 2004 (can you tell I finally got a digital camera?). It looks a bit silly to me now but I was very proud of this design at the time. The goal was to sort of extend the patio while also providing pockets to plant in. I wonder what it looks like these days. 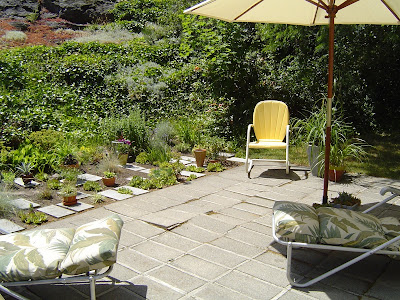 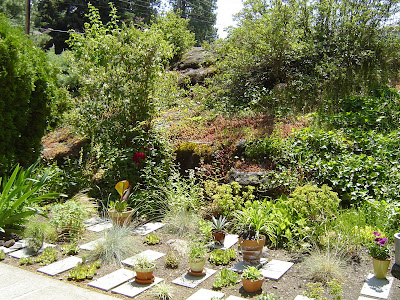 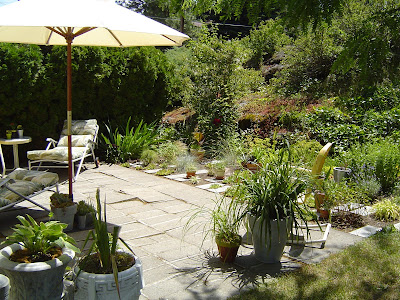 Here we are in the front yard (below); if that arborvitae next to the carport were gone you would be looking directly at the patio. As much as I hated it (the arborvitae) I also loved the privacy it provided. 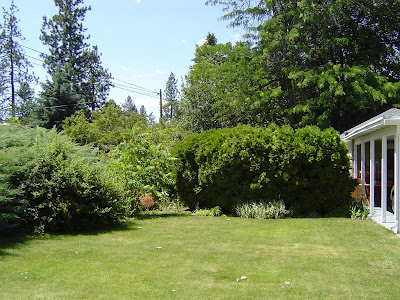 You can’t really tell from the picture but I spent a lot of time cutting out the dead bits at the bottom of the arborvitae shrubs and digging out sod in front to create a planting bed. The green mass on the left is the juniper (?) growing on the front half of the rock wall.

Here is the front of the house. Another sod digging project along the front sidewalk provided a area to plant several Kniphofia and Blue Fescue. In a container to the right if the large window is a blooming Yucca. 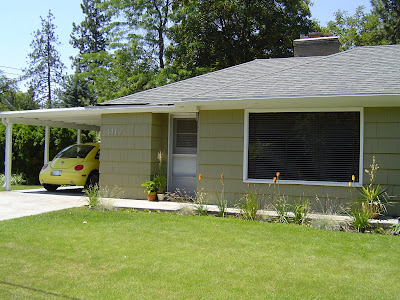 This house is located just blocks from a huge park, which meant lots of people walking by and stopping to talk. It made me happy when they looked at the color I painted the house, and the plants I had planted and asked if I had moved up from the desert Southwest.

So there you have it, I wish I had better pictures of the amazing rock wall. It was wonderful to climb up to the top, sit and survey the neighborhood, and look down on my little slice of heaven.