I remember when…thoughts on beginning to garden and advice I would give.

Recently Steve from The Rainforest Garden asked “What advice would you give a new gardener if you had the chance?” Reading his post got me thinking back to when I was just starting to spend my weekends at nurseries, picking up gardening books and magazines, and tending a garden on the windowsill of my Seattle apartment. And then later, when I moved back to Spokane, WA, and gardened on my apartment porch and eventually the happy days when I actually owned soil and felt like a “real” gardener.

I found these memories repeatedly creeping into my thoughts over the last few days and I had to write them down. I thought of things I wish someone had told me, or I had thought to ask. Of things I wish I could go back and tell the young me, and things I would want to tell someone else if given the chance. Of course once I started down that path was in the basement digging through a box full of old photographs, from back in the days when we actually had to develop film. Following is my "advice" (not that I'm an expert!), accompanied by a few photos, some scanned so the quality is less than ideal. 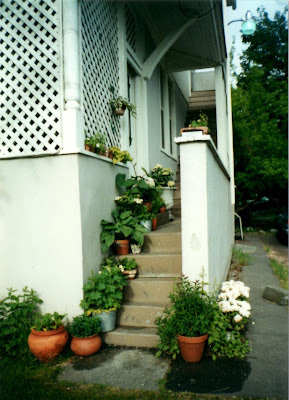 Containers are a valuable tool, use them. If you don’t have earth available you can always plant in a container. They can also act as a half way house for plants you aren’t sure where to place, they are a movable home for the less than hardy, and they are a way to garden when your current location isn’t long term (renting). The photos above and below are of my apartment container garden. Not only did it give me great joy but it beautified the back of the building and gave people walking by something pretty to enjoy. 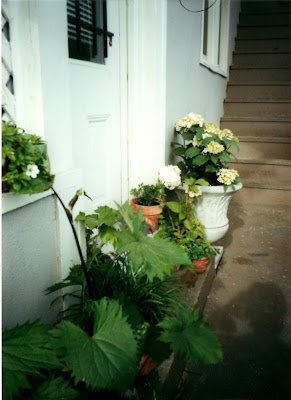 On the flip side just because your renting, or you know you’ll be moving soon, you should still plant! Plant for your enjoyment, however brief, and that of future tenants or owners. During the time I was living in that apartment I was infatuated with Queen of the Night Tulips, I bought several dozen and planted them around the side of the building and at the base of my stairs. I enjoyed them the following spring, and for several springs after whenever happened to drive by. It made me smile to know that I had planted them.

Just put it in the ground, you can always move it later! I have memories of being paralyzed with planting fear when it came to putting my first “expensive” (at the time) plant in the ground. It was a Peony and I was placing way too much importance on the act of planting. Putting it in the right spot meant sure success for the garden as a whole, putting in the wrong spot, certain disaster. As it was I ended up putting it where I was constantly hitting it with the hose.

If the plant is at risk of damage where it is, move it! See above. I broke as branches off the Peony as ever managed to grow.

It’s ok to say “no thank you” when someone offers you plant divisions. If you are a new gardener chances are you might be a new homeowner too, and you’ve just spent a lot of money. It’s tempting to take ever free plant you’re offered, but it really is okay to say no. Pass-along plants can often be invasive plants, avoid those! (internet research will help you know). Or maybe someone’s idea of a great garden plant (their favorite Rose for example) doesn’t fit your idea of what you want to for your garden. This can be awkward, but if you are polite and don’t always say no most people will understand.

Follow your vision, listen to the advice of others but don’t let it steer you away from discovering your own path. One of the first gardening things I did at my first home was tear out the Dusty Miller in the front yard. I hated it. A well meaning (I hope) neighbor came over to tell me those were well established and drought tolerant and I should have left them, and then proceeded to lecture me on installing a xeric garden. I was intimidated to say the least.

Keep the plant tags (but please not in the ground next to the plant). When we moved to Portland I brought several plants from my Spokane garden with me, but stupidly not the tags. I tossed them all out. I regretted that and have kept every tag from the plants I’ve bought since. Those tags have valuable information on them! As for how you chose to store the tag, or record the information, that is a highly personal choice…pick a system that works for you (picture below of my tag notebook). However I beg you to NOT stick the tag in the ground…your garden ends up looking like a cemetery or yard sale, plus the information ends up illegible over time. 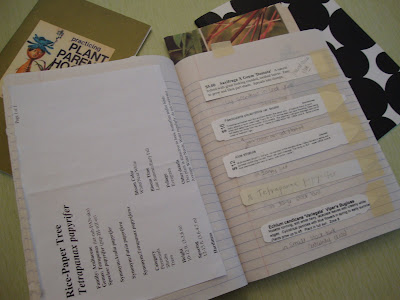 Don’t be afraid to try something completely new and different, but learn from your mistakes. Shortly after we moved to Portland I discovered a huge Agave growing in someone’s front garden not far from where we would eventually buy our home. I was ecstatic! Agaves can grow here! Shortly after we moved in we visited Cistus Nursery and I bought an agave. It went into the ground and looked fabulous, until winter and the rains came. It turned to mush. Of course, our soil is clay and has extremely poor drainage. I did nothing to compensate for that. I learned.

Learn what your soil composition is, and do something about it. (see Agave death above).

Don’t be afraid of Latin. Truth be told I still struggle with this one – after all who wants to sound stupid by saying a name wrong or repeatedly having to say “I have no idea what you are talking about” but by not trying (and being corrected, hopefully nicely) you will never learn.

When it comes to design…

Visit other gardens and take pictures/notes of things that inspire you. This first picture is from a trip to the Buchart Gardens in British Columbia around 1996. At the time I was living a small Seattle apartment in a very urban neighborhood, I was blown away but the concept of so much space given over to plants. 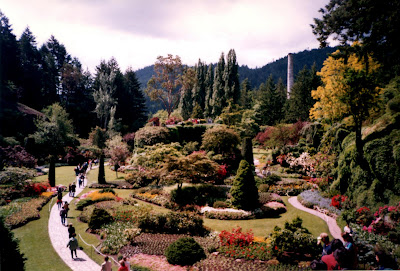 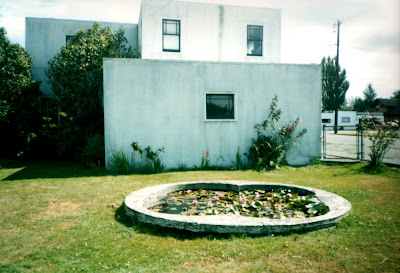 Sketch your ideas, even if you don’t think you can draw. This helps you visualize the space you are working with in different ways, and is especially helpful if you can do the drawings to scale. Plus it’s fun to go back and see how your original ideas might differ from the end result. I did this drawing when we first started planning our patio. Note my particularly detailed drawings of plants (ha!), and originally I wanted to leave a few squares void of pavers on the patio with the intention of planting in those areas. Now I am glad we didn’t go that route, too restricting! 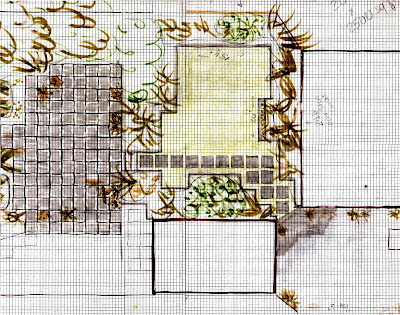 Winter is for learning. Winter is a great time to read and scheme and there is so much information available…books, magazines, blogs take advantage of it all!

Blogging on this subject has got me reflecting on all of the gardens and gardeners in my past that have influenced me. I’m sure I’ll be revisiting this topic soon; in fact I gathered several pictures of my home and garden in Spokane that I want to share.

It was so interesting to go back and look at that place where I invested so much of myself, and then left it behind. Well, not completely, the car we towed behind the U-Haul was stuffed with plants dug from that garden now planted here. Which actually is my last bit of advice…take something with you when you leave a garden. Pictures are wonderful but having a plant that has been with you through a move (or many) is a lovely bit of continuity. The Ligularia in the middle of the second photo above (from the apartment container garden) is now thriving next to our garage here in Portland (photo from August). 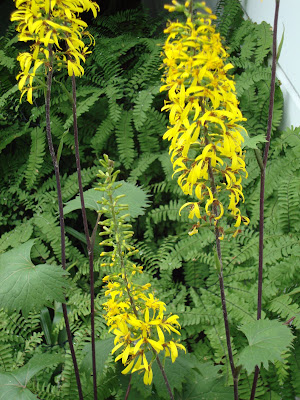 And the green Liriope in this picture… 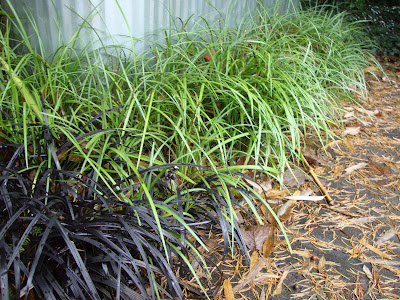 Has been with me for more than 15 years, through 5 moves…10 years in a container (yes, it was a little root bound) and finally getting to spread its roots in this garden. Who knows maybe someday it will end up in that Zone 9 garden I dream of...