Reading the local newspaper the day before the YG&P Show opened I learned this year’s show almost wasn’t. Evidently the show got to be too much for the Oregon Association of Nurseries resources and staff to handle. I was completely aware we almost lost the NW Flower and Garden show in Seattle but I had no idea that our YG&P Show was in jeopardy too! Luckily a new group of volunteers stepped up armed with new ideas, partnerships and the conviction that the show must go on! Thank goodness they did, February just wouldn’t be the same without the show. The seminar series this year was one of the best, I am so glad that I made it to so many of them!

Lucy Hardiman was the first speaker I attended on both Friday and Saturday. What a great way to start the day. Lucy is an energetic speaker and always comes armed with tons of great images to share. In both seminars she shared photos of Lauren Hall-Behren’s Lilyvilla Gardens, a garden I was fortunate to visit on last summers ANLD tour. Knowing how fabulous that garden looks now I was I completely blown away seeing the before pictures.

Both Friday and Saturday Lucy was followed by Mr. Dan Hinkley. I was prepared to stand in line to hear the famous plant hunter speak but it turned out to not be necessary, I was able to walk right in and get a seat. You gotta love it! And what a great speaker! He started out Friday’s seminar about his personal Garden, Windcliff, by sharing a photo of the first garden feature he and his partner installed at their new garden… 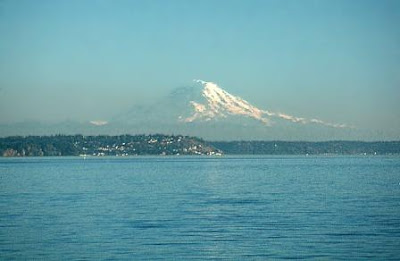 Yes, Mt Rainer (with the Puget Sound in the foreground), not bad if you can get it! (photo borrowed from http://www.ramblewithme.com/). Both of his talks were peppered with great quotes and fabulous pictures. Every other line seemed to start with “here is a (name of plant) that I collected in (name of exotic place),” can you imagine the stories he has to tell? One of the most exciting groups of plants that he shared were the hardy Scheffleras, wow, such great foliage! (photo from Wikipedia) 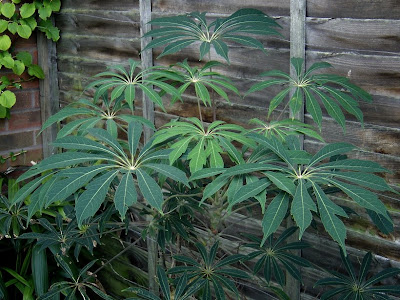 He also shared a photo of gold spray painted Gunnera leaves, saying that when the leaves get tattered in the late summer he spruces them up with a little paint. I kept expecting him to laugh but he didn’t (I think he may have been serious). And when talking about his preference for lacecap Hydrangeas over the mopheads, his reasoning was that he just can’t trust a 10 lb flower.

Always entertaining, Sean Hogan imparts amazing bits of knowledge as though he were talking about the weather. In his talk on ‘Bold Textures for the Small Gardens’ we were treated to marvelous pictures and a take home list of plant names, great when you aren’t really sure how to spell Caesalpinia yunnanensis but you want to remember it. He also shared a sure fire way to remember the difference between a Datura and a Brugmansia, The Datua are the “pointy uppy” ones and the Brugmansia are the “hangy downy ones,” who can argue with science like that?

Dan Heims from Terra Nova had several beautiful images of plants that thrive in the shade, or actually the various degrees of shade. He also threw out a tidbit regarding green flowers and says that they last longer than flowers of other colors due to the chlorophyll present in them. Interesting eh?

Burl Mostul, the owner of Rare Plant Research, took us along on a recent trip he and his wife made to South Africa. One of my favorite images from that seminar was one that he called “the Euphorbia forest,” it really was! He also talked about the hoops that he has to jump through to bring seeds back into the U.S., first he collects them in the wild, then he gives them to a local nursery (in this case one in South Africa) and they then turn around and sell them back to him, then they are legal!

The last seminar I attended was a talk by Ciscoe Morris. This guy is so energetic and excited about gardening that he could turn even the most skeptical anti plant person into an eager gardener. His talk was on tropical-ish plants and he had a great rip for mulching them to overwinter, use fern fronds. They are plentiful and naturally repel the rain, helping to keep what you are protecting dry and less likely to rot in our wet winters; they also allow a little air circulation.

In addition to everything I learn from the speakers I also find that sitting in these seminars acts as a sort of garden meditation. I not only fill my notebook with wisdom from the speakers but also fabulous ideas and sketches for my own garden that seem to just flow from my mind. Now the trick is to getting out there to implement them!