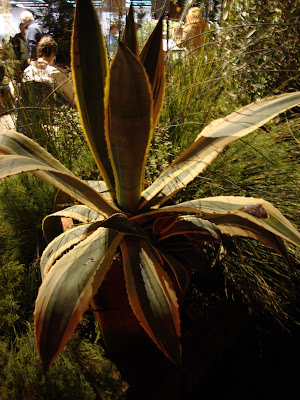 Followed by this branched Yucca (rostrata I believe)… 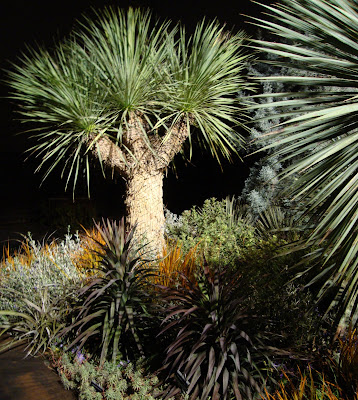 And this Yucca whipplei! Do you know how badly the danger garden needs this plant? VERY BADLY. 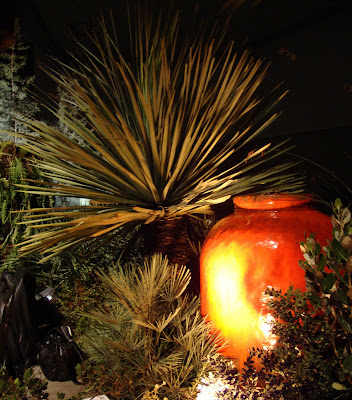 Clearly I was in spiky heaven; it turns out in-route to the powder-room I had walked right into the Cistus Nursery Display Garden. Does it get any better than this? Welcome to the 2010 Yard Garden & Patio Show! 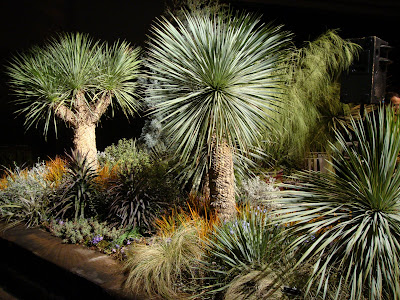 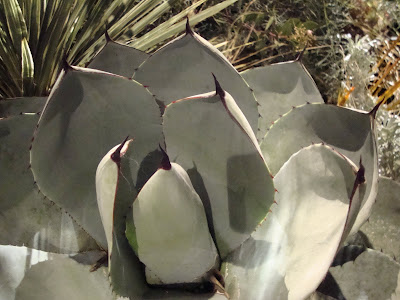 However, there was trouble in paradise. The very best display garden with the most interesting plants (in my humble opinion) was stuck in the darkest corner with musicians blocking access to many of the plants, I needed to get up close and touch the plants, but I could not. Thinking this was a temporary mistake that would soon be corrected I went back later, and later again. Each time the pesky violin players were right there in the middle of the display! Now don’t get me wrong, I respect the violin players but they shouldn’t be in the way of my spiky plants! Who ever placed the musical talent was not thinking (this was a show feature, not part of the Cistus display).

I was excited to see these Yucca aloifolia 'Blue Boy', very similar to the Yucca A. Purpurea I purchased last fall at Tsugawa nursery, in fact I suspect they may be the same plant since I can’t find any information on A. Purpurea. 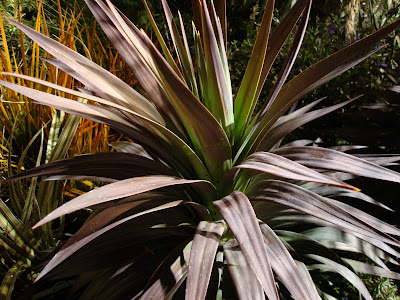 I asked the guys manning the Cistus booth in the Green Market (where you can buy plants from multiple vendors) if injuries were sustained during installation of the garden, they both laughed and shared stories of cuts, pokes and bruises. True danger gardening!

Several fabulous Manzanitas were also featured in the display, like this Arcostaphylos visicida, or hoary Manzanita. 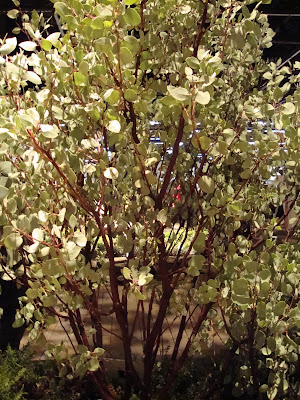 I feel in love with this Sedum palmeri it looks more like an Echeveria to me, but it is a Sedum and it is hardy to zone 7! 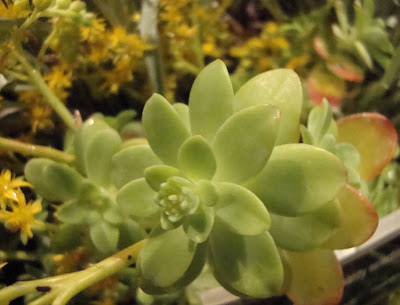 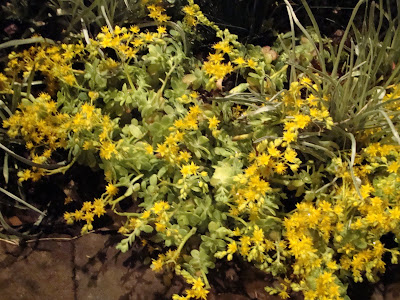 There were also many fabulous Restios but I was unable to get a good picture of any of them.

The next garden (sponsored by Hughes Water Gardens) featured a huge pond with a large dragonfly creature suspended above and other creatures around the edge of the pond. It was a hit with the kids but it kinda gave me the creeps. 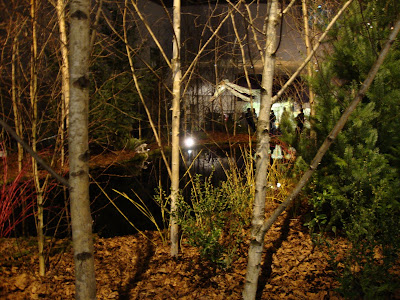 I did appreciate the mulch of dried leaves, usually the scent of bark mulch at the show is overpowering, it was so nice to have less of it this year. 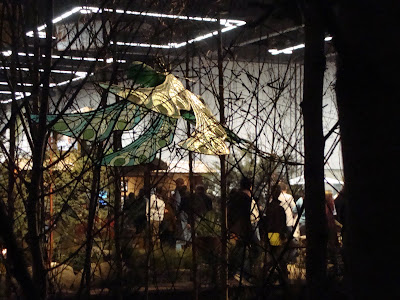 In another garden these rustic wood stump-stools caught my eye. Very creative eh? 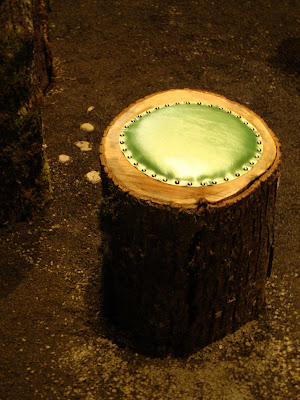 Show sponsor Dennis’ 7 Dees nursery had these fabulous rusted metal containers in their display garden. They seem to be telling people you don’t have to grow vegetables in the ground, any large container will do. Great message. 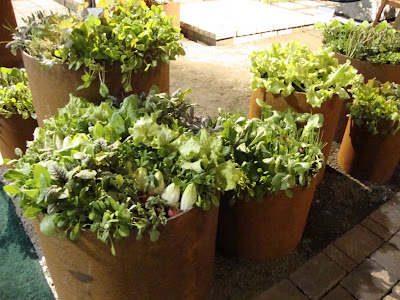 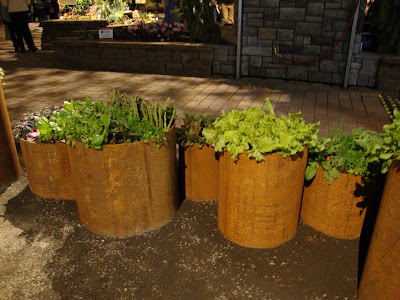 And they also got into the agaves and succulents craze. I could very happily work a few of these containers into my garden! 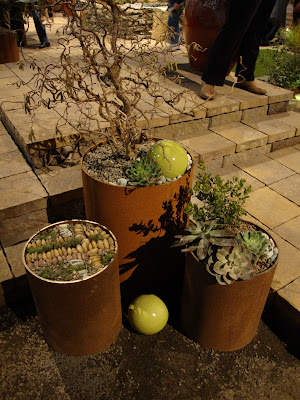 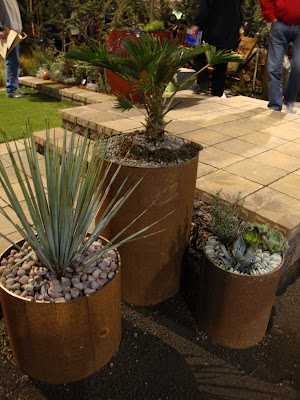 In another display there was the requisite waterfall… 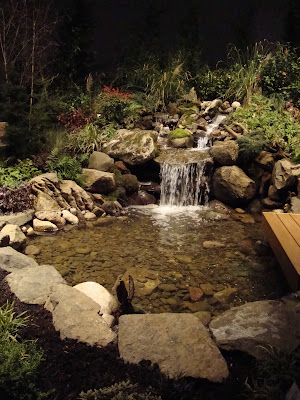 Although I liked this version much better. Look at that sexy wall! (sorry the picture is so blurry) 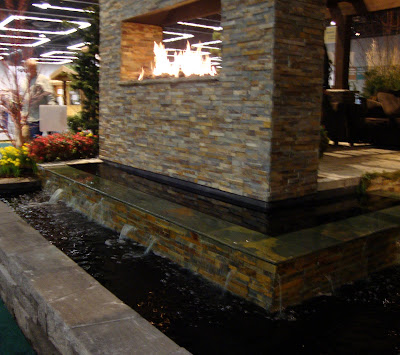 All in all I felt the display gardens in the 2010 show reflected the times. Gone was the completely over the top “showmanship” and huge expensive temporary displays of past years, things were still big and bold but just a little less so. Later in the day as I wandered the show floor I was struck by the restraint of the booths. Most nurseries cut back on their booth size and inventory, and some were gone completely, it felt like everyone is on a reduced budget, not just me! Talking with a few nursery owners they shared frustration about the past years sales figures and concern about what this year holds. It’s universal.

Lots more on the Seminars, the Booths, and the Green Market later in the week…