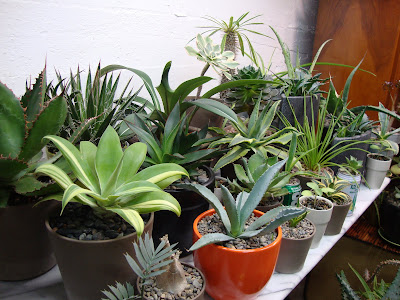 I don’t have a real greenhouse so I bring my tender agaves, aloes, succulents and such inside for the cold wet winter. They live in the basement under grow lights. It stays fairly cool and I rarely water, they aren’t thriving but they are getting by until they can return to the warm sun in the late spring. The larger pots and the hardier plants stay outside under the shade pavilion; the indoor treatment is only for the small pots, truly tender plants, and a pot or two that may not be frost proof. 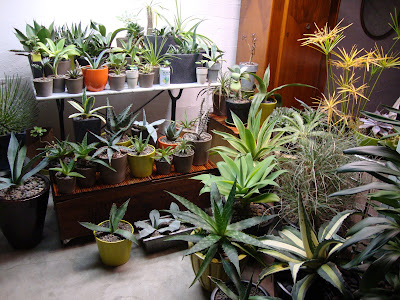 I usually check them weekly for signs of problems (bugs, dead leaves, etc) but this winter they went for a couple of months with very little care. Getting downstairs with a broken ankle was a rare occurrence, so I was a little concerned about what I would find when I finally tackled the job looking over each individual plant. As you can see, this is no quick affair; it took the better part of an afternoon.
The Aeonium Schwarzkopf is holding up nicely. It’s lost a lot of leaves (I almost called them petals because it’s so tempting to think of these as flowers) but still looks healthy. 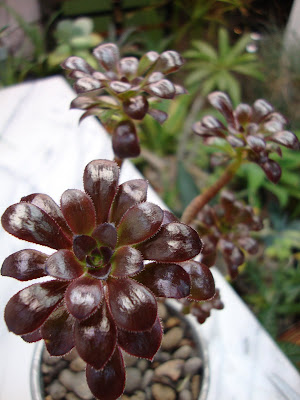 This is the first winter that I’ve left an Umbrella Palm outside (planted in a stock tank planter), hopefully it will return. Just in case I brought this one inside, it’s my insurance plant. Some of the older shoots are turning yellow and I should cut them off but it’s still sending up new green ones too. 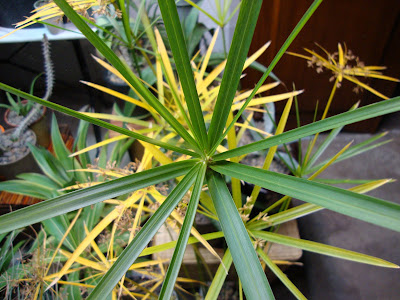 Luckily there was only one sign of an infestation. On the Sedum around this purple Echeveria…I sprayed it with Neem Oil but I think it was too late and the Sedum needs to go. The Echeveria is fine (except for a little unfortunate overspray that dotted the leaves). 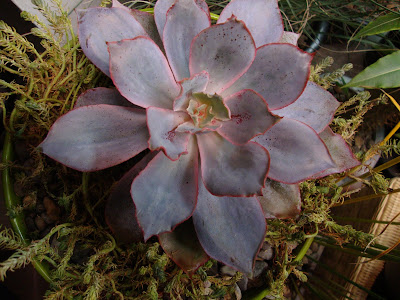 What I did find was a lot of babies! These plants have been busy producing pups! Aloe pups… 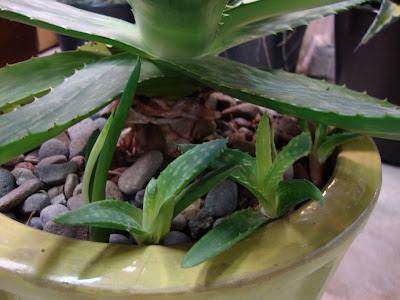 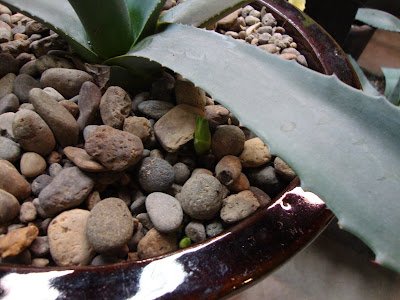 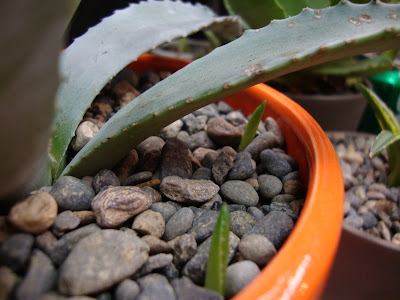 The pups around my Agave desmettiana were out of control! So I decided to separate them. 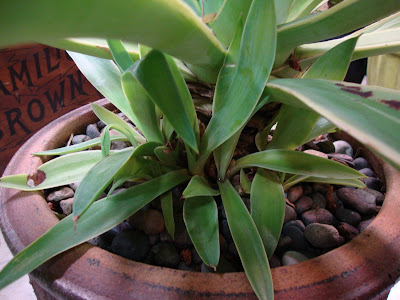 These guys grow so close to the mother plant that you have to work really hard to get roots along with the pup. 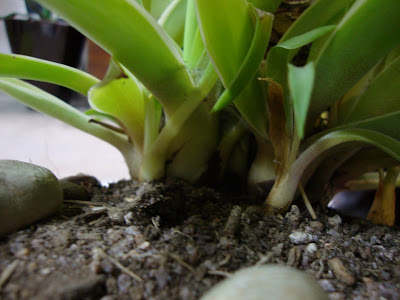 The smaller the pup, the easier it is to get roots. I would have thought the reverse would be true. 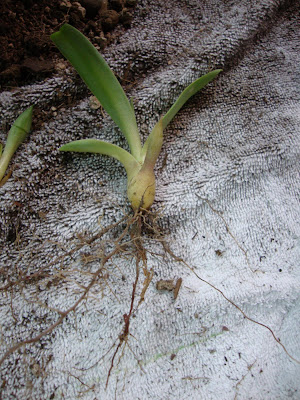 Not a bad litter once they are all potted up! 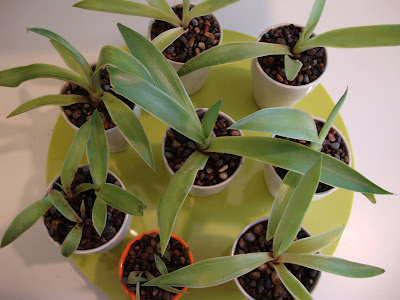 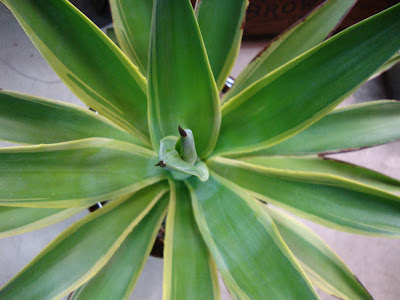 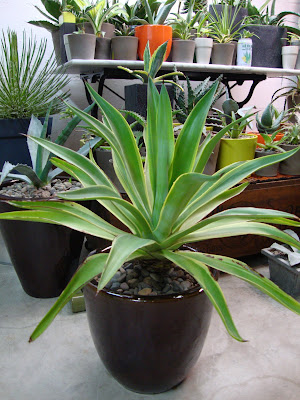 This Agave chrysantha has been very prolific. 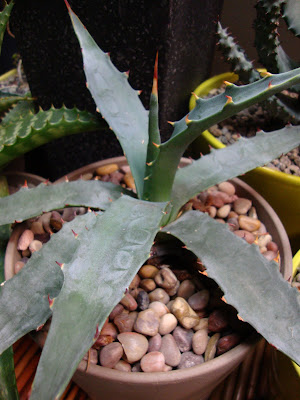 All of these pups came from that plant. There were only 3 small pups in each black planter when I first planted them. Obviously they’ve been busy too. 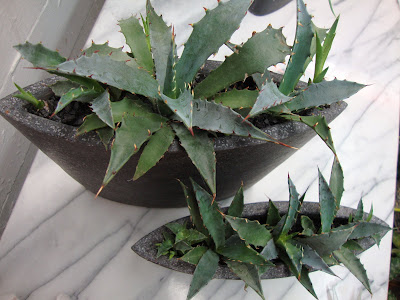 I really need to pull these and divide them before the start damaging each other, but that is a job for another day. 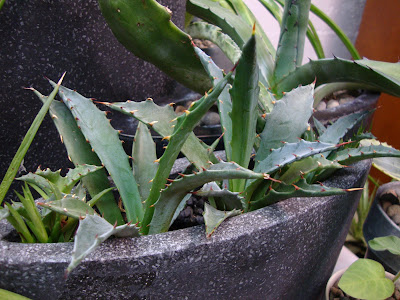 This Agave (unknown name from a gifted plant) gives real meaning to the word “spiky”, no wonder agave spikes were once used as sewing needles. 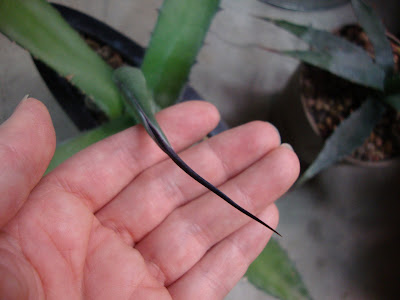 Before the cold weather hit I dug up these Datura seedlings (volunteers from a plant the year before). They still look good, hopefully I can successfully transition them back outside once the weather is reliably warm. There are a few “ifs” in our forecast for the coming week, talk of an Alaskan chill making an appearance. I hope it’s just talk. 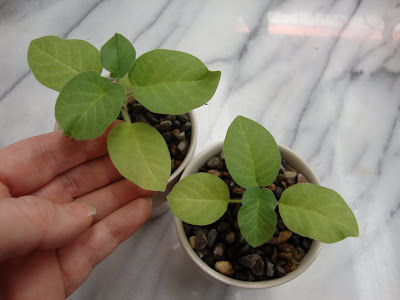 So what’s your method of overwintering tender potted plants? Do you take over an unused bedroom or have you made the jump to an actual greenhouse?