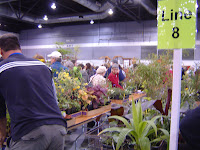 My parents came down from Spokane to spend the weekend with us and attend the HPSO sale. I warned them there would be crowds. I was not prepared for what we would encounter.

This is my 4th HPSO spring sale. I like to arrive early, usually this means big crowds, a price I am willing to pay to get the good stuff. Rationally I know the vendors have more stock to bring out later in the day but the idea of missing the first out just kills me. The venue was different this year, the sale was in the larger room at the Expo Center. I had wondered how the economy would effect the turn out, and if the vendors themselves would play it safe and not bring anything exotic or expensive. I was wrong to worry. The crowds were amazing and there were a few to-die-for exotics.

Our first stop in the door was Cistus, a little discouraging for my zone 5 gardening mother as they push the boundaries of our zone 8. We progressed along the rows and every 20 minutes or so I made a trip to the holding area. 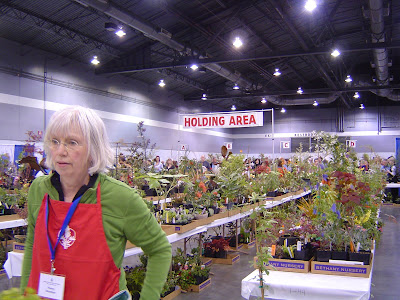 These people know what they are doing, you can drop off plants as you shop. When I made my 3rd trip to the holding area they had run out of space, every inch was taken, people were buying and buying big!

What I didn’t get: 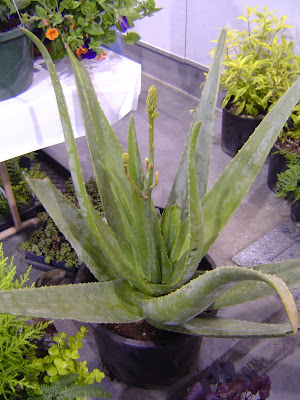 I managed to leave this amazing aloe behind. The $80 price tag was to blame. 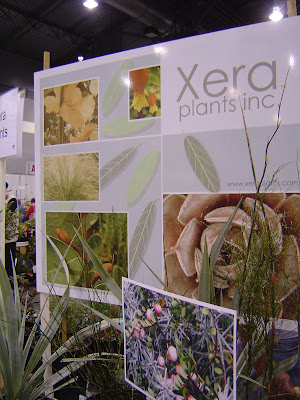 Xera was there; oddly enough I didn’t pick up a thing at their booth. 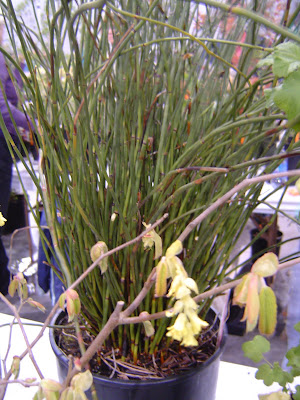 This nice big Restio was tempting, but at $42 I had to walk away - it is much cooler in person! 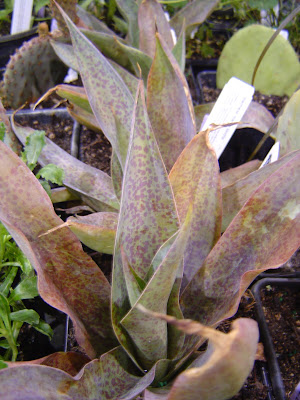 Having watched the bloom spike develop on Pam’s Mangave over on Digging I think I was just too jealous knowing ‘mine’ would never achieve such glory, thus I walked away from these too. However, since I fell asleep regretting it I don’t think I’ll make that mistake a second time.

And speaking of regrets, this seemed to be the year of the Eryngium agavafolium as they were in several booths. I picked up another, I managed to stop at just one though. My mom also got one, we are hoping it can tough out the Spokane winters.

Now this is where things got crazy, once we made our final selections and got in line we waited over an hour just to pay! It was insane, 8 lanes and 2 long lines feeding into them. I really have to thank my parents for being such good sports, mere mortals would have fled. In line everyone was in good spirits, as gardeners with new plants tend to be. We talked with a couple of volunteers about the record setting numbers. What were they attributing it too? Three theories surfaced:

1. Portlanders lost a lot of plants with our record cold, ice and snow last winter and they were out to replace them.
2. After such a long winter people just needed to get out and enjoy the idea of spring.
3. People were tired of the bad economic news and just decided to hell with it and wanted to spend!

No matter what the cause it was an amazing sight to see. So much money being spent on plants and all pumped into the local economy! Maybe there is a light at the end of the tunnel and this economic nightmare will end.