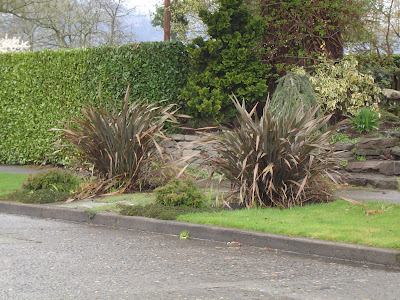 Okay – just one last post about the great flax collapse of winter 2008/09. After the snow and ice cleared, and I was able to drive around town again like a normal human, I happened by a pair of flax wrapped in insulation. It must have been a two person job, one person gathering up the leaves and holding them tight while the other took a roll of insulation (the kind with the silver foil backing) and wrapped it around like an insulation cinnamon roll. I could tell that at the center of the cinnamon roll was flax because there were a few leaves sticking out the top. The weather had warmed considerably when I saw them, so whatever covering they had over the top opening had been taken off, allowing the plant to breath. I made a mental note to drive by in a few months to see how the plants looked when the insulation came off.

Well - they look pretty darn unscathed don’t they (that's them up top)? If I hadn’t seen them prior I would have sworn they were planted this spring. Now I know. Maybe I could have saved my flax, all 17 of them (yes, it really is an addiction) if I had done this? Any maybe the Cordy’s too?