Before I decided to include them in my "October favorites" post, these first few photos were destined for a post called "you can't kill those things"... I'll explain...

Those tall trunks belong to my oldest Tetrapanax papyrifer... 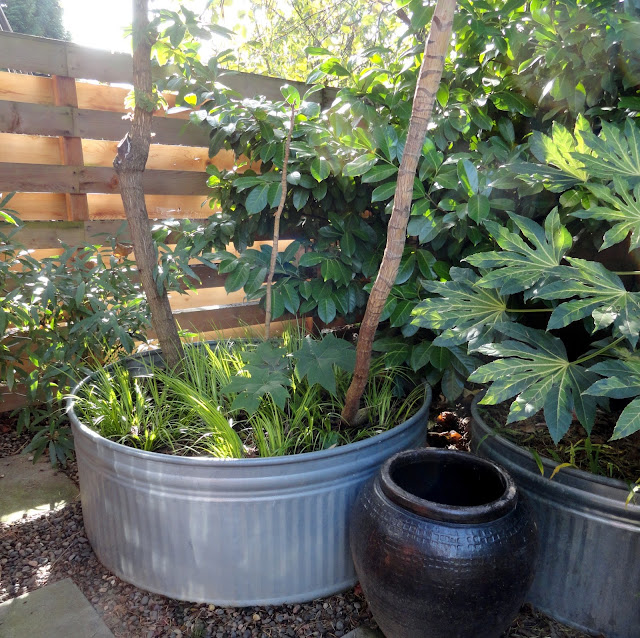 But instead of the lush, large, leaves that should be at the top, there is only this. 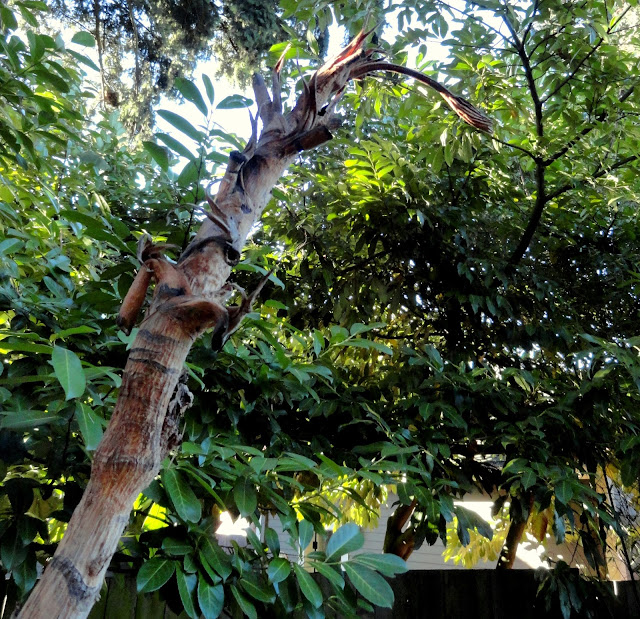 Not so pretty, eh? During the summer drought I thought I'd give them a nice, deep, watering by just letting the hose run in the tank for awhile. Just a short while! But when I returned I discovered a pond. Standing water that was not draining. I scooped out as much as I could but the damage was done. Over the next few days the large leaves wilted and fell off. 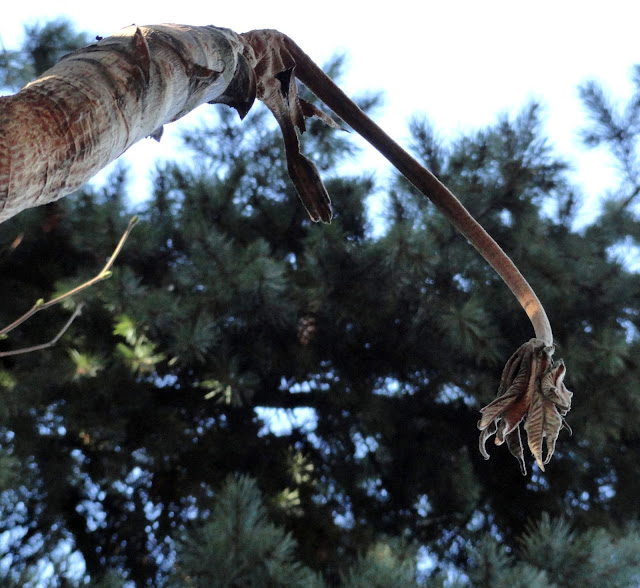 A couple weeks later I had friends over and my dear husband pointed out the sad Tetrapanax tank. Something I was quite happy to have let gone unnoticed, thank you. Sean (yes, Cistus Sean) quickly said "ah, you can't kill those things!" and then went over to give the trunk a shake. At which point one of the remaining leaves broke loose and fell to the ground. As though to tell him otherwise. 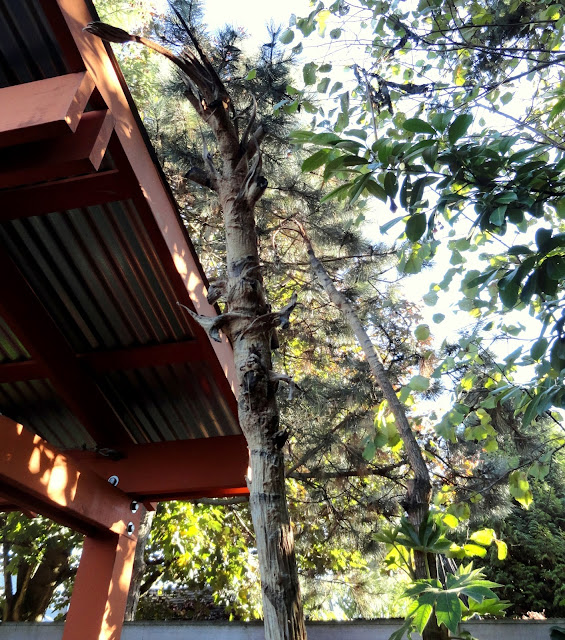 But....now there is this! While the leaves on my other (in ground) plants are turning a seasonal yellow these are pushing out bright green new growth like it's spring. And not at the top on the trunk but further down. 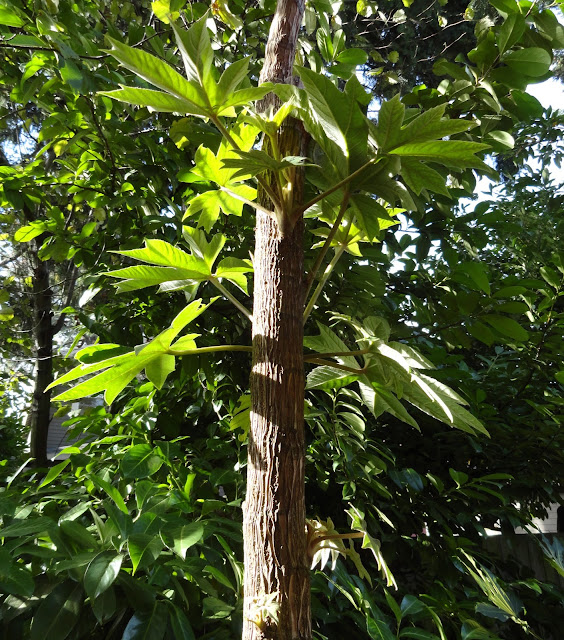 This same thing has happened previously, when a cold winter killed back the top but new growth pushed out lower. In fact here's where it first happened, in 2010, the "new" trunk on the left is kind of swallowing up the old scar. 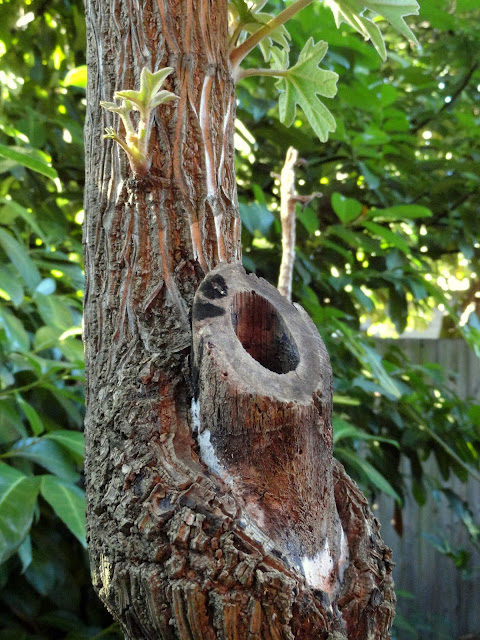 And there's another one, further up. I think that growth-point dates to the winter of 2013/14. 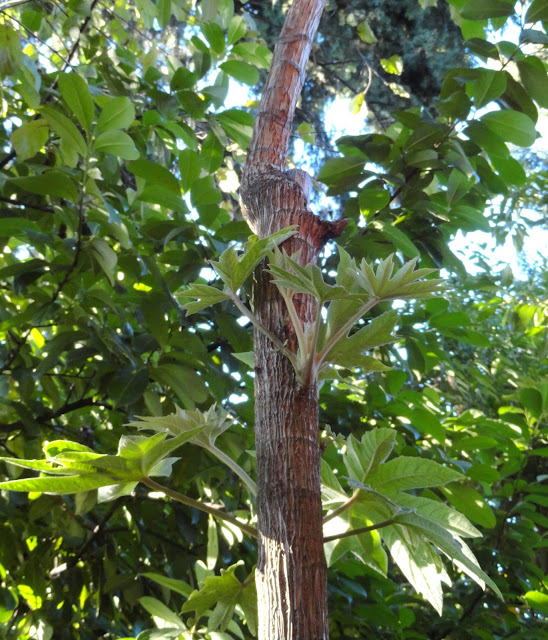 I won't cut back the old trunks until spring sometime, this tender growth will be zapped by frost and who knows where it will begin again. The important thing is there's still life in there! 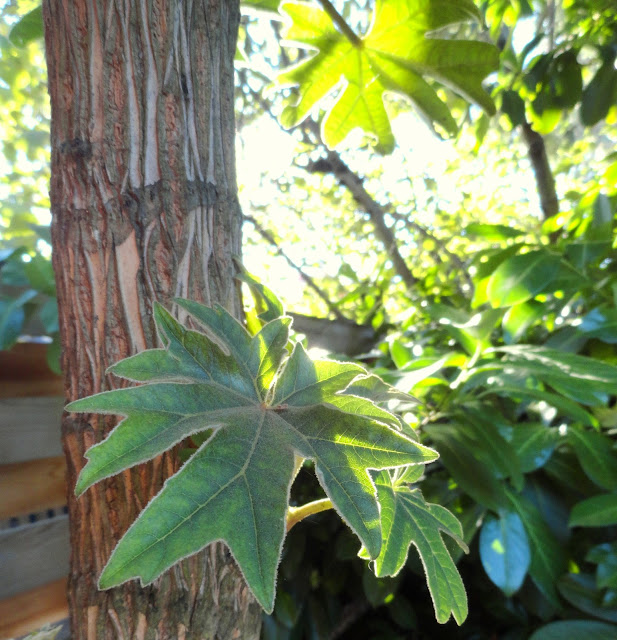 There are also new plants emerging from the soil, something else that has happened when the main plant is cut back over a winter. The moral of this fav? Sean was right, you really can't kill these things! 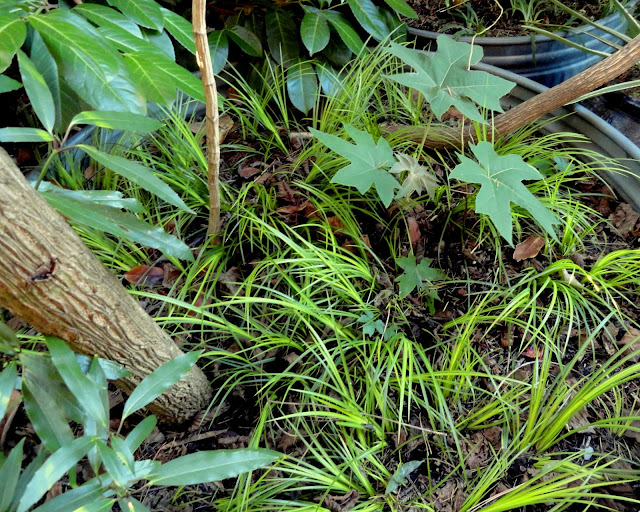 So...last weekend brought a break in our nearly constant rain and Andrew and I finally got the walls up on the shade pavilion "greenhouse" (I hope not too late, things are very wet!). As I was moving plants inside a brief sunny moment illuminated the Acorus gramineus 'Ogon' growing at the base of the Tetrapanax. 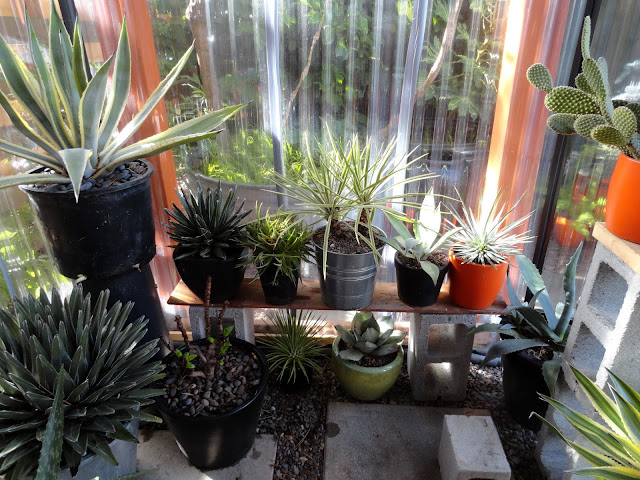 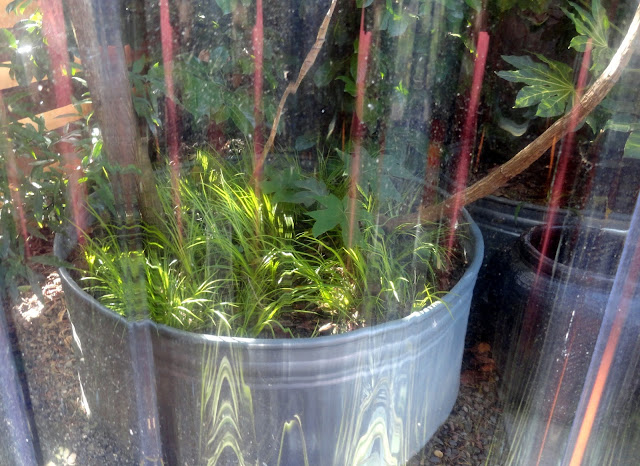 Planting the Sweet Flag here wasn't a considered decision. I was simply removing it from a place it was no longer desired and couldn't just toss it. Looking around I saw bare soil here and thought, why not? 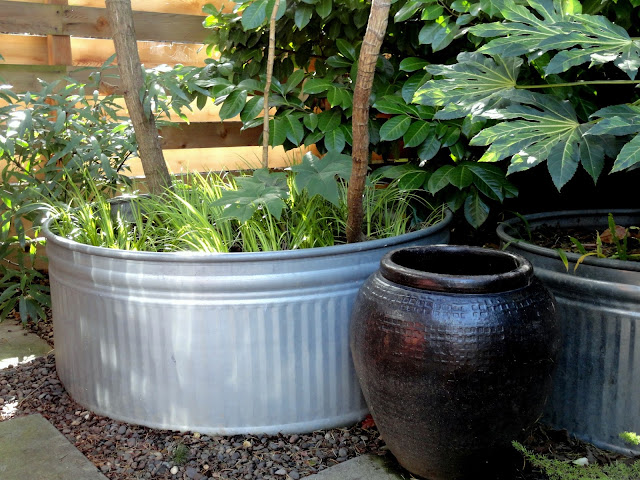 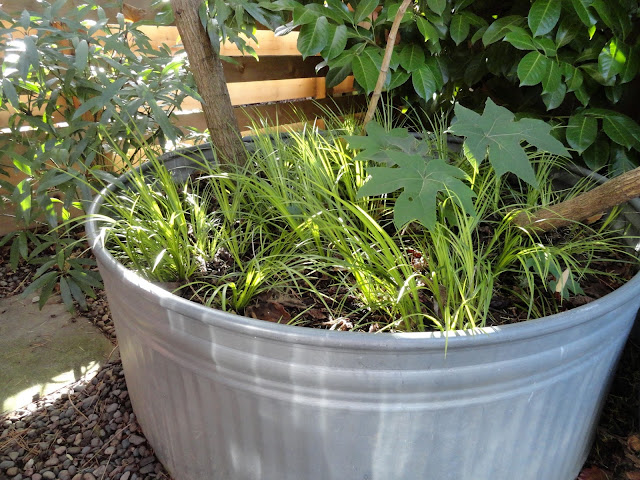 Stopping to appreciate that "grass" had me then glancing across the patio to the Liriope growing in front of one of the bamboo tanks. All of these plants came from the descendants of a 4"pot I bought at City People's Garden store when I lived in Seattle in the 90's. It grew in a container until finally being set free in 2005 when starting my Portland garden. This strip was planted with divisions during the spring of 2008. I mostly don't think about it when the patio is full of containers, but it shines during the winter, when the patio is empty. 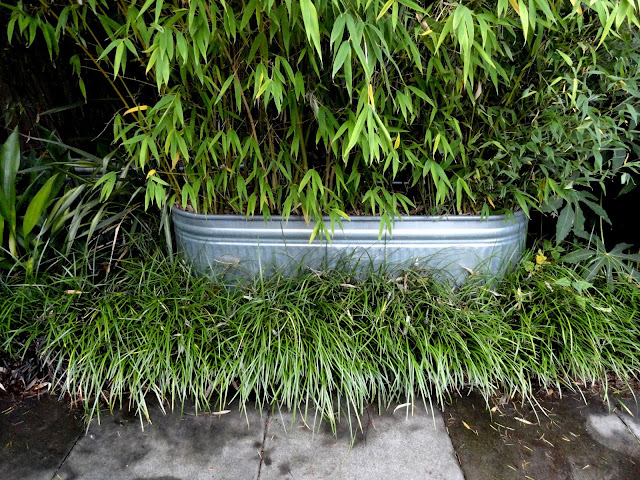 Here's another plant I'm admiring now, with fresh eyes. It's Asplenium bulbiferum, aka mother fern — because of all the babies it produces along its fronds. I bought this on a whim at the Farwest Show in August. Now that it's been potted up and had some of its older (heavy with tiny ferns) fronds removed it's looking really fabulous. 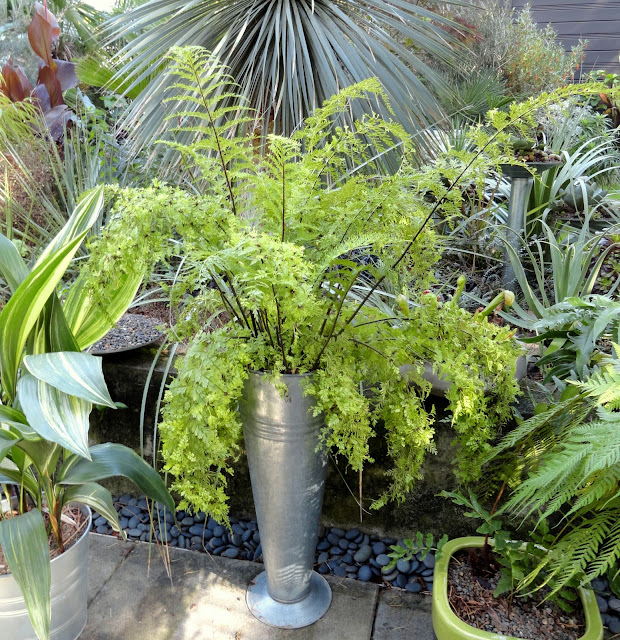 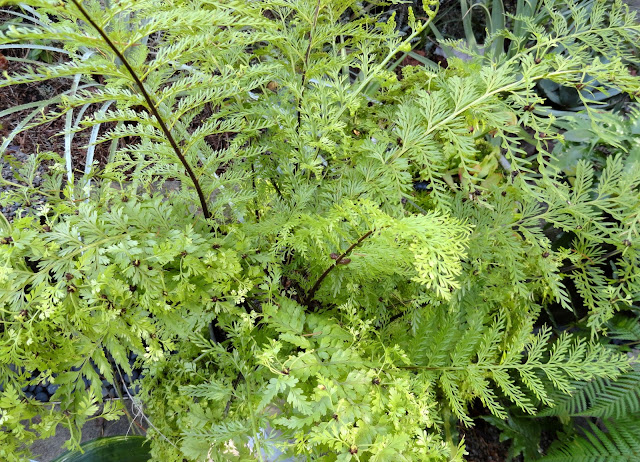 And finally Coniogramme intermedia ‘Yoroi Musha’. I picked up a pair at Secret Garden Growers last summer. And they're finally getting some size to them. I feel a major fern project coming on... 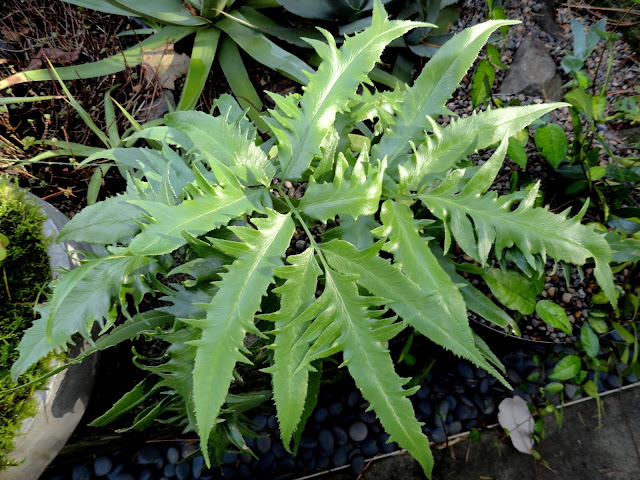 The stats on all these favs...

Tetrapanax: hardy in USDA Zones 7-10 (can resprout from the ground in colder climates), happy in sun to part shade with regular water (although my plants in the front garden get by on much less water than I would have though possible). Eventually reaching 8-12-ft tall, and spreading under ground to form a small forest (if you're lucky). Blooms late in the fall, but only in mild climates, in my Zone 8 the blooms are typically cut down by a freeze before opening.

Acorus (Sweet Flag): hardy in Zones 5-9, this grass-like perennial enjoys sun to shady conditions where the soil stays moist, even doing well in a bog or at the edge of a pond. Grows 10-12" tall and wide. Small inconspicuous blooms resembling tiny yellow cattails.

Liriope (I believe mine is L. spicata): Zones 5-9, full sun to part shade and regular water. Reaches a foot high but arches gracefully. Will spread underground to form dense patches. Small purple flowers form in the summer. I've heard of people mowing this plant to the ground in the early spring to get rid of the old foliage.

Asplenium bulbiferum: hardy in Zones 9-11 (comes from New Zealand), I'll be bringing this one inside when it gets cold. Thrives in the shade and with ample water, eventually reaching 3-ft tall and wide. I've been trying to get some of the small plantlets (off fronds I cut) to root, but so far they're refusing to do so.

Coniogramme intermedia ‘Yoroi Musha’ (Asian Bamboo Fern): Zones 7-10 and as you would imagine shade and plenty of moisture are required. It's said to reach 3-ft tall and 2-4-ft wide...which would make me very happy.

I'll end this post with a pair of Tetrapanx leaves from my front-garden plants. They're all rapidly coloring up and I enjoy bringing them into the house whenever I've got an empty vase. What are you enjoying in your garden this October? 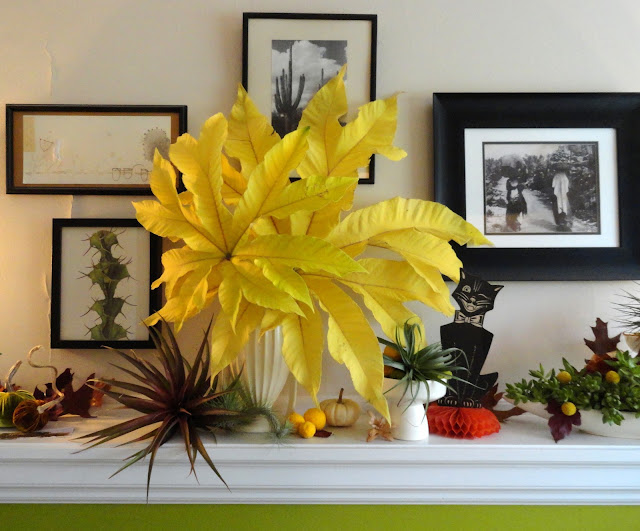