In a Vase on Monday — cheater cheater pumpkin eater

My husband and I have both been traveling. I went to Phoenix, AZ, to visit my brother and his family. Andrew made a spur of the moment (relatively speaking) business trip to China. I beat him back home by a couple of days and knowing how much he loves autumn and Halloween I thought he'd appreciate my pulling out our meager collection of decorations and trying to get into the season. I say trying because my heart is still in sunny Arizona... 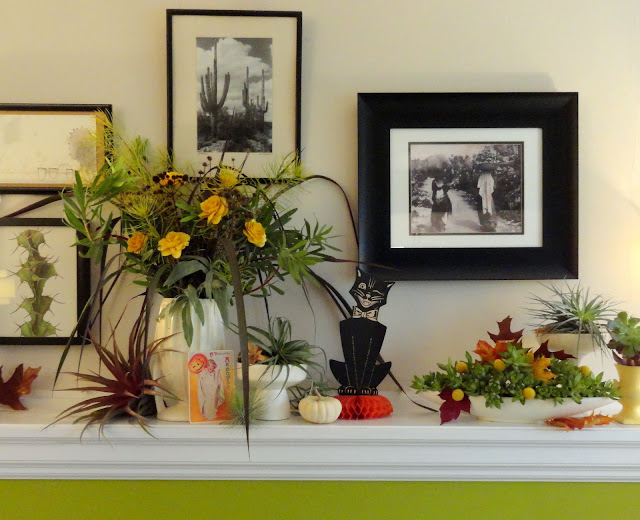 With a major storm approaching I didn't feel at all bad about cutting this Pennisetum 'Vertigo' — I've yet to successfully over winter it and won't be on the patio much more to enjoy it. 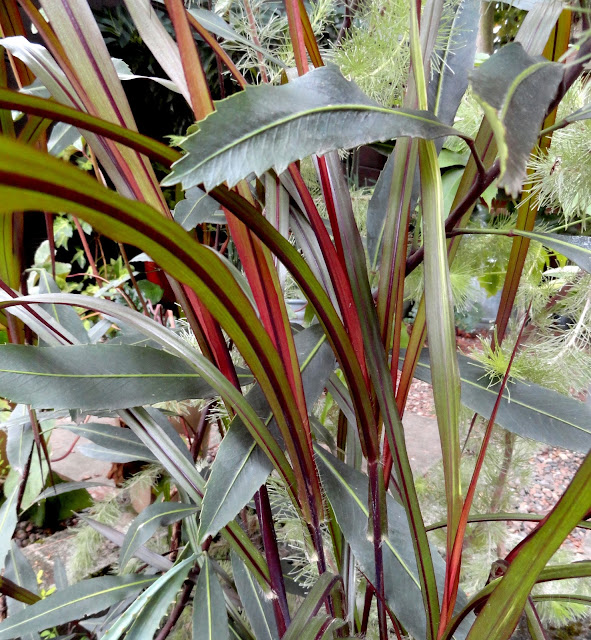 And knowing the heavy rain would have the Amsonia hubrichtii laying on the Agave ovatifolia in front of it, I cut some of it too. 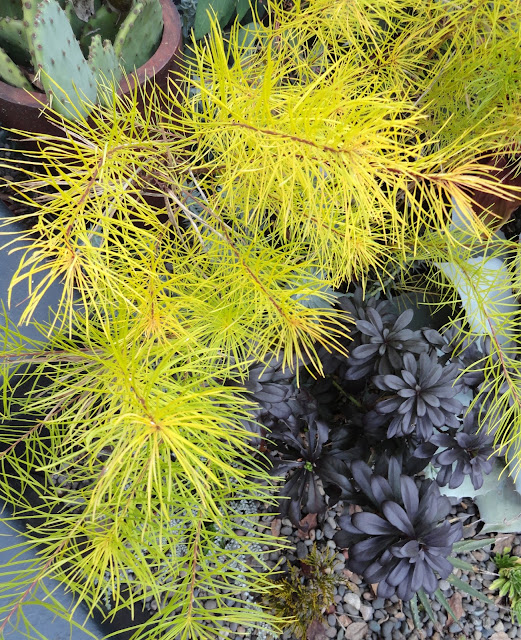 The "fancy" PVC and shower curtain covers went over a couple of Agaves in containers (to keep the rain out), that's when I decided to add some browned Eryngium pandanifolium var. lasseauxii "flowers" to the mix. It would be a shame to just leave them to fall apart in the rain. 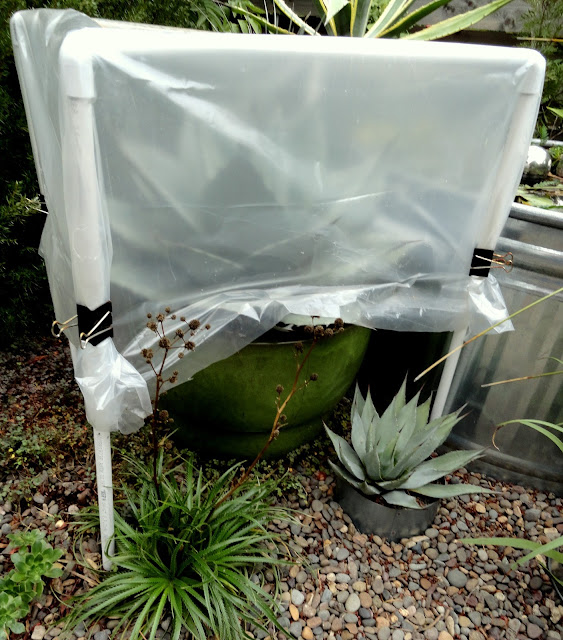 And finally there were a couple of stems on the Leucadendron 'Silvan Red' that could stand to be pruned. 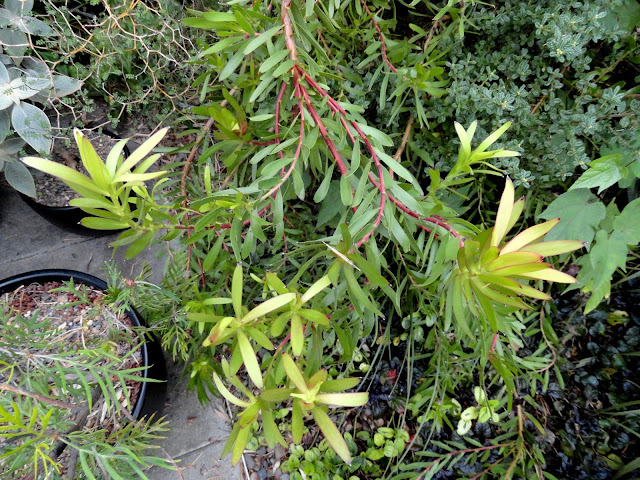 No flowers but great stem color! 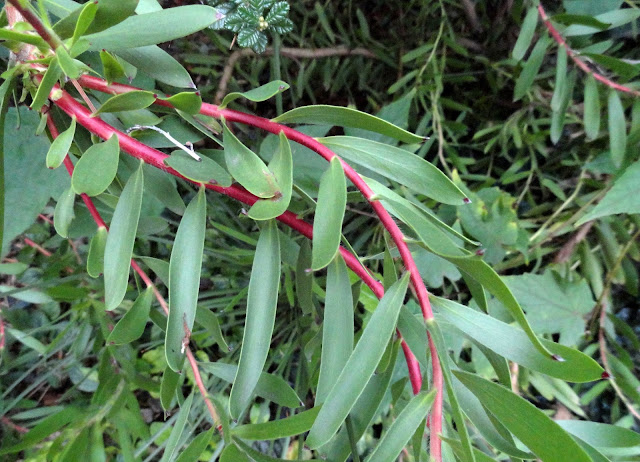 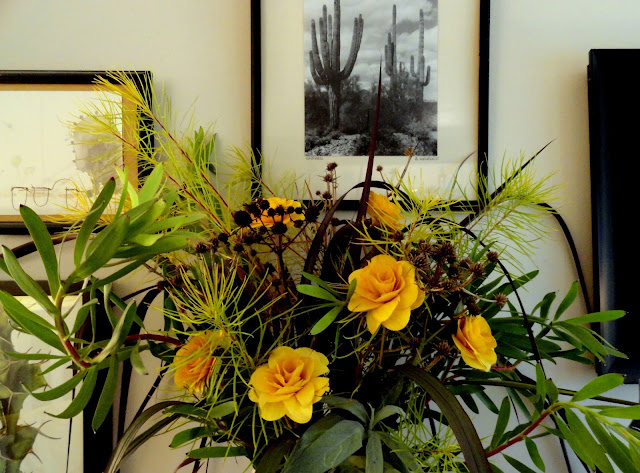 BUT WAIT! Where did those yellow flowers come from? Ya, that's the cheater (pumpkin eater) part. They're wood and I bought them at the craft store (spotted while picking up some black paper for a different project). Aren't they fabulous? 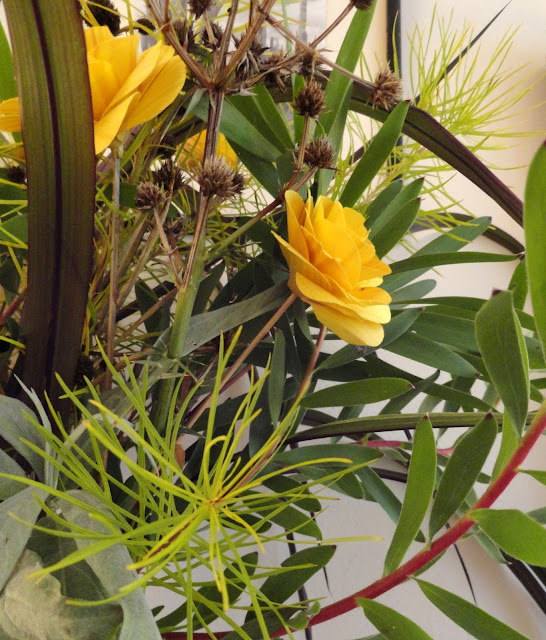 I also spruced up the succulent arrangement from a few weeks back. Dried Craspedia globosa (billy balls) and a few colorful leaves bring in some non-green color. 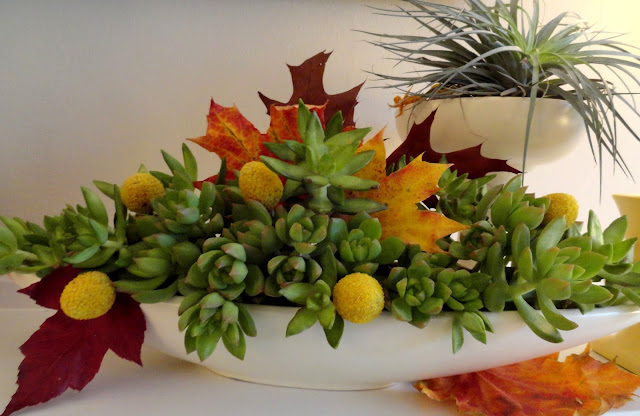 This scene makes me happy, our vintage Halloween kitty fits right in. 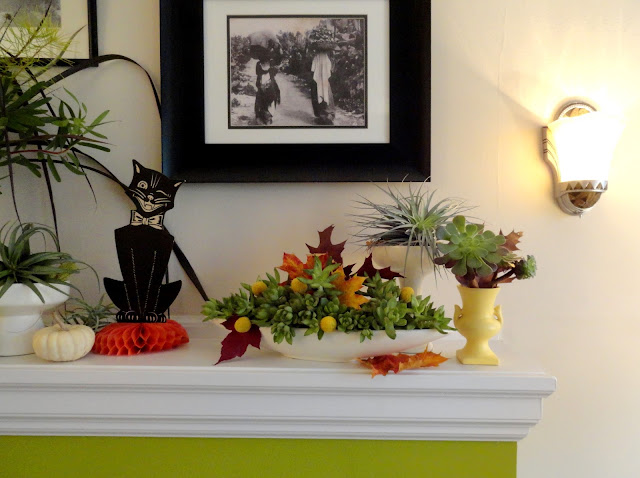 And the velvet pumpkins are out to celebrate the season again this year. 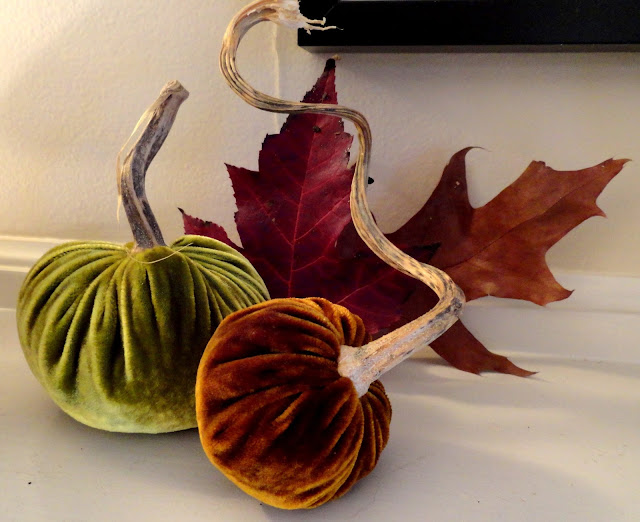 I brought the Tillandsias in from outside (because of the predicted wind), call me crazy but I thought a couple of the big ones looked good tucked in the fireplace. 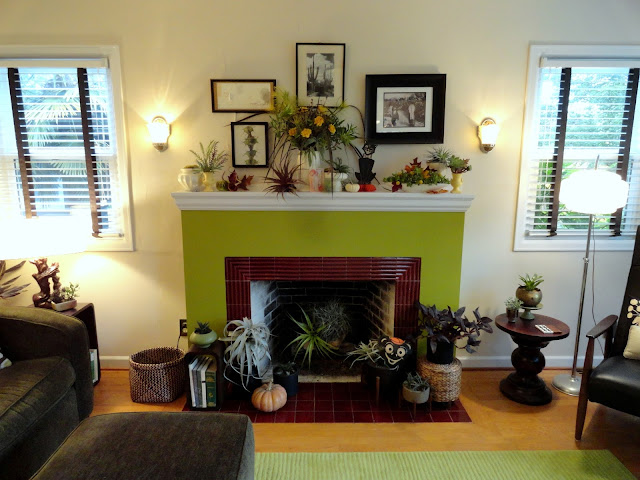 And pumpkins! Of course I bought a couple of them...love the subtle "dirty orange" of this one. 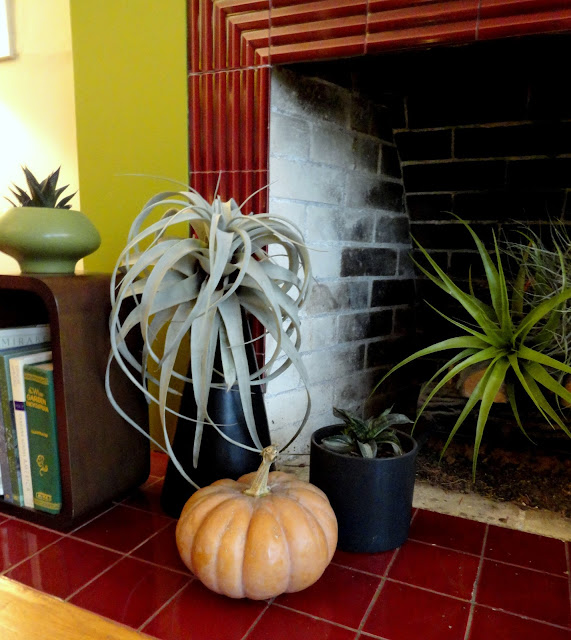 And this blue/grey/silver number is also pretty fabulous...and I do realize it's not a pumpkin... 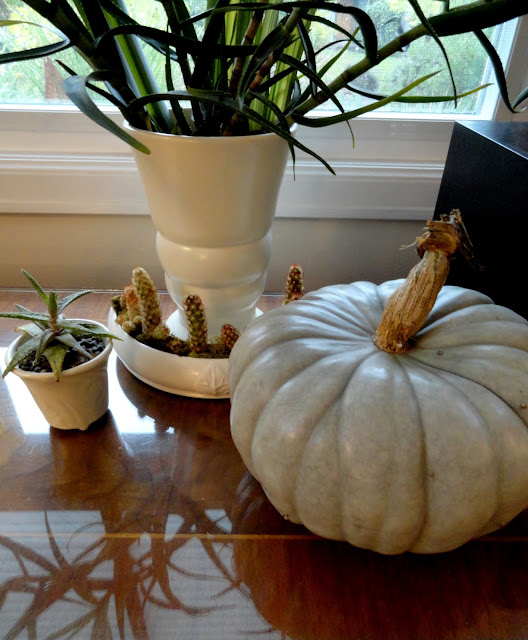 What about you? Are you in the mood for the season? 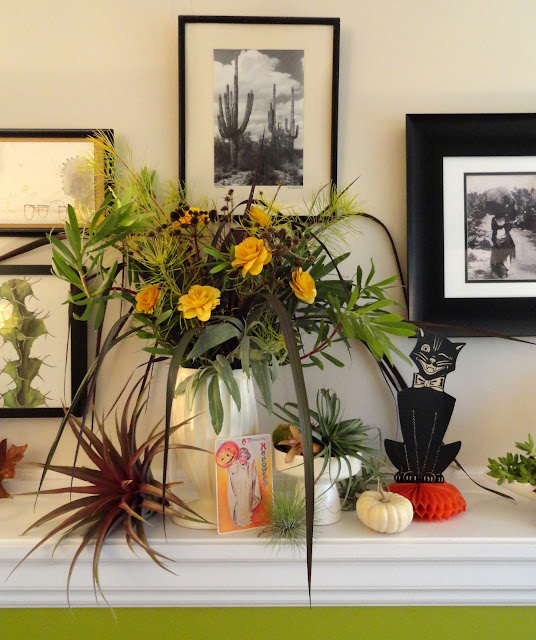 I'm sure there are lots of other bloggers sharing autumn-influenced straight-from-the-garden vase arrangements over on Cathy's Rambling in the Garden...our hostess for this every Monday meme. You should check them out! 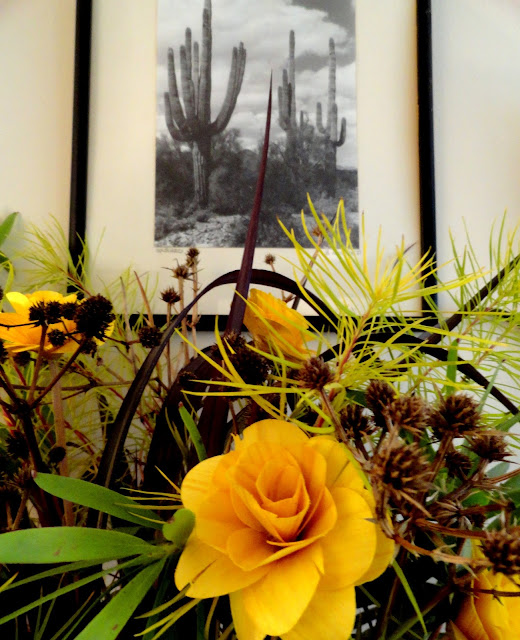 Meanwhile I'm considering baking some pumpkin cranberry bread. Maybe that will get me ready to embrace the season. 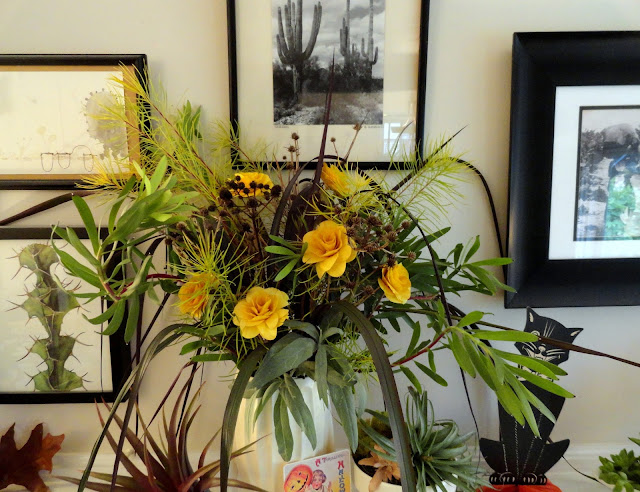