Yes you read that right… “if you make me drop my plants I’ll kick your fat ass.” This is my take-away-quote from the spring 2010 Hardy Plant Society of Oregon plant sale. You know plant people, we are rarely rude to each other, yet I actually had someone say that to me at last weekend’s sale.

I had bumped into and been bumped into by countless people by this point, the quarters are tight and we’re all carrying cardboard boxes full of our plant treasures. Normally you both smile and say “excuse me” or “sorry” not really giving it a second thought. Yet when I turned and my cardboard box (barely) hit hers she said those words. The only thing that I can come up with to explain her behavior is the fact that the Rose City Gun and Knife Show was also going on at the Expo Center on Saturday. Perhaps she wasn’t really a plant person but a gun person who ended up in the wrong show? Anyway I know real danger when I see it and simply gave her the stink eye and moved on.


As usual the sale was packed with fabulous plants; there were so many tempting things to choose from. One of the first ones that caught my eye was this Callistemon citrinus, it’s hard to tell in the picture but this specimen had to be almost 6ft tall, and only $50. Nice. 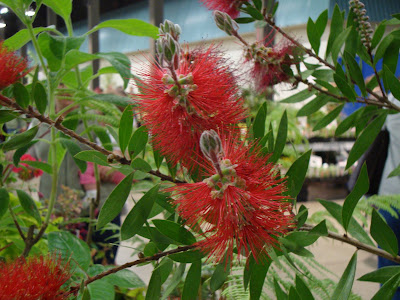 Funny story…it was sold and the person’s name who had bought it was on a note attached to the trunk. I overheard a couple of ladies upset that it was sold but trying to get a picture of its name to remember for the future. That’s when I realized they were taking a picture of the name of the person who had bought it, not that plants name. I could see them hunting down this fictitious plant name (something like ‘Bud Simpson’) for years and wondering why they never were able to find it. I couldn’t have that happen, so I pointed them to the actual name of the plant. They were appreciative. 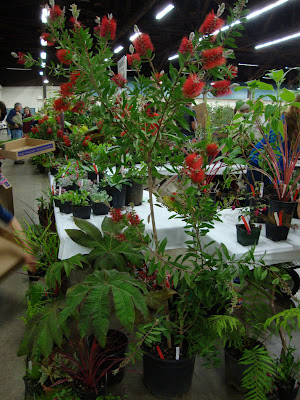 Tetrapanax Steroidal Giant was everywhere, isn’t it odd how different their leaves can be? 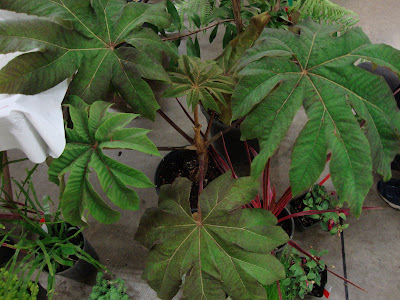 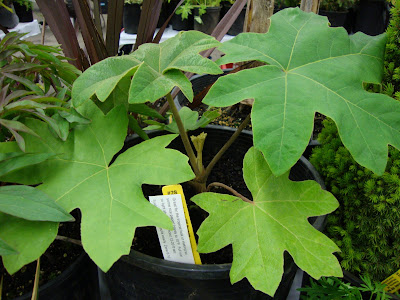 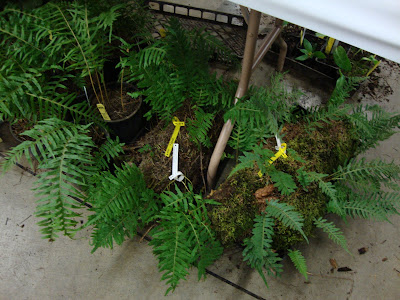 Love this colorful sedum collection…another one of those groupings I would love to replicate as is. 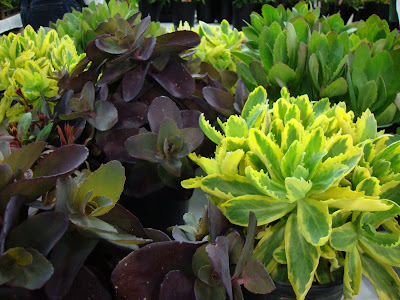 How do you identify an Echium addict? When she actually considers purchasing a second of the exact plant she already has simply because it is so beautiful, even though it can’t be anything more than an annual in her Zone 8 garden. Not that we are talking about anyone I know. 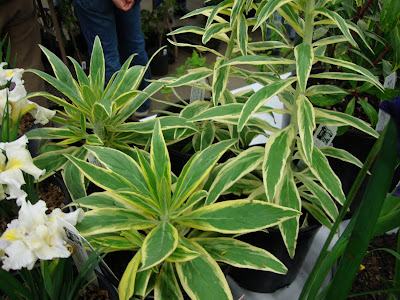 Eryngium 'Jade Frost' was one of the “must haves” of the sale (based on what I saw in others collections)…this one was less pink around the edges than most. I managed to just say no. 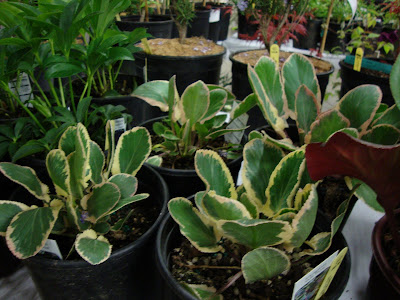 So what did I buy? 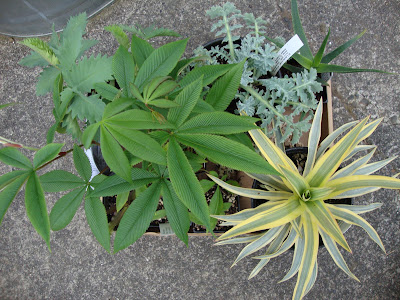 I can cross Melianthus major of my lust list, I found a very healthy little specimen at the Xera Plants booth (had I not already satisfied my Manzanita lust I could have had several choice plants to chose from there too!) 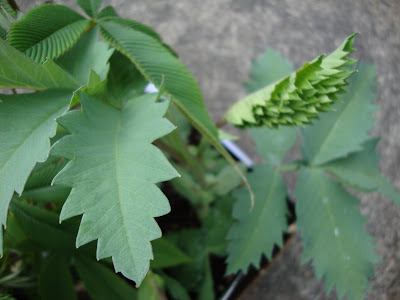 I spotted a couple of Glaucium flavum in the Arizona-esque garden last week (at least that’s my attempted i.d.). So when I saw this one I grabbed it. 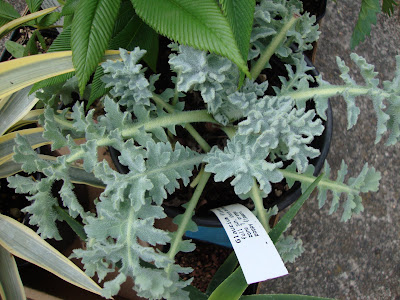 And since this is the ‘year of the yucca’ in Portland (so I’ve been told in conversations with nursery employees….in response to our all loosing multiple Phormium in back to back winters) I picked up another Yucca 'bright star'….how could you not with coloring this good!? 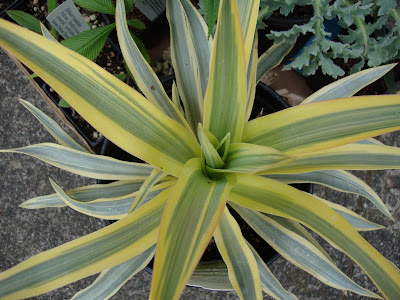 This little 4” potted Rubus lineatus was a bargain and I fell hard for the fabulous pleated foliage. 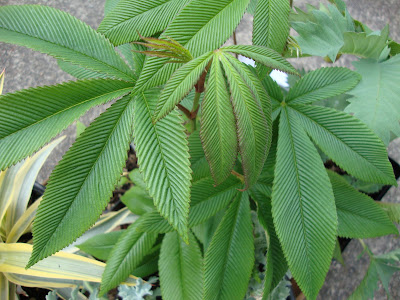 My only non-hardy purchase at the Hardy Plant Society sale (because the Melianthus will live) was an Aloe striatula, I’m still smarting from losing mine last winter and needed another. This one will go in a container, I think. 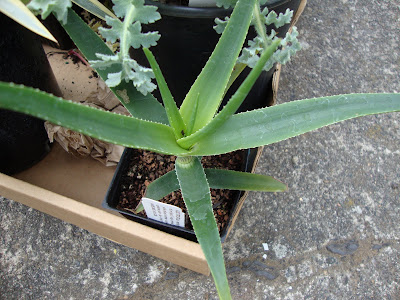 And lastly I picked up two little Echium russicum seedlings (more Echiums to love) and another Eucomis, this one a E. ‘Tugela Ruby’ (on the left) with its burgundy edged leaves its lovely even if it doesn’t bloom this year. 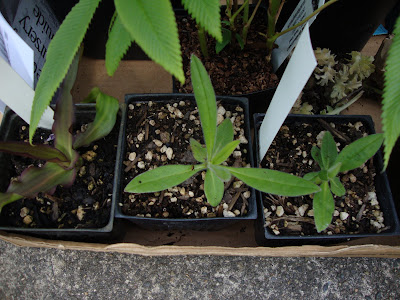 So…pretty good eh? And I got away for ½ of what my usual tab has been, and as a bonus checkout this year was a breeze compared to last year’s long lines.

But since I’m on the subject of lines…who thought it was a good idea to have a plant sale; a gun & knife show; a pet & companion fair; and “Portland’s Largest Garage Sale” all at the Expo Center all on the same weekend? Really? The parking lot was full; cars were being turned away after waiting in a slow moving line for a half hour or longer. I was one of the lucky ones who was let in (how did I get so lucky!?), who knows how many people got fed up and went home. Better planning next time people in charge!