I didn’t need that $16 Rodgersia after all!

At the Hardy Plant Society sale last weekend I stared at a beautiful chocolate Rodersia for quite awhile. I finally managed to tear myself away when I realized I was making the owner a little nervous. Of course I had to come back and visit again before I left, one last chance to buy. But I walked away, without it.

Such fabulous foliage, so dark and sexy. My Rodgersia pinnata ‘Chocolate Wings’ was M.I.A. and I couldn’t bear the thought of going without. But there was a little voice inside me saying “wait”…give it a few more days. And guess what I discovered yesterday afternoon, mine’s coming back! I think it tried to make an appearance earlier, I thought I saw it a few weeks back but then when I looked again it was gone. Either I imagined it or the slugs found a tasty snack and nibbled it away. Not this time! I'm protecting it.

Buoyed by that discovery I decided to see if there was other good news lurking around the corner…sure enough! Looks like the Umbrella Palm (Cyperus involucratus) was hardy after all, there are little shoots peaking out of the gravel. 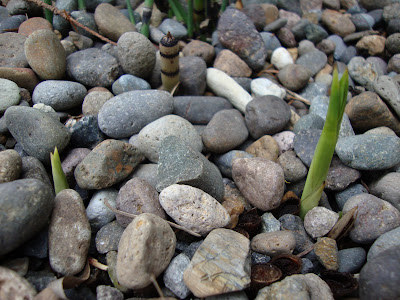 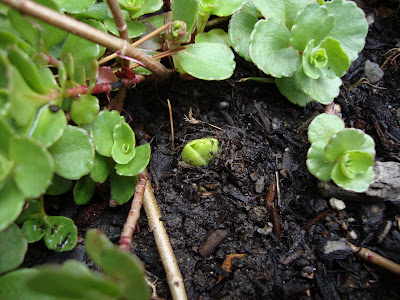 And (this is the happiest news of all!)…I finally found a little Eucomis ‘Oakhurst’ just starting to peak out of the gravel. I was worried about this one. The front garden had lost so many plants already, if these were gone too summer would be very bare. 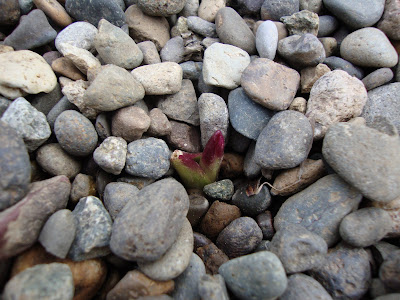 As an extra bonus turns out the twice dead (winter ’08 and winter ’09) Cordylines are making another appearance! They won’t regain the 7ft+ height they once had but they will be a nice low green spiky shape in the front garden. 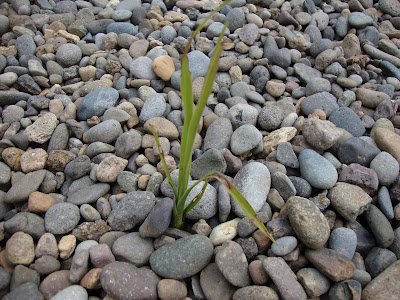 So don’t give up on your no-show plant quite yet, when you least expect it nature just might reward you!