plants appear, plants disappear and plants get a bite taken out of them 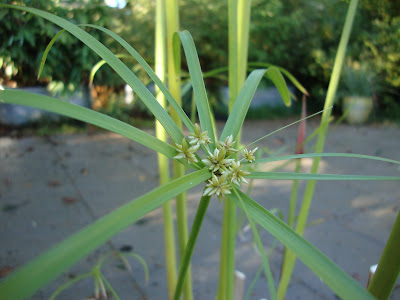 While cutting Papyrus stalks to bring indoors before our first freeze (which struck parts of the garden last night, and no doubt the rest tonight as it is forecast to be even colder!), I noticed something new growing in the container with the Papyrus.

For most of the summer I had an Umbrella Palm, (Cyperus involucratus, a close relative to Cyperus papyrus) setting next to the Papyrus container, and it looks like the Umbrella Palm must have self seeded into the neighboring pot. That's the new Umbrella Palm above and below. You can see the white ends of the cut Papyrus stalks in this picture... 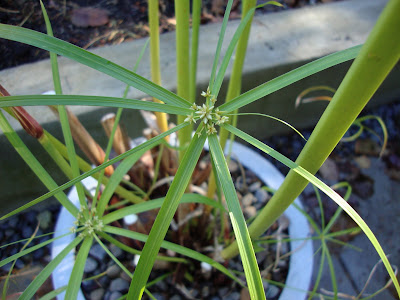 Interesting...the Papyrus is sure to die over the winter and the Umbrella Palm is hardy to 10F, so I guess I know who will win the battle for possession of this container.

Also in the “plants appear” category, wouldn’t you just know as soon as I announce my intentions to move the monster Acanthus it starts throwing out new plants? The battle hasn’t even started yet and it’s already letting me know it isn’t going to be easy. Two new baby plants sited so far. 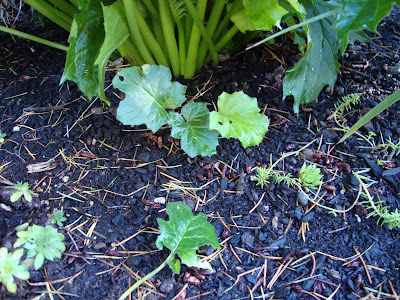 I’ve been waiting to uproot my Datura seedlings until the last possible minute. Since they’ll be gonners with our winter temperatures I thought I’d experiment and pot them up for a warmer winter indoors. The last time I checked, a couple weeks ago, there were 3 good sized seedlings and a few small ones. When I went out to dig there were only 2 small ones left. Where did the others go? Isn’t this plant poisonous? There were absolutely no sign of them. They were twice, if not three times, the size of the 2 was able to dig (that's one below)…. 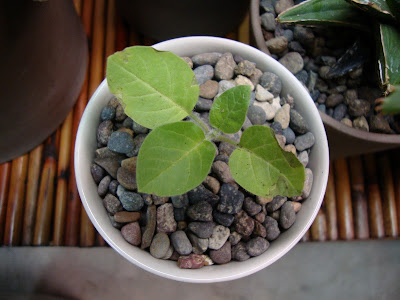 And my last garden discovery of the day. Something took a bite out of this Agave! Perhaps a little Agave juice is the perfect antidote for Datura poisoning? 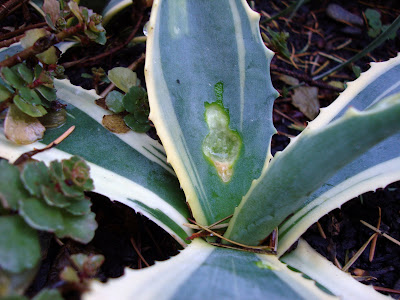