According to the forecast Sunday’s 35F high is the last time we’ll be above freezing until Wednesday, or maybe Thursday. Add in the wind chill and it’s bitterly cold out there.

It’s the duration of the temperatures below freezing that particularly concerns me. A night in the 20’s followed by a day in the upper 30’s or 40’s is not as bad as a constant freeze for multiple days. Then there’s the drying burning wind…it all adds up to plants that are borderline hardy in Zone 8 facing temperatures that are harmful or deadly.

Last year when a similar stretch was predicted I thought they were just over-reacting, after all the local news loves to sensationalize things. Portland doesn't get that cold. It won’t be that bad I thought! Ha. Every Phormium (Flax) and Cordyline in my garden was toast.

If I could avoid the same thing this year then I was certainly going to try.

Personally I am thankful that our “arctic blast” (as the news channels are calling it) had the good sense to arrive on the weekend. Friday afternoon I bought 15 yards of burlap, 35 ft of insulation, twine, tape and garbage bags; an investment for sure, but cheaper than replacing dead plants. Then on a cold, but dry and sunny Saturday, we spent the day wrapping up vulnerable plants. 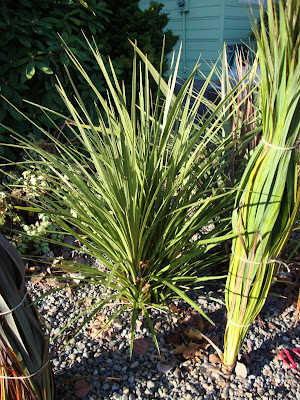 For the Flax and Cordy’s first the leaves were tied up, to make them manageable. 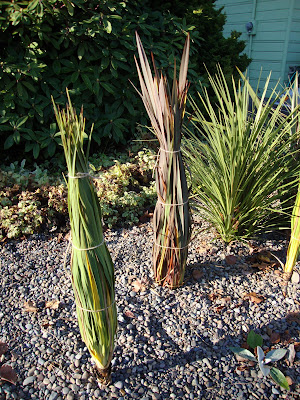 Then a wrap of burlap went around, followed by a layer of thin silver insulation. If that bundle seemed like it might whip around too much in the wind then we staked them for stability. 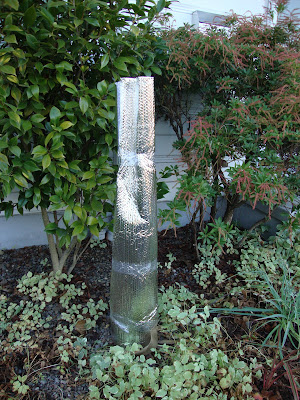 Finally a bag to cover off the top, and keep all the shiny silver from blinding the neighbors. 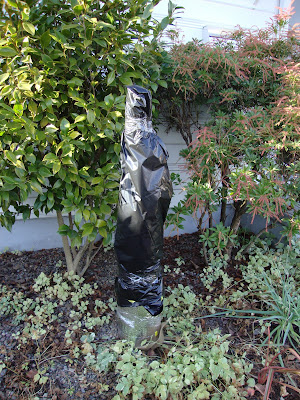 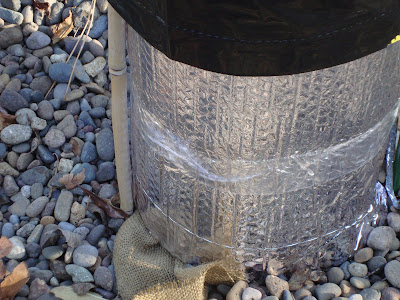 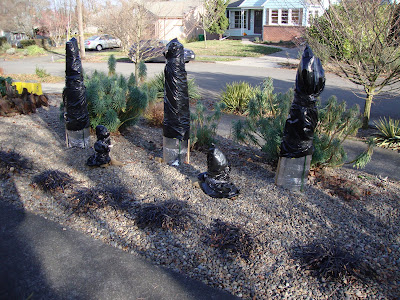 One of our neighbors came home while we were mid-process and asked what kind Christmas display we were putting up. 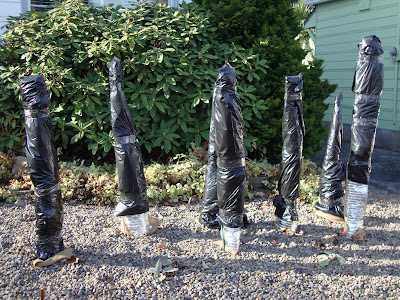 The new front garden Tetrapanex and purple Yucca are under our old recycling bins (upping the trashy look significantly). I wouldn’t normally protect a Yucca but I was never able to find any good information on the hardiness of this variety. 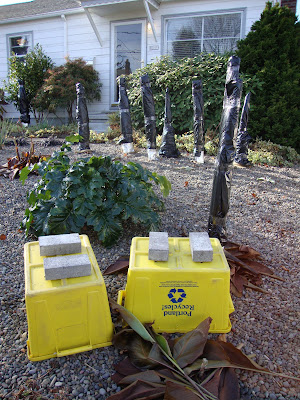 Last year I protected this Tetrapanx under the yellow bins shown above, but since it grew a 4 ft of trunk this year it wouldn’t fit! 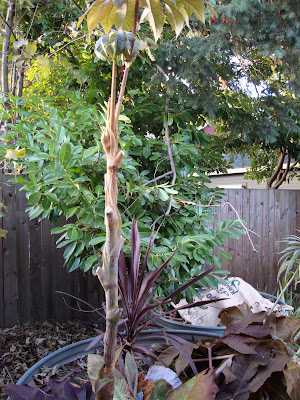 The base is heavily mulched with leaves. Does anyone have experience over-wintering a Tetrapanax with a trunk like this? Will it die back and sprout from the base? 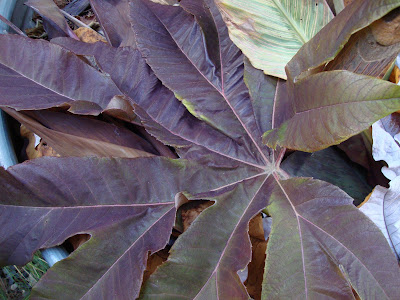 Other plants were covered with bubble wrap and burlap. Like these agaves (there are 5 little guys under there) 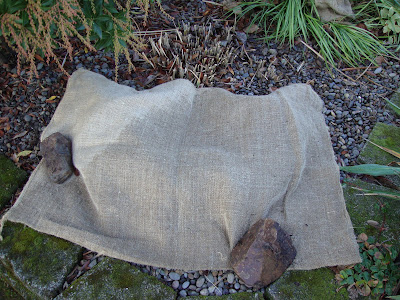 Agave spikes make it easy to keep covers on during a wind storm. 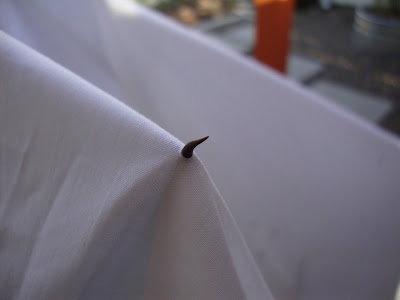 There are more agaves under this burlap/banana leaf cover, and my Fascicularia-pitcairnifolia is hiding under the over-turned bucket, covered with leaves. 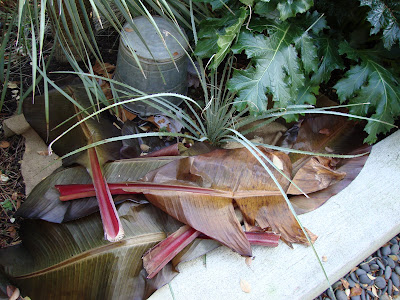 The Dasylirion wheeleri all made it though last year unscathed, with no protection what so ever. So they’re gonna be tested again. 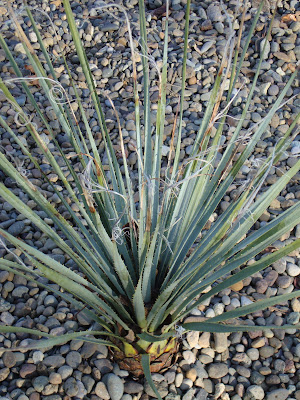 Earlier in the week all the pots that could be moved were transferred to the unheated garage. The banana pseudo-stems were wrapped with burlap and a little bubble wrap. Last spring I picked up a half dozen coffee been bags at a coffee shop in Eugene. They added a bit of color to the landscape. 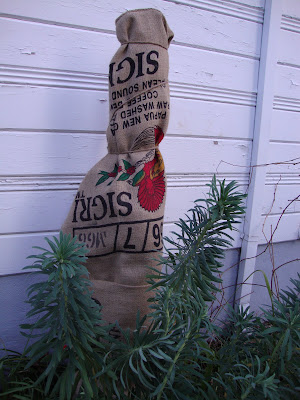 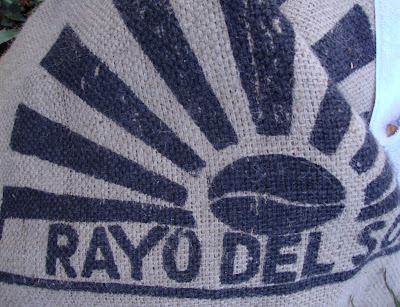 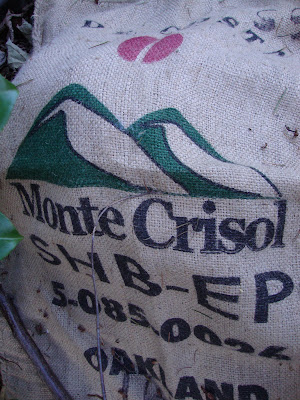 The Echium leaves were still looking this good after 2 nights at 26F. I mulched the base heavily but don’t hold out much hope for this one making it, I imagine once we hit the teens it will be fried. 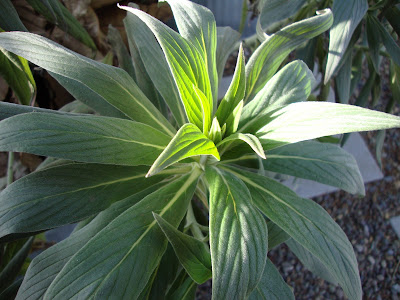 Later that night it hit me. During the “arctic event” last year we had snow to insulate the roots. So while the tops of the Flax and Cordy’s died the roots of most were still alive. Here is a picture comparing what came back from the roots (right) with the replacement I planted in the spring (left).You might be wondering why I replaced plants that died in last years cold with the exact same type of plants. Partially because I’m foolish, but mainly because I love them and they happily grew through 3 prior winters without a single problem I figured last year was a fluke. 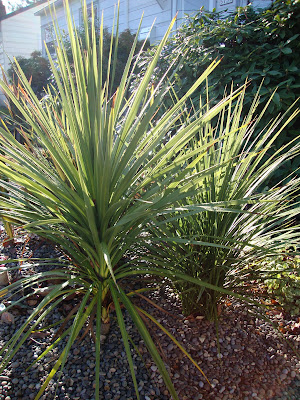 But back to the snow issue…this year, no snow is predicted to insulate the roots. So….did we protect the leaves, only to have the roots freeze? Will the gravel insulation be enough? Only time will tell. Tonight’s low is predicted to be 17 with wind chill values taking us down to 5 to 15 degrees. Like I said…baby it’s cold out there!