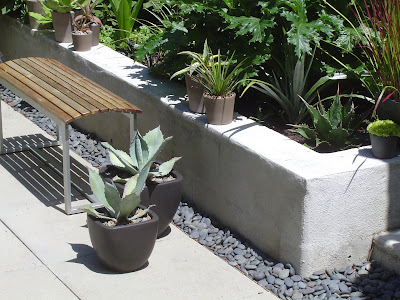 When we had the wall around the patio built I asked about tinting the plaster (it’s not poured in place, but rather cmu with a top coat). The idea was quickly dismissed by the contractor and I was told to just paint it later. We got a very affordable bid so I was never quite sure if he didn’t want to bother, didn’t know how, or there is really no such thing as tinting the plaster and I made it all up.

So it’s coming up on 2-years later and I haven’t painted. I can’t decide! Have you ever looked at a painted brick house, or fireplace, and wished it had never been painted? I am afraid I’ll regret it, it will end up looking bad, or it will be a constant maintenance pain in-the-backside. But then I see a dark charcoal wall or a vibrant orange or yellow wall and I think about how much character and pop it would add. If you are having trouble picturing what I mean take a look at the photographs from Scott Calhoun’s book The Hot Garden as shown on Pam’s blog Digging, she reviewed the book a while back. 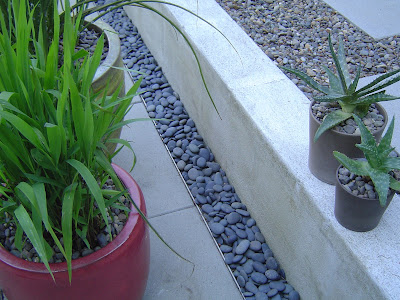 Our patio slabs are light grey, there is a moat of blue/grey Mexican river rock around the inner edge, and the wall is grey. It’s calming; it looks good with everything, but is it also boring? My husband thinks that if we paint it then we should use the same color that we end up using on the foundation of our house. I kind of like that idea, after all they are similar in texture and height and would relate the patio to the house. There is also the orange of the shade pavilion to play with. Have you ever painted a masonry/stucco wall outdoors? How did it turn out? Did you love it? Regret it? 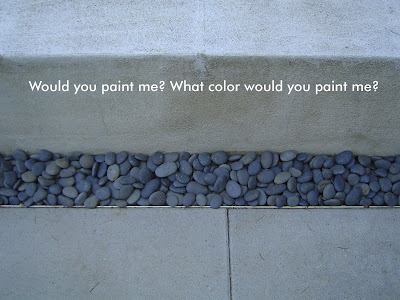