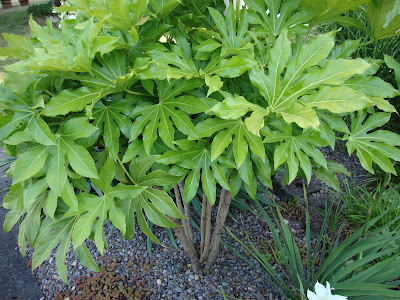 I have a friend who calls the Fatsia japonica the Apartment Plant. She hates them, equating their use to boring uncared for plantings near similarly described apartment buildings. I don’t agree! I see their big glossy palmate leaves and think they are almost (dare I say) tropical looking. Maybe it’s the old “familiarity breeds contempt” reaction? She’s grown up in Portland and seen them all her life, whereas I moved here from a cooler climate and fell in love with them. 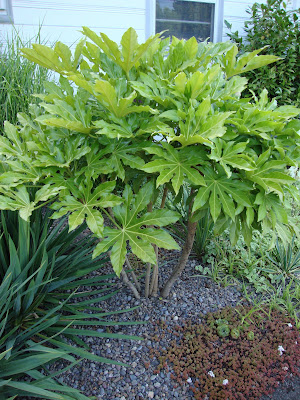 I planted this one the fist summer in our home; it has now been in the ground 4 years. The picture below was taken shortly after planting…and yes that is bark mulch. I needed to put down something and since the previous owner had just spread fresh bark mulch I matched it, knowing that we would be laying down gravel the following year. 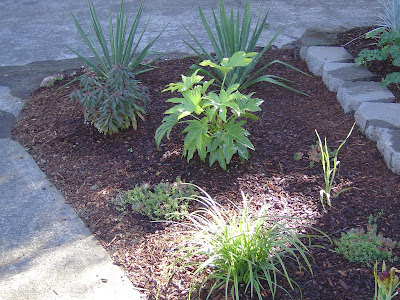 I believe I paid $7.99 for a 1-gallon size pot and I remember the tag saying something about it resembling a papaya tree if the bottom leaves were trimmed. What’s not to love about that! Sounds tropical! I had no idea then what a papaya tree looks like but after a little time in the internet I was excited at the idea. The photo below is a picture of a Papaya tree in Panama (from http://www.photoatlas.com/ - photo by Urs Hauenstein). 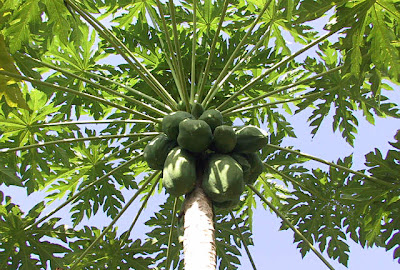 I didn’t trim up the bottom leaves for any other reason than they started to look ragged, but I love the Papaya-ish look. 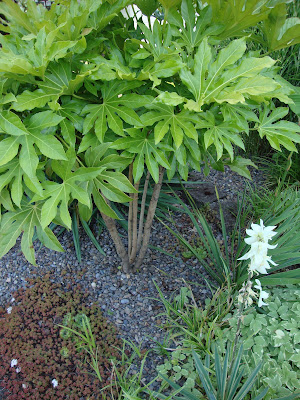 I now know that this plant needs a bit of shade to thrive, but the tag said sun, so that is what I gave it. Others that I see around town in the shade look shrubbier, with their bottom leaves in place. Another thing to love about this plant is the unique white spherical flowers it gets in late summer/early fall followed by the most amazing black seeds which the birds love. I’ll share pictures of the blooms when they happen. I love my apartment plant!