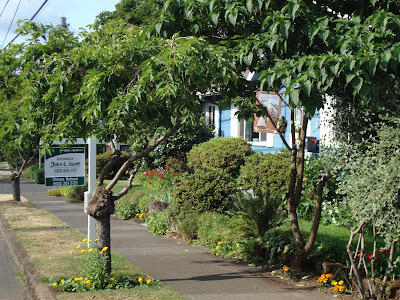 Several homes that I regularly drive by have sold recently, even in this bad economic climate people are on the move, probably some moving for exactly that reason. I’ve read the average American moves 11.7 times in a lifetime. I guess I’m “above average" since I’ve lived in 13 different homes and I’m only (big scary number removed to protect the innocent) years old.

Watching the transformation, as the person who planted and tended the garden leaves and a new person makes the place theirs, has me thinking about the process of leaving an established garden behind. How do people do it? I’m sure there are a lucky few who move at the right time. When they’ve realized all the possibilities of their current garden and are ready for new challenges. I hope when the time comes that we move that’s the place I’m at.

I just noticed the above for-sale-sign last night. This is obviously a person who cares about their garden; everything is so lush and cared for. How will they leave it behind? 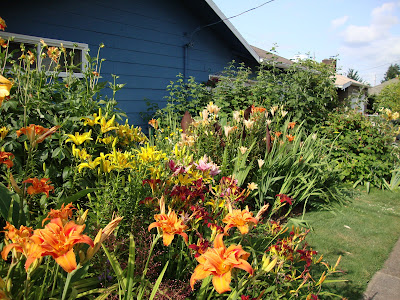 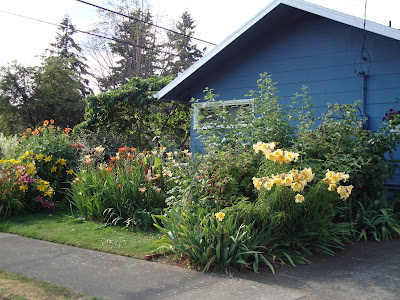 During the frantic few weeks before our move to Portland I was either packing, leaving the house so prospective buyers could tour through, visiting with friends I was leaving behind, or digging in the garden. A neighbor stopped to say how impressed she was that in the midst of preparing to move I was finding time to work in the garden. No not working, I was digging and potting up the plants I couldn’t bear to leave behind; they spent an entire year in those pots while we were in a rental house, looking for our current home. Thankfully they all survived. It means so much to me that I can look around and see plants from earlier gardens, now at home in this garden. These hosta began as container plants on an apartment balcony; this is the fourth time they have traveled with me to a new home. 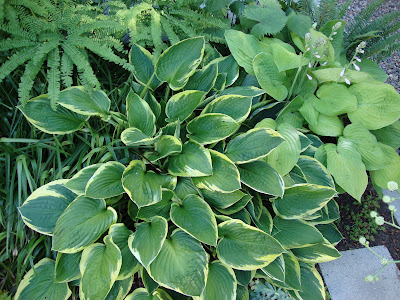 Needless to say my collection has expanded; I am rather invested in this space and can’t imagine leaving it behind. Have you moved and left a garden behind? How did you decide what to take? Or did you leave it all behind and start over?