I first discovered Bells of Ireland (Moluccella laevis) sometime in the mid-1990's. I was living on Seattle's Capitol Hill and there was a wonderful cut-flower shop—Urban Flowers—just 2 blocks from my apartment. I was poor, but I bought flowers there whenever I could rationalize it, which was probably more than I should have. When it comes to the bells, it was the green bracts that got me, I love green flowers.

I've grown them as cut flowers for the last few years now. I planted a seed packet and then self-seeded plants kept on providing me with stems to cut. This year I needed to rejuvenate things and so a fresh packet of seed was sown. 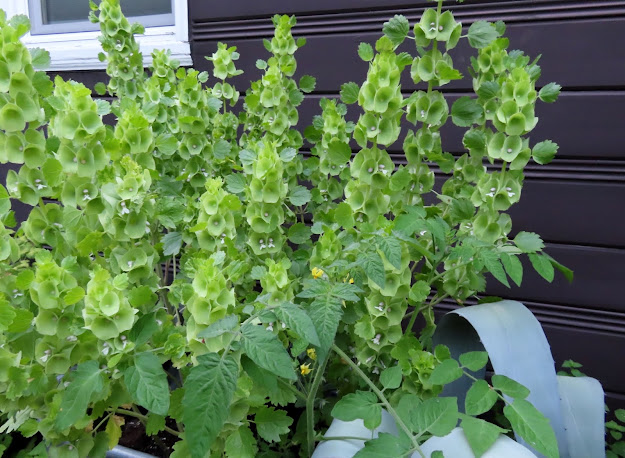 A volunteer tomato came up as well. 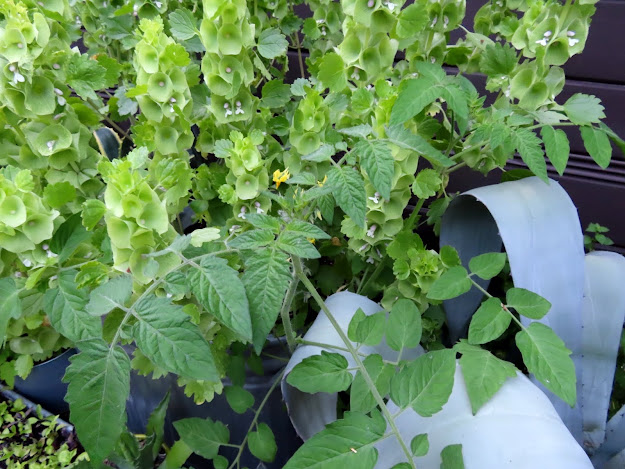 Last week it was time to harvest some of those flowers, both to enjoy them indoors and to give me space to get these agaves back in a good place to grow them on in size. 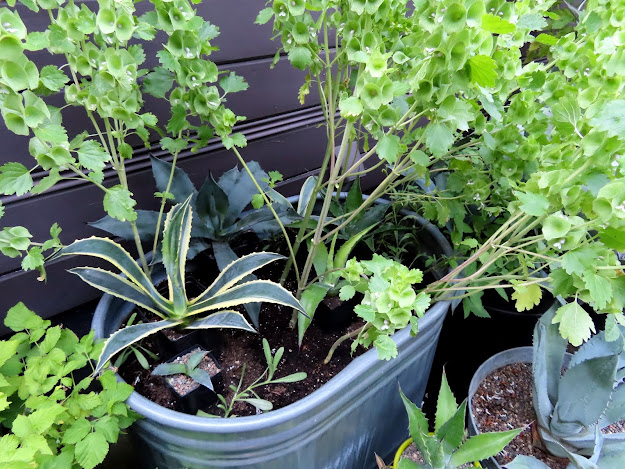 One of the best things about using these tall flower spikes as cut flowers is they last for weeks. Oh and then there's the scent, it's a big bonus. I've always thought of it as kinda sweet, kinda minty, and very green. Just like how blueberries taste blue, Bells of Ireland smell green. Other descriptions I've read say "an odd pine-meets-lavender scent" and "a sweet, vanilla-like scent." 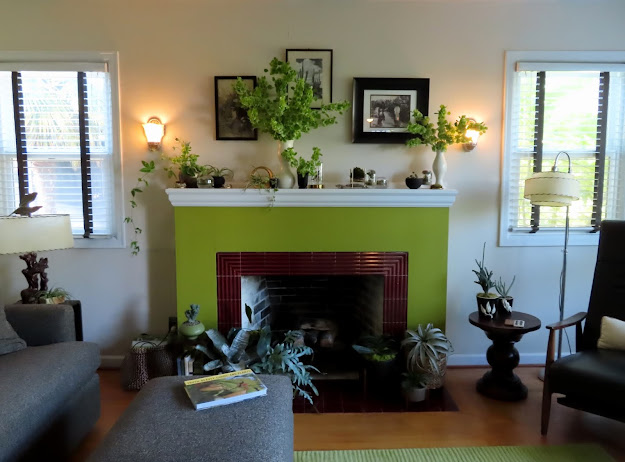 Because I lack the space for a true cutting garden, or veggie garden, I use the driveway stock tanks as such. This year one is filled with an assortment of tomatoes, basil and peppers, and the other has the Moluccella laevis, volunteer tomato, and a few nigella and a scabiosa, courtesy of my friend Mindy. Blooms of the nigella and a scabiosa join a passiflora stem and bells in this vase at the far west end of our mantle. 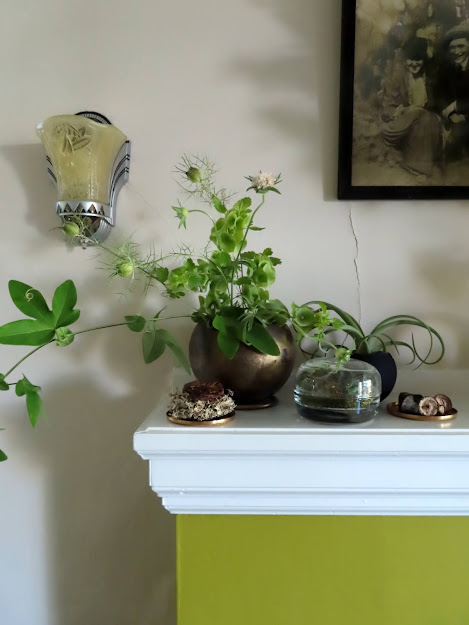 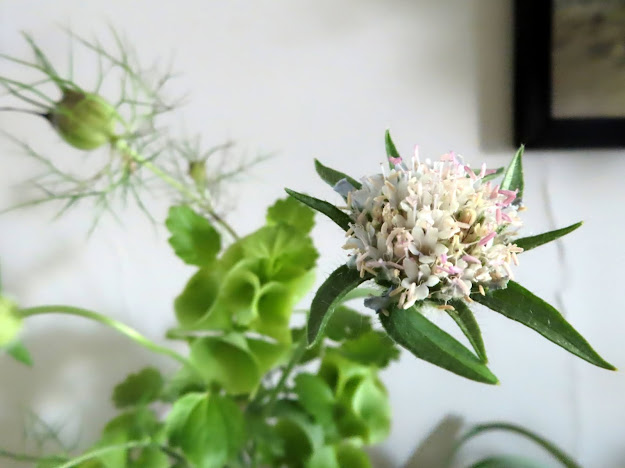 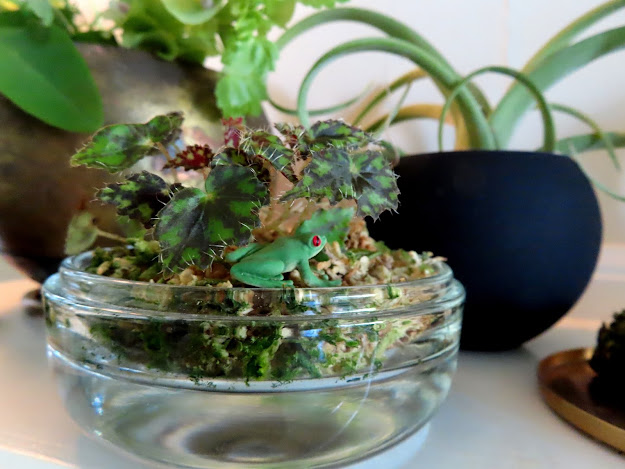 Truth be told I wanted to go really crazy and line up dozens of vases on the mantle and fill them all with bells. Instead I just went with four. My earlier, younger, self still appreciates this bounty...it's lavish! 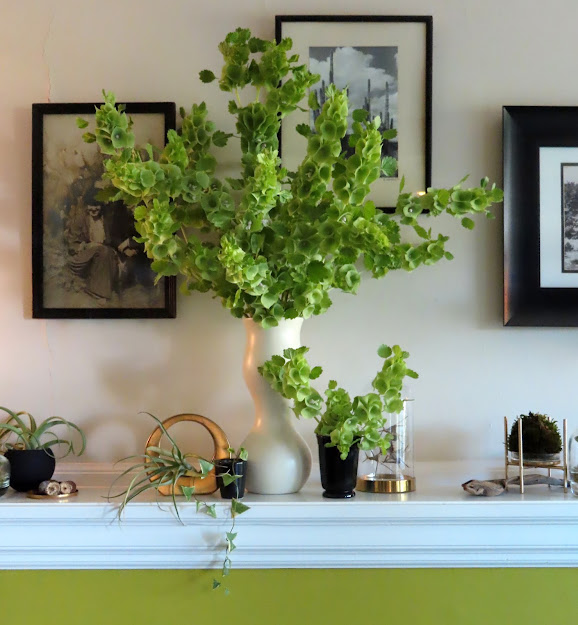 Since there are still more stems to cut, and Andrew is planning to paint the side of the house this week, there might be a hurried harvest. Hmm.... 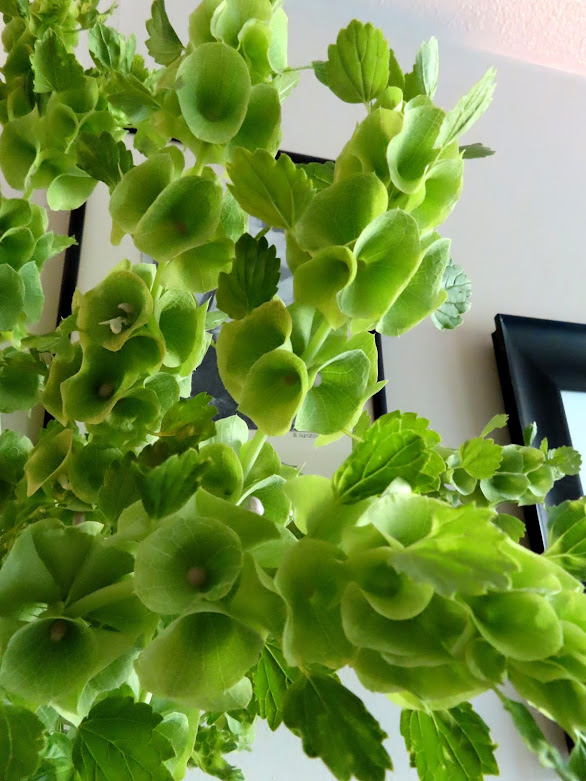 This funky stem grew like normal but then decided to split into three at the top! 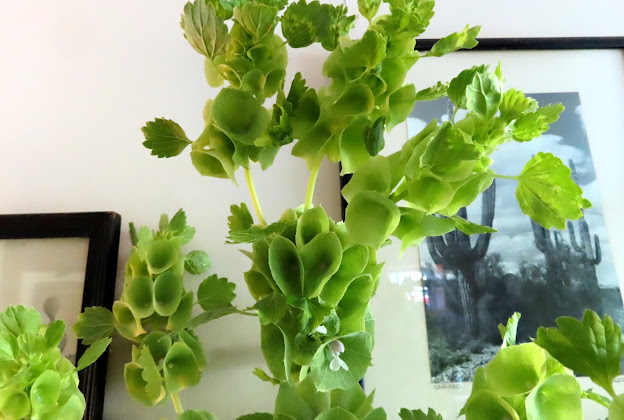 Here's a close-up of the actual flowers. 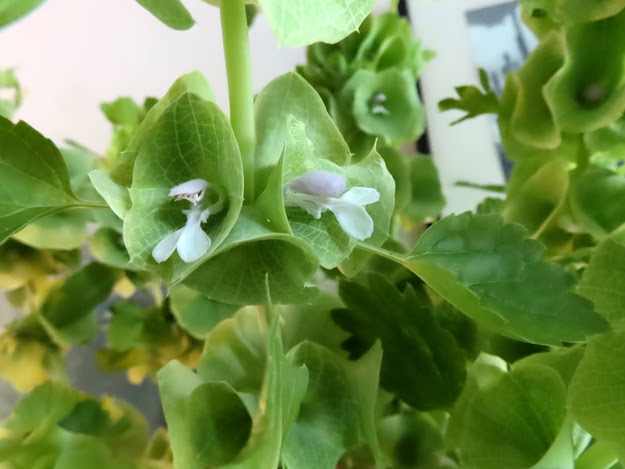 It's been so long since I've changed up the mantle-scape and photographed it that I did go a little overboard with photos here.
The "succulent ivy" (Senecio macroglossus) in the small back container came home with me as cuttings from Dustin Gimbel's garden when I visited. 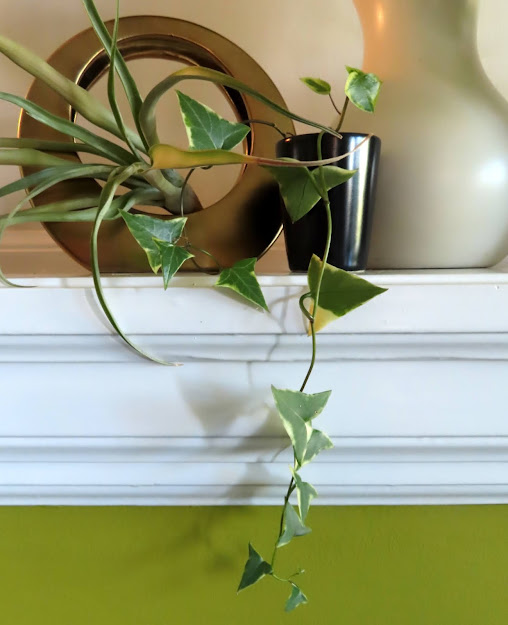 I know it's rooted now because it's sent out a new little stem. 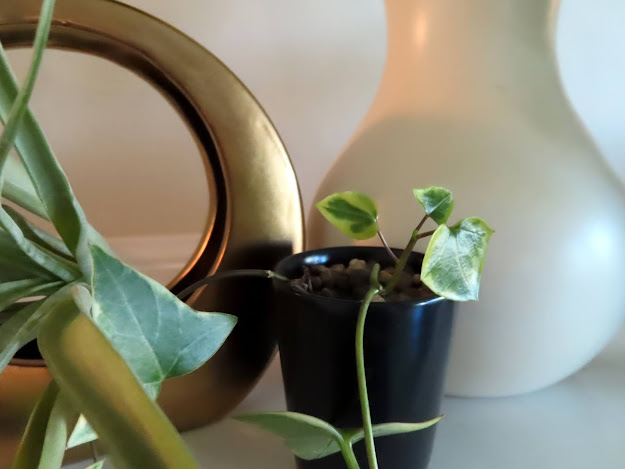 The begonia I had in this glass dome was doing great, until suddenly it wasn't. Now there's a dried bit of a euphorbia on display. 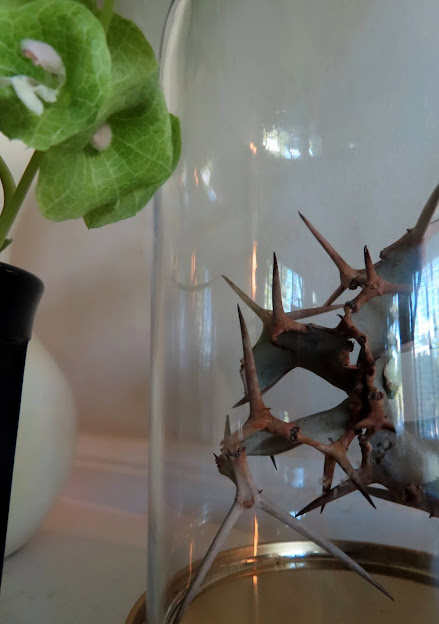 More left-overs from the last mantle re-do (in January!) 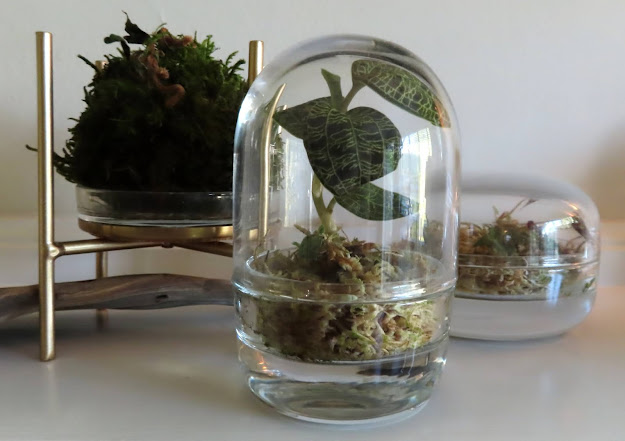 I should take pity on this Macodes petola, jewel orchid, and move it up to a larger container. 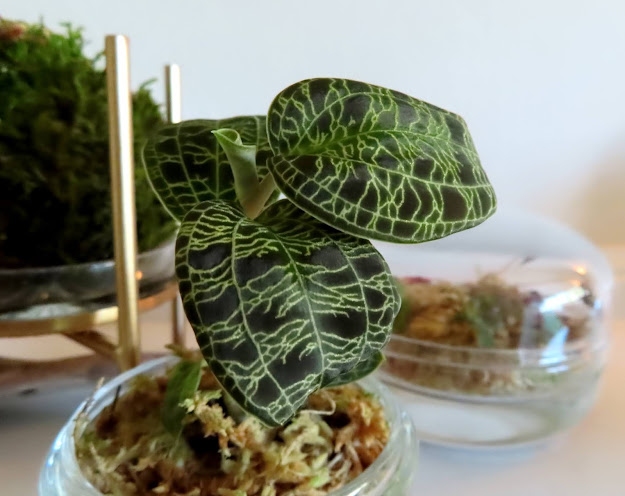 Should. But will I? We'll see. Right now I'm just too busy enjoying my floral riches... 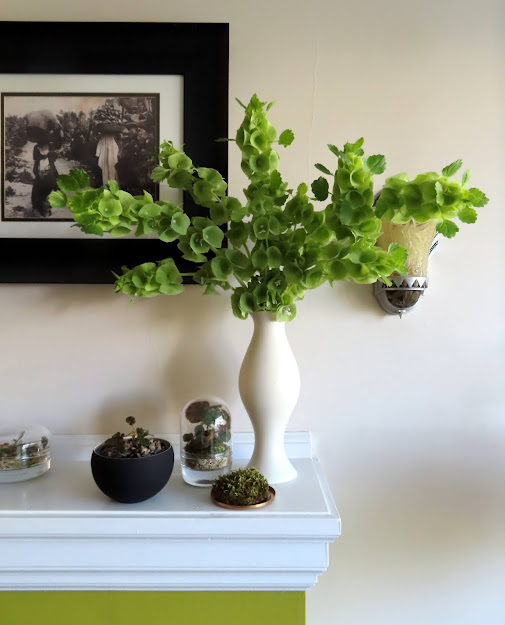 With more in waiting! 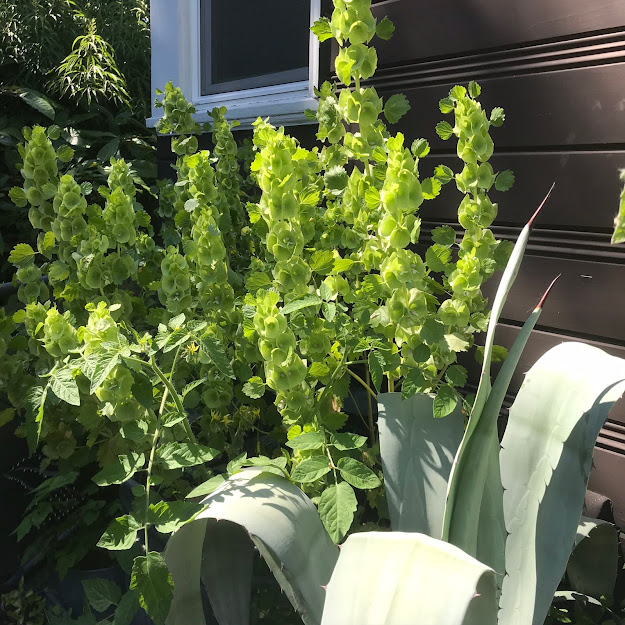