On the mantel, on Monday

No, I'm not starting a new meme. I'm just having fun with the fact I post more about my mantel than in the traditional Monday meme, "In a Vase on..."

So, brass and glass. Two "finishes" I am not typically a fan of. I worked at Pier One Imports in the late 80's and early 90's...I saw enough brass there to last a lifetime. As for glass, well, glass has it's place (windows and wine glasses, for example), but if we're talking about a vase or a planter...glass is never my first choice. None-the-less brass and glass are the theme for my after-Christmas mantel... 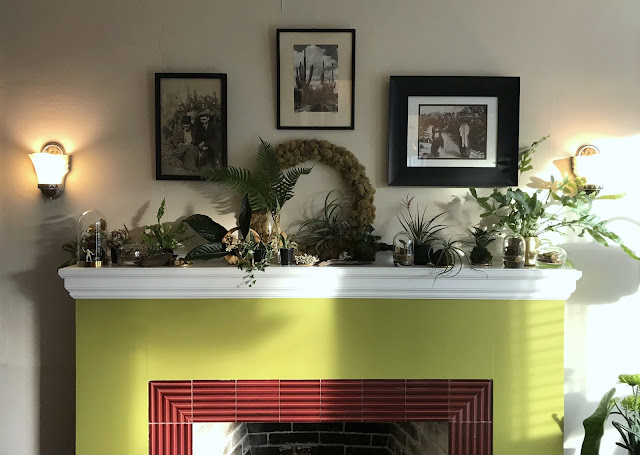 What can I say? Sometimes you just have to change things up! Plus all those small slightly rooted, and need to root, begonias that came my way over the last few weeks needed a home. I thought I'd have fun with tiny terrariums. 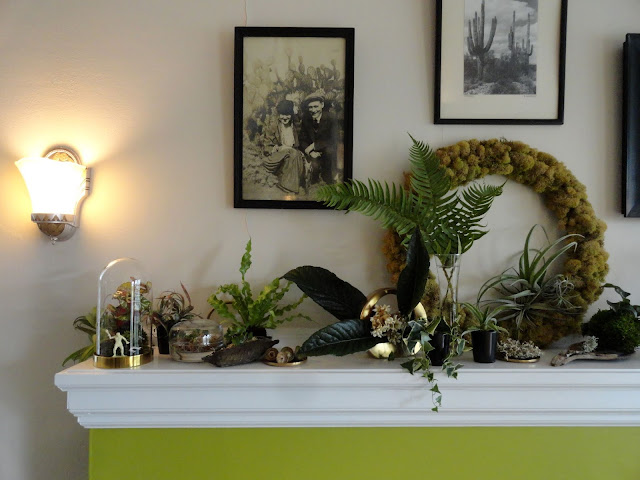 Did you notice the small figure on the far left in the photo above? Here's a close up. I told Andrew I needed small frogs and instead I got a couple of cavemen. 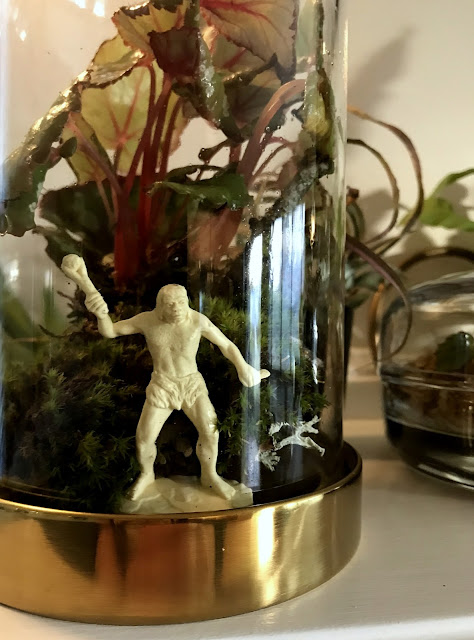 I think he was worried about the moist environment though, because they disappeared just as quickly as they appeared. 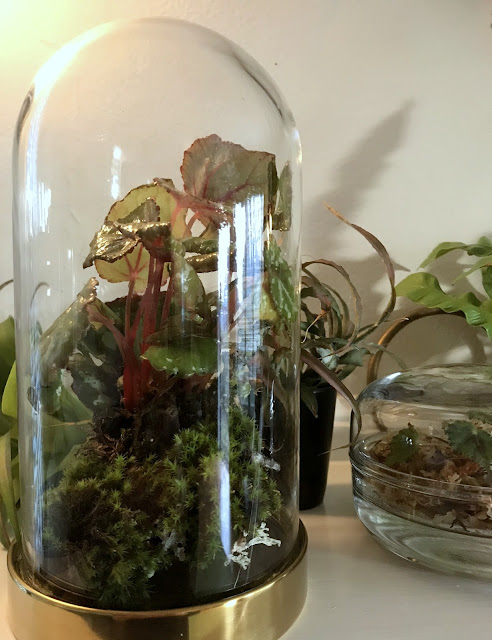 These are Begonia bowerae (eyelash begonia). I had them rooting in water and they started to form small (oh so small) roots. Hopefully this moist environment with a little bit of soil and lots of sphagnum moss will keep them happy. Oh and just for the record, I have no idea what I'm doing. I'm just making it up as I go along. 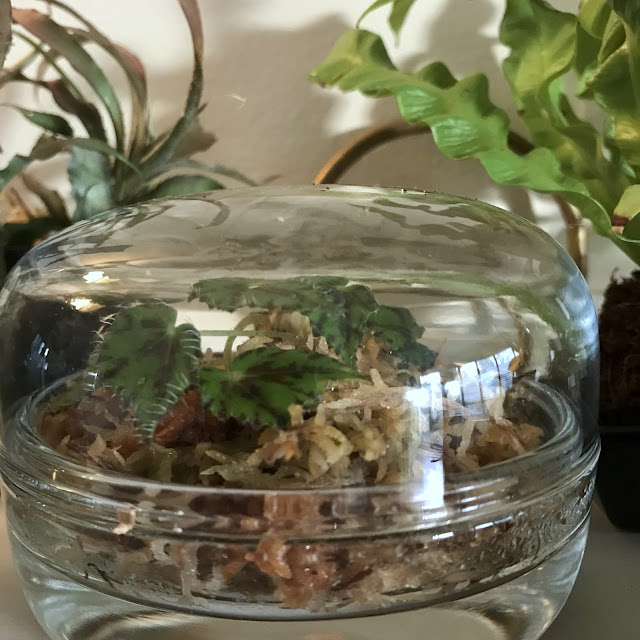 I've kept this Asplenium nidus 'Crispy Wave' fern alive for over a year now, as a imitation Kokedama. Why imitation? Because I didn't use the specialized soil you're supposed to use when you're doing Kokedama. I just formed the root ball into an orb and covered it with moss. In front of the asplenium is a Brachychiton discolor seed pod that I planted up with a Lemmaphyllum microphyllum—a small epiphytic fern. 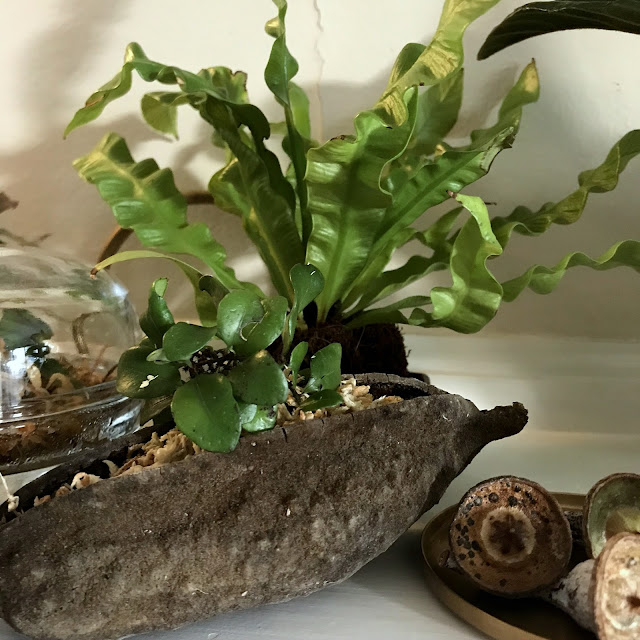 The eucalyptus bits came home with me from California. 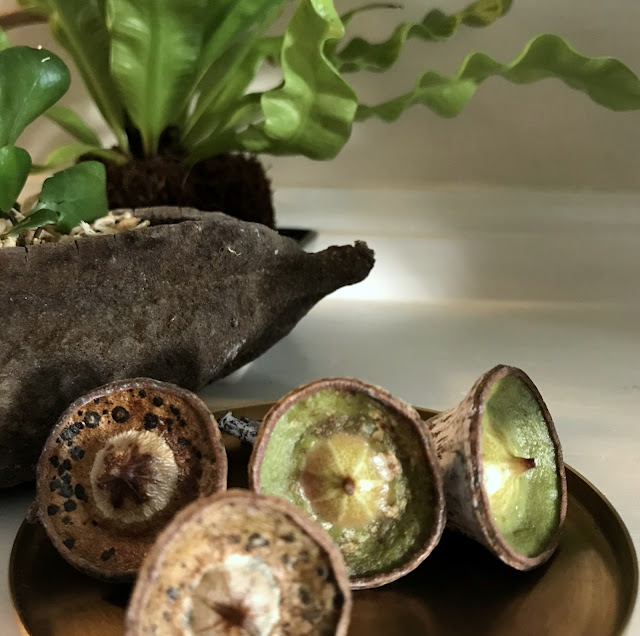 The moss wreath was something I made a few years ago that's just been hanging out in the basement, waiting for a chance to be loved again. 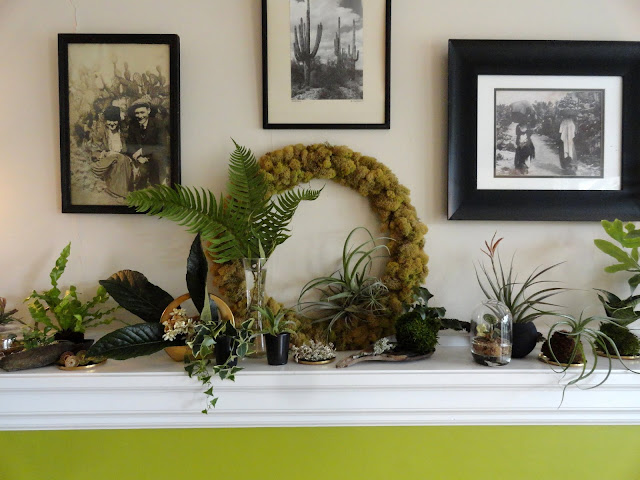 A fragrant cutting from my loquat (Eriobotrya japonica) is in the gold circle vase. Next to that are several cuttings of Senecio macroglossus—I know, it looks like ivy—a gift from Dustin Gimbel when I visited his garden last month. 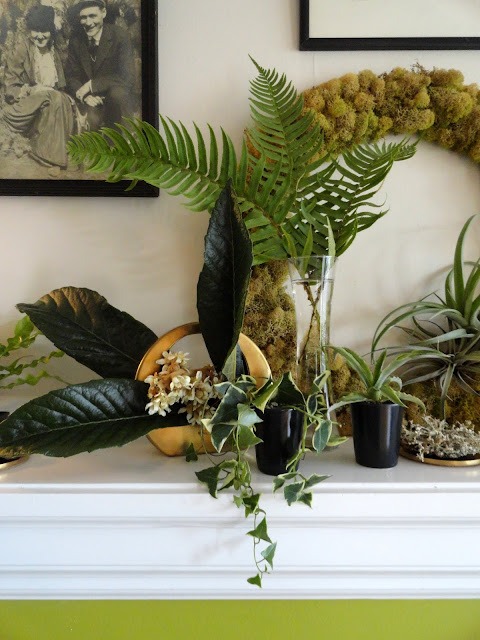 Those fern fronds! They're from an arrangement Andrew bought me for my birthday. My birthday is in July. Amazing right? I'm going to hang on to them as long as they look good, or until my next birthday, whichever comes first. 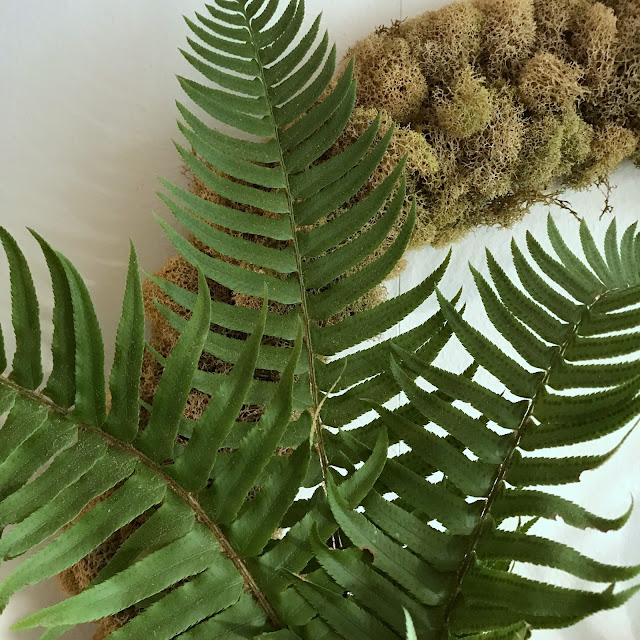 This little Pyrrosia lingua ‘Variegata’ seemed to be asking for the imitation Kokedama treatment, so it got it. 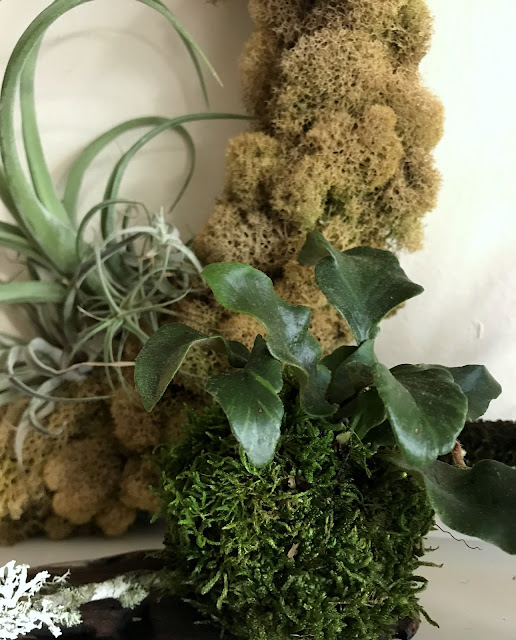 In case you were wondering, there's the other caveman, which actually may have been a cavewoman now that I think about it. 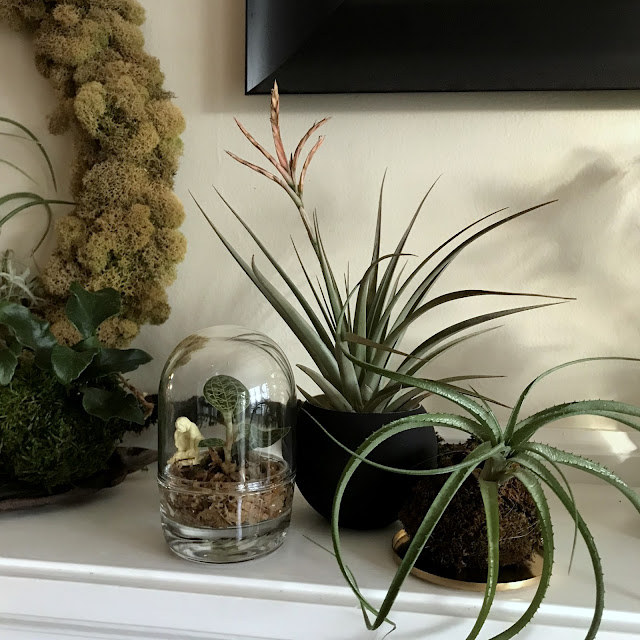 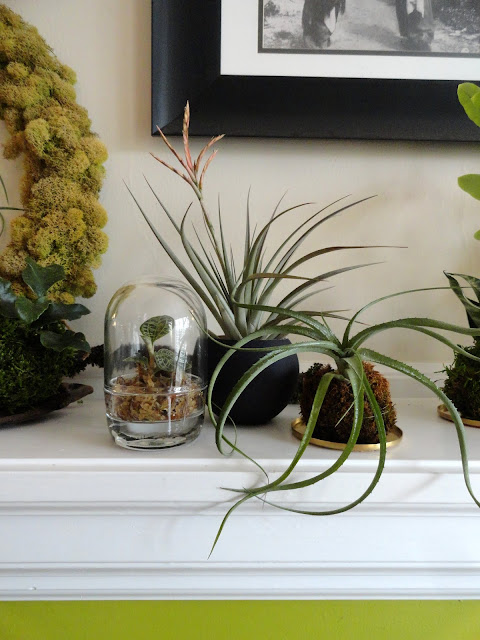 This little cutie is a jewel orchid, Macodes petola. Another common name is lightening leaves, you can see why. 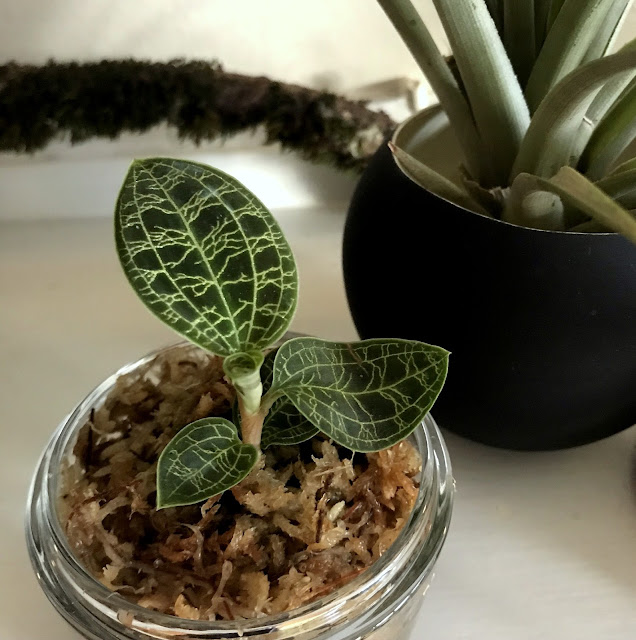 The far end of the mantle includes a Polypodium pseudoaureum (the blue fern)... 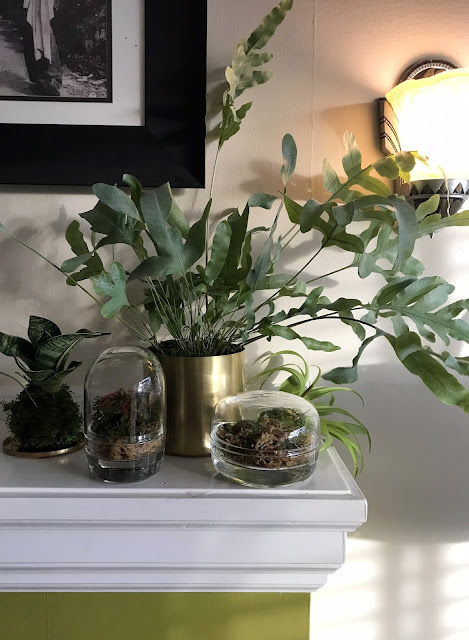 As well as a small sansevieria that got the wanna-be Kokedama treatment. 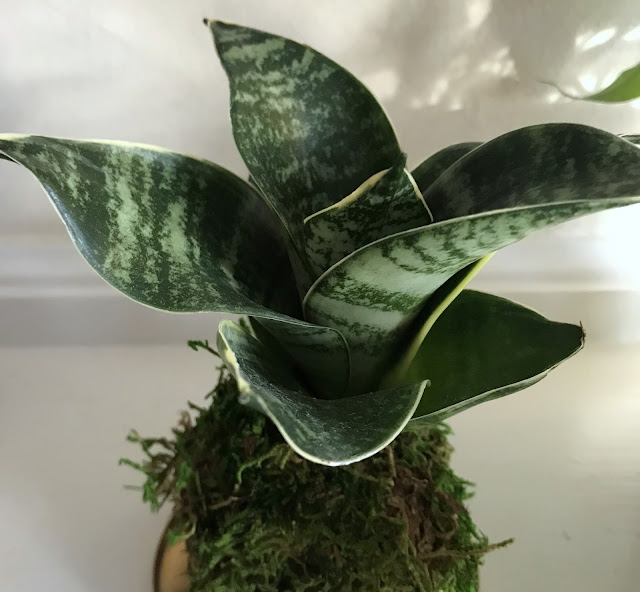 Inside the taller glass terrerium (can I call them that, when they're so small?) is Begonia versicolor. 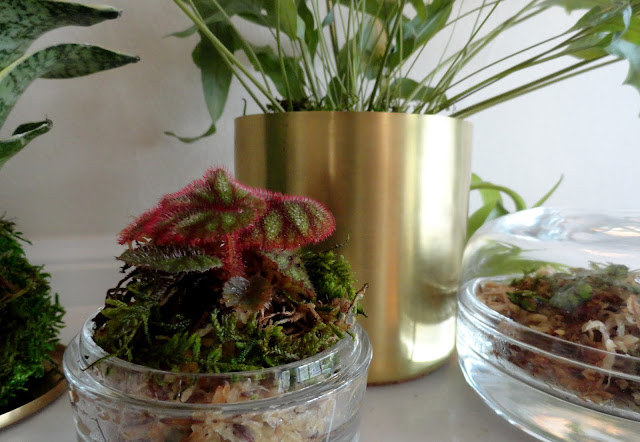 The short one contains another Begonia bowerae. 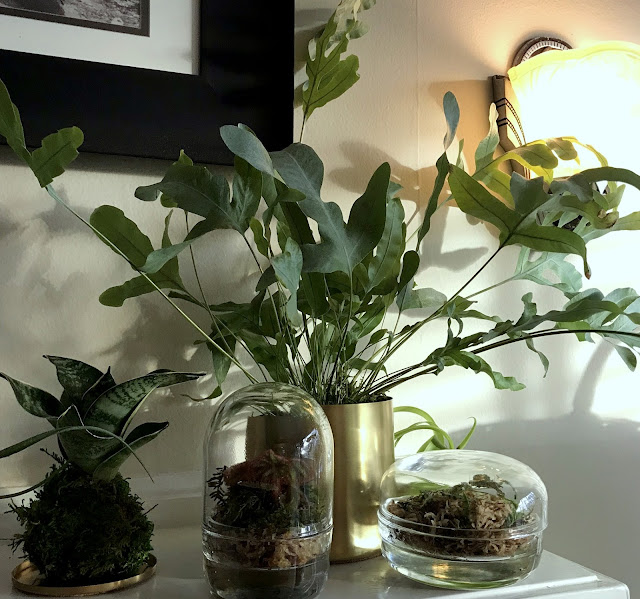 So, that's the current mantel mood! 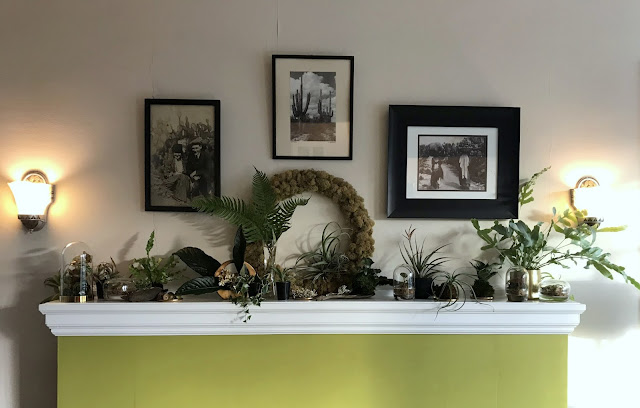 Labels: Begonia, Ferns, in a vase on Monday, inside the house, moss, wreath