Another of the many black and white photos Andrew has collected for me... 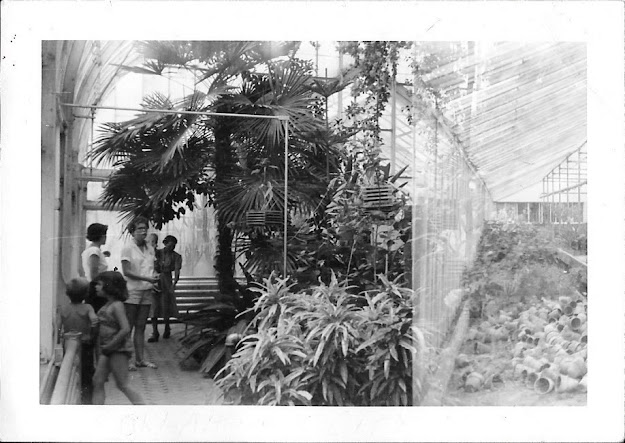 I wonder, is the photo one of those "mistakes" that occurred when you didn't advance the film all the way before snapping the next shot? (yes, I'm old enough to remember having done that) Or is it simply a trick of the light and reflection?
Written on the back... 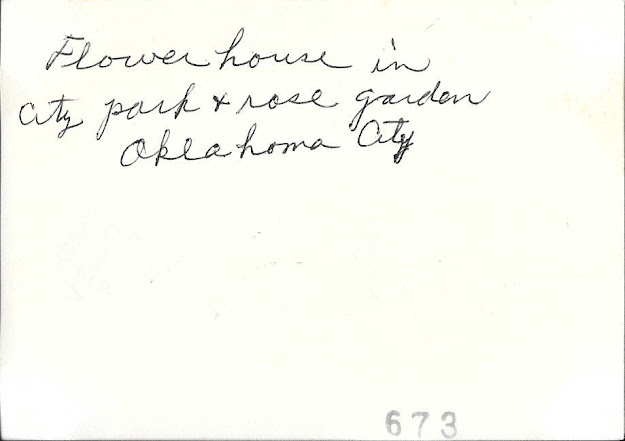 So of course I decided to look up those words and learn more. I was surprised to discover there are actually two possibilities for where this photo was taken. The Ed Lycan Conservatory at the historic Will Rogers Gardens, or the Crystal Bridge Conservatory at the Myriad Botanical Gardens.
Ed Lycan Conservatory
The jewel of the Gardens is the Ed Lycan Conservatory, a glass-enclosed Lord & Burnham greenhouse inspired by 19th-century Victorian architecture. The greenhouse was first installed inside Douglass Park near NE 10th and Eastern Avenue in 1924, on what were the grounds of the original State Fair park. It was moved to the Will Rogers Gardens in 1936, and later named after Ed Lycan, the Parks Department's first employee.
For many years, the Conservatory served as a popular venue for flower shows and gardening exhibitions. A 2013 renovation project revitalized the historic structure, and the Conservatory now houses one of the state's largest permanent collections of cactii and succulents. It is also available as an event hall for weddings and other celebrations.
About the Crystal Bridge Conservatory
The centerpiece of the 15-acre Myriad Botanical Gardens is the Crystal Bridge Conservatory, home to thousands of beautifully displayed tropical and desert plantings. Within the 13,000 square feet, you will discover 750 varieties of plants, a cascading waterfall and a sky bridge to experience stunning views into the tropical forest.
Its unique design has earned attention and praise in the architectural community. It is 224 feet long, 70 feet in diameter, and is covered by 3,028 sections of translucent, double-layered acrylic panels. The Conservatory includes 13,000 square feet of the plant display area in two distinct climates: the Tropical Wet Zone, which is at the south end and is watered daily; and the Tropical Dry Zone at the north end which receives water from April through September, followed by drought from November through March. Some 750 varieties of plants and multiple waterfalls cascading from a total of 35 feet round out the spectacular features of the Conservatory.
How is it that Oklahoma City, with a metro area population of roughly half that of the Portland metro area has two conservatories and we have none? Just doesn't seem right...
Weather Diary, July 13: Hi 80, Low 54/ Precip 0
All material © 2009-2020 by Loree Bohl for danger garden. Unauthorized reproduction prohibited and just plain rude.