The spikes of Portland...

Last weekend was the Hardy Plant Society of Oregon's huge Study Weekend event. Over 400 people from mostly the PNW, but also country wide (California, Pennsylvania, Connecticut to name a few) converged on Portland for three days of lectures, plant and book sales, and of course garden touring. As I motored from one NE Portland garden to another I realized I was driving right by one of the famous BIG Portland agaves, naturally I stopped. 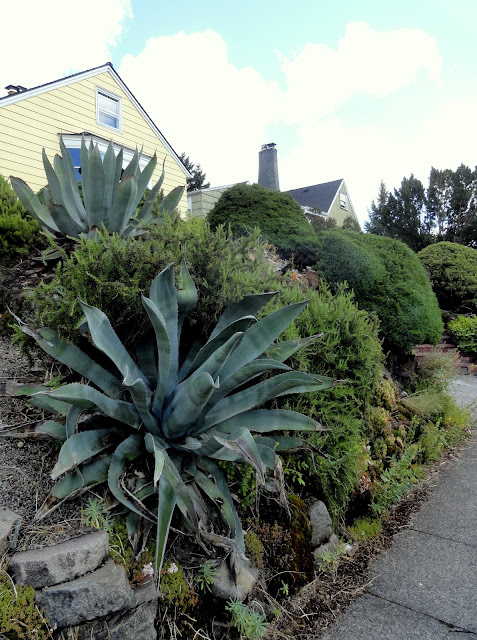 This agave hadn't been looking so good the last few times I drove by, and in fact I was afraid it would be gone, dead, dried up. Actually it's looking much better now... 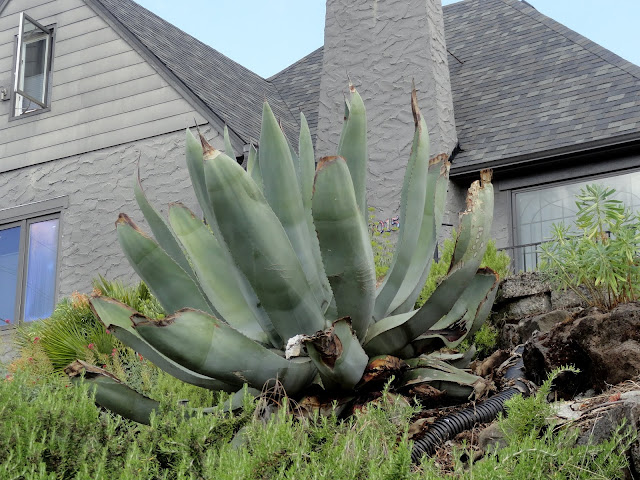 Although it's pup has eclipsed it in size and form. 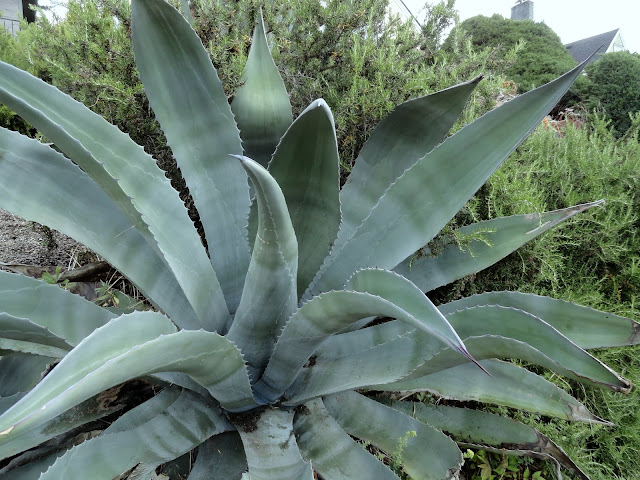 Clicking on the hashtag #portlandagave I found a Instagram post by @creativelandscapesinc calling this a ‘Silver Surfer’ Agave. They went on to write "Sean Hogan @cistusnursery gave me this 20 years ago and I planted it on Alameda Ridge in NE Portland. This large Agave has built up quite the reputation around Portland and has even been featured in the Oregonian!" It was interesting, because the photo they posted seemed to show a much healthier top agave than the one here, or that I'd seen myself closer to the Sept 2018 date of the post. Maybe it was an old photo. 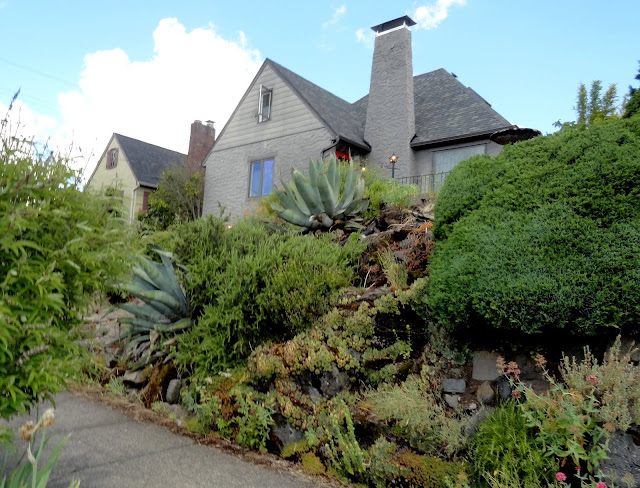 I could also, barely, make out a pile of crispy agave leaves too. Curious. 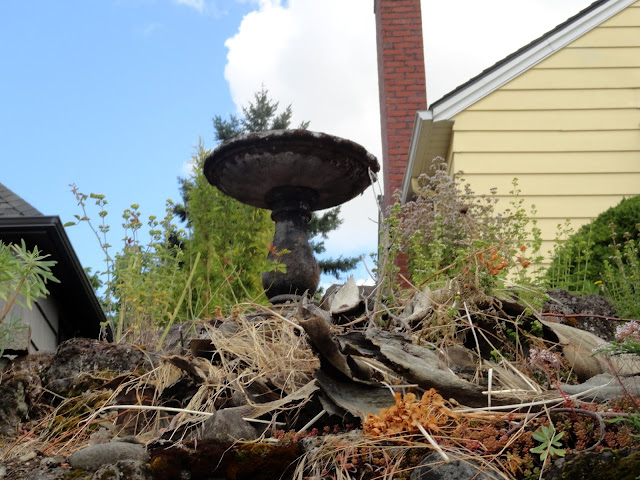 Of course I couldn't leave without taking a pic of the sea of green sempervivum. Nice, right? 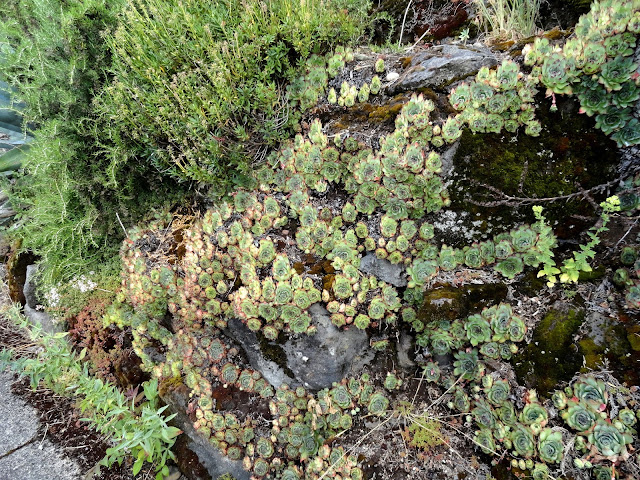 The next garden I visited (that of Erin and Brian Ray, part of the Study Weekend tours) also featured a nice collection of sempervivum. 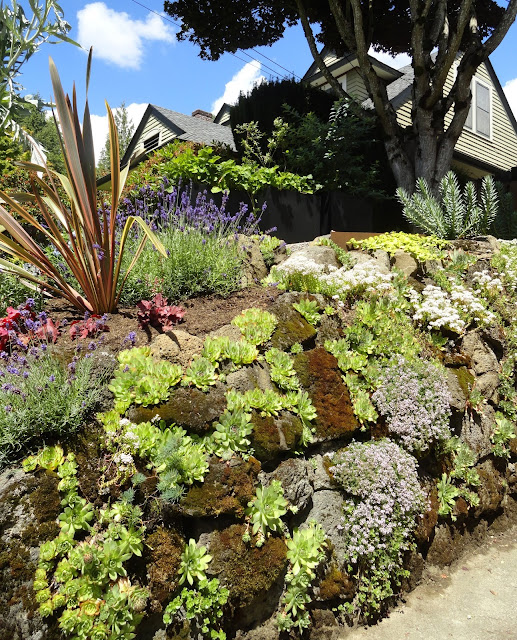 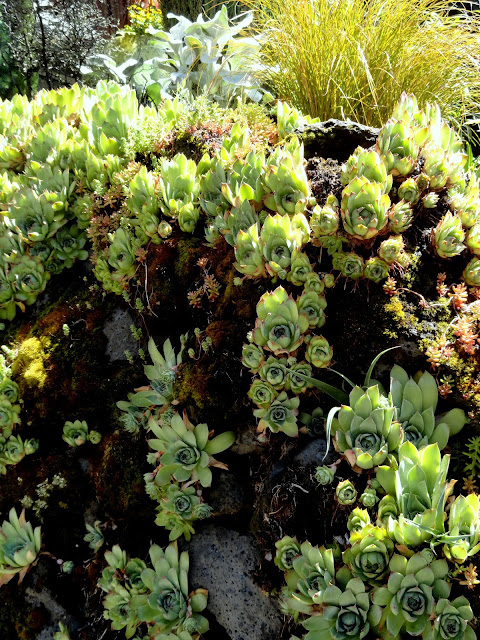 I should of ask her how many were stuck in the cracks of the rocks to get things started, and how long it took. 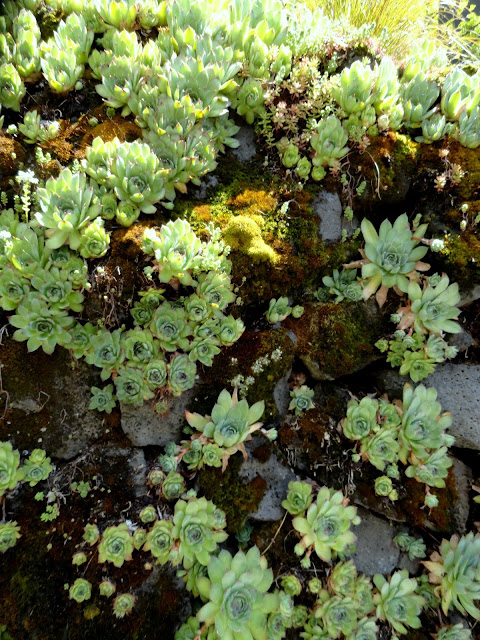 The next spiky sighting came thanks to a tip from London Bellman. He'd mentioned this blooming cylindropuntia, and as I was driving by I remembered it just in time to pull over and snap a few photos. 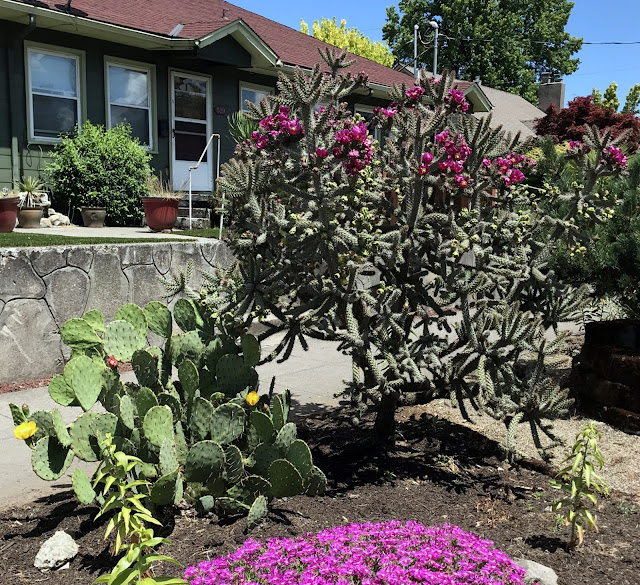 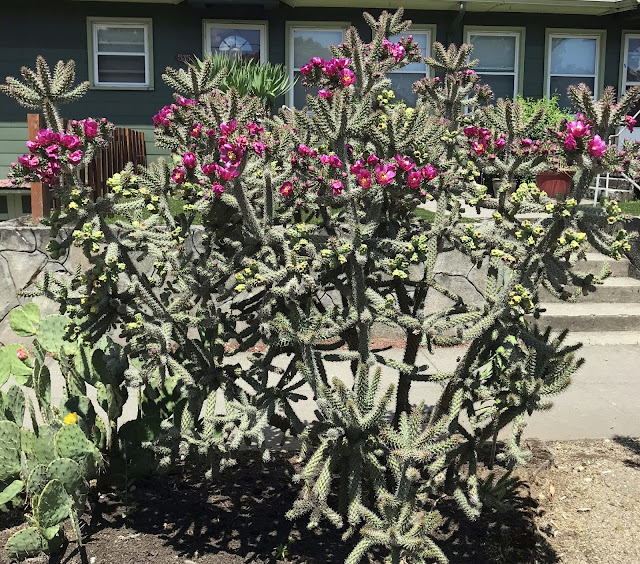 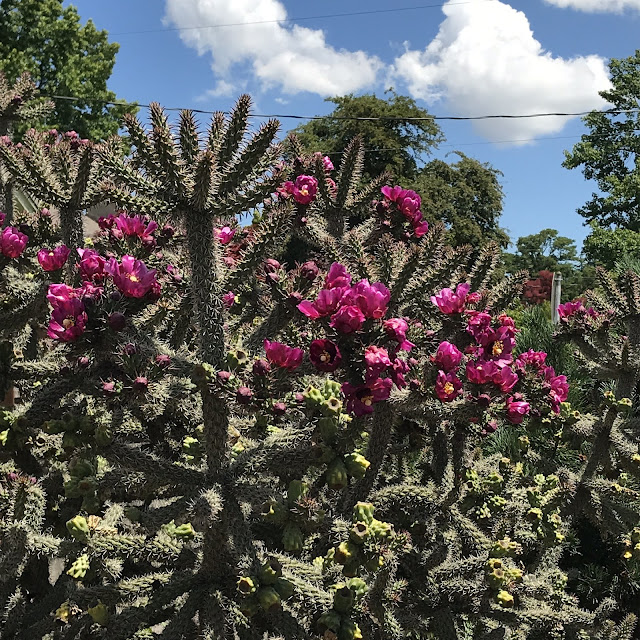 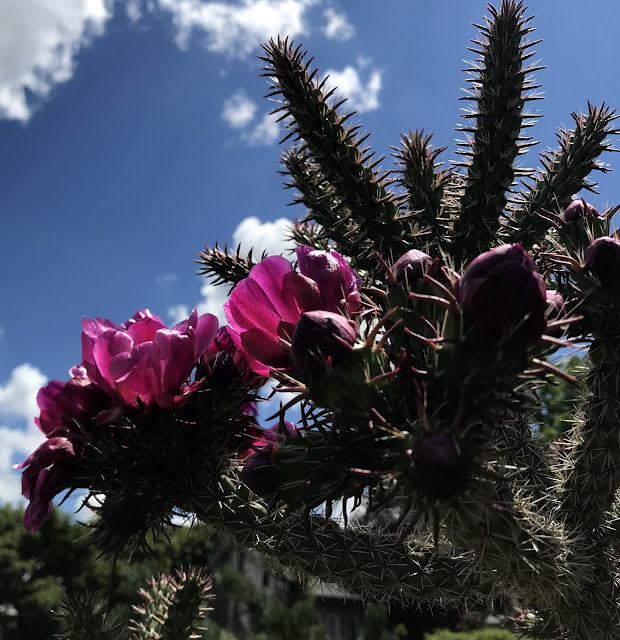 The opuntia blooming in the same garden were a mix of yellow and this lovely coral. 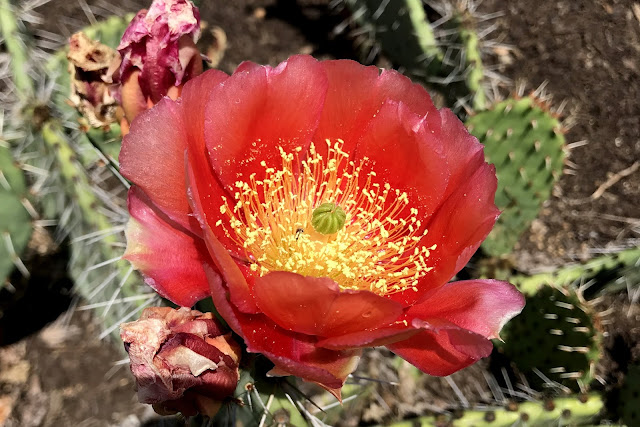 Since we're talking spikes I thought it a good time to update you on the blooming agave at "my" Mediterranean Villa. 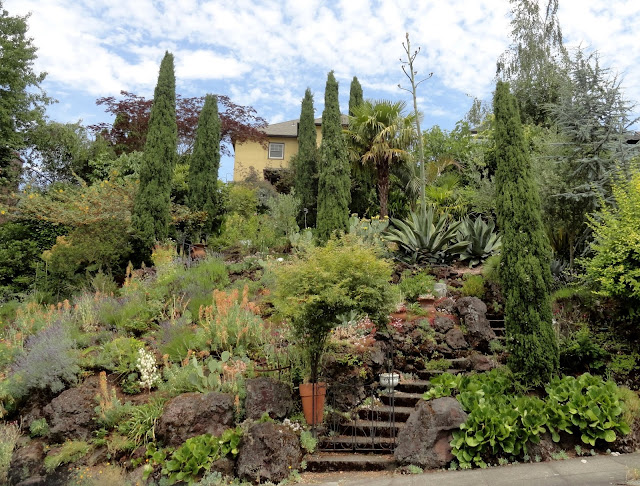 Things are definitely starting to happen at the top of the spike. 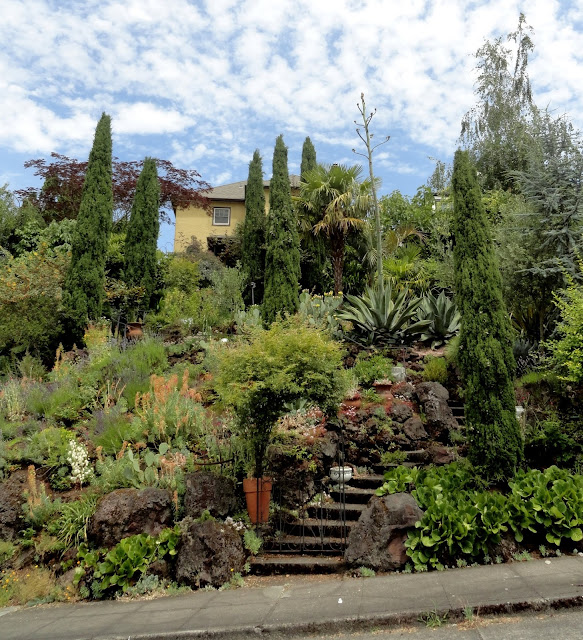 It won't be long now. 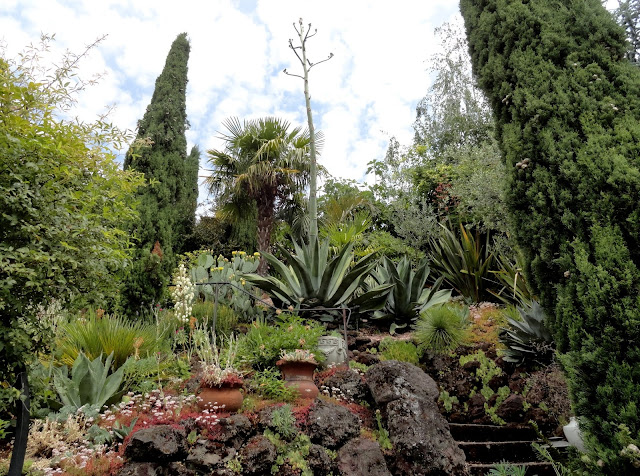 And then we'll watch the demise of the big mama plant. 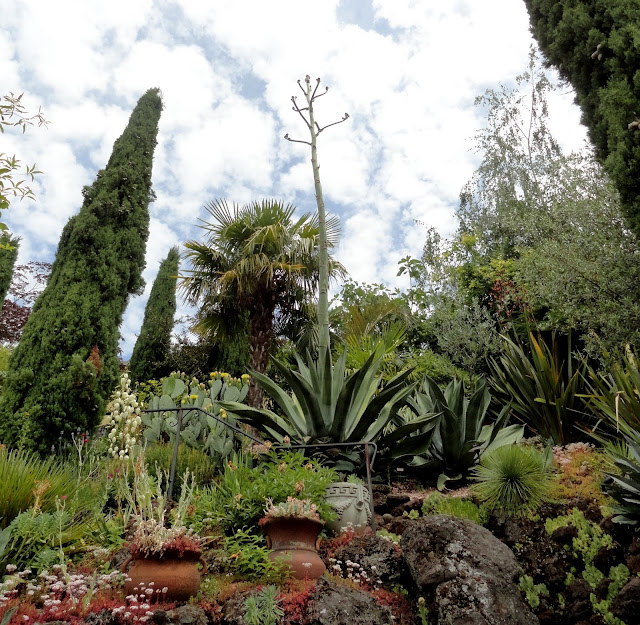 Thankfully there are lots of her babies around the garden, heck, and around town; thanks to my being allowed to dig several last August. 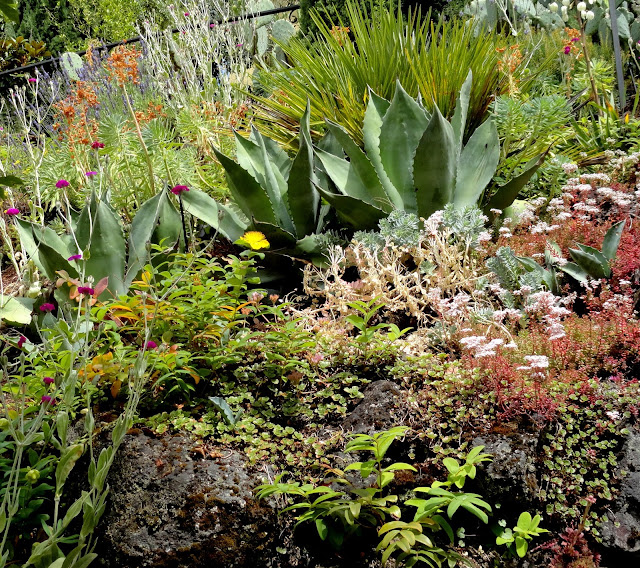