Mahonia, they're my favs at the end of November

Here it is, the last Friday of the month. Also that infamous shopping day, which I'll be completely ignoring, unless it's a nursery visit or maybe a stop at a thrift shop if I'm really feeling crazy. Most importantly — for purposes of the blog — it's the day I post about some favorite plants, ones that are currently standouts in the garden...

I came up with the idea to do a Mahonia theme this month, seemed like something I might have done before so I checked, nope! Then after taking pics, editing and uploading them I discover that I did do a similar post in January of 2015, oh well...they can't all be original ideas! 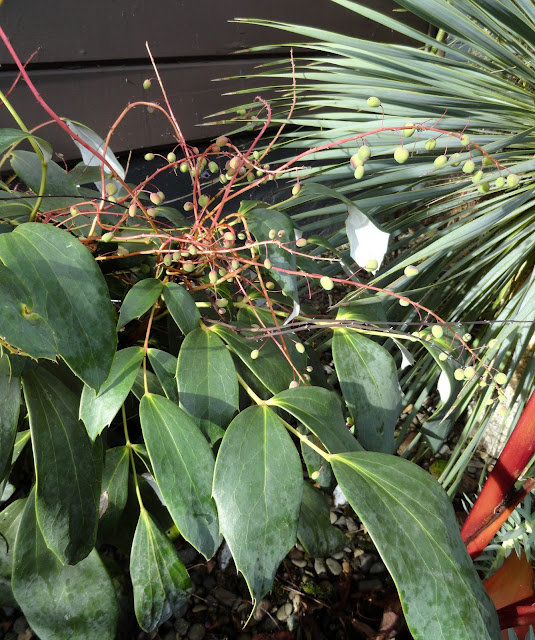 It's the time of year the Mahonia gracilipes develops its fetching pink stems and blue/purple berries. I love this plant! 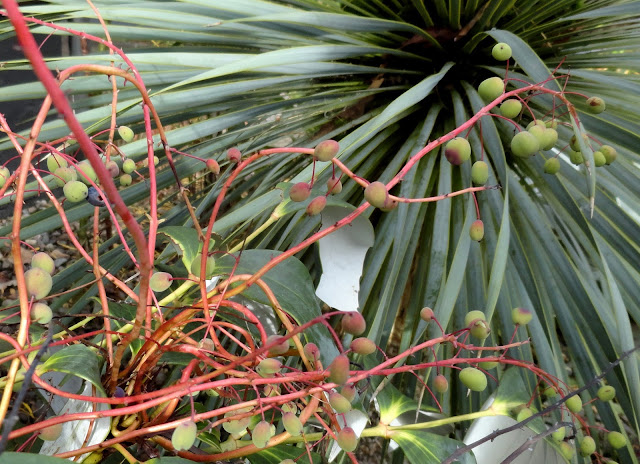 The white undersides of the leaves are pretty cool too. 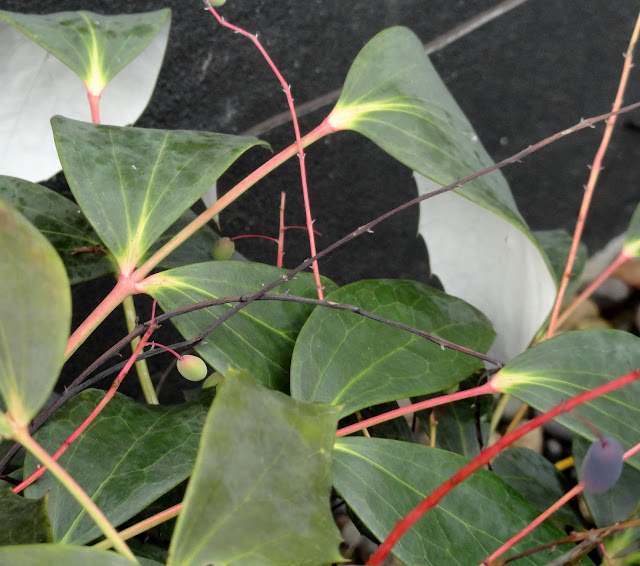 While visiting a nursery late last autumn, I mentioned my Mahonia gracilipes didn't color up as well as theirs was had. The owner thought maybe it's because mine was in too much shade, so I bought a second and planted it out where it would get more sun. 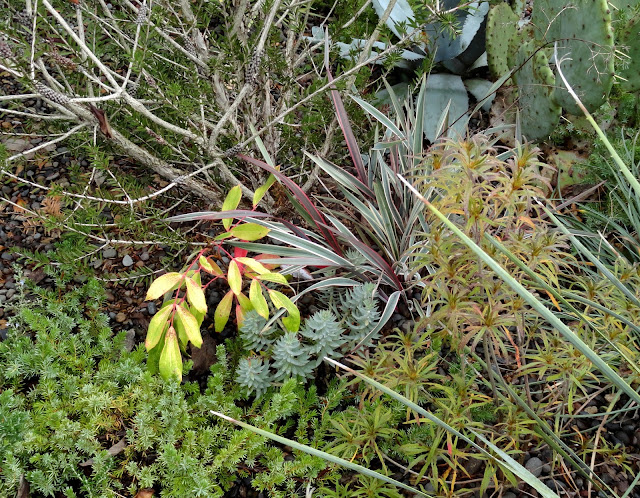 Yellow wasn't the color I was hoping for. 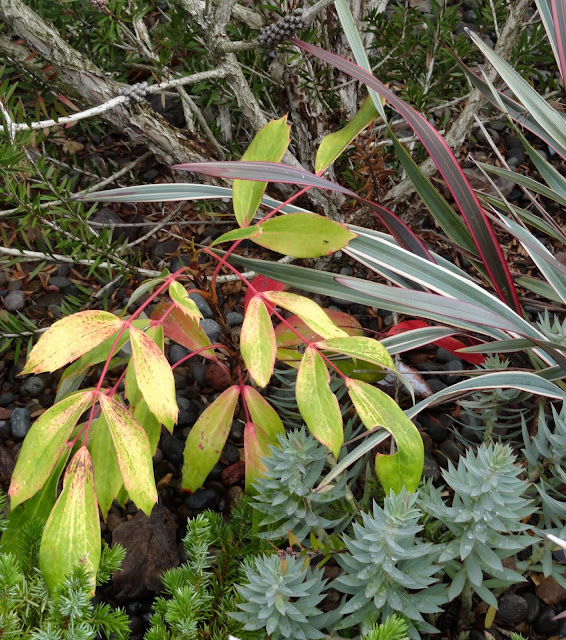 Mahonia fortunei 'Curlyque' and M. x media 'Charity' — on the north side of our house, that's our neighbor's driveway. 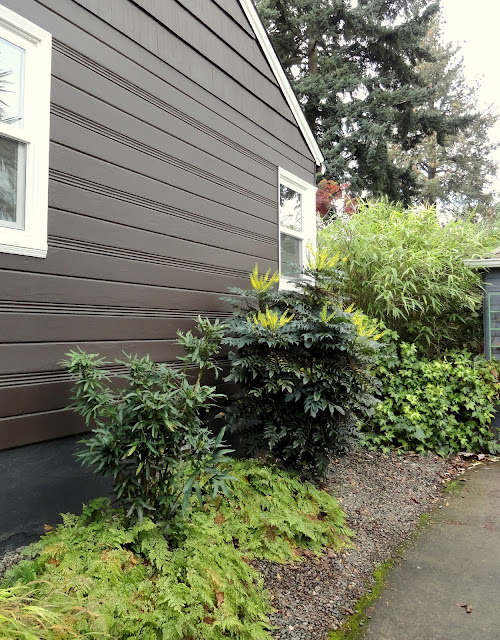 The new growth on this M. fortunei 'Curlyque' is to die for. Sort of a semi-glossy brown/red. 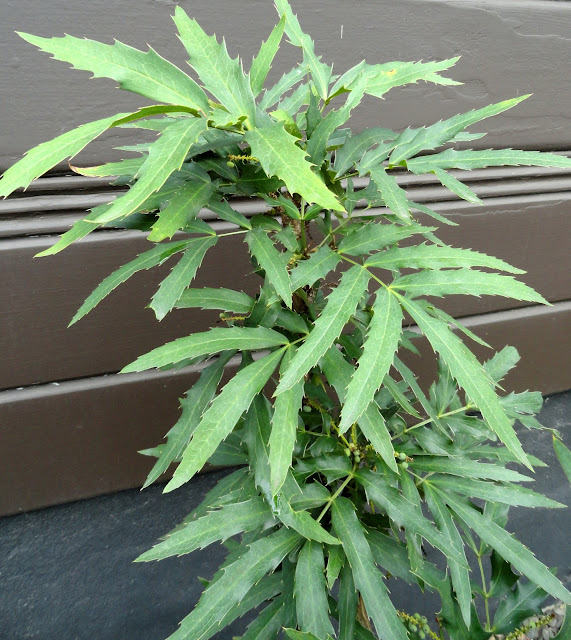 The older leaves have a twisty-ness to them, thus the 'Curlyque' part of the name. 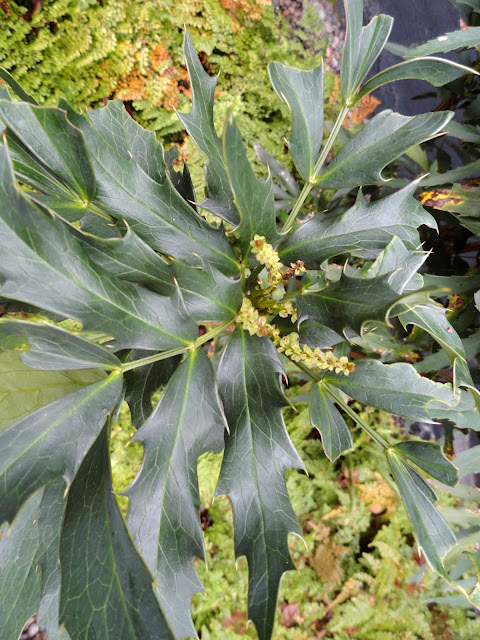 Unfortunately this is also a characteristic of this plant, at least for me. I hacked it way back last spring and it made a nice rebound, with less ugliness. 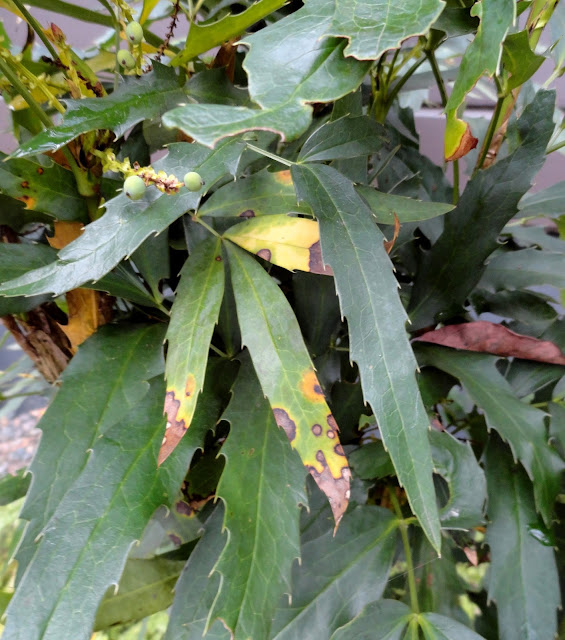 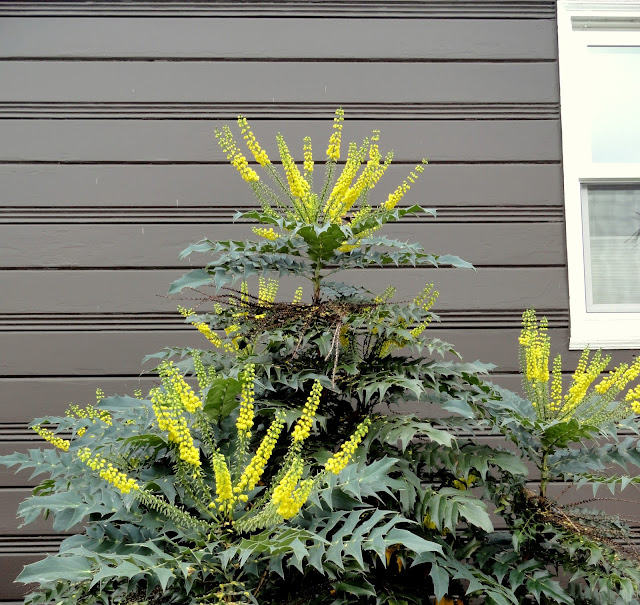 Well except for this. I don't remember the previous year's bloom sticks being around into the next bloom cycle. If I weren't feeling so lazy when I took this photo I would have stopped to pick them all off. 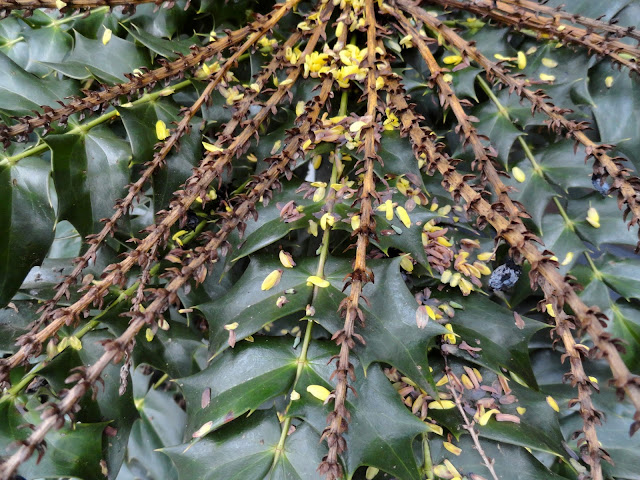 I'm glad I gave this plant the room it needs to really spread out. Of course my neighbor who parks near it might have a different opinion on that. 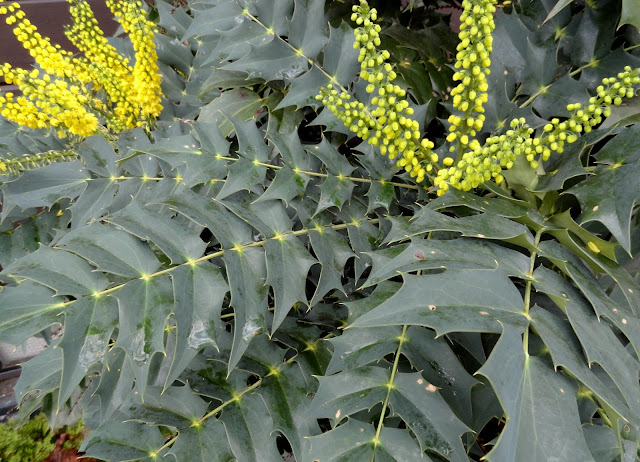 I usually include cultural information when doing these "favorites" posts but today I'm just linking the name to the plantlust.com listing for each. The info, as well as nurseries that have grown the plants, is all there! The low ferns are Adiantum venustum, and that's a Fatsia japonia on the other side of the chimney. 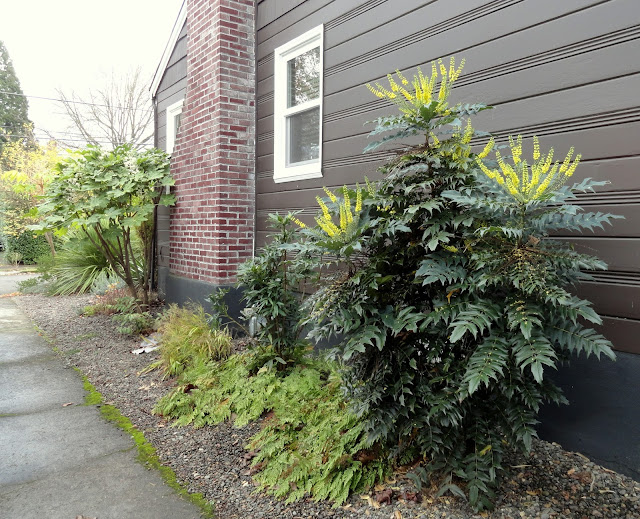 Now we're in the back garden. On the left is another Mahonia fortunei, this one is ‘Dan Hinkley’ 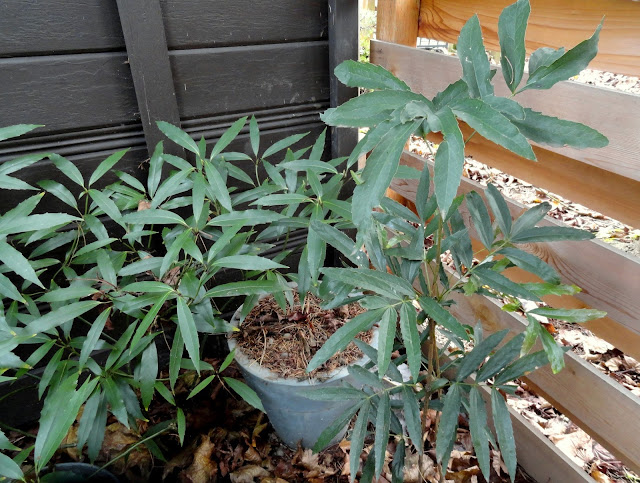 It's growing in the corner behind our garage and next to the fence. You can't really see it in the garden, because it's behind the Podophyllum pleianthum stock tank. My hope is that it will grow up and block the corner where the garage and fence meet. Since I cramscape everything there's also Aucuba japonica var. longifolia on the left for the same purpose. That container used to hold a Ligularia but it's either gone dormant or died. Don't judge! 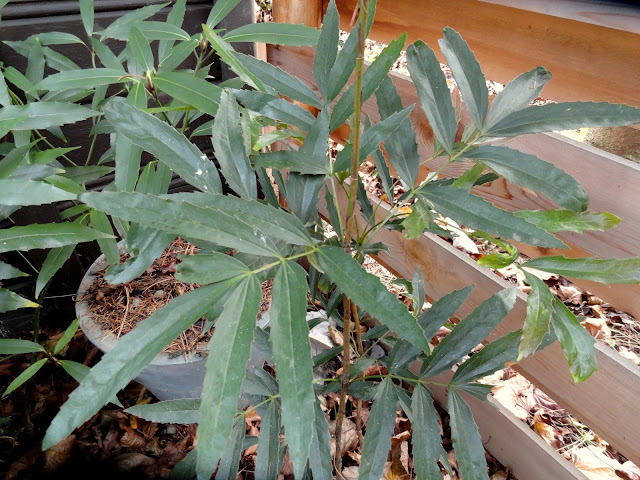 Finally I am thrilled the Mahonia eurybracteata 'Soft Caress' is looking so good... 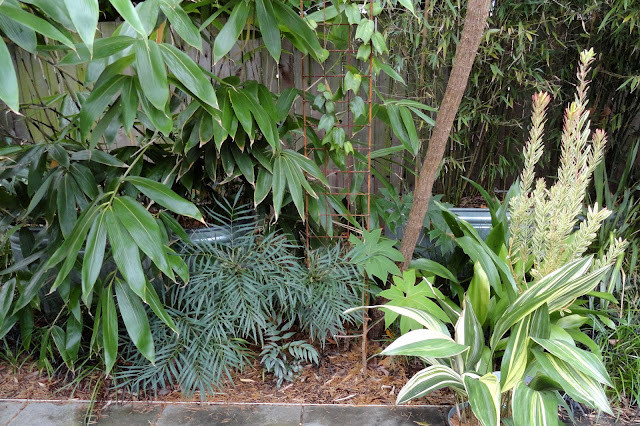 Andrew refers to this Mahonia as "that short palm by the patio"...I guess I can see why. 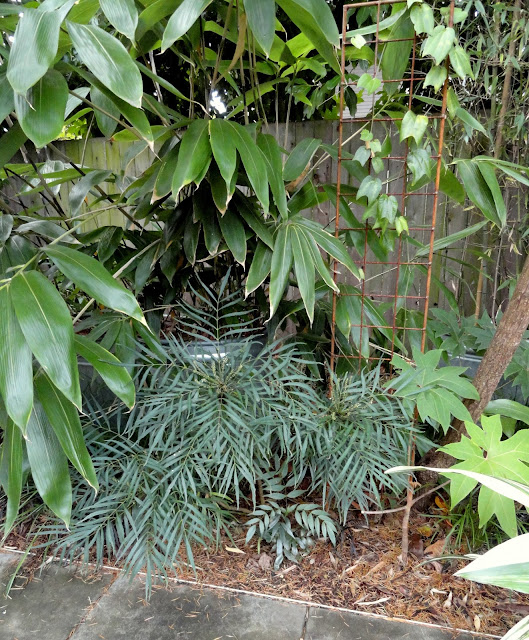 Did you spy the small Mahonia eurybracteata 'Indianola Silver' under the 'Soft Caress'? I am also quite pleased with how it's doing. I'd allowed it to become hidden by a sprawling Persicaria and moved it last spring. It's put on a lot of growth. In previous years it colored up like Evan's in this post, fingers crossed it will do it again this year. And yes it really is that pearly silver/celadon color. 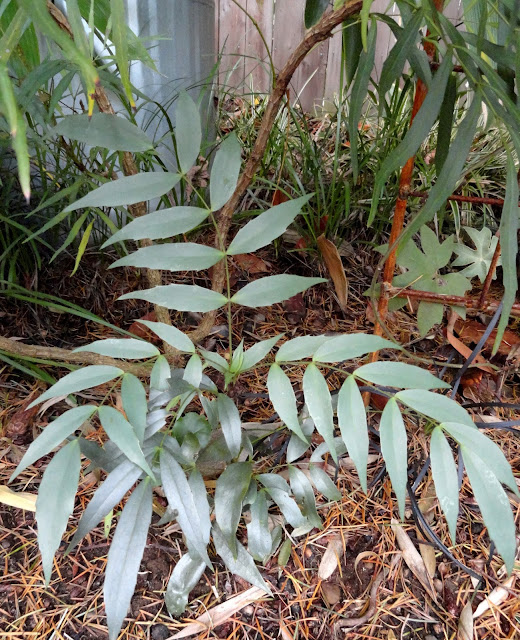 That's my Mahonia-centric favorites post! I left out another Mahonia eurybracteata 'Soft Caress' that's in a container and looking bad. Note to self...get that thing in the ground! Also missing is a Mahonia nervosa that's camouflaged under a monster Cordyline. I haven't moved it because I know the Cordylines are living on borrowed time and will get cut back by a harsh winter. It's happened twice before, they always return from the roots. In the mean time the Mahonia will get to star in that space for awhile. Sooo...anything you want to report, "favorites-wise" from your garden? Please tell us about it in the comments!