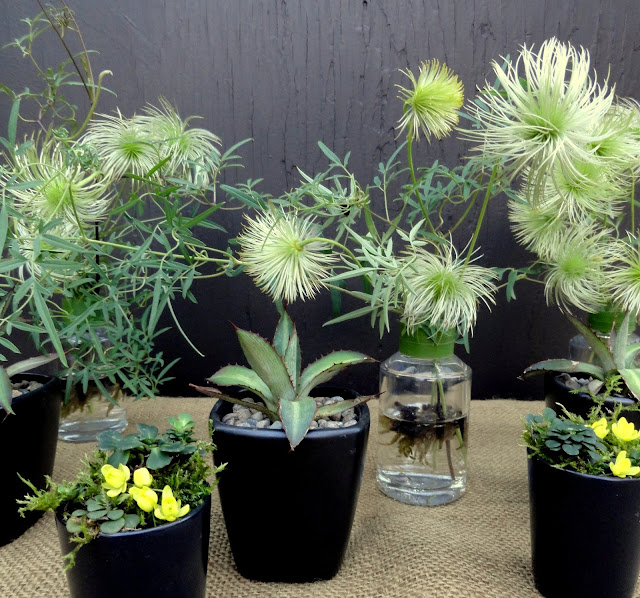 If you follow Rambling in the Garden, the blog of our In a Vase on Monday leader, Cathy, then you know this is the 3rd Anniversary of this fun Garden Blogger's meme. As such she proposed a theme for this week's vase creation: "3". I immediately thought of these glass bottles I saved from a sampler box of Raft Syrups (really tasty by the way!). 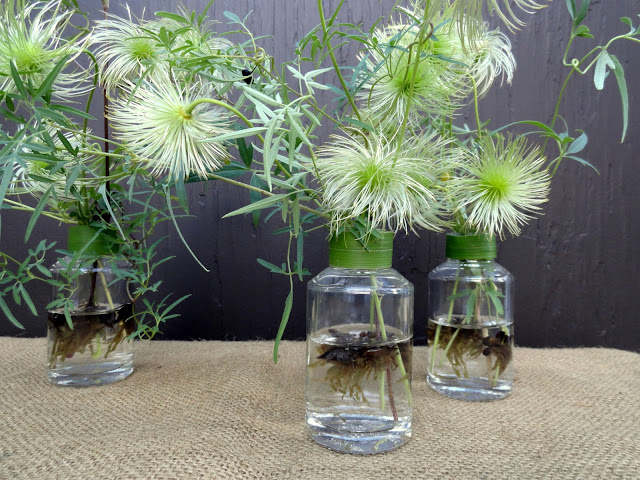 I'm not a fan of clear glass vases, to me the visual clutter of the seeing the stems takes away from the beauty of what's in the vase. In an attempt to counter that reaction I decided to treat the water as part of the arrangement. I dropped a few bits of Salvinia minima from my pond in each of the bottles... 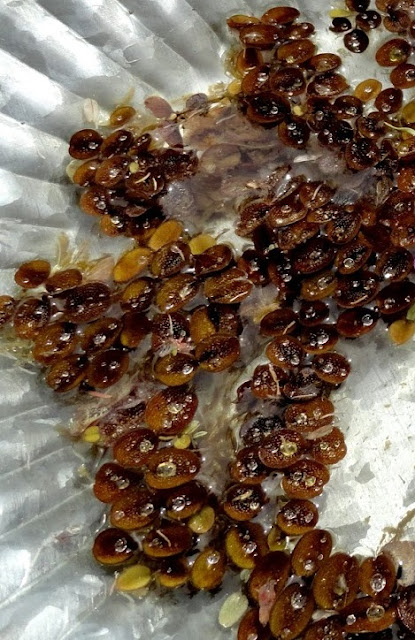 The top of the bottle also annoyed me a bit, with threads where the lid screwed on. 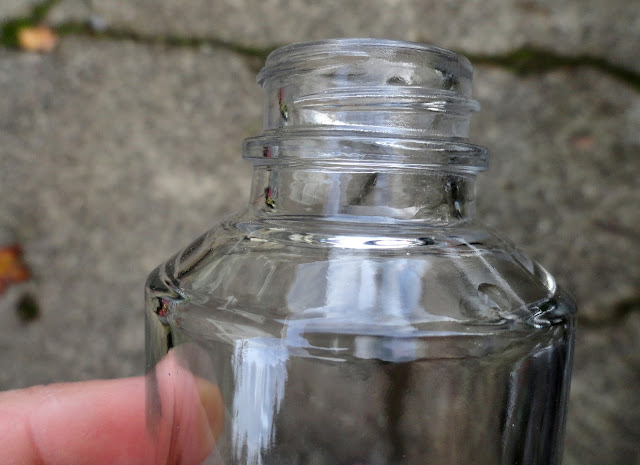 So I wrapped a bamboo leaf around it, much better! 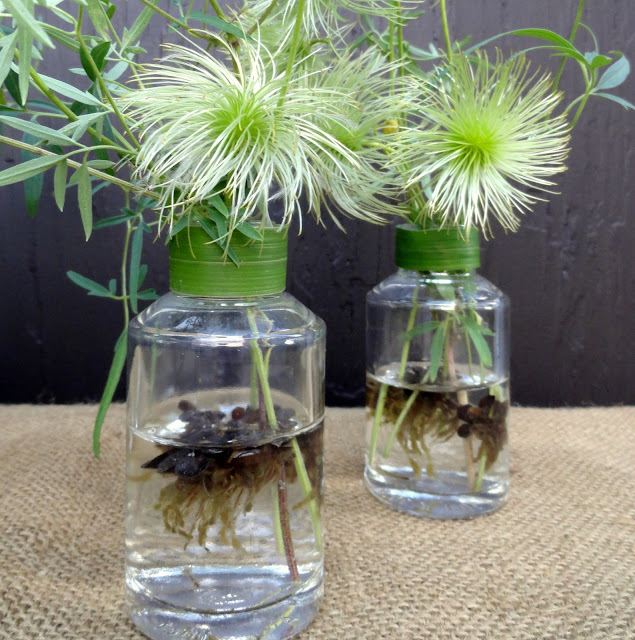 After mentioning in Friday's post that my Clematis tibetana seed heads were usually ruined in the rain, I'd noticed they were actually looking really good — so into the bottles they went. 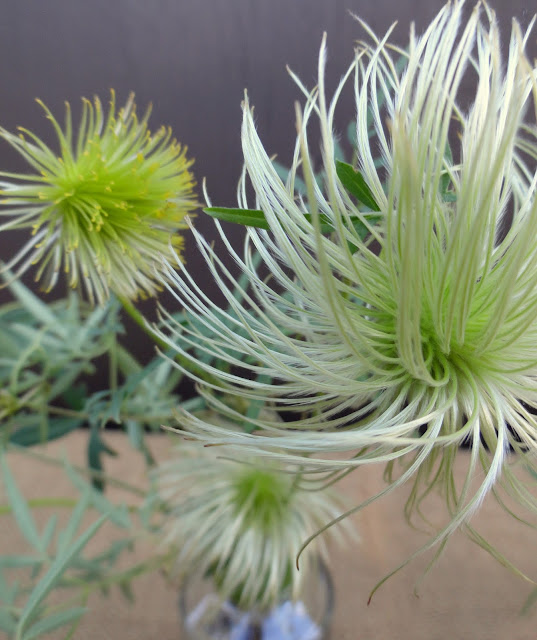 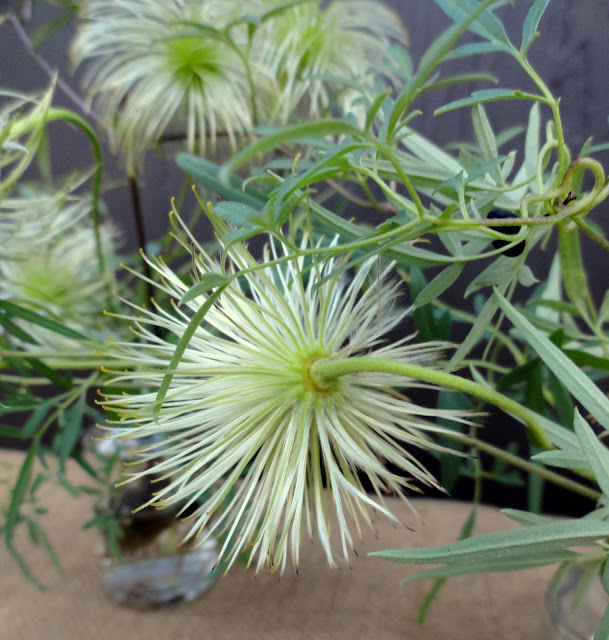 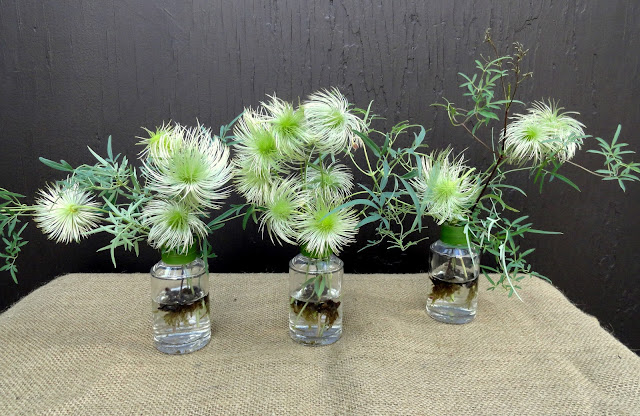 But why stop there? I also have a set of three black sake cups... 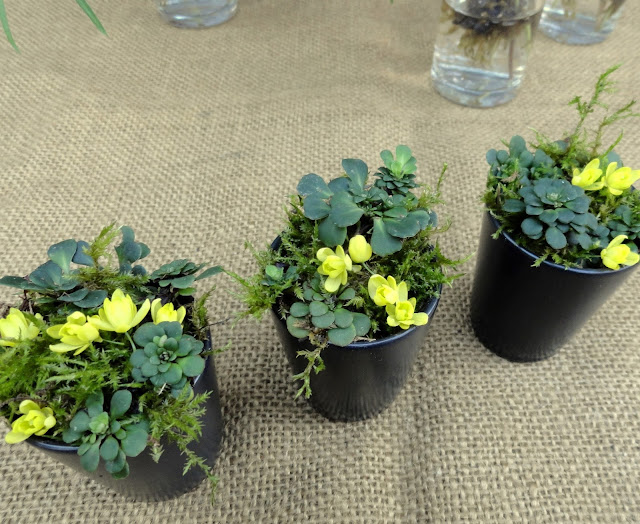 And when I noticed how the moss and Saxifraga ‘Primuloides’ were mingling I decided each cup should hold a bit of both. Of course a smart person would have taken the photo before she pulled out clumps but hey, use your imagination... 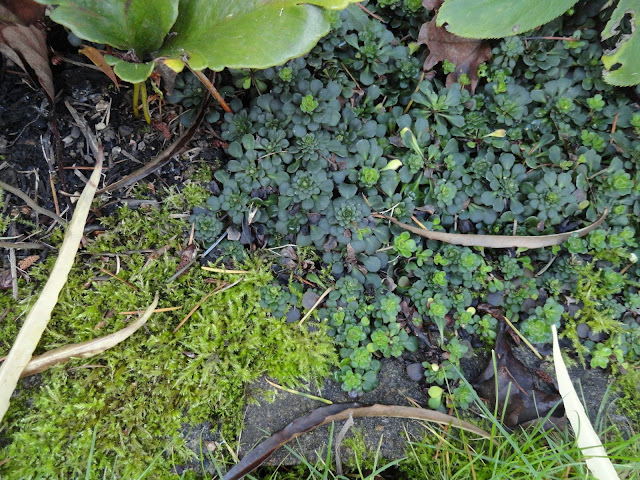 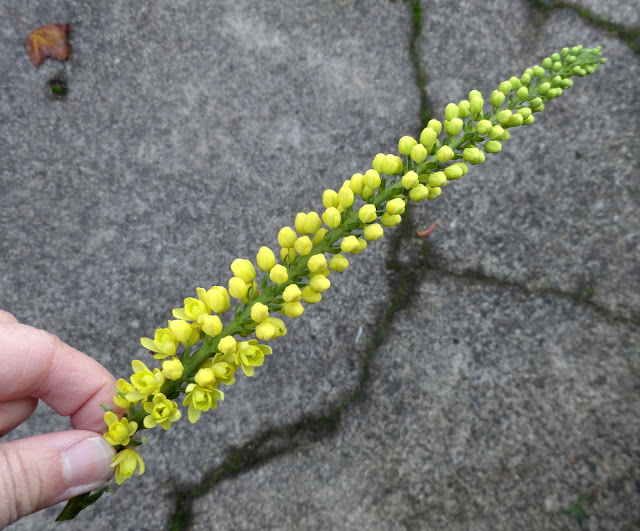 And the arrangement was complete. 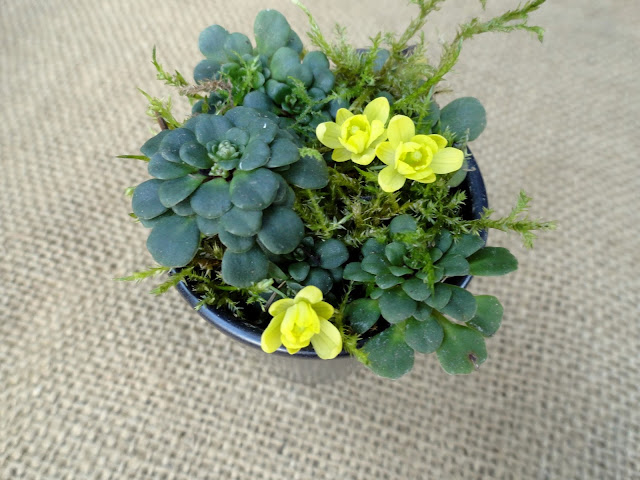 As a bonus the Saxifraga can be put back in the garden when I'm finished with these and root to live on. 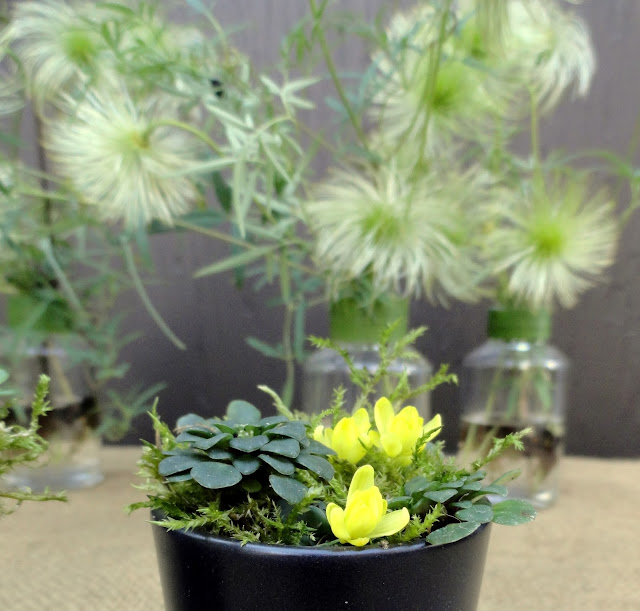 Hmm...so that's two sets of three. Shouldn't there be a third? 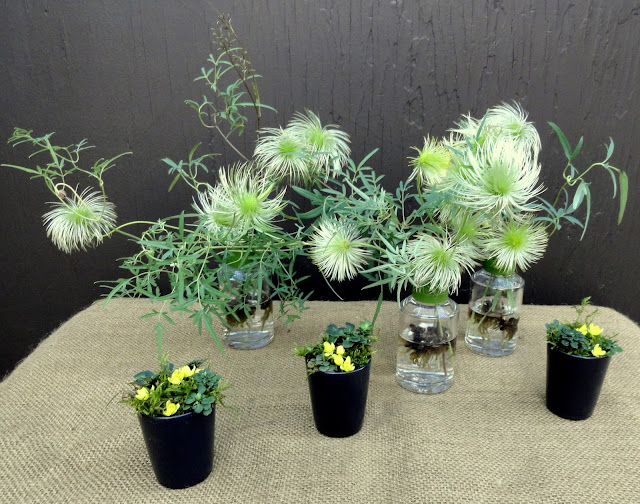 Indeed! The three Agave lophantha 'Splendida' pups I used in my "it takes a village" vase creation were overdue to be potted up and I happened to have three little black pots found at Goodwill. I thought about just sticking them in water, so they'd fulfill the "vase" part of the title, but heck. Poor things deserve a little soil after two months... 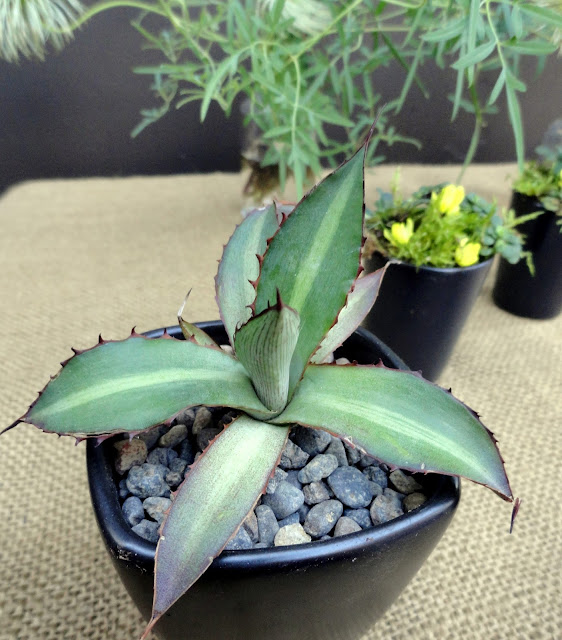 And so there were three collections of three... 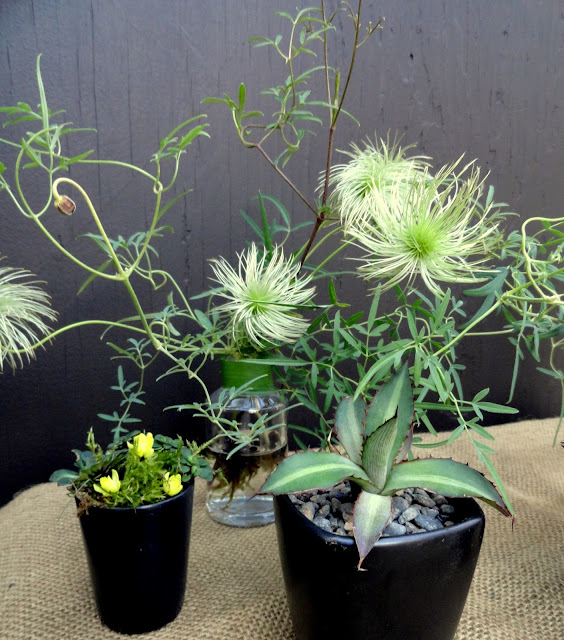 And a small crowd! 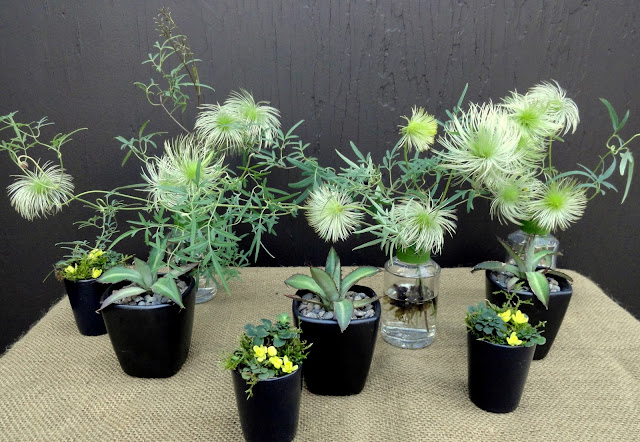 The first two go on the kitchen counter... 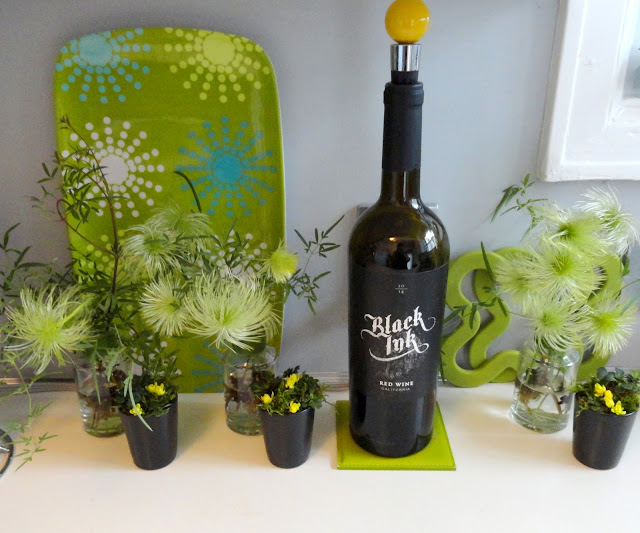 Something fun to look at that doesn't take up too much space. 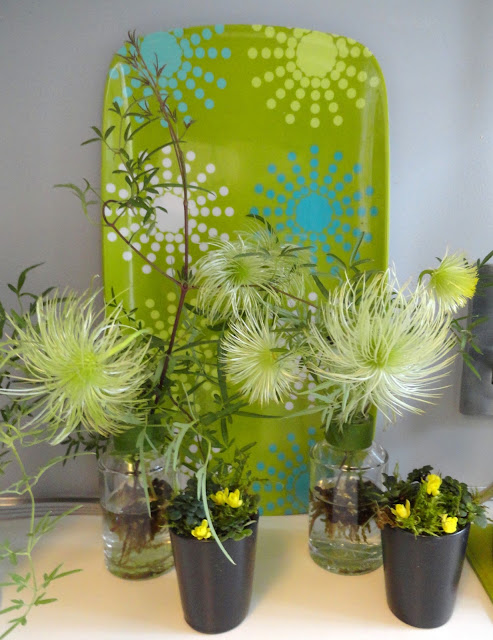 And the Agave pups are hanging out on a window, since (sadly) we won't be opening windows everyday for a few months now... 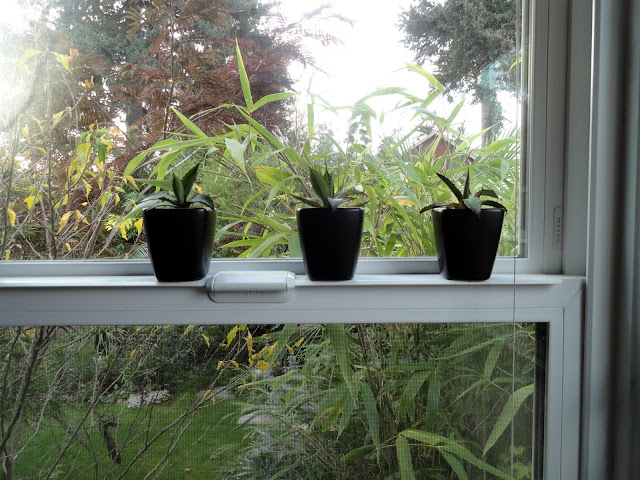