In a Vase on Monday; it takes a village

Here we are, it's Labor Day in the USA. For many people this means summer is over, it's time to dig out the sweaters, surround yourself with pumpkin spice everything, and retreat indoors. You know me though, I'm fighting that idea tooth and nail ("Rage, rage against the dying of the light"). Hence this week's vase creation is one for the patio table... 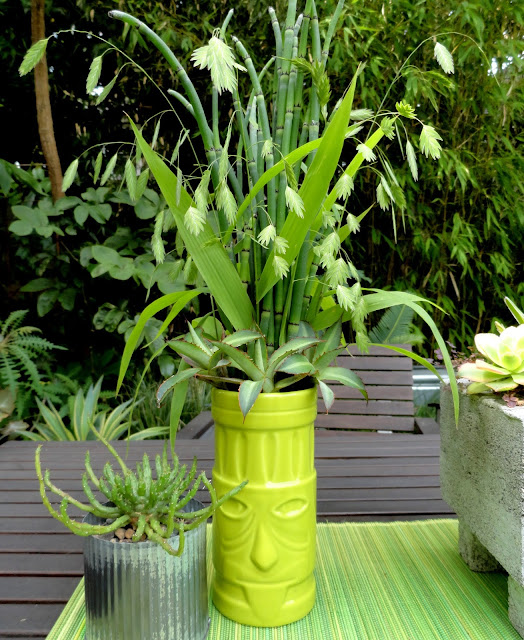 I practically squealed with delight when I spotted this tiki mug at my local Crate & Barrel back in May — I knew it would make a great summer vase. Then the first time I went to use it, I broke it. Before stopping to pick up the pieces I was online ordering a replacement, but it was not to be. There were no more available online and my store was sold out. However, thanks to the magic of online inventory, I could see the Seattle store had them in stock and as luck would have it I happen to have a blogging friend who lives near by...and she agreed to pick one up for me! So thanks to a village — Emily to buy the mug, Peter to bring it to Portland (THANKS GUYS!) — I now have a replacement... 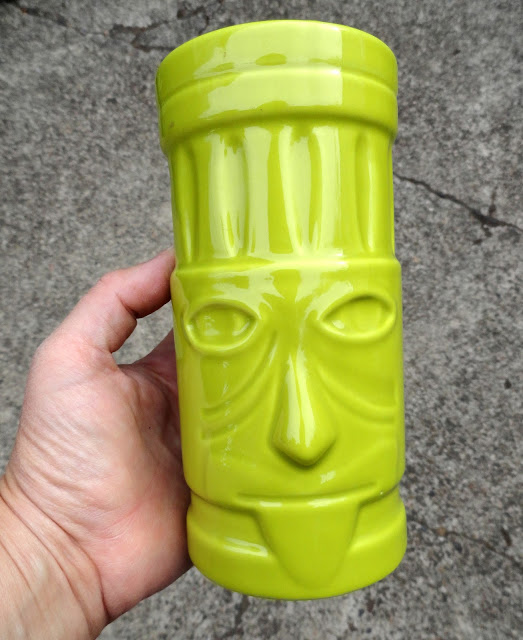 But what to put in it? Well the Chasmanthium latifolium (aka Northern Sea Oats) were begging to be used, those fabulous dangling blooms moving in the slightest breeze. 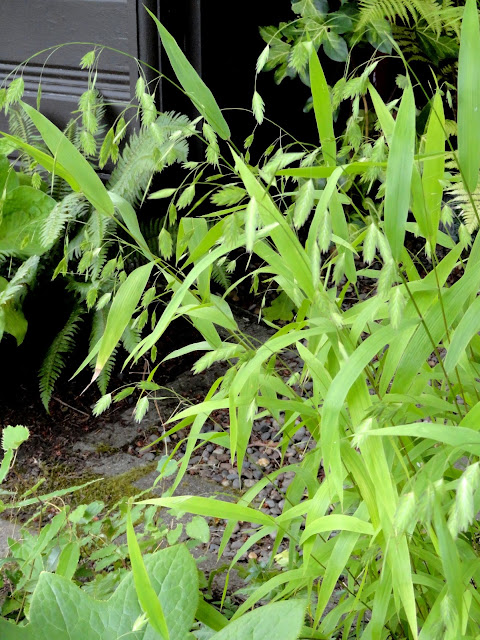 Then there is the horsetail rush (Equisetum hyemale). Known to strike fear in anyone who's ever had to battle it, mine grows in a large stock tank. I love this plant. For a long time it loved me back. However as the plants around it have grown it's getting more and more shaded out and not looking so good. I've been staring at it a lot lately, trying to decide if it's time to let it go (I think it is). I decided to pay tribute by including it in the vase. 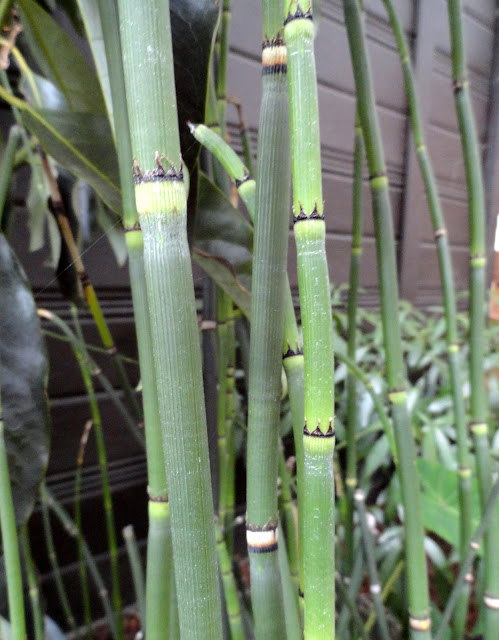 Finally I needed a flower...or did I? This poor tortured Agave lophantha 'Splendida' has been putting out pups at an amazing rate. What if I used them instead? 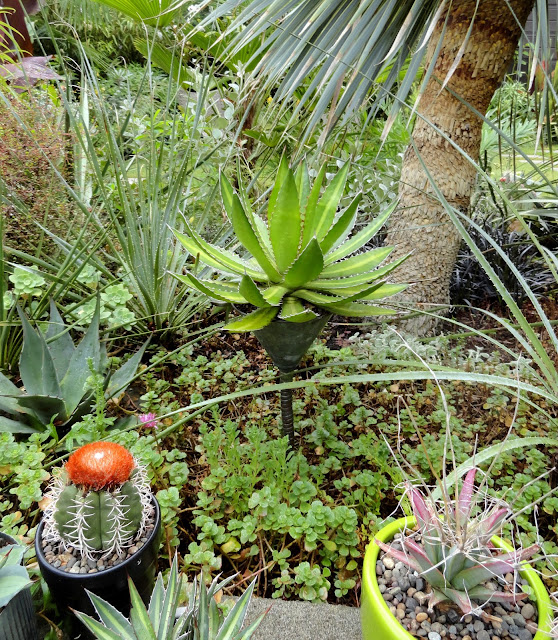 This one was too small to cut so I left it to grow on a bit. 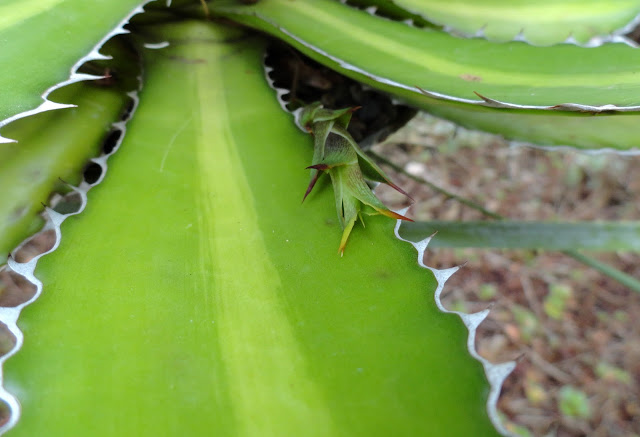 It's a beautiful Agave! 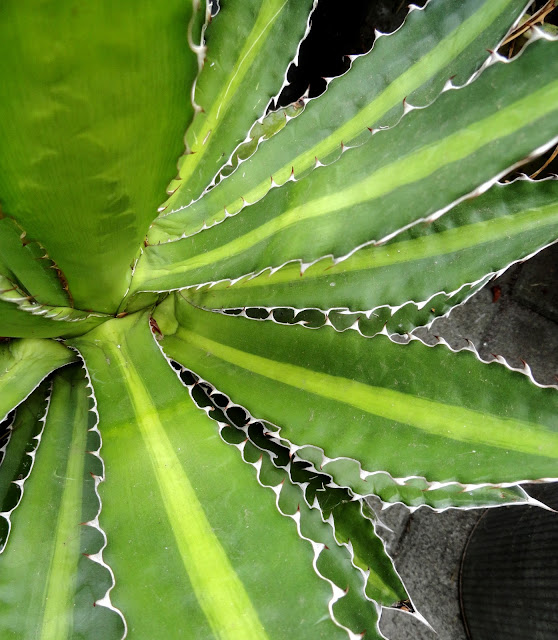 I wanted the horsetail to stand straight at the center of the vase, so they got a rubber band around the bunch. 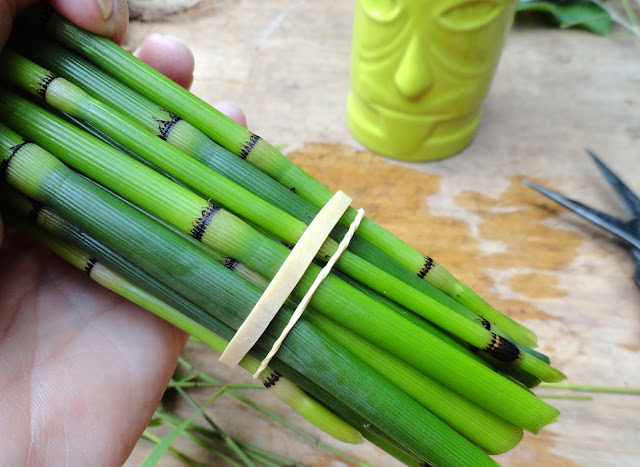 After that I just tucked in the other bits and the vase was done... 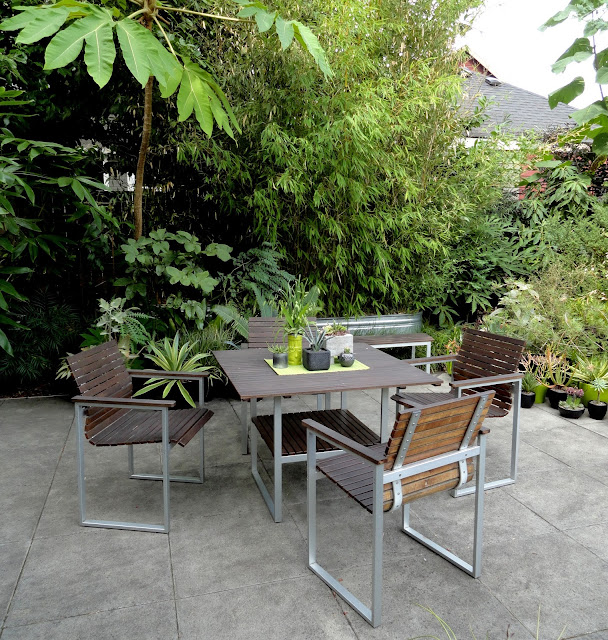 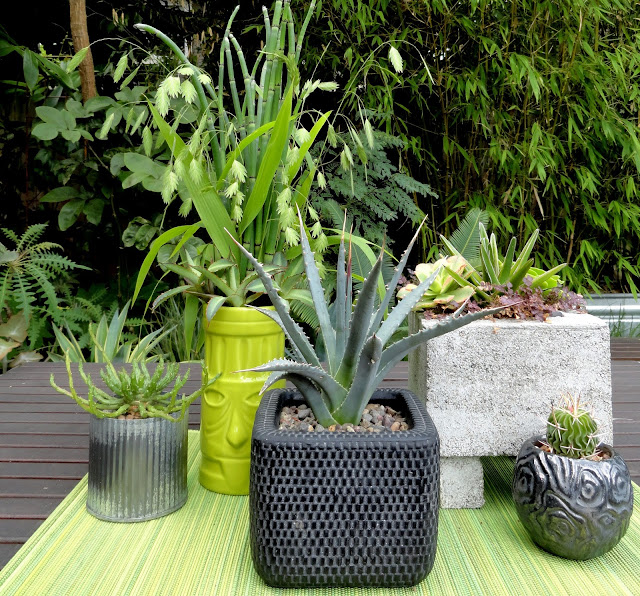 And I think the pups make great flower substitutes. 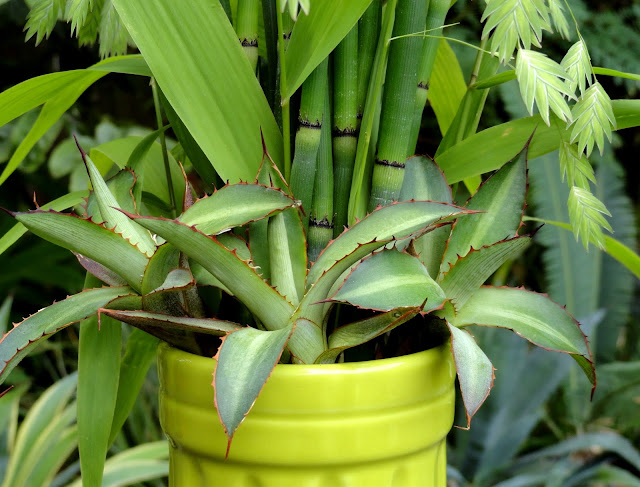 Working with the horsetail had me falling in love with it all over again. I think when I dig it out a chunk will be potted on for use elsewhere in the garden. 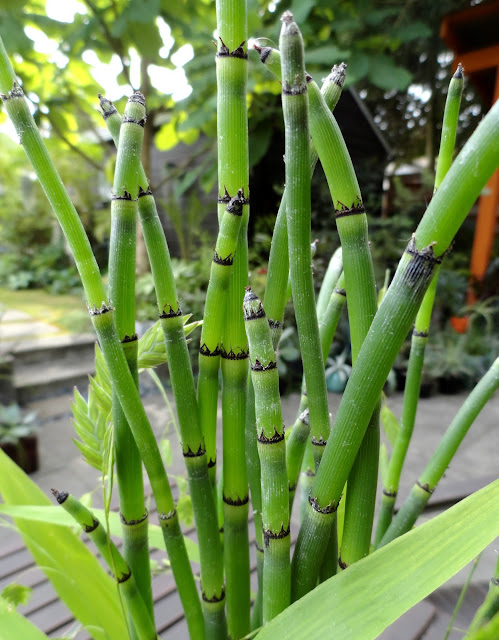 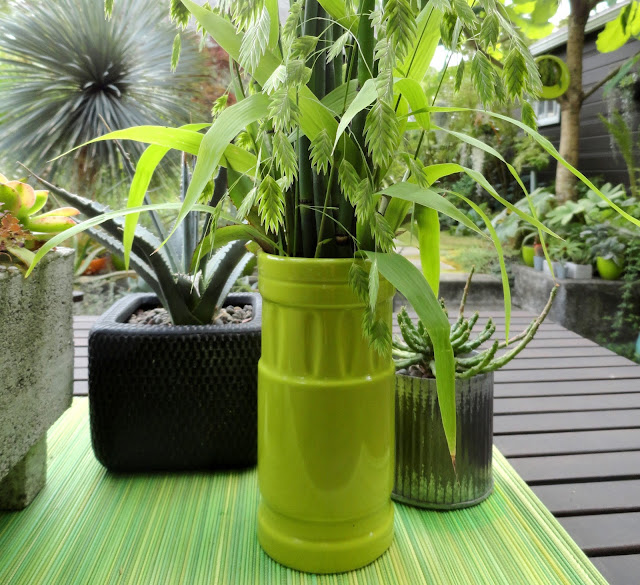 And another from the front. 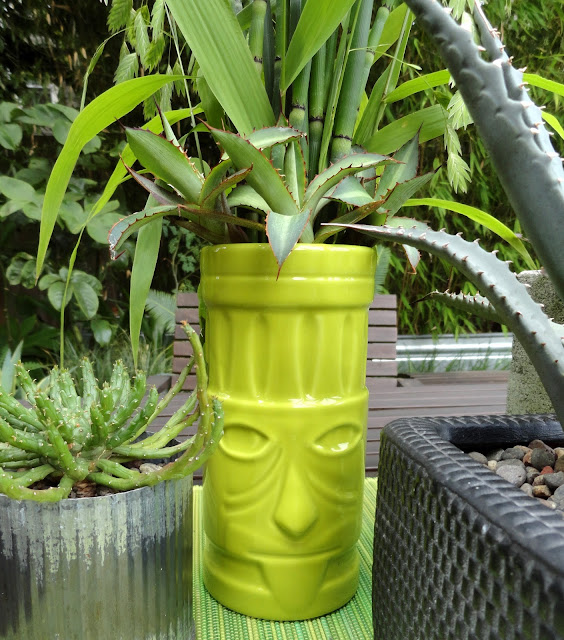 So much detail to appreciate, even if there's not a lot of color. 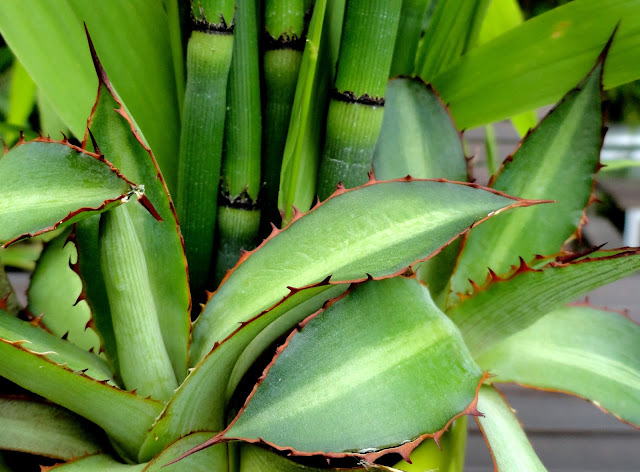 Monday "garden vases" are hosted by Cathy at Rambling in the Garden. Click on over to see how she, and other participating bloggers, are marking this, the first Monday of September. 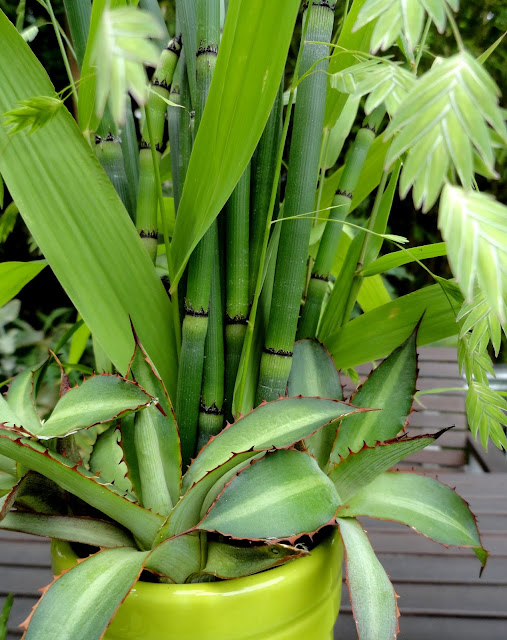 And if you're a fellow American I hope you're enjoying the holiday! 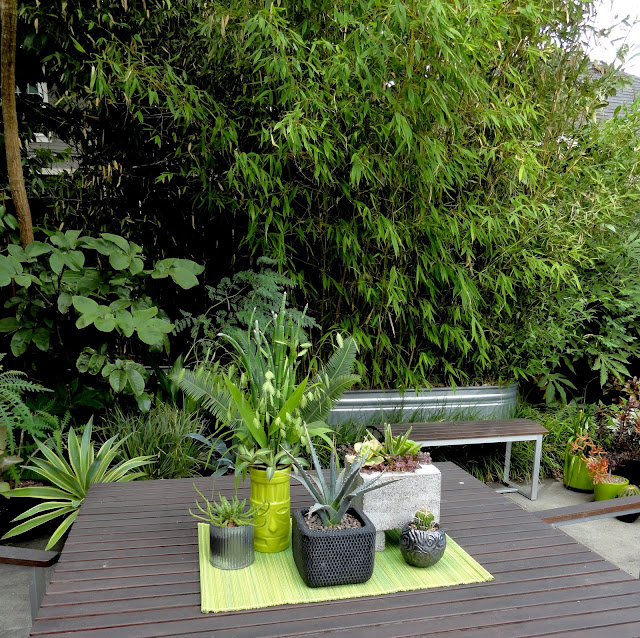