Big Leaves, Little Flowers - in a Vase on Monday

I've mentioned my admiration for those who religiously participate in the weekly "In a Vase on Monday" meme. As an sporadic participant I must admit I've caught the bug, in other words even when I'm not posting I'm still creating. I've always preferred to bring stems and branches from pruning into the house, rather than just to toss them in the bin, and the idea of creating a weekly composition made from materials found in your garden is compelling. 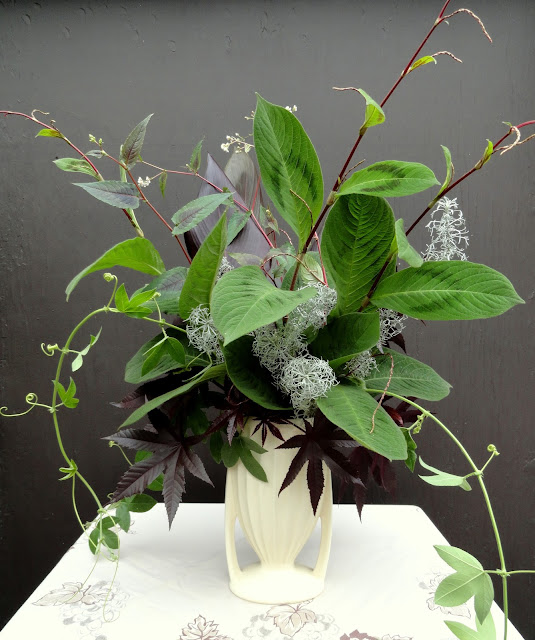 While other participants are still prominently featuring flowers in their vases, my vase this week reflects my garden - lots of foliage, and very few flowers. 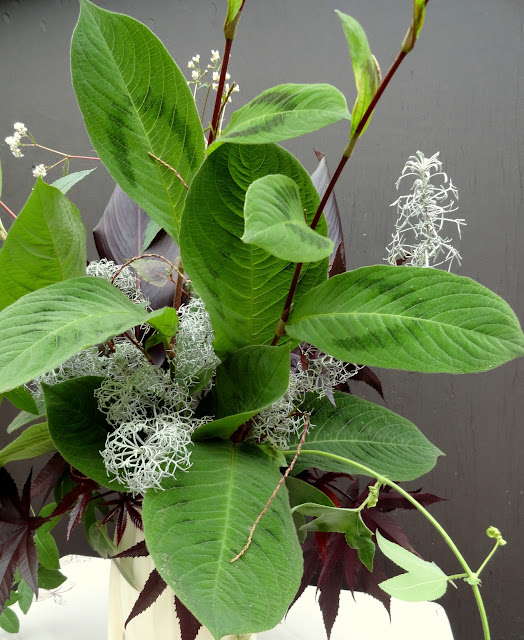 One of my Artemisia versicolor 'Seafoam' was getting quite leggy and a little ugly. A desire to see those rounded, curlicue tips up-close was the starting point for this week's arrangement. I wasn't sure how they'd hold up as a cut-stem but they're doing quite nicely. I do hope my pruning of the plant doesn't result in new growth that gets zapped by cold temperatures. 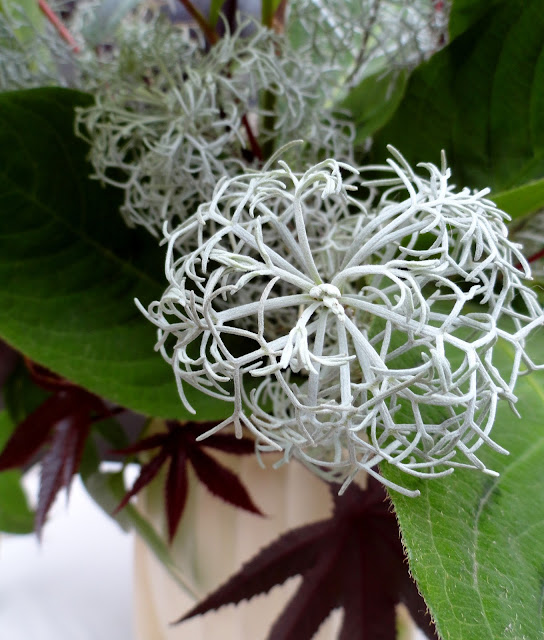 More foliage I wanted to see indoors: the glossy new growth on the Castor Bean (Ricinus communis) and the vines of Passiflora jamesonii 'Coral Seas'... 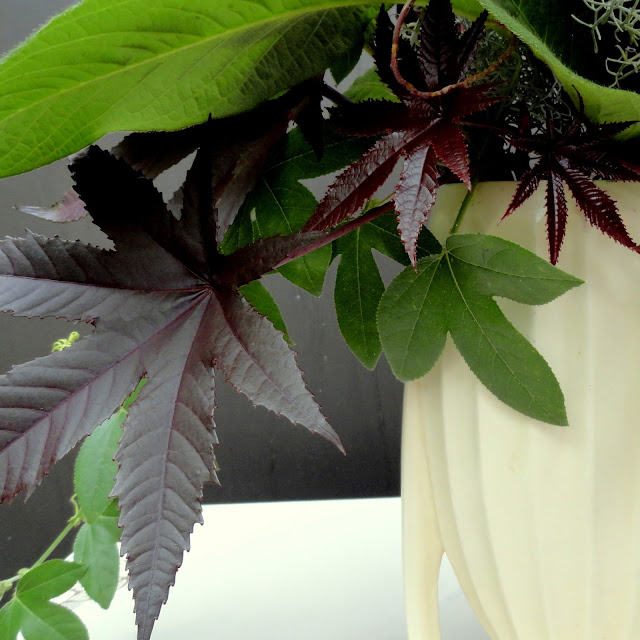 These tiny flowers belong to... 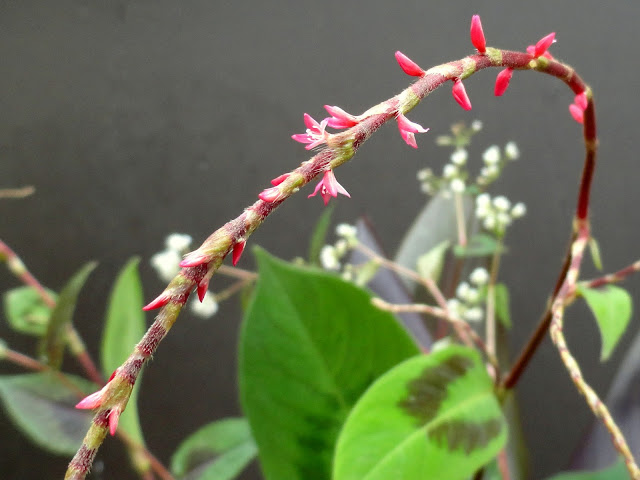 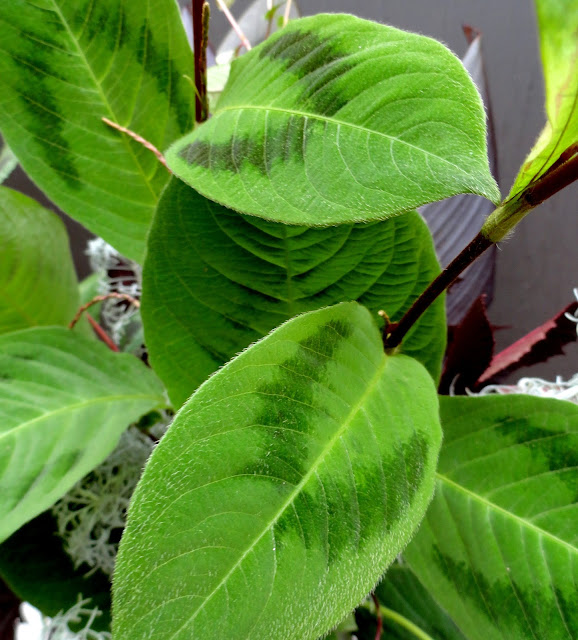 And the white flowers I've used previously, they're from Persicaria microcephala ‘Red Dragon’. The foliage is still red in some places but the really tall stems that are blooming have turned green. 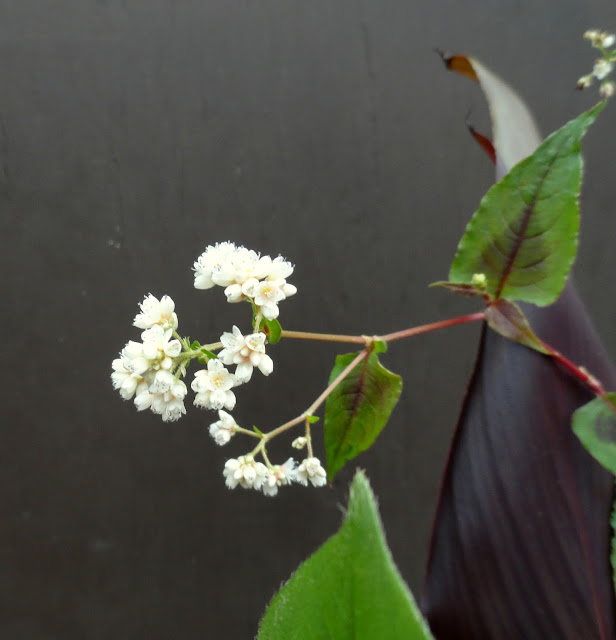 Peeking through in the back is one of three dark Canna leaves, they're left-overs from last week's creation (not shared here on the blog, but enjoyed just the same). 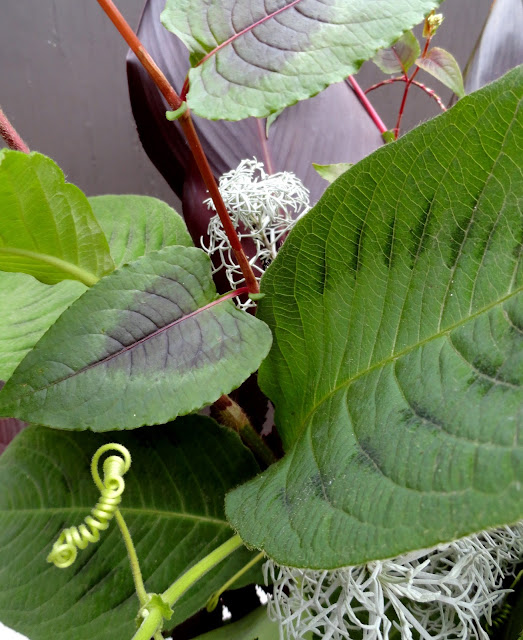 There are still a handful of flower buds on the Passifora plant, I'll be temped to cut the flowering stems should they near opening before the weather cools. That will add a little flower-power to a future vase... 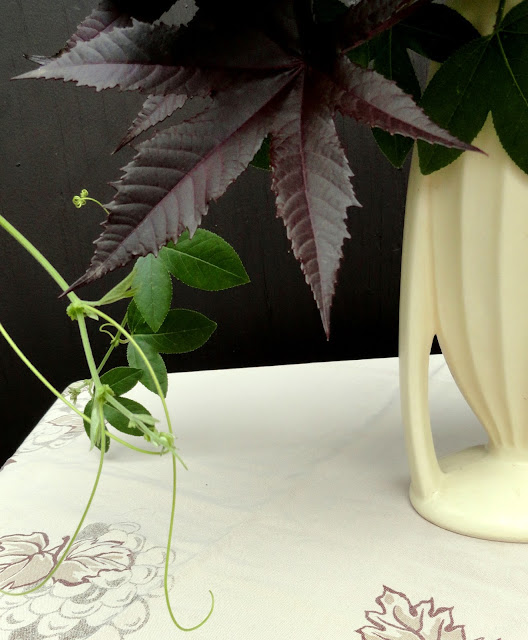 As always the hostess rounding up links for In a Vase on Monday is Cathy at Rambling in the Garden. Oh and for those of you wondering about the entries for the Ornamental Cabbage and Kale Challenge, one of our judges is out of town so the winner will not be announced for a couple of weeks. I will do a post sharing all the fabulous entries next Tuesday, November 10th (yay!) a big THANK YOU to everyone who sent in a photo! 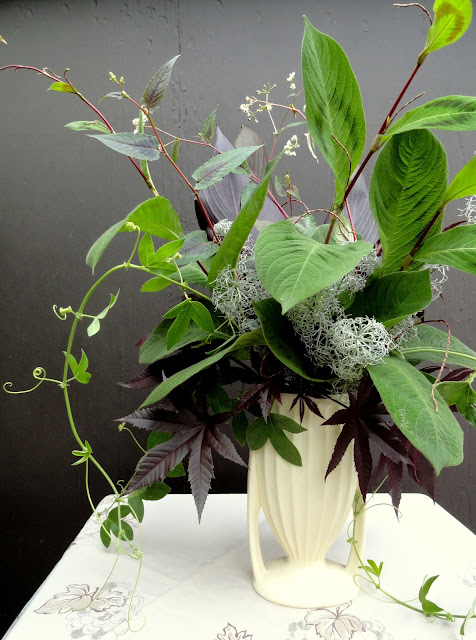