Aloes in Southern Africa was one of several gardening books I received from my husband on my birthday. The others included books on Euphorbia and a guide to Succulents of Southern Africa. That’s two books on Southern Africa…sounds like we might be planning a trip! (someday) 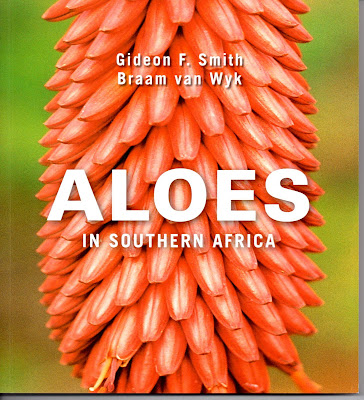 The book starts off with information about the Aloe-like plants of the New World, including Agave, Furcraea, Hesperaloe and Yucca. Contrasting each with the characteristics of the Aloe. The authors point out that Agaves are mostly stemless (unlike the Aloes which tend to develop stems over time) and are exclusively monocarpic (flowering only once before dying). In addition plantlets are often formed on the flowers of the Agave but this is a rare occurrence for the Aloes. This is my Agave bracteosa (or squid agave), the first time I saw one of these I thought it was an aloe. 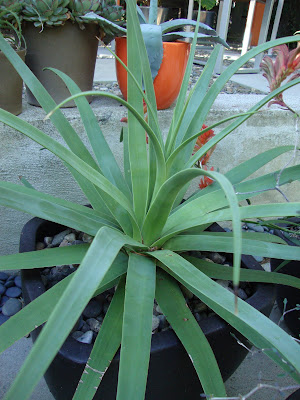 Reading on I was reminded that Furcraea are also monocarpic (pictured are my Furcraea gigantea variegata and Furcraea foetida ‘Mediopicta Sport')... 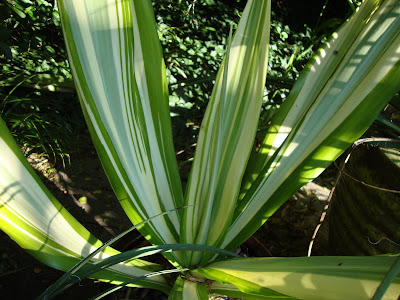 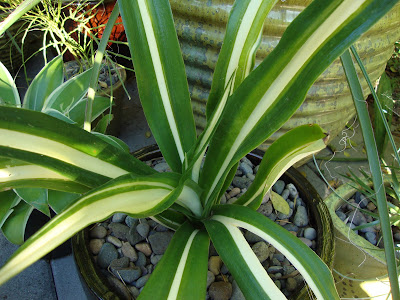 ...and learned that even though the flowers of the Hesperaloe (Red Yucca) are similar to those of the Aloe you can be sure you are looking at a Hesperaloe when you see the filaments curling around the edge of the leaves, since Aloes do not have this charactieristic. (my Hesperaloe parviflora pictured). 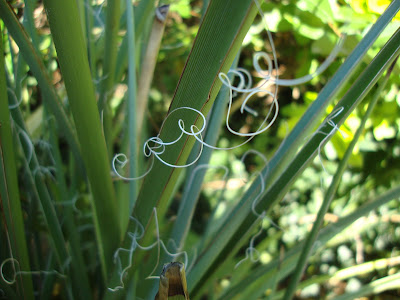 In the section devoted to Yucca there was a photograph that looked exactly like my Yucca a. purpurea (below), only it was labeled Yucca desmetiana and the caption noted that the leaves are leathery (like mine) rather than succulent and that this speicies of Yucca has never been seen in flower. 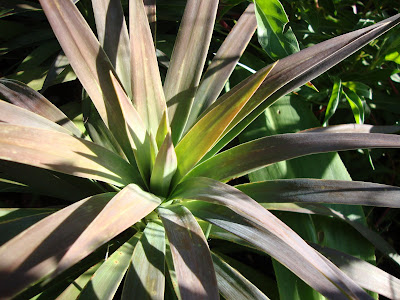 Since I have never been able to find much info on the name Yucca a. purpurea (as the plants I bought were labeled) I figured I had finally found the accurate name of this favored plant! Not so lucky, everything I find about the Y. desmetiana says it’s only hardy to 20 degrees. Several of mine weren’t planted last winter and still in their nursery containers when they froze solid at 13 degrees, yet once they thawed they were fine, obviously hardy beyond 20 degrees. The mystery continues. 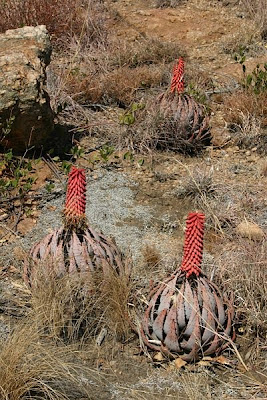 Thanks to the plant profiles pages of the book I was finally able to identify an Aloe I’ve loved but never seen for sale, or known what it is. Aloe peglerae (photos above and below borrowed from Wikipedia, and here is another picture on the Cactus Blog). 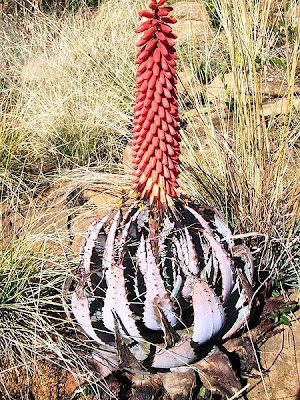 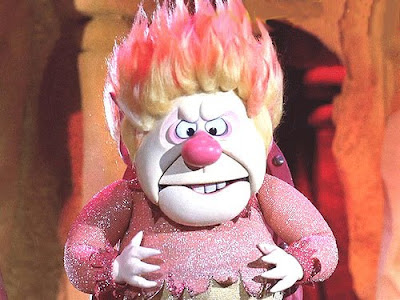 (if you don’t know who the Heat Miser is then you had a deprived childhood and you better start planning to watch The Year Without a Santa Claus this holiday season or at least go watch this video right now).

From the back of the book… "Aloes are the flagship plants of Africa, vividly defining the landscapes in which they occur. In garden settings these stately succulent plants capture the allure of the African savanna and serve as excellent focus plants…Aloes in Southern Africa explores the character and biology of African aloes, describing their habits, characteristic features and distribution in nature. It also details 58 aloe and related species across several vegetation zones. Aloe cultivation and propagation is discussed too, providing insight into optimum growing conditionings, gardening styles and plants that flourish in different regions. A feature on medicinal, cosmetic and culinary uses reveals the special properties of these intriguing plants. Whether you are starting a garden, redeveloping one or simply looking to expand your knowledge of these fascinating succulents, Aloes in Southern Africa will prove an invaluable guide.” It’s true; I really did learn a lot about Aloes reading this book. And since we’re on the subject I thought I’d share a few photos of my Aloe collection…

This is a no-name Aloe (purchased without a tag, if anyone has a guess I would love to hear it). Until recently it was red, I believe it’s turning green in a reaction to the lack of sunlight it receives as the angle of the sun has changed. 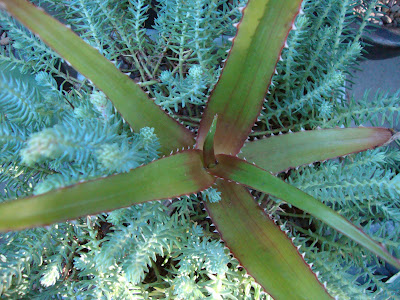 Aloe 'Fire Ranch' or Aloe vaotsanda x divaricata. This one should be hardy to 5 degrees, or zone 7. Perhaps I’ll be brave and let it stay outside in the “greenhouse” this winter. 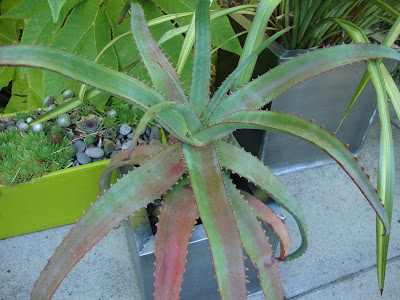 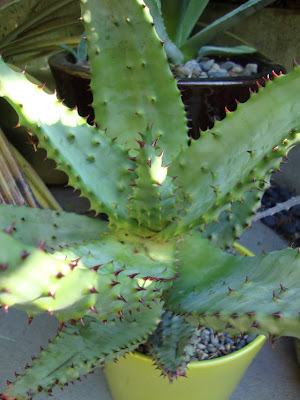 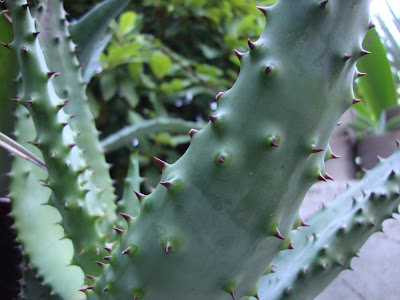 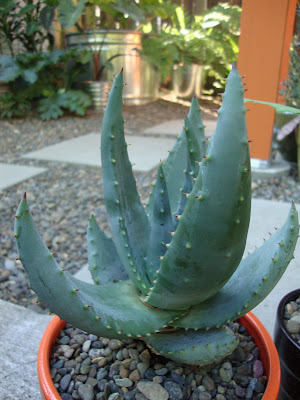 Aloe saponaria. This one is theoretically hardy to around 15 degrees. Since it is also so prolific (I’ve lost count of how many pups the mother plant has produced) I went ahead and planted a couple in the ground this spring. We’ll see how they do. The mama and these big babies will be spending the winter in the basement “greenhouse.” 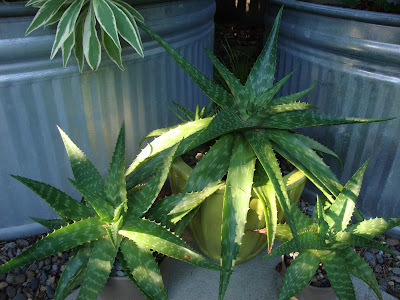 And finally Aloe striatula. I lost a small one of these last winter, but because I am eternally hopeful (or foolish) I replanted another small one in the same spot last spring. This big specimen will be protected, because you never know what Mother Nature has in store. Will the Heat Miser or his icy brother the Snow Miser be calling the weather shots in the Pacific Northwest this winter? 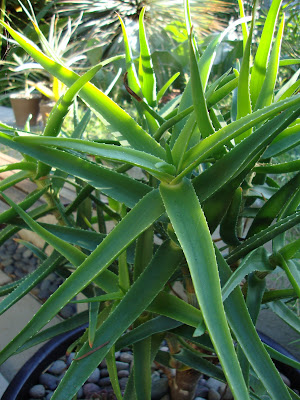