Last year I mentioned the fabulous birthday tradition my husband started when we moved to Portland, it involves a crazy (sometimes expensive) shopping trip to Cistus Nursery. Well as you are no doubt very aware I’ve kind of been on a plant shopping binge the last few weeks (months?). So we decided to break with tradition this year.

Now before you go thinking that means no birthday plants just calm down! There was still a birthday plant, an agave that had been on my mind for awhile, it just wasn’t at Cistus. 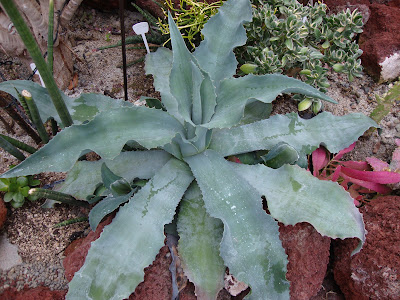 I’ve been infatuated with this huge agave in the indoor display garden at Portland Nursery on Division since I saw it on my first visit back in March. There were a few pups growing around the mama and I really wanted to offer to help them out by digging them up. If I had brought my gloves I just might have. 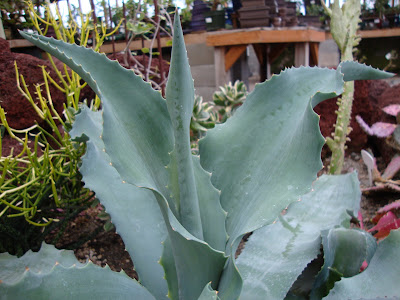 Fast forward to another visit in June and they had a smaller one for sale. But it was rather shop worn; a little dead around the edges (that's it below, I didn’t get a good shot of the dead leaves, but trust me on that). And it was not cheap at $45 so I left it behind. But I couldn’t get it off my mind! 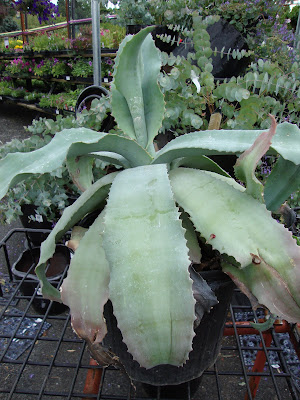 And that’s what the birthday tradition is all about…a big special plant purchase (like Sammy our Yucca Rostrata and Clifford the big lead Magnolia). So we talked about it and I went back. And I was again struck by how mangled it looked. So I swallowed my pride and I asked for a discount. Emphasizing how much I wanted to take this poor neglected agave home and care for it. And guess what! It worked. I got a 35% discount! 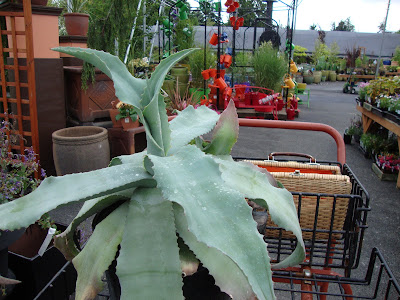 And then I went home and put on a long sleeve shirt and 2 pairs of gloves and went to work removing the dead and mangled leaves, at least eight of them. And potted up my new birthday agave. 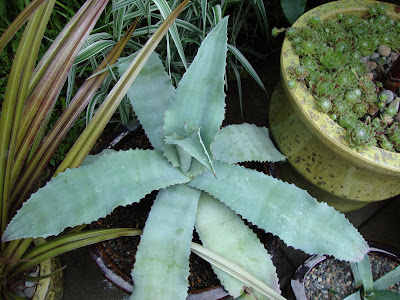 I had tentatively identified it as an Agave ‘Mr Ripples’ (there was no ID the one I bought or the one in the display garden, and none of the staff had a clue about it) but now I am not so sure. It looks a little too blue to be Mr Ripples. 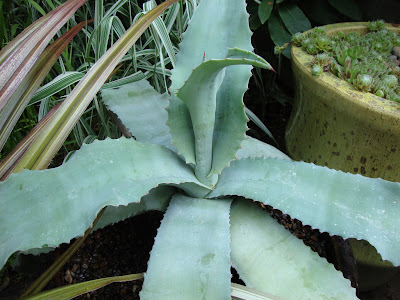 Anyone care to make a guess? It’s very wavy. Maybe that’s what I’ll call it! Mr. Wavy, the rescued agave.