The danger garden has experienced a recent windfall of fabulous bromeliads! The riches are almost embarrassing! (almost, after all you don’t see me saying no right?) 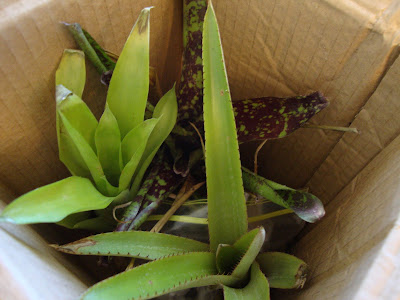 The Rainforest Garden (RFG), all the way across the country in Florida, held a contest on his blog a few weeks back and the danger garden won! Along with each beautiful plant I got a detailed description and tons of optimism about the success that they will experience here in my Portland, Oregon, garden.

Aechmea "blue cones"…this one is supposed to be hardy through zone 8, but RFG recommend protecting it until I have a clump. I will do just that. 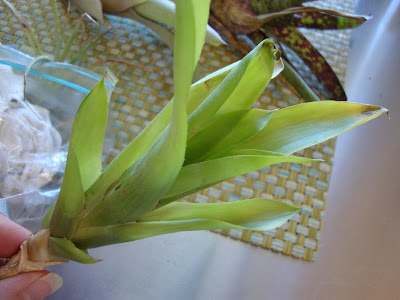 Quesnelia arvensis...according to RFG these are more terrestrial than epiphytic, so I should pot it up and prop it up until it roots. He says they get pretty big, and are also hardy through zone 8. 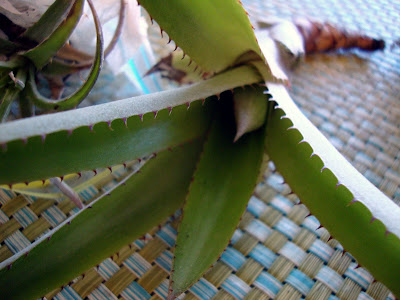 Neoregelia hybrid, presumably "blackie head" (WOW isn’t it amazing!) RFG says he protected his and had no damage, but he recommends it goes in a container here in Portland. Definitely! I don’t want to kill this beauty. RFG also says I could even try attaching it to a potted tree! (no soil required)…..uhm….this could be very cool! 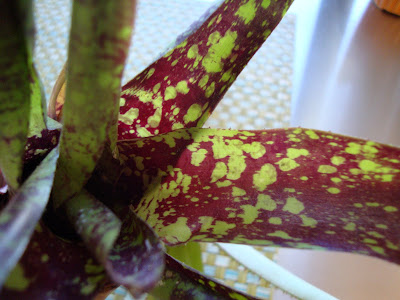 Dyckia frigida, (the name just sounds like it wants to be cold doesn’t it?) RFG says: “pot this one up in soil and grow in your garden, possibly protecting it until it gets bigger. It was my only one, so be sure to tell me how it does!”….wait a minute…he only had one and he sent it to the danger garden. Ok…there is no way I am letting this one die. 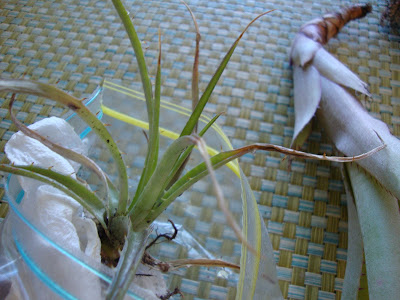 Since it’s been a crazy busy week and the temperatures have been in the mid to high 90’s I haven’t had a chance to plant them yet. They are being cared for and patiently waiting their new homes. Hopefully over the weekend I’ll get a chance. Thank you Rainforest Gardener! 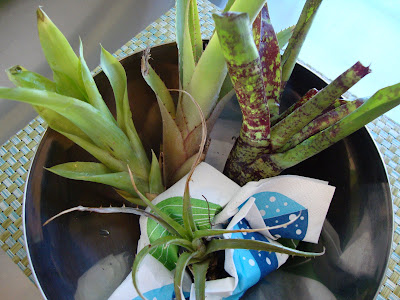 There is one more new bromeliad addition, a Tillandsia. I found this marvelous orange cage-like thing on sale *cheap* at Z Gallerie, it was supposed to be a candle holder but the glass insert was broken. I just knew I could figure out something to do with it. 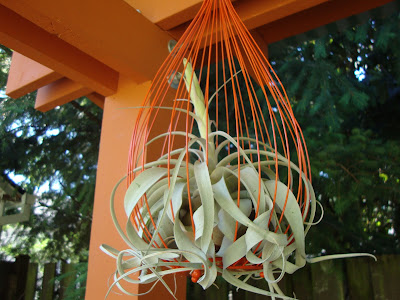 Then a week or so later I spied this huge beautiful Tillandsia, sold! I carefully worked it into the cage and hung it from the metal wires under our shade pavilion. 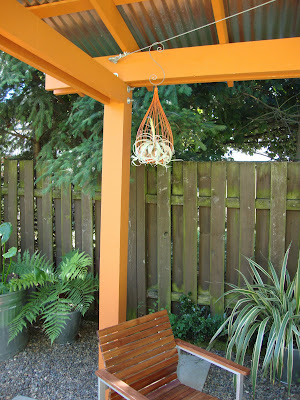 It’s going to be even more amazing when it blooms! 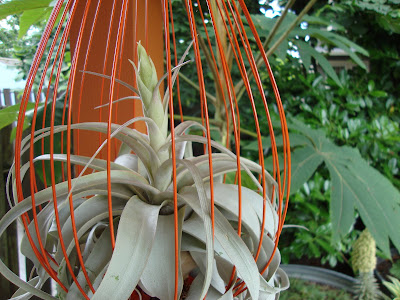