For the entire 4 years and 11 months that we’ve lived in this house I have hated the view as you walk into the back yard/garden. You see the peeling white/grey paint on the side of the neighbor’s garage and (for the 11.3 months that it isn’t in bloom) the wall of green that is the Rhododendron. It was finally time to do something about it. Here is the view the day I got started on the painting project. 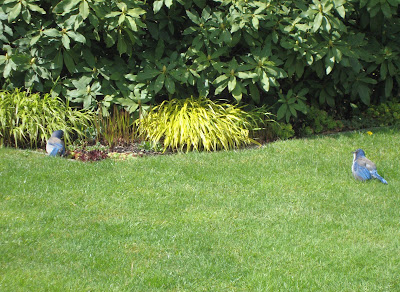 Oh … yes, that actually was the view. I came outside already to start scraping peeling paint and there was a pair of Scrub-jay’s in the yard. They couldn’t have cared less that I was there, just letting me go about my business while they went about theirs. Here is the view of the project, after I had spent a few hours scraping paint. 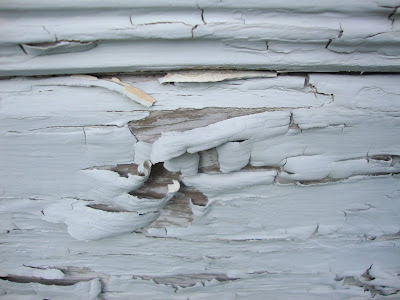 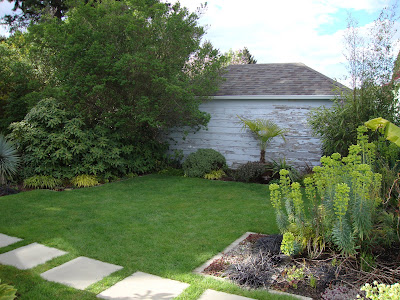 Day two of scraping and sanding below. Why is this picture important? Well if you look at the above picture vs. this one you’ll see the large blob on the left, a perfectly nice Hebe, is gone (where the black step stool is). I got brave and just tore it out. It was a nondescript mass of tiny leaves that sucked up light and did nothing for me. Gone! It felt so good to get rid of it. 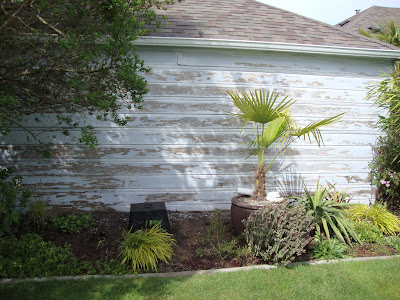 Finally after scraping, sanding and painting primer (and this isn’t even my garage!) I got to put the first coat of paint on. Color! But…here comes all the second guessing of my color choice. Did I choose the right one? So many factors went into choosing this color, too many to bore you with here… and now I hated it. Maybe it would get darker with the next coat? Oh and the Hebe in front of the Palm container…that’s the last time you’ll see it, it's gone too! It’s so liberating to get rid of plants that you don’t like anymore! 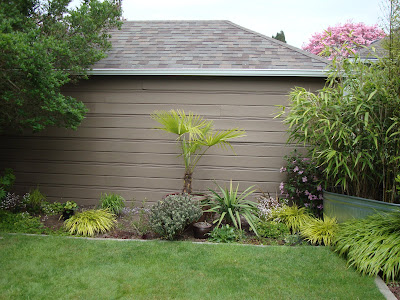 Painting project done (and I’m starting to warm up to the color) and it’s time to plant the palm in the ground! Poor thing had been in the container way longer than we planned. I thought we were going to have to break the pot to get it out but miraculously we didn’t! Lila is so proud of the effort that she needs to pose with the empty pot. 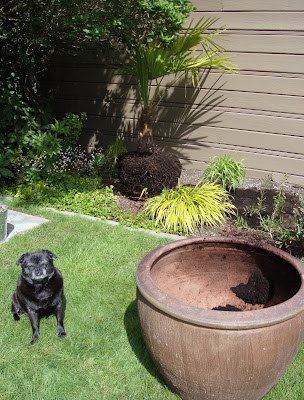 Look at those roots! This palm is going to be so happy to finally get in the ground. 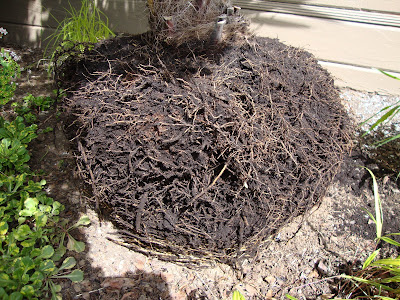 Done! Such a difference. And in case you are wondering about (or irritated by) that warped board to the right of the Palm…me too. But there is only so much you can do when it’s your neighbor’s garage, not yours. 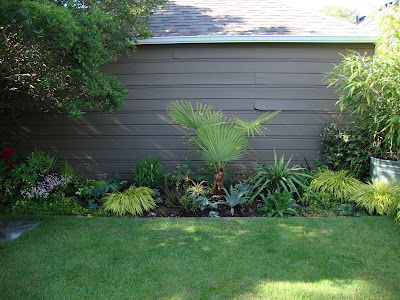 Since I planned on working this planting area after painting I had been accumulating new plants to fill it in, combined with a few I had dug out before painting. It was so nice to get them all in the ground. And be happy with the end result! And yes some would consider it ‘over-planted’ but that’s my style. 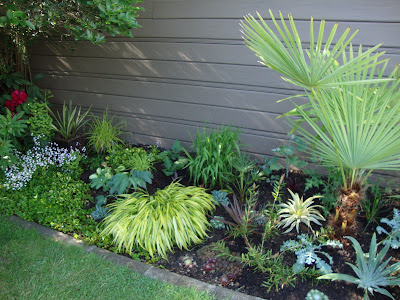 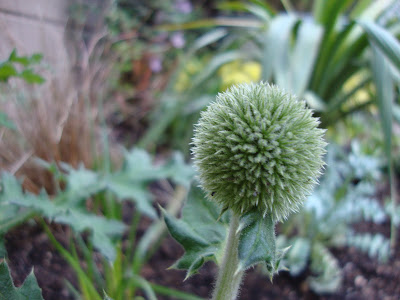 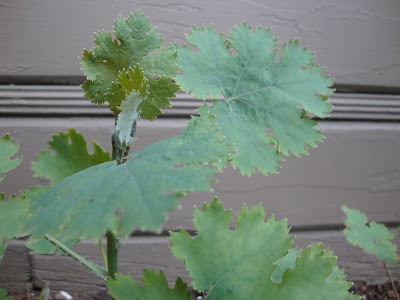 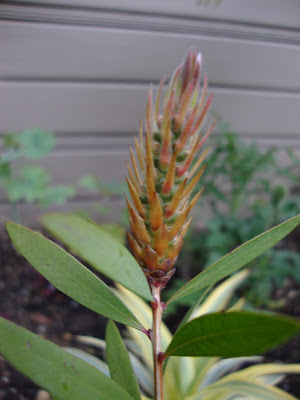 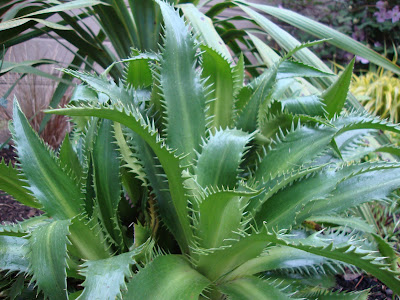 Close up of its wicked teeth 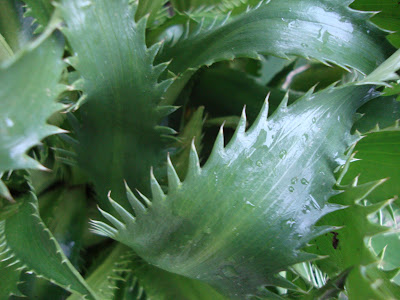 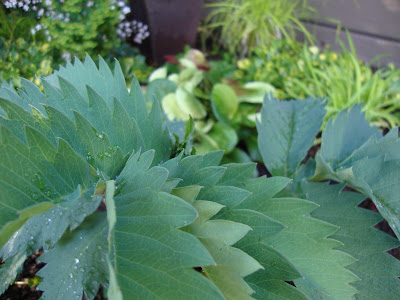 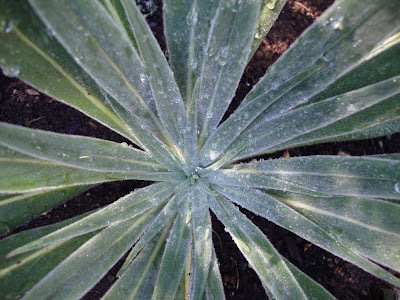 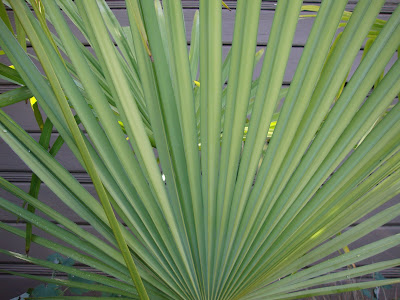 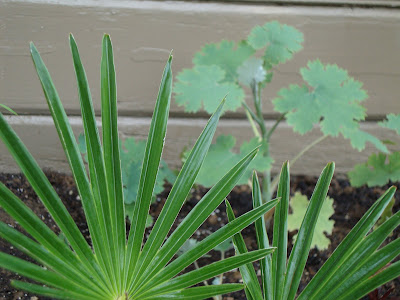 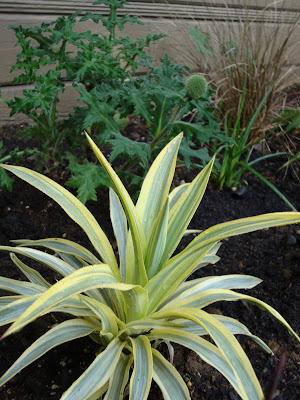 But there was still one more thing to do; I wanted to create a focal point as you enter the back garden. The wall of green from the Rhododendron and Privet needed to be broken up. Since this is the danger garden what better than an agave, right?
So my sweet husband, who thought he was finished placing the 89-lb slabs we built the patio and path from, agreed to place 3 more of them in the lawn. Giving me a place to set a trio of agave containers! Well, 2 agaves and an aloe. Here is the “after” shot… 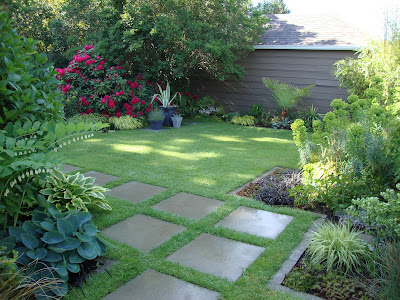 Nice that the Rhododendron cooperated and turned out in full bloom for the after shot huh? Project (almost) done, I’ve decided the silver square container (which is planted with a red/brown aloe) needs to be round, and colorful…to break up the metal squares. So a replacement is in order. Then the project will be done! Thorn gone and focal point created! 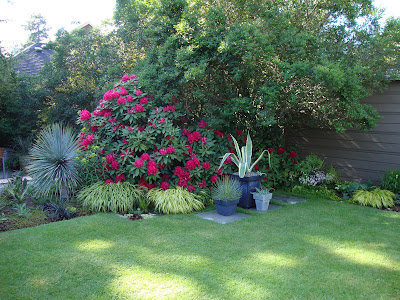