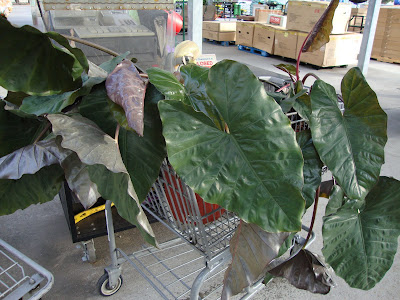 I spotted this leafy mess from a distance, thinking that they most certainly were fake. The leaves were too glossy and perfect, just couldn’t be real. But they are! Aren’t they beautiful? 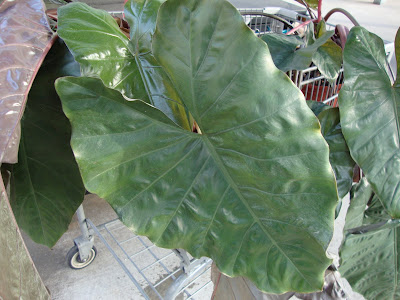 Tossed in the cart like they were, and parked in the corner of an emptying garden center, they look destined for an unhappy end. Unfortunately there was nobody around to ask about them. After some consideration I couldn’t think of where I would be able to put a big, floppy pair of plants anyway. 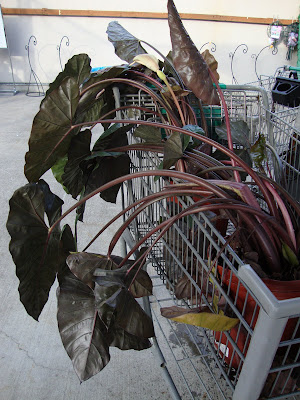 The tag identified them as Alocasia, for $19.99. This got me wondering about the difference between an Alocasia and a Colocasia, and I realized I had no idea. After a little internet research I found this tip: “There is one easy way to tell the difference between Alocasia and Colocasia. Alocasia has very thick leaves and the leaf tips always point up. Colocasia has very thin leaves and the leaf tips point down.” Ok the part about the thick and thin leaves definitely holds up, my Colocasia leaves are rather thin compared to these thick waxy leaves…the up/down part…not so sure. 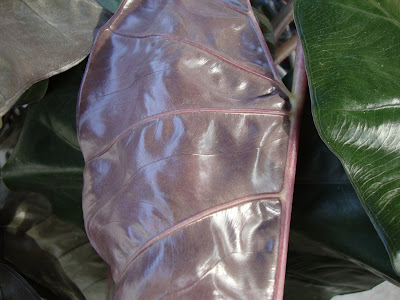 I also found this info: “the most important difference between the two is microscopic, found within the female flowers and generally (but not always) Colocasia has a partially peltate leaf blade, while Alocasia leaf blades can be any shape imaginable from entirely peltate to sagittate, to deeply pinnatifid”. Ok now I have to go research what the difference between peltate, sagittate, and pinnatifid is…