Agave love in the Pacific Northwest 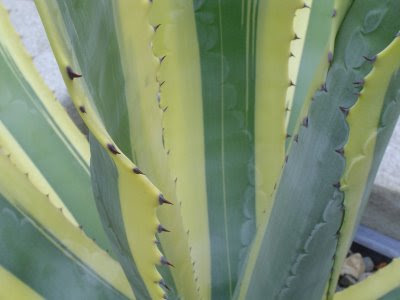 Those of you who have visited ‘danger garden’ with any regularity know that agaves are a favorite topic. I originally planned a post about a few agave winter-hardiness experiments I was conducting. However after the comments on last weeks post about needing greenhouse space for the winter I decided to expand it to include information about all of my agaves in the ground, and those that will be spending the winter outdoors, in a pot. I can get rather wordy, and this being a subject I am very passionate about I couldn’t help but to ramble on and on and on. Consider yourself warned: this is not a brief post and if you don’t love agaves you will probably be bored to tears. Even if you love agaves I am pushing the limits of your patience…
The experiments: last January, when plant shopping was on winter hold, a High Country Gardens catalogue arrived in the mail. Lusting after their agave collection I decided to purchase a few of the cold-hardy selections and see if they would make it through our cool wet winters. I figured at the bargain prices of $6.99-$7.49 they would be small and if I planted them out early enough in the spring they would have 8-9 months to get established before the winter arrived. My choices were:

Agave parryi – Parry’s Century Plant, Flagstaff form, hardy in Zones 4-10, (on the right in the picture below). I am a little worried that I might need to move this one. Its flattened appearance seems to be saying “Sun…I need more sun!” poor guy. The acanthus ended up shading him more than I thought it would. 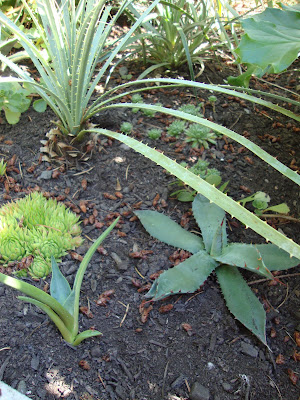 The small slightly deformed one on the left (above) is a pup from an Agave ‘Burnt Burgundy.’ Since it was a freebee, coming along in the pot with its mom; it went into the ground as an experiment. This will be its first winter in the ground; it should be hardy to just under 20 degrees, I am willing to loose this one, but hopefully that won’t be the case.

Agave havardiana – Harvard’s Century Plant, hardy in Zones 5-10. My finger tips included for scale, the other two from High County Gardens are the same size. 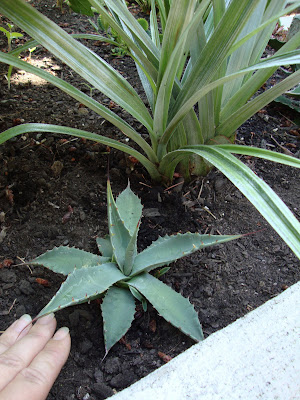 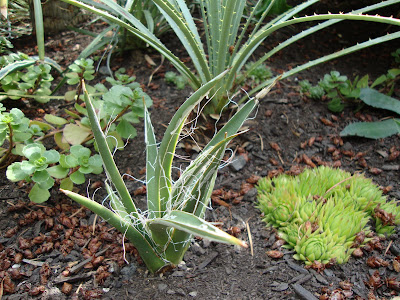 These are all planted in the ground, next to the retaining wall around our “sunken” patio. This location seems ideal because it receives little summer water (unless I purposely water them) and the soil is back-filled over a layer of crumbled cement block at the base of the wall, providing excellent drainage. I also suspect that during the winter months the sun on the concrete wall may warm the soil behind it a bit, but I have no actual proof of that. Just a theory. The soil in most of my garden is slow draining rocky clay, thus site selection and the ability to provide excellent drainage is key when planting an agave in the ground.

Those of you that live in more agave friendly climates are probably looking at these pictures and thinking…silly girl, those are going to get huge and she has planted them too close together and too close to the wall. I realize that I may have to move at least one of them some day, I will consider myself lucky when, and if, I have that problem.

This is my largest and most successful agave planted in the ground; Agave montana 'Baccarat' a beauty isn’t she? 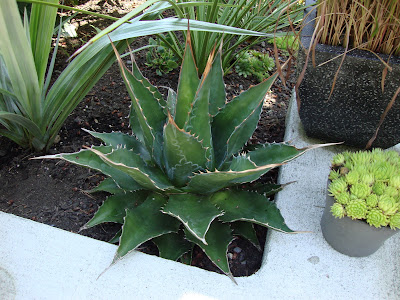 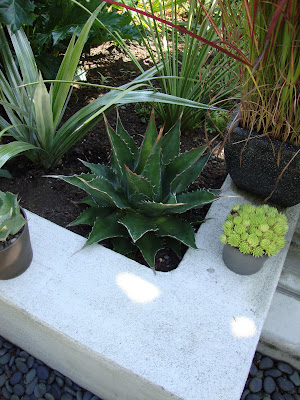 If you click on the link (in the name above) you may notice that the description includes these words: “slow to moderate growing agave forms solitary artichoke like rosettes that can grow to 6 feet wide.” Obviously I was concentrating on the “slow” part of that sentence rather than the “6 ft wide” part when I planted this one. I chose the placement based on getting it the very best drainage possible, I was quite skeptical that it would make it through the winter, but it did, and last winter was a real test! The only protection it received was a sheet of bubble wrap placed over it with burlap on top of that, the burlap to keep the sun from damaging the leaves through the magnifying glass-like bubble wrap. This protection was only in place during our arctic event where the temperatures were below freezing day and night for over a week (or was it two? I have tried to forget that horror).

Agave Gentryi ‘Jaws’ is a new addition to this same well draining area, I saw him and fell in love; he went in the ground last spring. 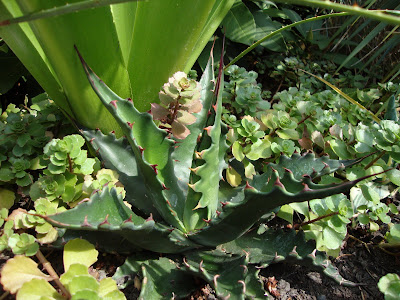 According to the San Marcos Growers website this is one of the most cold tolerant of the large agave, tolerating temperatures down to 5° F. There is that size issue again…they say this one will grow 4-6 ft wide, and possibly up to 8 ft wide. I am doubtful these plants will reach their full potential size in our Portland climate. I may be wrong, and again, I welcome that! 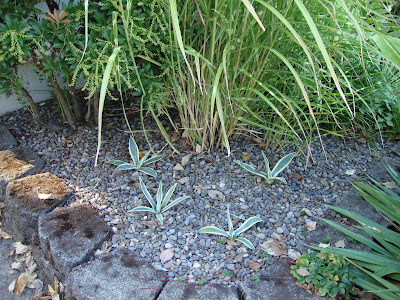 One of these pups spent last two winters in the ground (upper left hand side) it was tiny, about 1 and a half leaves, when I planted it. It has received the same protection as described above for the A. montana.

A second pup (upper right hand side) spent last winter in a terra cotta pot with no additional projection other than going inside our unheated garage during the previously mentioned “arctic event.” I was basically sacrificing it to the winter gods, it went into the season looking pretty rough and I wanted to see if it would make it outdoors in a pot. It had sustained damage from the newspaper delivery person (three broken off leaves…I shouldn’t have had it on the front porch) and if it died I wouldn’t have been upset. But...it lived! Its reward was a place in the ground. As you might be able to see it still has a bit of decay on one of its leaves. 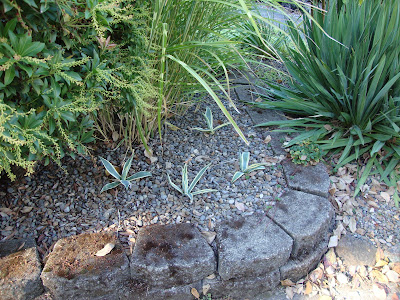 I chose this location for a pup grouping because it is highly visible, right next to our driveway, and it is a raised bed that should have good drainage. That part is a little hard to see in the picture but there are two retaining wall blocks that build up a little height. Personally I don’t care for the blocks but we inherited them and until we tackle the long list of other home improvement projects we are stuck with them. This area gets direct morning/early afternoon sun in the summer and morning into the late afternoon sun in the winter, when the neighbor’s tree has lost its leaves.

Next up the big daddy of all my agaves (yes, I do call him Mr. Big), also an Agave Americana ‘variegata.’ 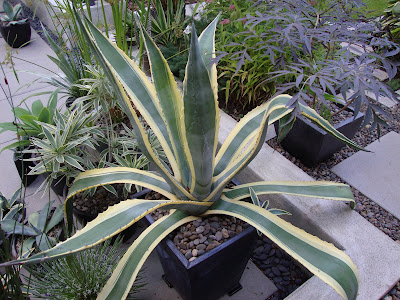 This huge (4 ft "wing-span") specimen has spent the last 2 winters outdoors in this pot. He is planted in a mixture of soil and chicken grit (to improve drainage, I try to do this with all my potted agaves). During the winters I was religious about rolling him in and out of the garage based on the weather forecast, making sure he stayed fairly dry over the winter months. Yes I was a little overprotective, but I couldn’t bear the thought of watching him turn to mush. He had no winter protection other than the unheated garage on really rainy days and during cold snaps. This year will be different and he’ll be spending the wet winter under our shade pavilion. We will be constructing plastic walls to help keep him (and a few other plants) dry and hopefully a little warmer than in the outside air.

This pup might be this year’s sacrifice to the winter gods; I planted him adjacent to my small lawn, so he receives summer irrigation and is one of the least free draining of all my in-ground agaves. 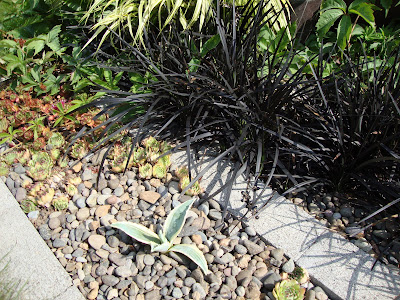 He is setting in and on a gravel/soil mixture; I hope this will give him a fighting chance. There are a couple more pups like him tucked in other places with similar circumstances (minus the gravel); since I experienced a windfall of these little agaves from my brother I’m testing their hardiness in a few spots that are not ideal conditions.

The only other agave that I’m sure will be spending the winter outside is this Agave parryi (my toes included for scale). 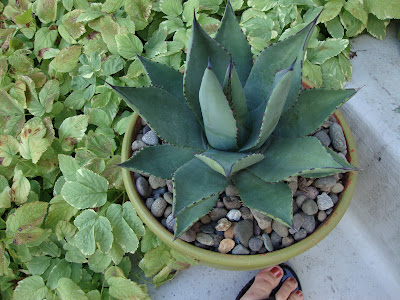 I had every intention of putting this one in the ground but just haven’t found the right place. Since he should be hardy to below freezing I’m hopeful he’ll be fine. He may get to live in the shade pavilion “greenhouse” or maybe I’ll just see if he can tough it out with no protection at all.

I do have mixed emotions on the topic of agaves in well draining pots spending the winter outside. I am willing to risk it if I know that the particular agave is hardy to around 10 degrees cooler than the predicted temperature. My theory has always been that hardiness ratings are for plants in the ground, and plants that are in pots have less insulation protecting their roots than those in the ground do (at 30 degrees the roots of an agave planted in the ground are going to be warmer than an agave planted in a pot, right?). I don’t have any scientific evidence to support my 10 degree theory; this is just me making it up as I go long. It’s this unknown level of “pot-hardiness,” and concerns about drainage, that keep me from leaving more potted agaves outside during our cool wet winter. Those agaves that don’t meet my 10-degree rule go inside for the winter, we are lucky to have a large basement with room for a couple of grow lights. I haven’t lost one yet doing it this way and it beats having to watch the weather forecast and play the in and out game all winter! The downside is that I have to be extremely careful when I bring them out in the spring so they don’t get sunburn. Seriously!

I should mention that I have lost a couple of agaves in the past. The first one was a gift that my then boyfriend (now husband) brought back from his parents house in New Mexico, hardy to the low 30’s at least. I left it outside our first winter in Portland, in a pot that didn’t drain well. I intended to bring it in as soon as the rains started but I wasn’t fast enough. So sad watching it rot. The second was an A. Americana ‘Aureovariegata’ that I purchased at Cistus on our first trip there, it should have been hardy to the mid 20’s and I thought I selected a place with good drainage. Not good enough evidently because by spring it was a pile of mush, never to return.

So how many of you are still reading? Like I said, I can get wordy, and I am an agave geek. Hopefully there was a nugget of information in there that at least a couple of you found interesting. I’ll update the status of all of these agaves if there are changes and then do a complete wrap-up when the rains let up in the spring and it looks like we are headed into warmer and dryer agave-friendly weather. Thanks for indulging me in my agave passion!