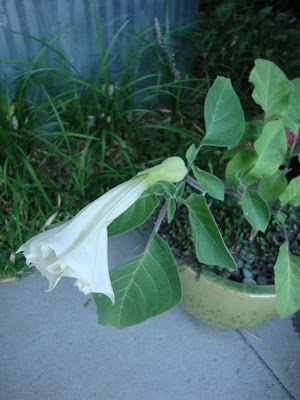 Late last summer I bought a second Datura to plant in a bare spot created by my Acanthus fading from the August sun and heat. I knew the Datura would die in the approaching winter months but didn’t care. It was on sale ridiculously cheap and was just the sort of perky plant with a few blooms that would chase away the August blues.

Eventually the flowers faded and the seed pods appeared. Since I don’t have a photo of those seed pods I stopped by the amazing Datura I found a few weeks ago, luckily it had a few pods. Aren’t they fabulous!? 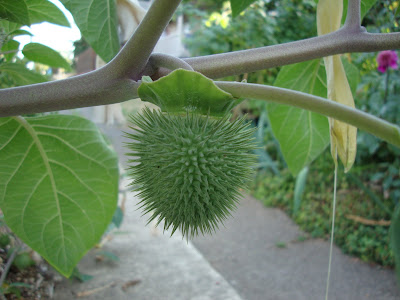 Since we were without a dog at the time (the seeds are poisonous) I let the pods brake open and drop their contents on the ground, hoping that spring would bring multiple Datura seedlings. Naturally nothing happened. Even in a normal winter I believe our climate is too cold for this plant, or its seeds, to winter over. With last winters extremes those little seeds didn’t stand a chance.

The fading Acanthus happened again this year. The temperature was record-setting high for over a week and the foliage wilted, turned yellow, and the plant went from size XL to XS, keeping just the new growth and the bloom spikes. I’ve read that it’s normal in hotter climates for Acanthus to go completely dormant in high summer. Well, it looks like those Datura seeds were lying there, shaded by the Acanthus leaves, waiting for the leaves to die so the hot sun could bake them to life. I now have 4 of what I think are Datura seedlings coming up. I've circled them in orange below... 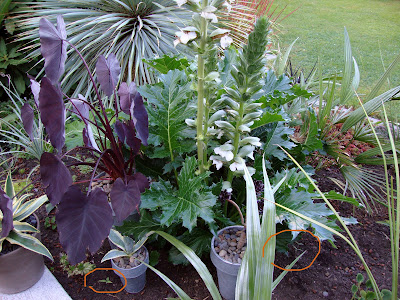 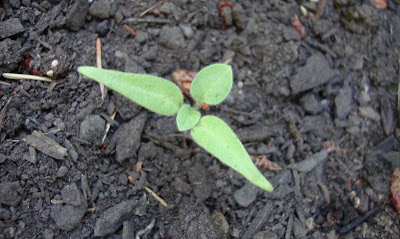 It’s too late in the season for them to amount to anything this year, but I wonder if I can gently tease them from the ground and over-winter them inside? Then come spring they will be big and strong and ready to be planted in the ground. What do you think?

(BTW the photo at top is the only bloom on this year's Datura, it lasted days but I only got around to photographing it as is was vanishing, still beautiful! And I will definitely be back to gather seeds from that sidewalk Datura)