After ten years together we've had to say goodbye to our little girl, my gardening side-kick, and the dog behind the danger garden... 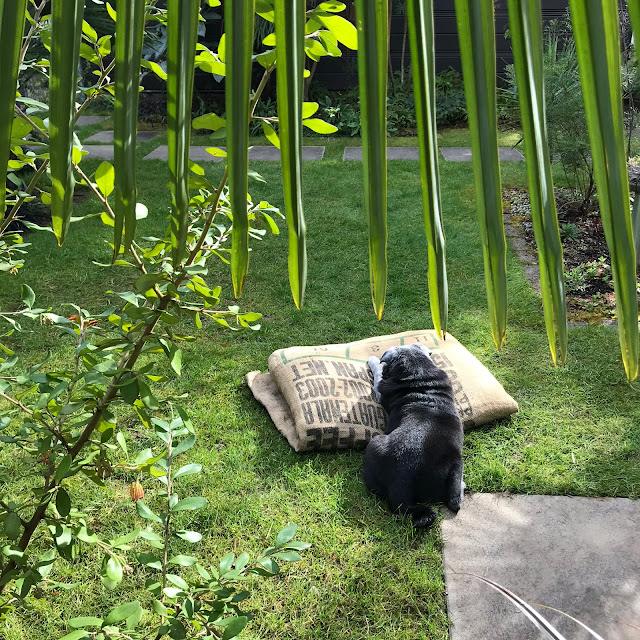 Lila came to live with us at the end of October, 2008. She was only 7 then, yet the adoption paperwork already listed her as a senior dog. 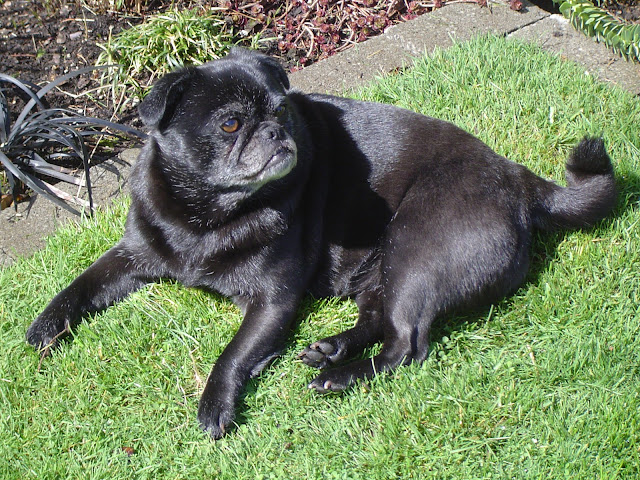 We knew she’d had a rough go of it, a divorce in her family led to her being abandoned in the backyard. Prior to that they’d been breeding her and selling her pups, reports were she’d had three litters and lost one entire group to sickness. 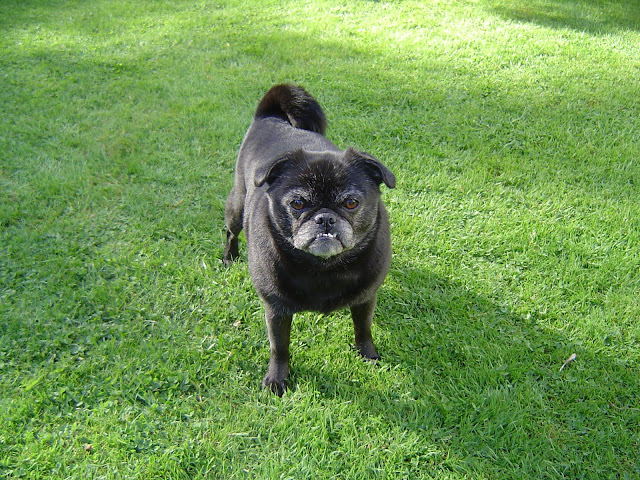 Before we found her, the folks at Pacific Pug Rescue had been caring for her, and she’d bonded strongly with the lady who’d been fostering her. The night we became a new family the foster mom left, our front door shut, and here we were. Lila looked around the house, looked at us, and then threw herself at the front door, clawing to open it and began howling in the most painful way. We’d been rejected before we even began to love her. 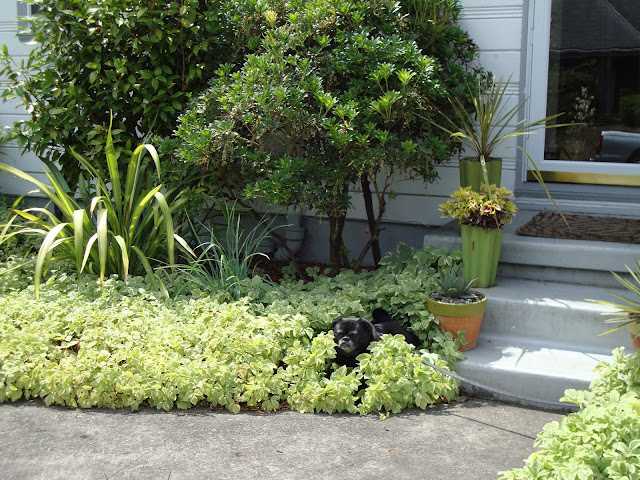 Those first few weeks were rough, for me especially. Andrew wanted a dog, I did not. I’d always been a cat person. Dogs were too needy, too in your face. I remember showing a co-worker a photo of our new adoptee and her response was “don’t you just love her?” I replied no. No, I did not. I was learning to, but I wasn’t there yet. I felt like a furry alien had invaded my space. Yes, I had a long way to go, but thankfully Lila was patient. 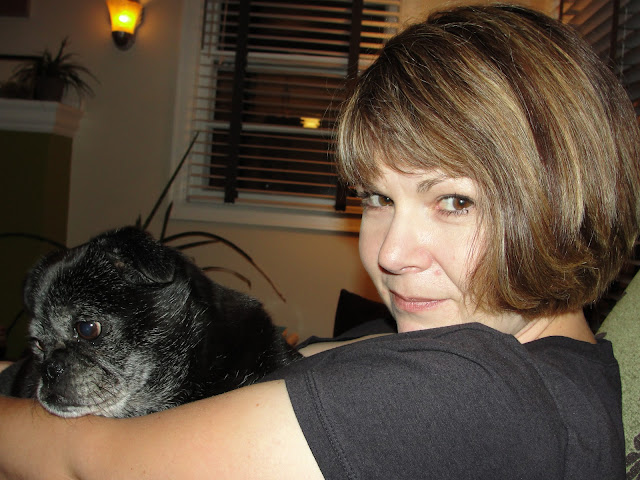 If you heard my interview on Cultivating Place you know Lila and I eventually bonded during a bad winter storm. She saw me crying over plant catastrophes and made herself into a furry snow-clown, making me laugh despite my tears. How sweet was that? 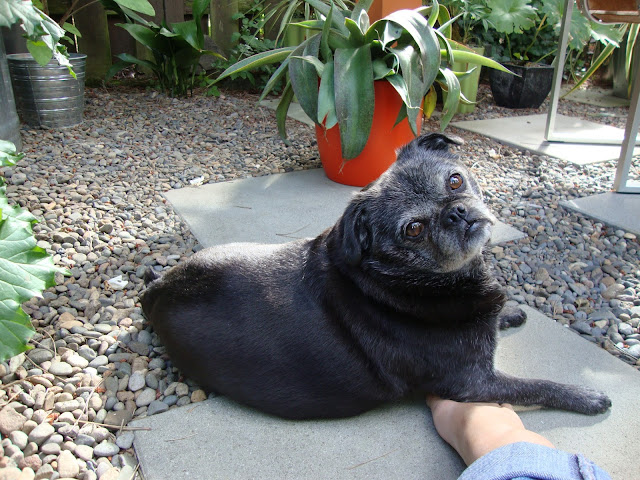 Our bond deepened in December of 2009 when I broke my ankle. I was home-bound for 8 weeks and forced to use crutches to move around the house. Nurse Lila reported for duty and did not leave my side unless Andrew drug her out for a potty break. Of course, navigating a small house on crutches with a dog underfoot was difficult, but her love and attentiveness during that time was remarkable. 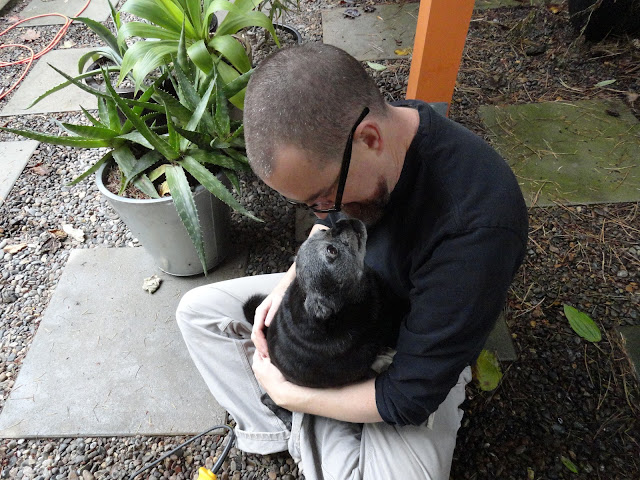 One April night in 2015 Andrew and I woke to a horrific sound. Lila’s paws were hitting the hardwood floor in a rhythmic pattern that was unnatural. She was having a seizure. She was stiff-as-a-bone when Andrew picked her up from her bed on the floor and put her on our bed. Somehow, I had the wherewithal to call Dove Lewis, our local 24-hr emergency pet hospital. I described what was happening (it was still happening) and they confirmed she was having a seizure. “She can still hear you, don’t say anything to alarm her, bring her in” …finally — after what felt like forever — the rhythmic movements stopped and her eyes again had life to them. We took turns holding her while the other dressed and were out the door to the hospital. She hadn’t moved her legs at all once she’d stopped seizing and I feared she wasn’t ever going to move them again, I feared this was the end. 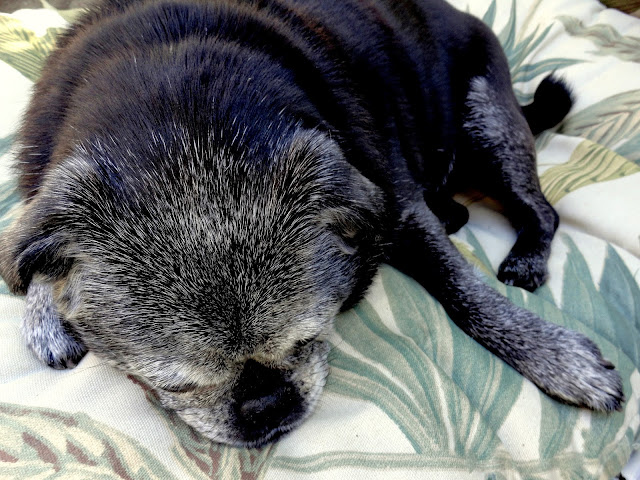 On our way to the hospital I made peace with the fact we’d invited her into our lives and had a good run of 7 years, I was sad but thankful we had been able to care for this spunky little dog. And as odd it sounds, I started to mentally write how I would I let the world know she was gone. Writing is how I process. By putting the words together in my head, I was attempting to come to terms with the loss. 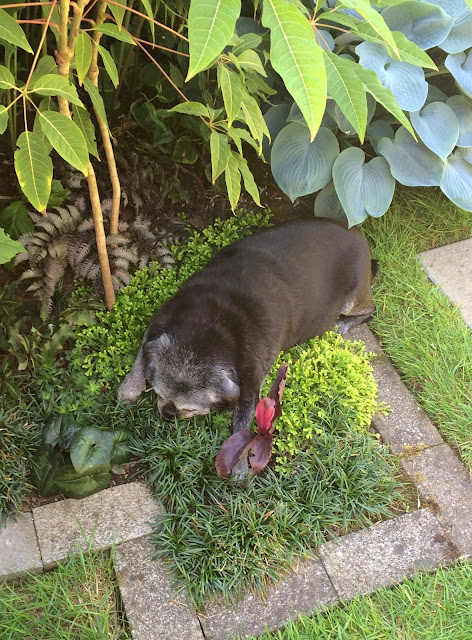 As Andrew pulled into the parking lot she stared to move her legs, by the time I stepped out of the car she was able to stand on her own. Hours later we learned there was no residual damage, but dogs who have a seizure later in life, with no earlier episodes, are thought to have a brain tumor. "Did we want to have a scan done?" For what purpose? Brain surgery? On a 14-year-old dog? No. She was so old the Vet didn’t even want to put her under to clean her teeth. Instead we embarked upon a regimen of anti-seizure medication every 8 hours. Every 8 hours. A pill at 5:30 am, 1:30 pm and 9:30 pm. Every single day. Talk about life altering. But we kept that up and she never had another seizure. Was the medicine really necessary? We’ll never know, but memory of that night’s horror was enough to motivate us. 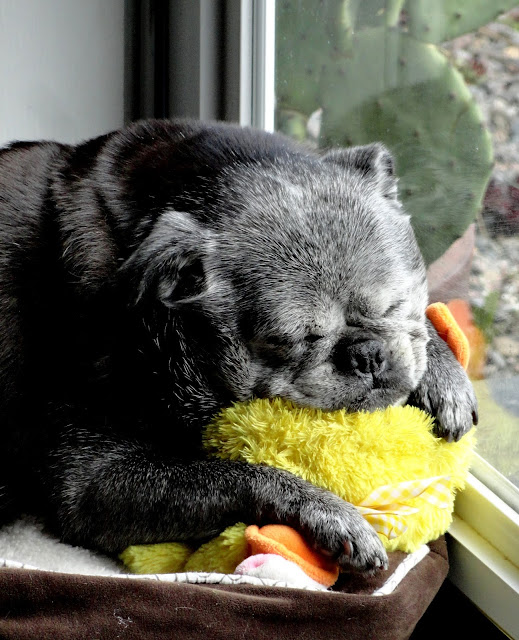 The last three years have had a lot of ups and downs (including another night-time trip to Dove Lewis last July, where once again we thought we might be coming home without her), but for the most part she’s been a healthy, active, treasured, member of our family. 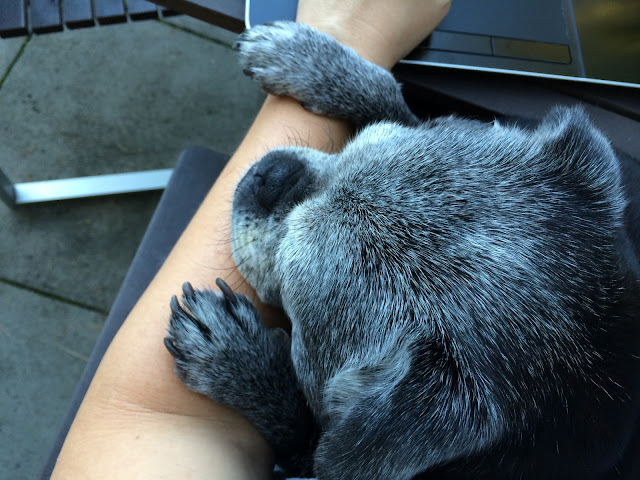 She lost her hearing a couple years ago. Opening drawers and cupboards no longer meant a dog running to the kitchen. You could say words like food, and treat, without her jumping to attention. I would get weepy at the memory of her adorable pug head hilt and the fact she didn’t do it any longer. People talk about the human/dog bond as being one of unconditional love, but we’ve always known she’s in it for the food. If meals didn’t show up regularly she would have let us know we were on thin-ice. Luckily that never happened. 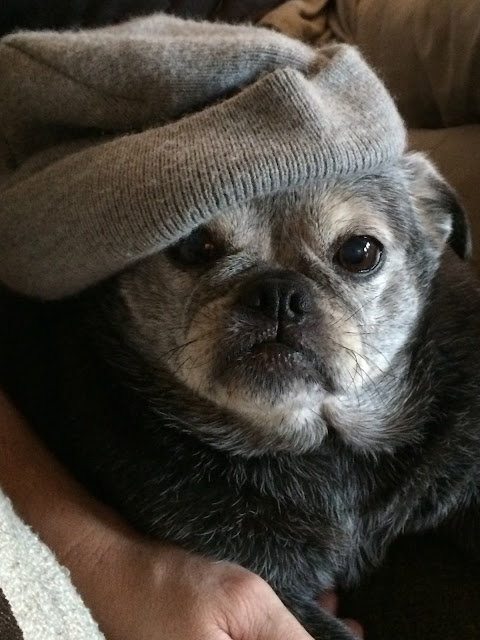 The last seven or so weeks have been tough. Her decline has been quick. While we’d still get sparks of the old Lila, it was obvious she was suffering, too many maladies to list, plus doggie-dementia. Many people said “you’ll know when the time comes” … others offered “you’ll never know, but you’ll have to make the choice.” I’d say both are correct, and both are wrong. We’d mentally settle on a date, only to have a particularly bad day cause us to rethink it and want to end her suffering sooner. Then she’d rally and I’d think how could we have ever thought it was time? Well it is time. 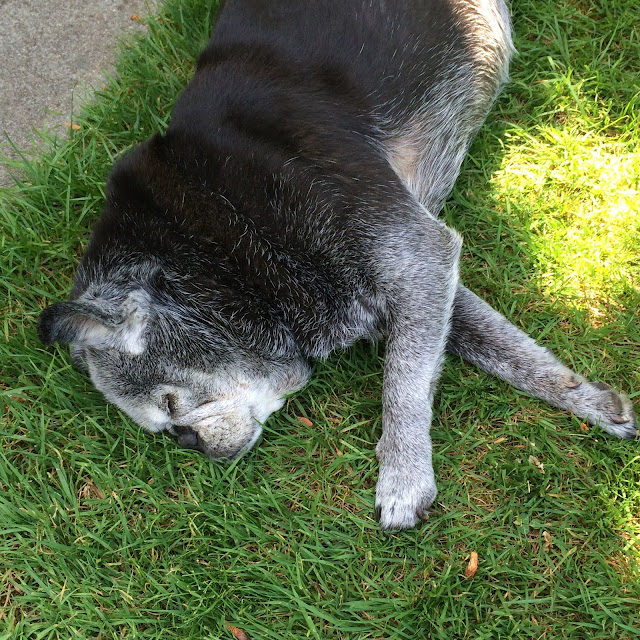 Even though we lived here, and I gardened here, for 3 years before she joined us, this house and this garden are hers. It will feel so empty without her. So incredibly empty. 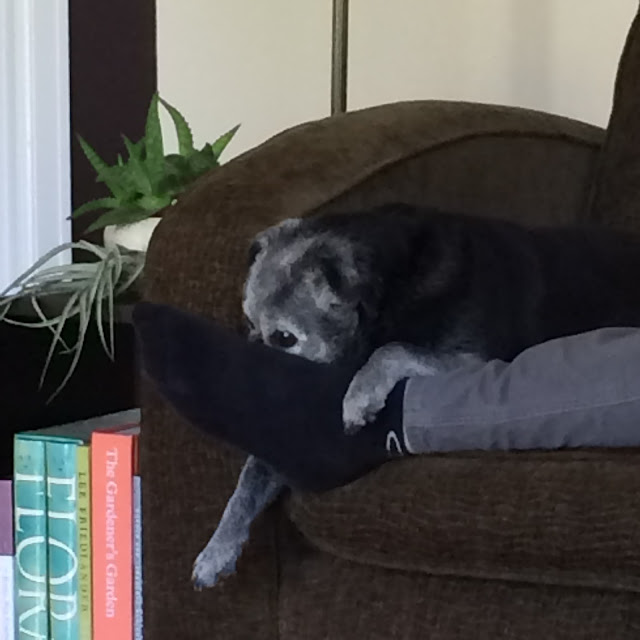 Blogging has taught me many things, one of which is that I will get through this. Us gardeners are animal lovers too. I’ve read as so many of my fellow bloggers have suffered this same loss, I’ve been amazed and inspired by their strength. 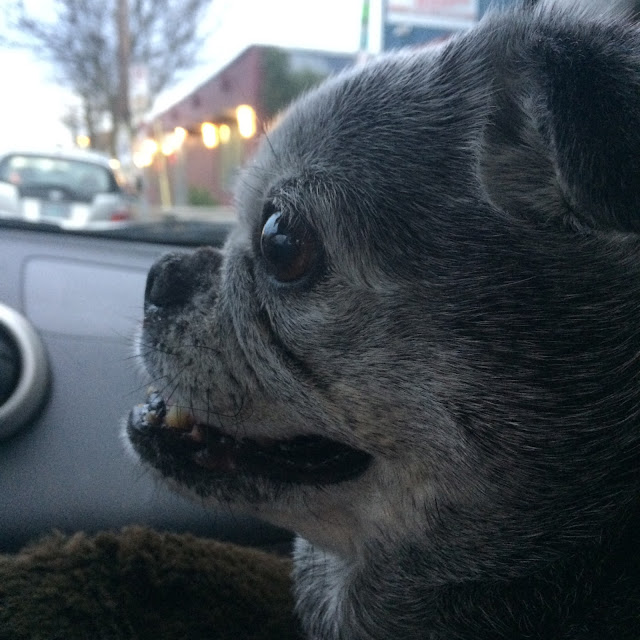 I will be taking a blogging break. I need to mourn without feeling pressure to write about a garden without her. I need to be with Andrew and my friends and be distracted from this loss. I will return. It may be a few days, a week, I'm not sure, but I will be back. 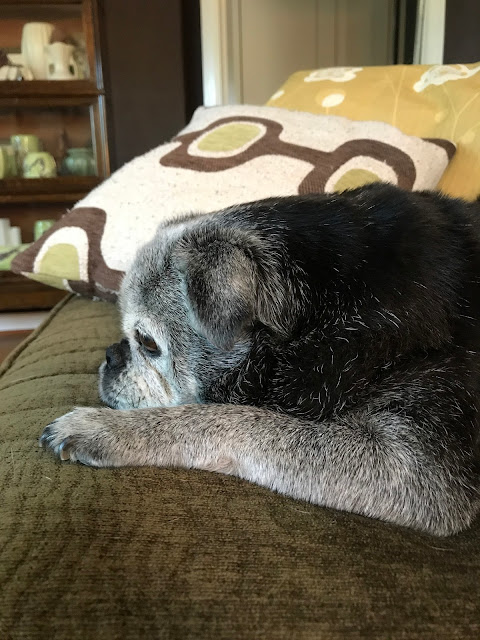 Most of all I will miss…
Her snores. The way she would use her paw to tap my foot when she was excited about something (usually food). How she could tell time and would let me know when I should start wrapping up a day of gardening so I could get (her) dinner ready. Her smell. How happy she was to be in the garden. How she would headbutt your legs and rub her eyes and nose against you so hard you felt like you might fall over. Her sleeping on my gardening clothes when I’d get in the shower and leave them on the floor. The way she smacked exaggeratedly when eating a treat. Her strength and determination, she was a small dog but if she decided we were going left, and I wanted to go right, she could quite literally pull me in the direction she wanted to go. How she loved blueberries, and carrots, and broccoli. How she’d howl like she was being skinned alive, just to see if you were within earshot, and stop as soon as she knew she wasn’t alone. How she used to hug my thigh when she’d snuggle up next to me on the couch, and how warm her belly was. How being on a lap was her favorite place to be, until it wasn’t. How soft her ears were. Her snaggle tooth. Her love of the sun.  Her, everything about her.

She taught me so much, she taught me to love in a way that I never had, and never thought I could. 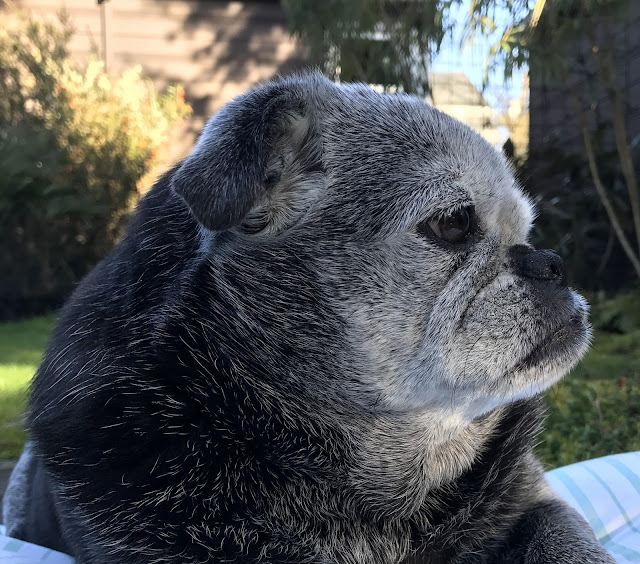