Walking around the Amazon Spheres in downtown Seattle I noticed this billboard truck circling the campus. Clever, and it's asking a good question. Why would they? 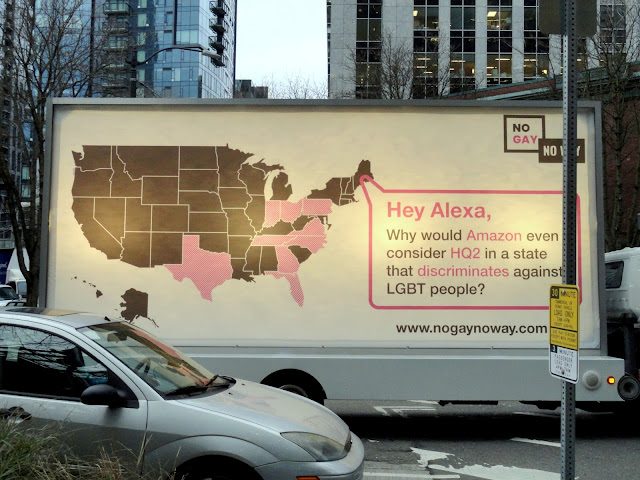 From the site nogaynoway.com: "31 states fail to protect lesbian, gay, bisexual and transgender (LGBT) people from discrimination in employment, housing, and public accommodations. Surprisingly, nine of those states are home to 11 of the 20 finalist cities vying for Amazon’s second headquarters. It is shocking that Amazon would consider locating HQ2 with its over 50,000 employees in a state that doesn’t protect LGBT people or their families. In these nine states, it is legal to fire someone, deny them housing, or refuse them service just because of who they are or who they love."

We've come so far, but still have so far to go. You should not fear for your job or shelter because you happen to love someone who is not of the opposite sex.
(Happy Valentine's Day)