My January excursion to Paris came about because Andrew was headed there for a work trip, of course I had to tag along. His travels then took him on to India. I briefly considered joining him, but let's face it, India isn't a great place for a woman to explore on her own (Andrew was busy with meetings all day, everyday), so I stayed in Paris and my good friend Julie flew over to join me — how lucky am I? A few romantic Parisian days with my husband and then a few more days shopping, sightseeing and café-ing with an old friend.

I was not completely left out of the India experience however, as Andrew took several photos for me, including this first-day on the ground photo of the poor air quality. There's a little morning fog mixed in, but mostly that's smog, and a dirty car windshield. 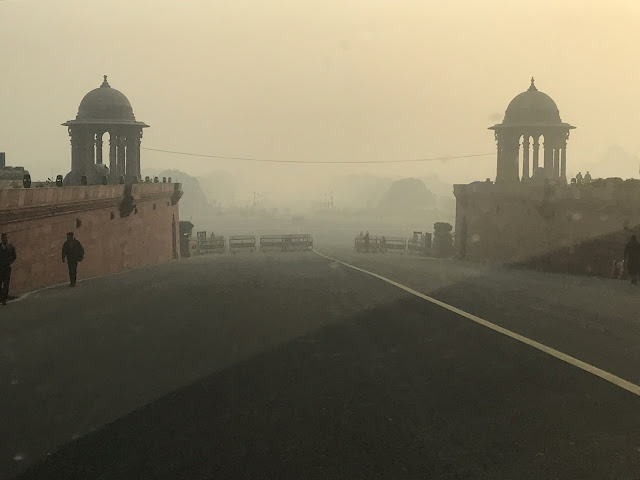 This fabulous display was outside one of the factories he visited. Sad that the lower leaves are all trimmed, but thankfully the taller Cordylines (?) have escaped that fate. 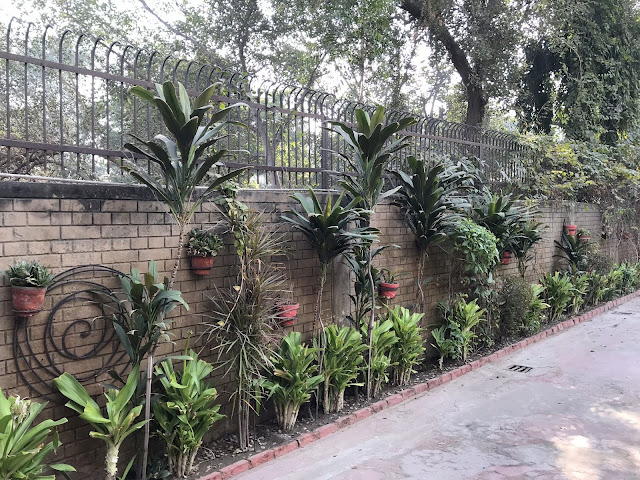 I think this container display may have been at the hotel he stayed in. 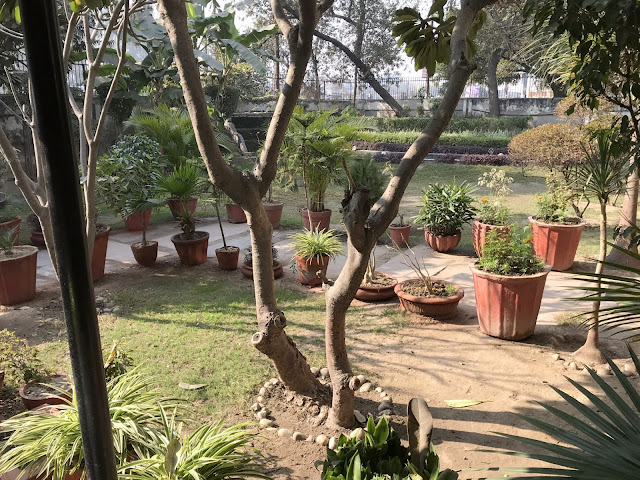 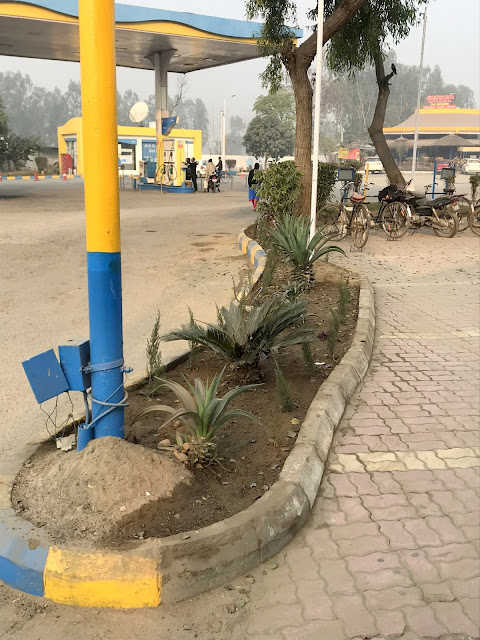 The Sago and pineappled Agaves somehow don't seem to mesh with the small Cypress (or whatever conifer those are). 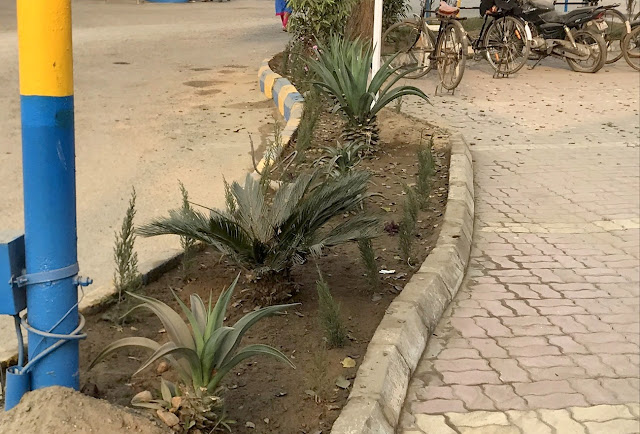 Agave desmettiana? (you can see pups around the base of one above) 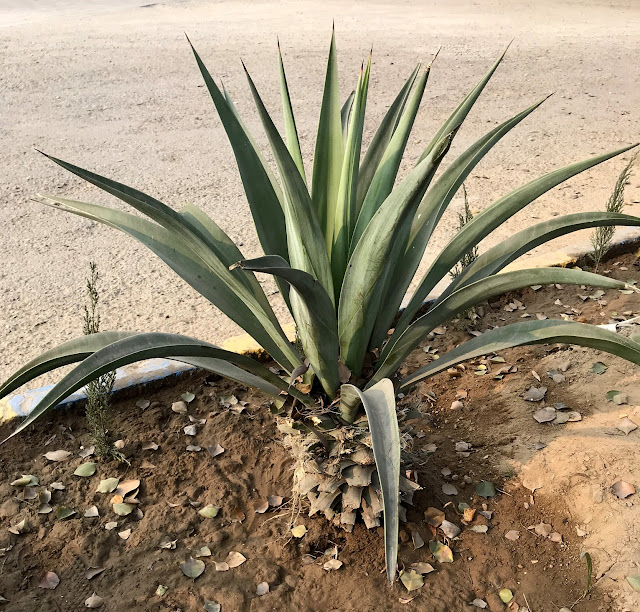 Another customer at the gas station. 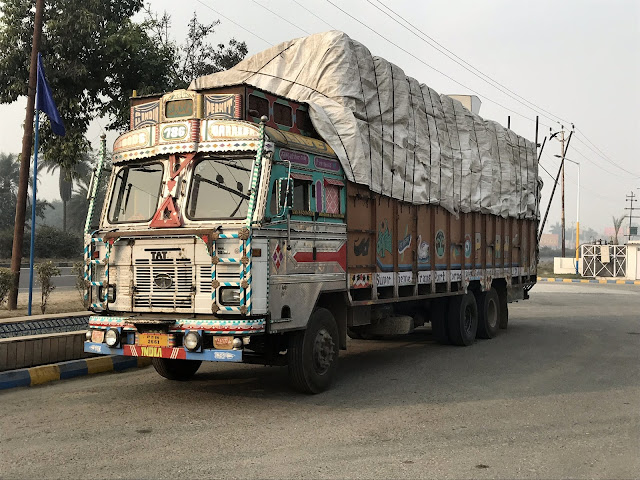 This company is very consistent with their IKEA color scheme aren't they? 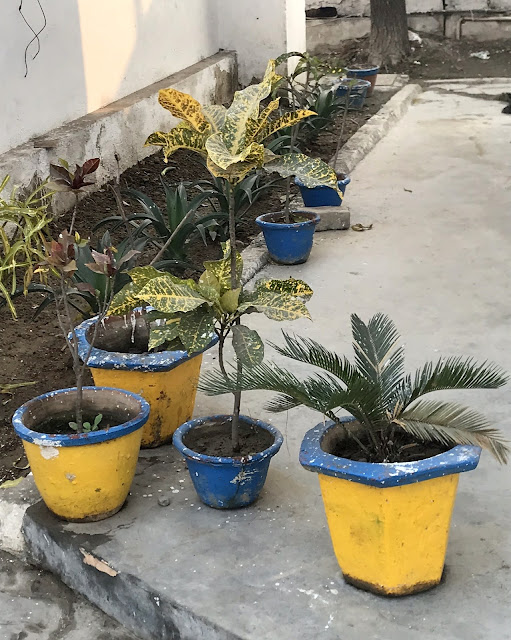 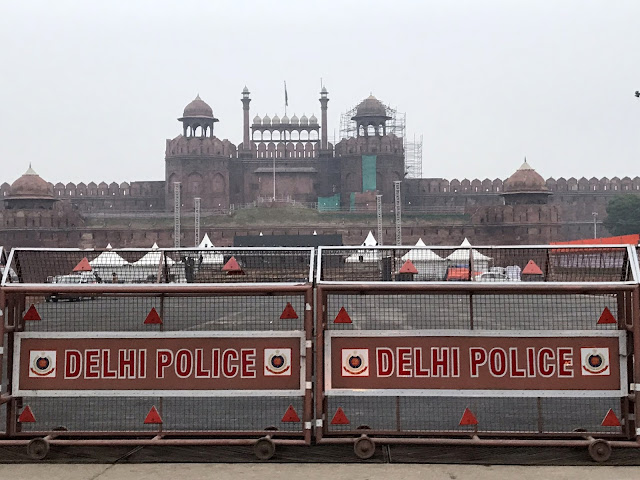 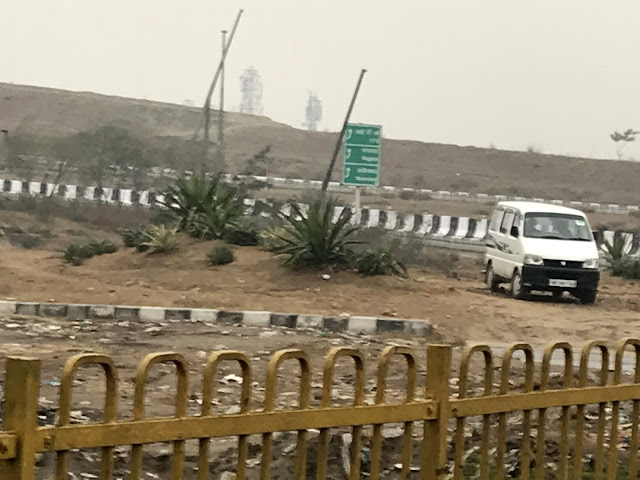 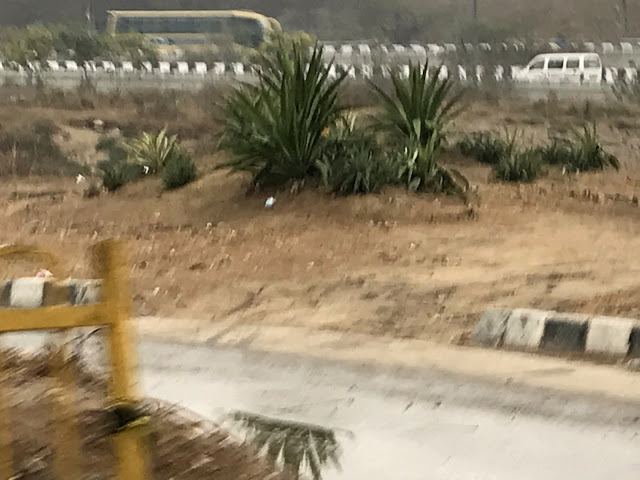 This! The plant (what is it?) the container...wow. 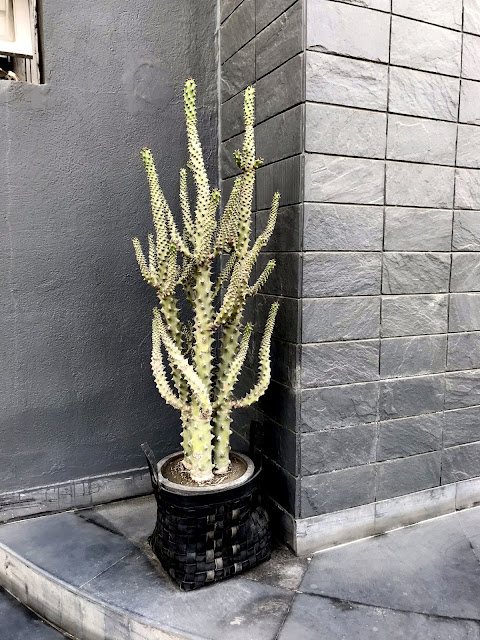 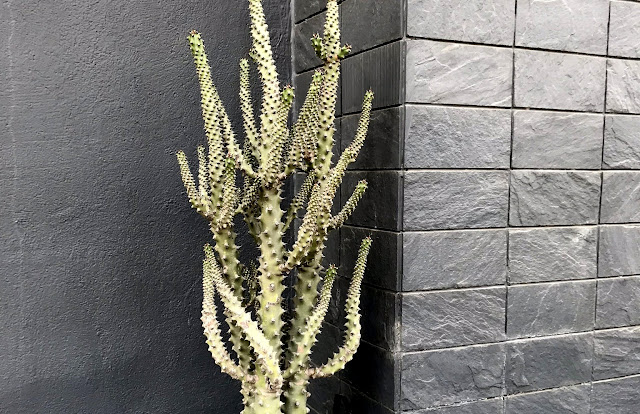 The container looks like one of those made from recycled tires. 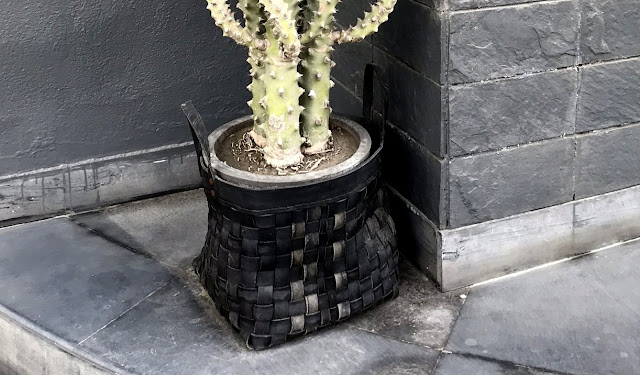 I love this scene... 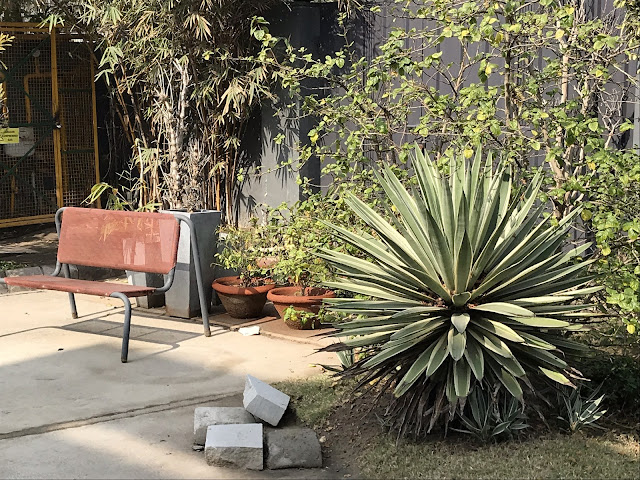 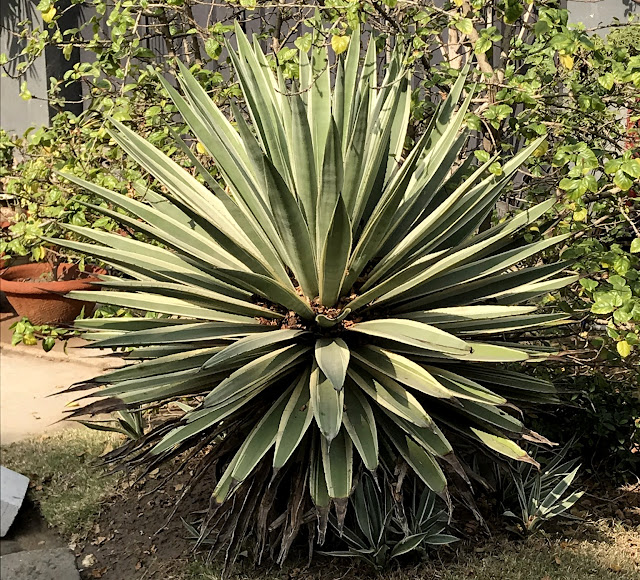 I appreciate the water retention area dug around this Furcraea, although the poor thing looks like it's had a rough life. 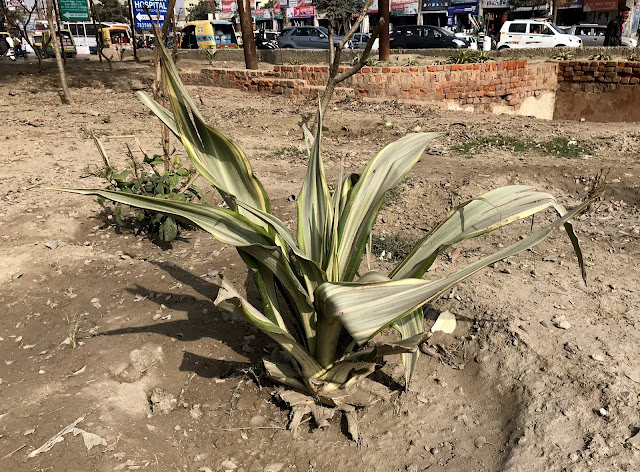 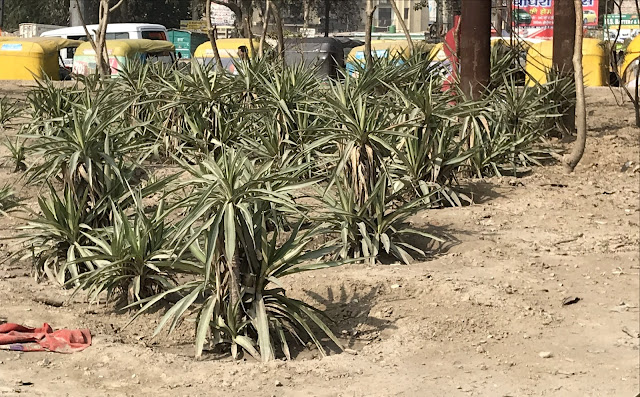 Here's Andrew shopping from a gypsy tool seller. He said another seller nearby loudly berated him for not visiting her table as well. 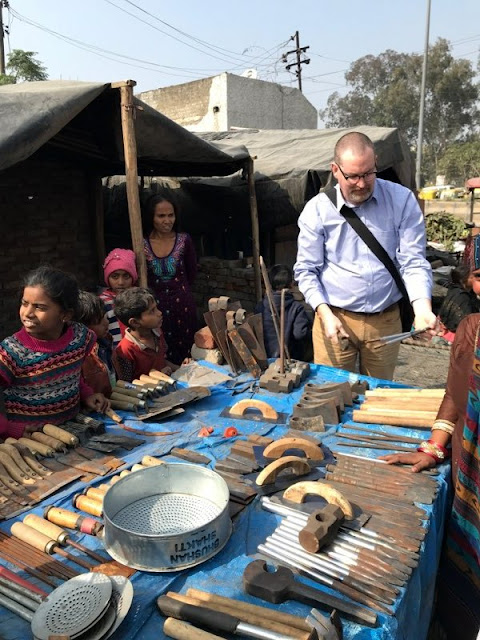 Finally Andrew took a few videos as the moved around the country side, here's a colorful one...

This video is quite a bit longer, and a little hard to watch at times, as you clearly see the difficult living conditions the Indian citizens have to deal with. There is beauty too, plants, wandering cows...