In a Vase on Monday: I'm dreaming of a Cryptomeria Christmas

And not just any Cryptomeria, but C. japonica 'Rasen'... 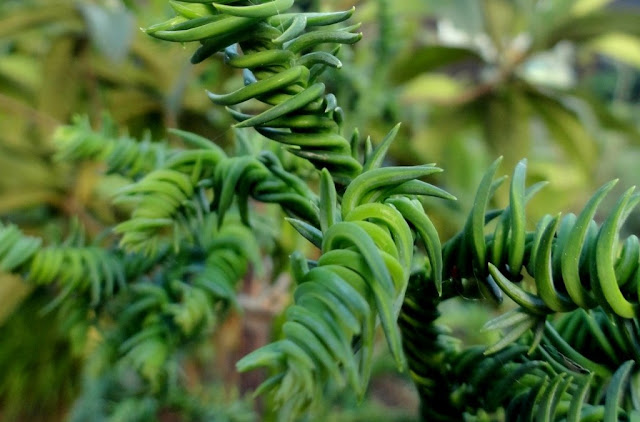 I first learned of this fabulous conifer while researching a story I was writing for the OAN's Digger Magazine. My work took me to Youngblood Nursery, just outside of Salem, that's when I saw this awkward tree next to their office. 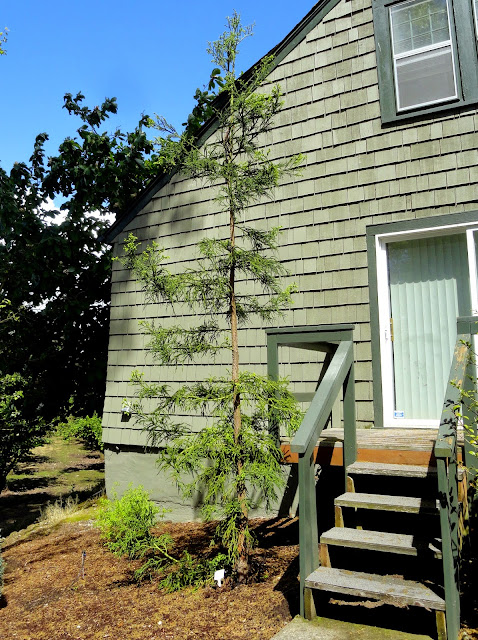 The way the needles twist around the already twisting branches is captivating. Lucky me, I was given a small tree that day, one that was a little too misshapen for shipping out to a customer, but would be just fine in my garden of misfit plants. 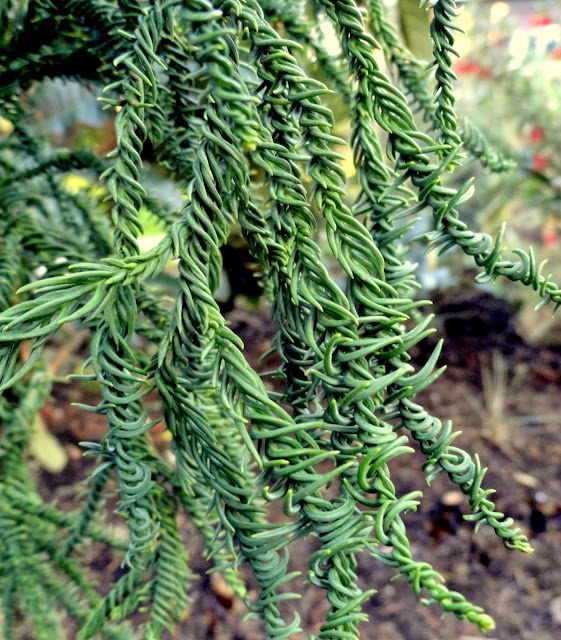 I still remember the words Chris Steinke, sales manager at Youngblood, said when he offered it to me. "If you have room for another tree, in your garden..." Ha! Since when has that stopped me? Seriously though, just look at that photo above, of the plant outside their office, who couldn't squeeze that in just about anywhere? Here it is now, two years after being planted... 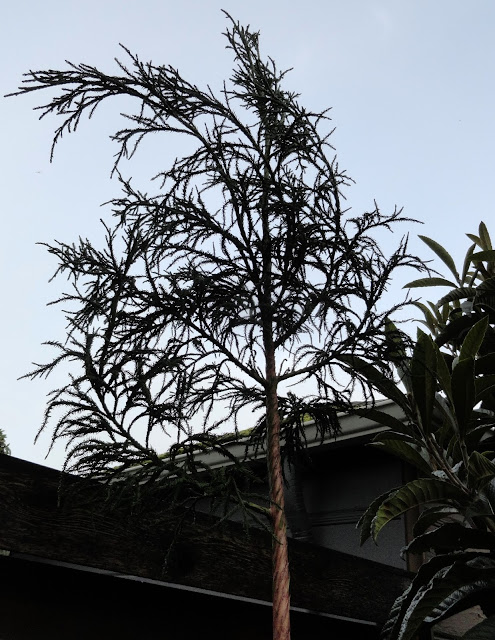 I would love the opportunity to use this as a Christmas tree, but since it's in the ground that's not going to happen (well, unless it gets really big and needs to be cut down...). 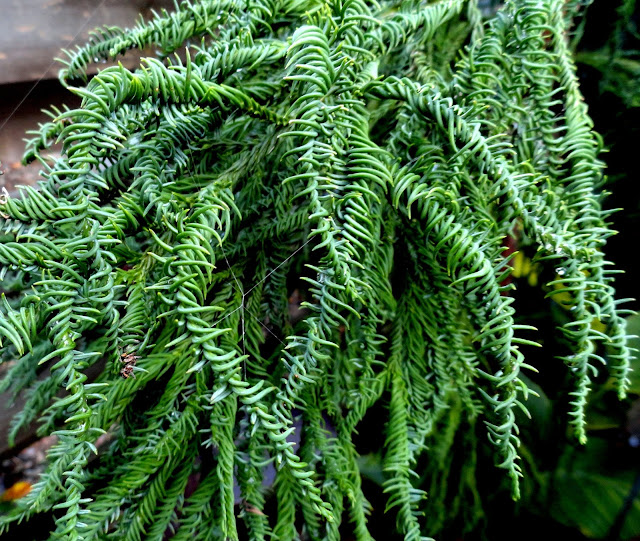 However there's plenty of lower growth that I needed to prune, and that's what I've used in my vase today. 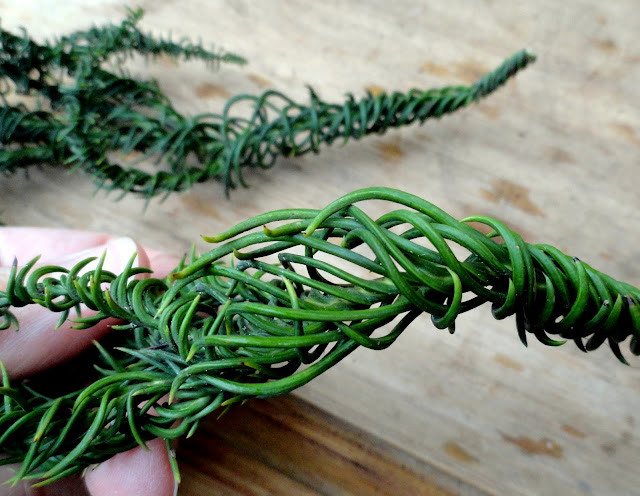 Along with the silverest plant in my garden, Lupinus albifrons. 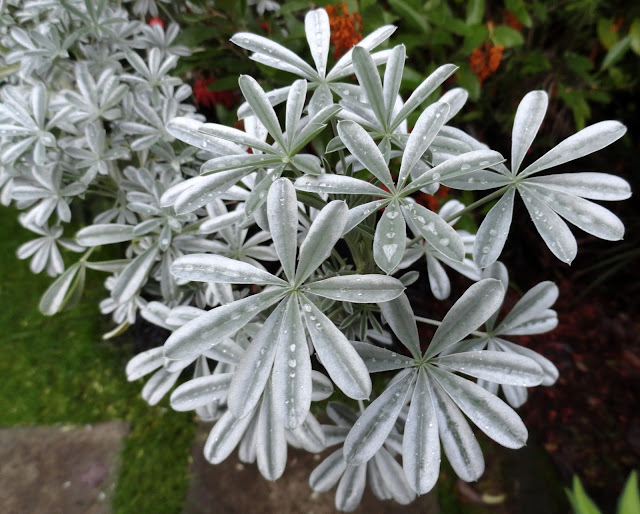 And  Leucadendron 'Silvan Red' — for those red stems, and the fact this plant isn't really hardy here in Portland. Gotta enjoy it while I can! 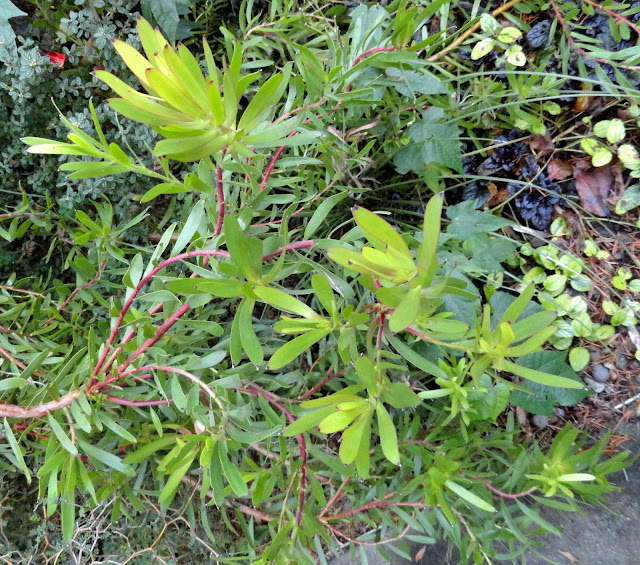 In case you're wondering — I'm not one of those people that goes all-out at Christmas time, it's just a few targeted spots for me. The living room gets the tree (whatever form it may take each year), of course the mantle is "done," the dining table gets a Christmasy centerpiece, and there's a wreath on the front door. That's it, besides this... 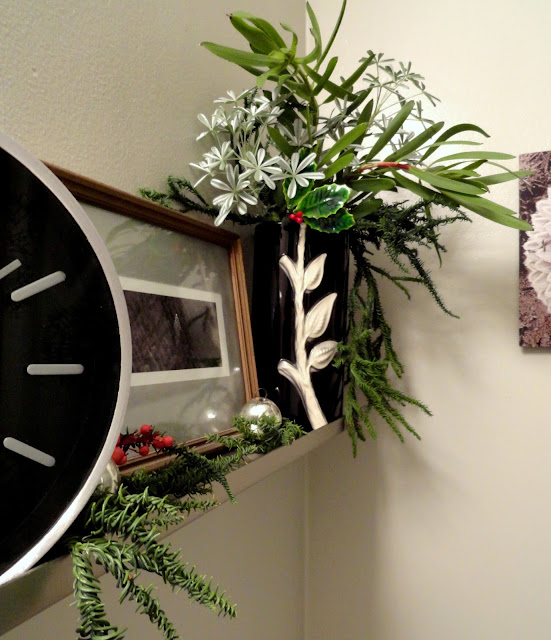 The shelf in the bathroom gets a touch of Christmas too. 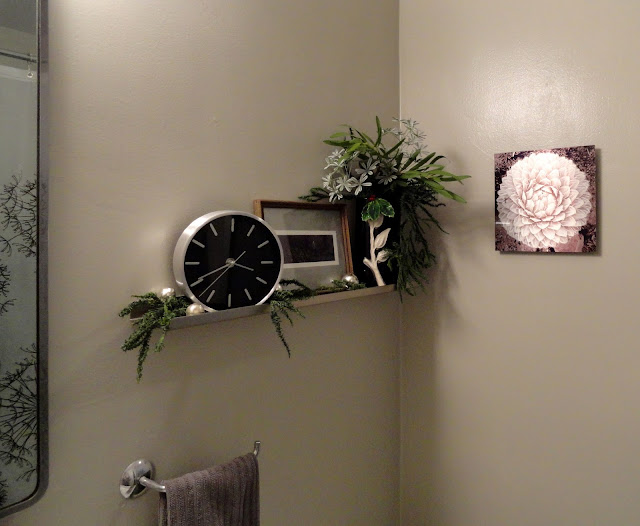 That's where I decided to use my Cryptomeria bits... 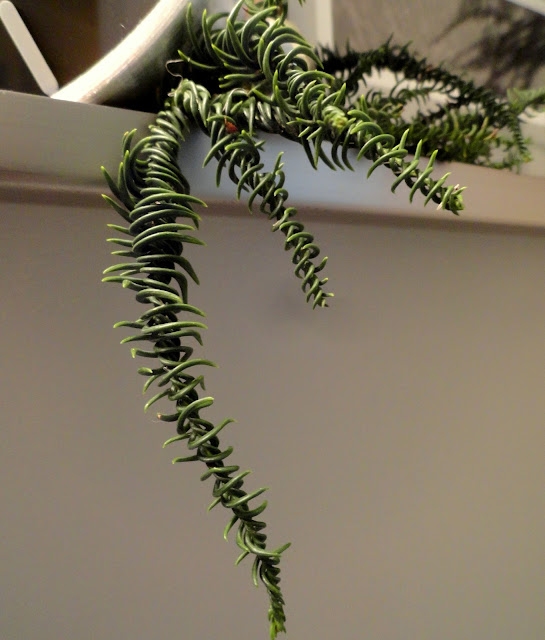 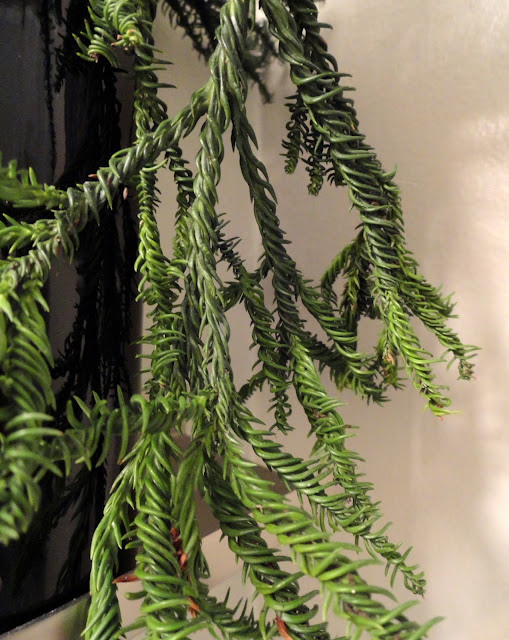 The Lupine doesn't read quite as silver indoors, but its still pretty shiny. 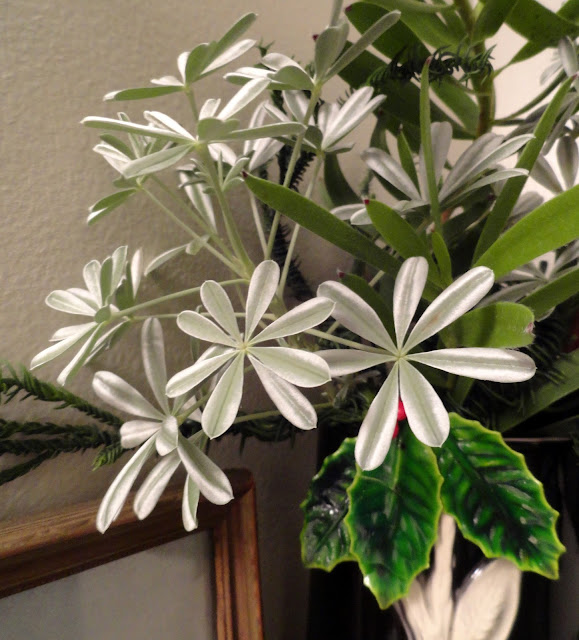 The holly pick is one I inherited with some ornaments from my grandparents. It seemed more appropriate than the severed elf head, another passed-down treasure. 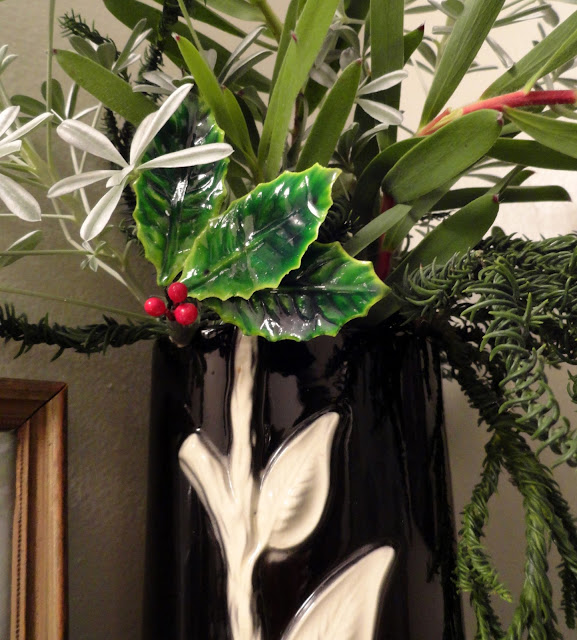 That little framed tree print has been with me for 20 or so years. It makes me happy to see it each year. 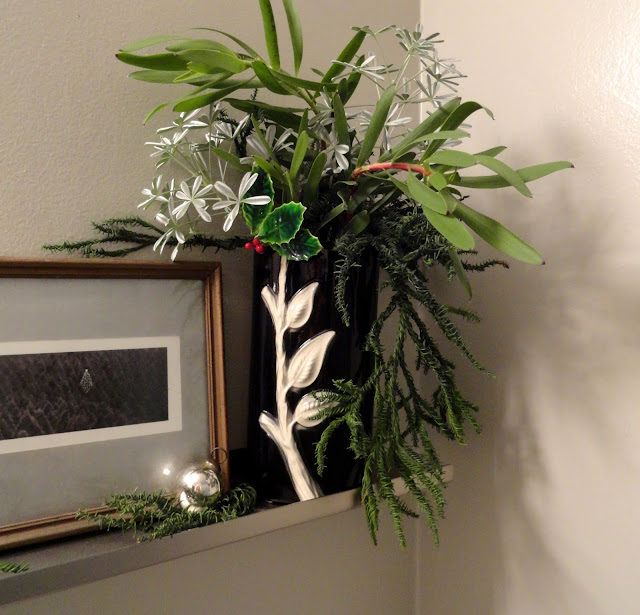 And the new clock begged for a few shiny silver ornaments. 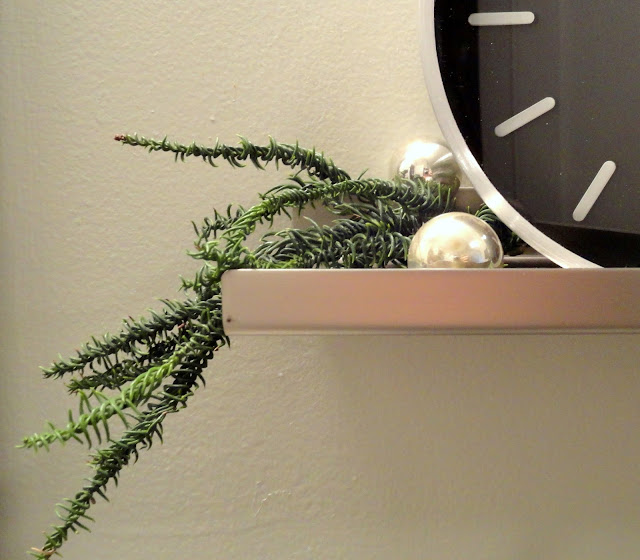 Another cherished part of the scene, this aluminum print from Gerhard, although it's here year-round. 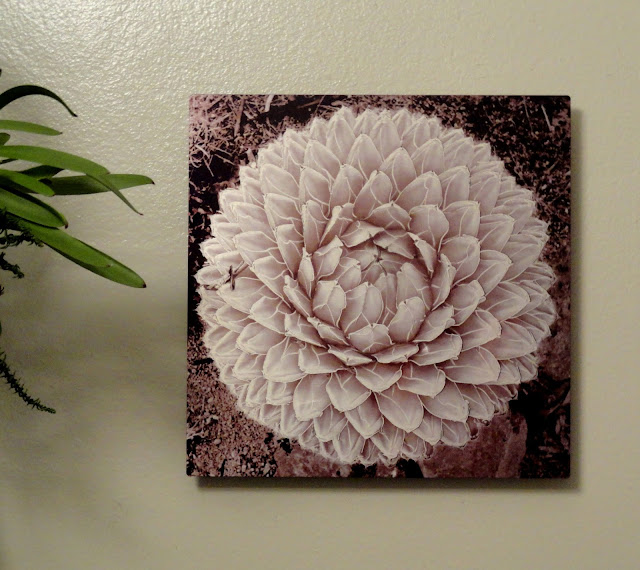 And finally a few red Nandina berries for color (foraged nearby). 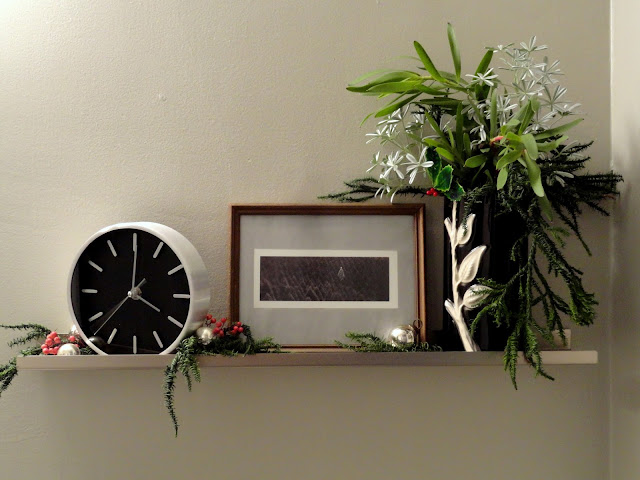 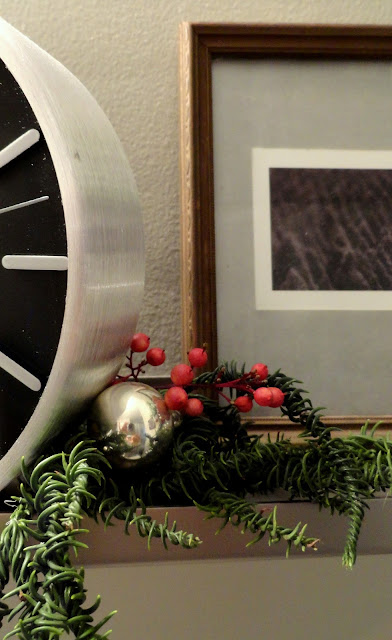 What greens can you cut from your garden to bring indoors for the season? Fill a vase and then join the "In a Vase on Monday" fun, links over on Cathy's site, Rambling in the Garden. 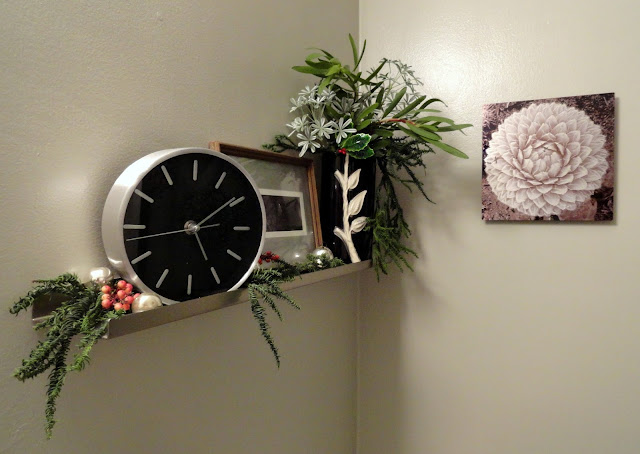