My Garden of Misfit Plants

You've heard of the Island of Misfit Toys right? Well I've realized my garden has become the Garden of Misfit Plants, or maybe I should say misshapen plants. I don’t know exactly how it happened; I don’t intentionally buy the deformed plant. I started thinking about this after purchasing the Blue Atlas Cedar I mentioned last week. 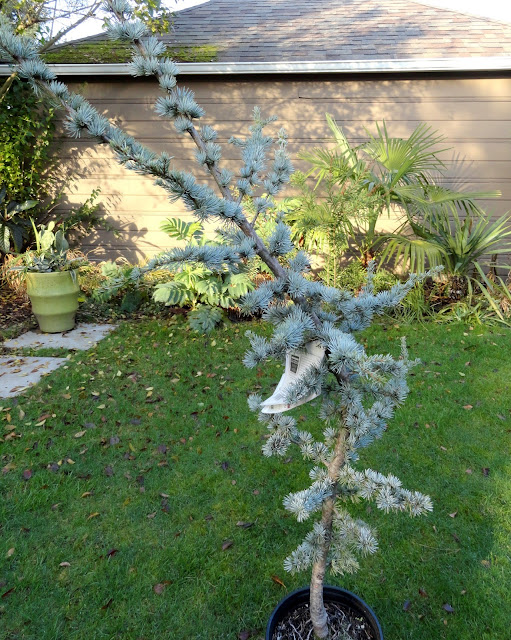 See it has a definite crook to its trunk. It’s not a deal breaker, otherwise I wouldn't have bought it, but I guess when planting I need to stake it in such a manner that it might straighten out over time.

Here’s a pretty extreme example, my Poncirus trifoliata. Just look at that curve! 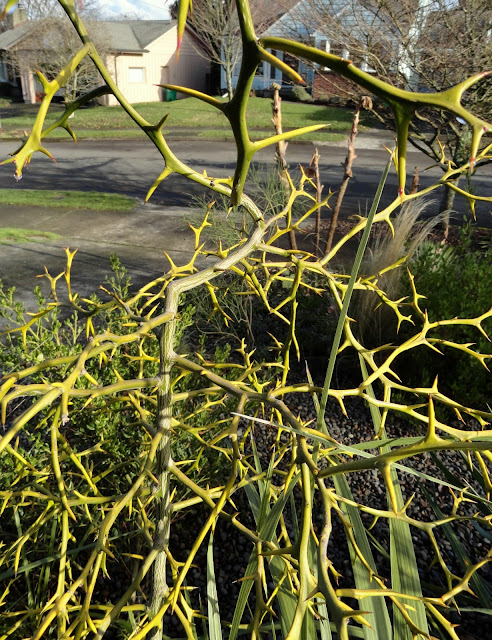 When I bought it several years ago I didn’t realize it had essentially been topped, I just thought it was a great plant at a great price. The transaction was a little awkward at the counter and I’ve always wondered if they were just happy to unload a damaged plant on a clueless customer. Either way I try not to shop there anymore (for several reasons), and the plant is trying to grow out of its unfortunate disfigurement.

Here’s one I purchased realizing full well it had issues. This Arctostaphylos densiflora ‘Sentinel’ was trained as a standard, but it didn't quite live up their expectations. When I found it there were definite signs of scoliosis but I liked it anyway. I hope it isn’t doomed to breaking someday when the weight of a snow, or ice, load becomes too much for it. 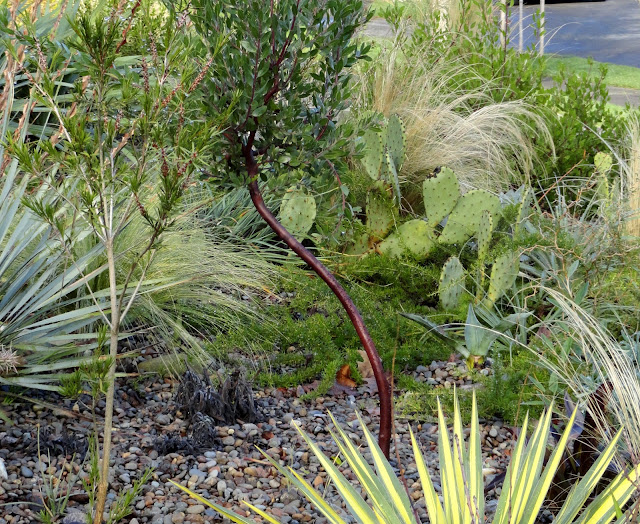 Another of my Arctostaphylos, A. densiflora ‘Harmony’ is supposed to grow 5ft high by 6ft wide. Looks like it will make the 6ft wide no problem, but the 5ft high? 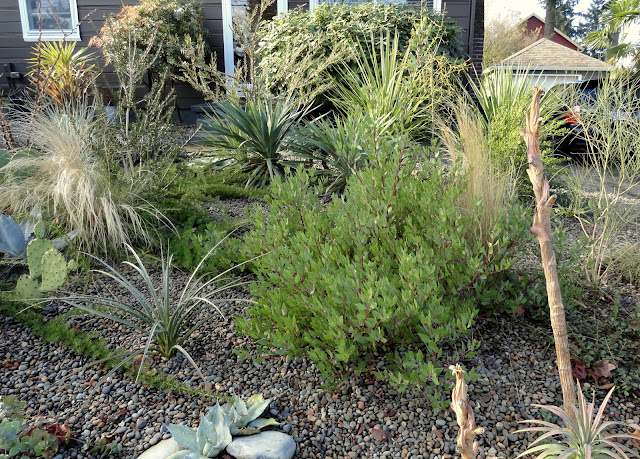 I bought the 'Harmony' with a slight tilt to it, hoping it would grow up to have graceful lines like this plant nearby… 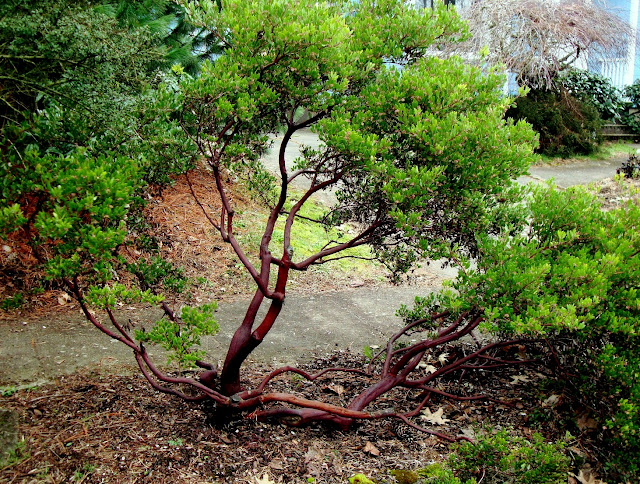 Instead it looks like a blob! What a waste of a lovely plant, I need to get in there and do a little judicious pruning and training. 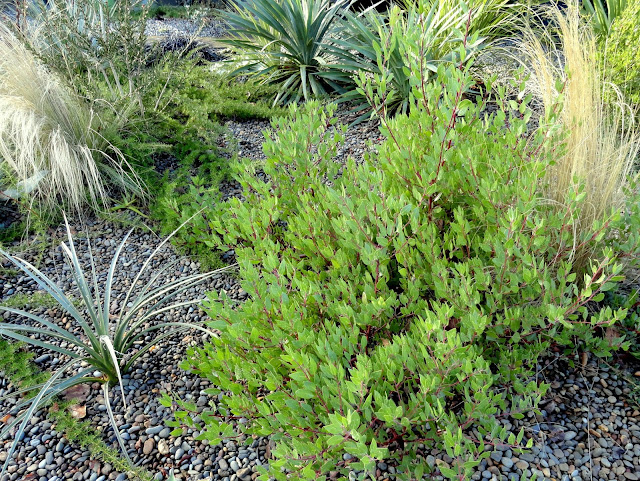 Here’s one that’s just a little odd, this Cotinus ‘Royal Purple' has stayed virtually the same little miniature shrub since I planted it almost 3 years ago (that’s it in the center with no leaves). 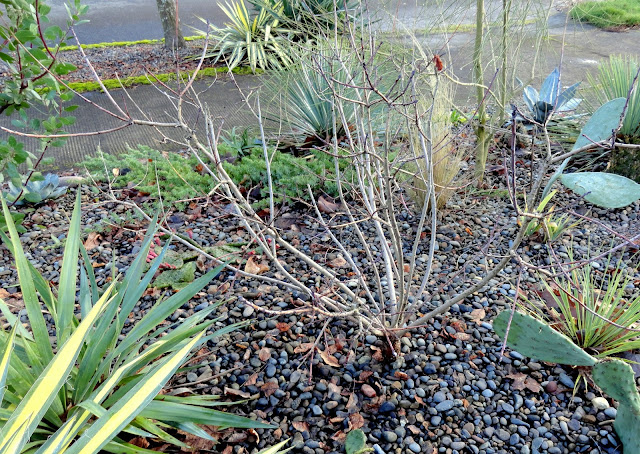 Since this plant has such a reputation for being rangy it’s odd to see one stay so compact. I've been told it’s because it likes a lot of water and I’m pretty stingy out here in the front garden in the summer. I've planted a couple of other plants nearby for height and made my peace with this one staying just a short dark foliage accent.

Next up is one of my Callistemon ‘Woodlander's Hardy Red’ it was this wee little stick when I bought it (for the amazing price of $1.98)… 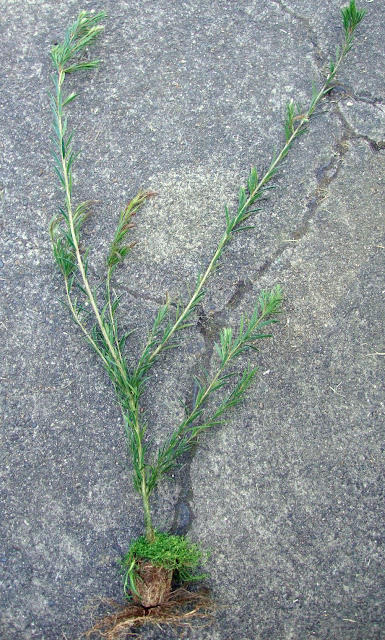 At the time I thought it had a strong leader, but this is what the base looks like now. 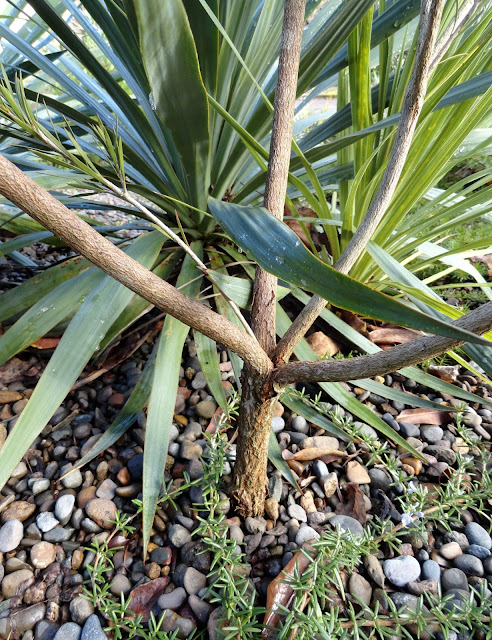 Just a few inches tall and then it splays outward in five different directions. 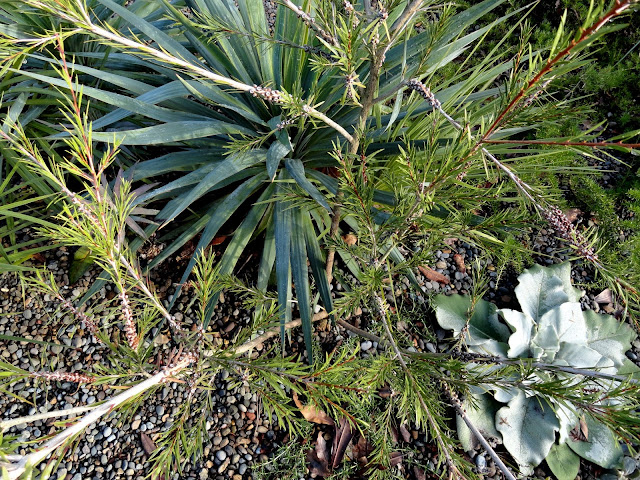 It’s a lovely little plant but I just wish was taller before it split all willy-nilly! 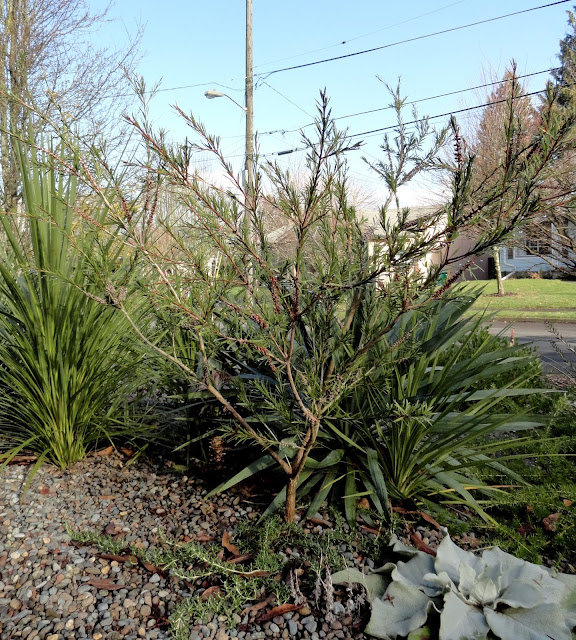 Here's it's sister $1.98 Callistemon I bought a year later. It's looking much better! 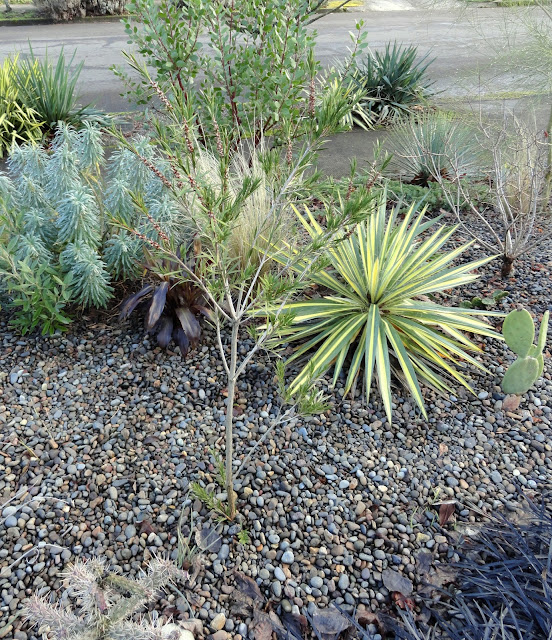 Finally we finish with a gift plant that simply reinforces my theory that I attract misshapen plants...a lovely ginkgo that refuses to grow upright but rather takes off at a jaunty angle. This photo is from 2011 when it was given to me. 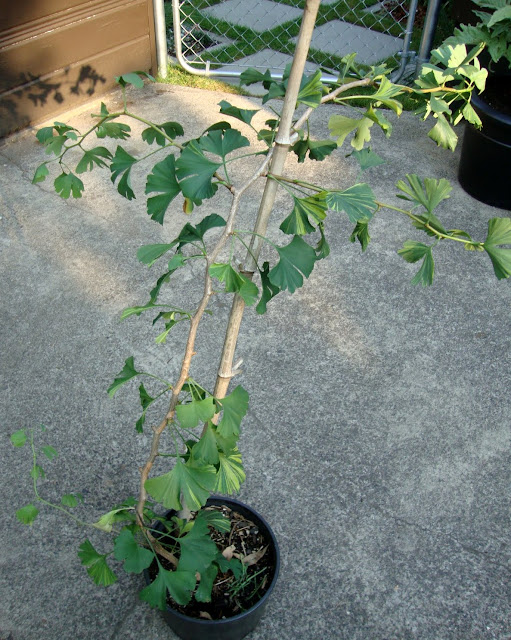 Here it is last summer, I tried to take a photo of it now to share but without its leaves it was a little hard to see. 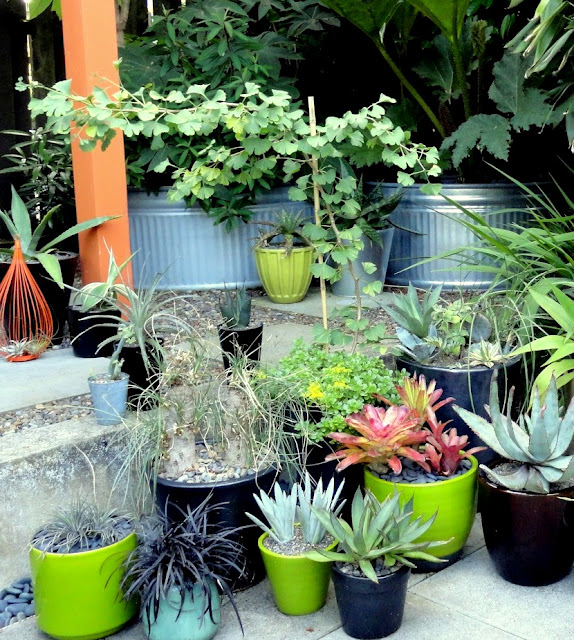 So there you have it, my collection of happy misfits.

Labels: Callistemon, learn from my mistakes, Manzanita, my garden, shrubs