Since my favorite plant feature this week is a favorite because of its foliage it seemed a natural to combine these two topics into a single post. May I present the Saxifraga… 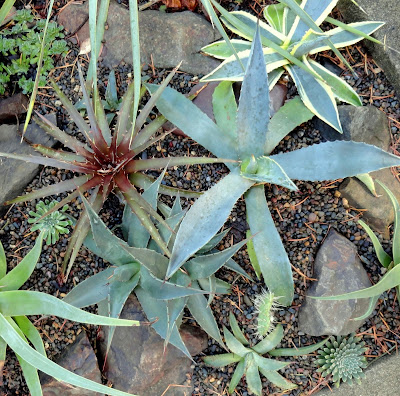 Yes they’re there….I’m referring to the small white edged rosettes, this one… 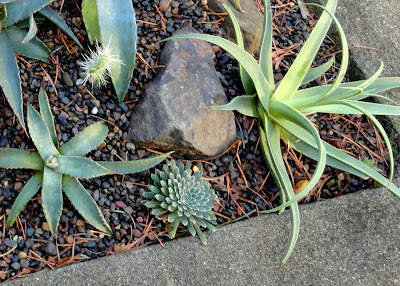 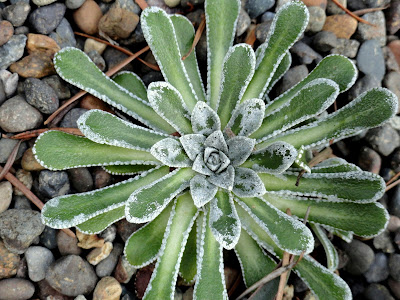 I mistakenly thought I was getting Saxifraga longifolia when I purchased these, but actually I now realize they probably aren’t because they haven’t gotten nearly as large as S. longifolia promises to be (almost 8” across). One label I have actually says Saxifraga x longifolia so perhaps that’s what they both are (a third flowered and died last summer). Whatever they are I love them, after all I’m a sucker for a tidy rosette.

Here’s an interesting little tidbit I picked up from the Wikipedia: “the Latin word saxifraga means literally "stone-breaker", from Latin saxum ("rock" or "stone") + frangere ("to break"). It is usually thought to indicate a medicinal use for treatment of urinary calculi (known as kidney stones), rather than breaking rocks apart.” There's some useful cocktail party chatter for you!

Another favorite Saxifraga is S. macnabiana, its leaves look outlined by frost even on a warm summer day. 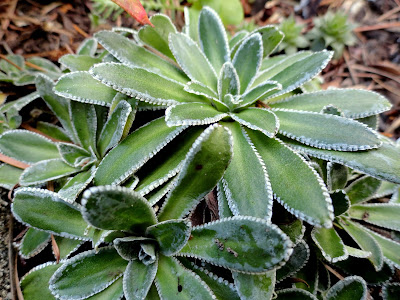 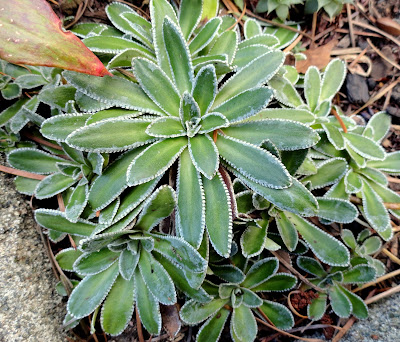 Just don’t let them get shaded out by neighboring plants, they’ll quickly melt away and disappear (I speak from experience...). 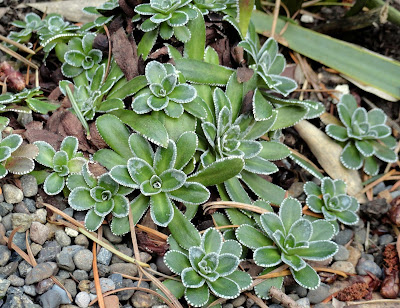 I picked up this Saxifraga x urbium 'Primuloides' last fall at a nursery sale, well actually I picked up two but later discovered one of them had virtually no roots due to rot. I hope this one spreads fast as I love its varied shades of green. 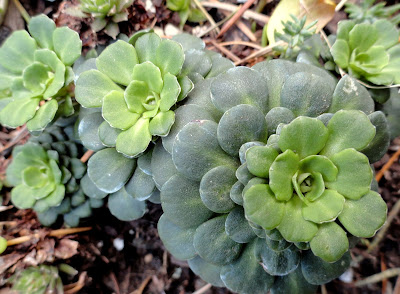 One of my original Saxifraga loves is S. urbium ‘Aureopunctata'… 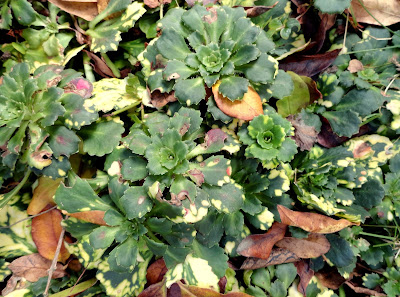 This time of the year it’s almost buried under leaf litter from the huge Privet above, but once I get around to cleaning it off the splashes of yellow on the leaves just shine. 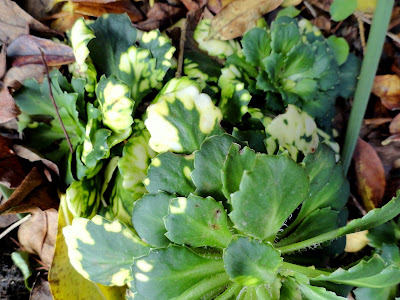 And I realized I do have another Saxifraga that I completely forgot to take pictures of! Saxifraga x geum 'Dentata' if you’re curious there are couple of my photos of it here (as well as 27 more varieties!). For more Foliage excitement visit Pam at Digging, our hostess for this monthly adventure.

Labels: foliage follow-up, ground-cover, my fav plant in the garden this week, Saxifraga