In a Vase on Monday - the Poinsettia Challenge edition

Right up front let's acknowledge that I'm breaking the rules AGAIN. Poinsettia do not grow in my garden, and in order to participate in "in a vase on Monday" you're supposed to work with things from your garden. However everything else in the vase did come from my garden (or in the case of the conifer branches scavenged from the park just a block away) so hopefully since 4 of 5 elements are as intended that means I'm in...

So this is another post on the Poinsettia Challenge. For my attempt at a cut flower arrangement I wanted to work with a slightly garish poinsettia, just to see if I could deal. A quick trip to Target unexpectedly produced more hideousness than I was prepared for, purple with glitter? 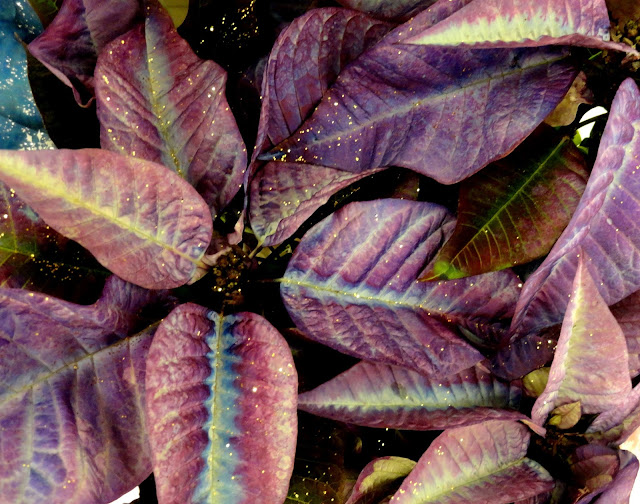 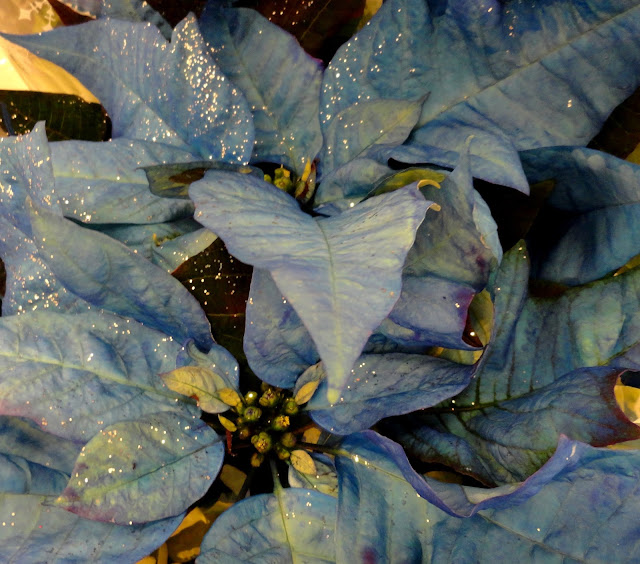 Or red with glitter? Oddly I'm not ashamed to admit that in a moment of Dorothy/Wizard of Oz fanaticism I actually considered working with the "ruby slippers" of poinsettia land. But since I don't live alone I just said no. I didn't want to send Andrew out crying into the streets because of a red glitter pointsettia. 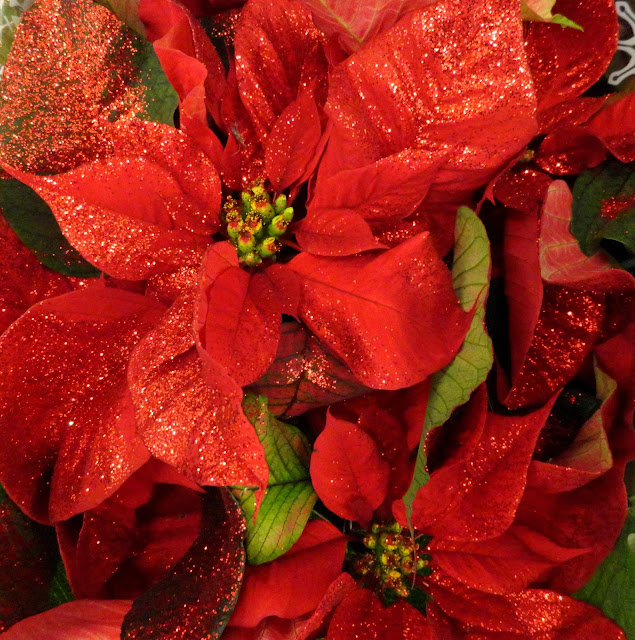 This is what I settled on, it's a bit obnoxious, but also kinda cool. It reminds me of my grandma but I'm not sure why, I should ask my mom. Anyway, I found this treasure at Home Depot. My previous Poinsettia Post included plants from a small local nursery, time to turn the tables and go Big Box. 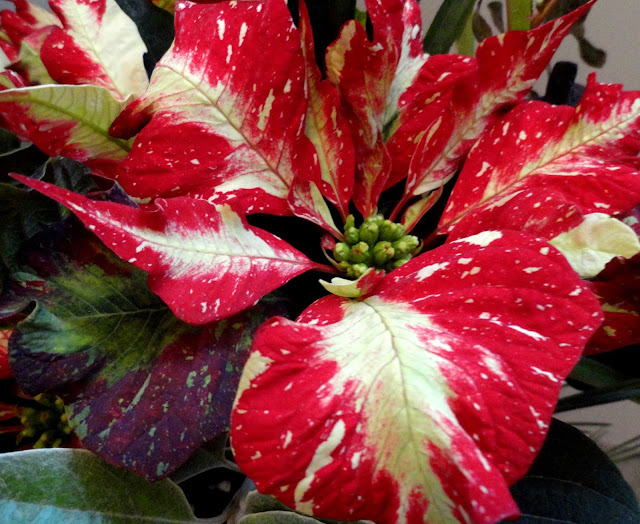 I spent quite awhile checking out the various plants at HD, and once I'd settled on the stripy variegated one I was looking it over - and that's when I realized one of the stems was broken. You couldn't tell by looking at the colorful bracts, they were as happy as could be. I bought it anyway, brought it home and stuck that stem in water, where it spent almost an entire week and never missed a beat. Still, when it came time to take cuttings from the plant I went ahead and seared the tips as recommended here. Probably just becasue I wanted a chance to use my fancy wooden Agave matches. 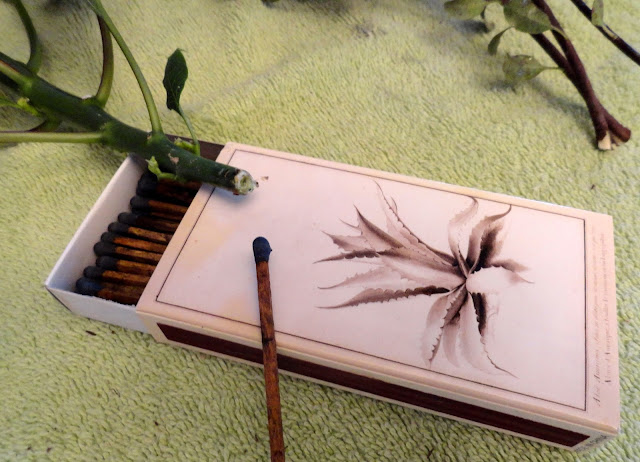 There were a few tiny blooms/bracts on the plant that I couldn't let go to waste. Those were used too, more on that later...in the meantime an aside: see how I'm wearing rubber gloves? I learned the hard way. DO NOT go scavenging fallen conifer branches and then answer your iPhone. Don't do it. Pitch is difficult to remove from your fingers - imagine removing it from your phone. It's not something you want to do, trust me. 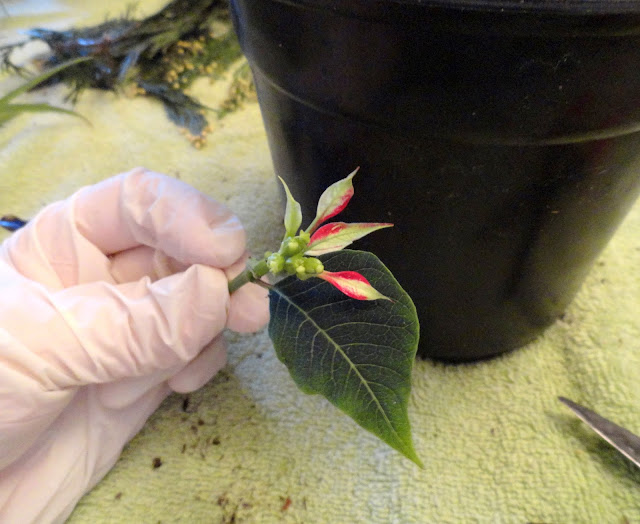 Back to the vase: when putting together the mantle-scape I'd bought a silver teapot with simple lines which I didn't use. That's what I decided to use for this arrangement. A glass tumbler was placed inside so I didn't have to worry about leaching chemicals or water flowing out the spout. 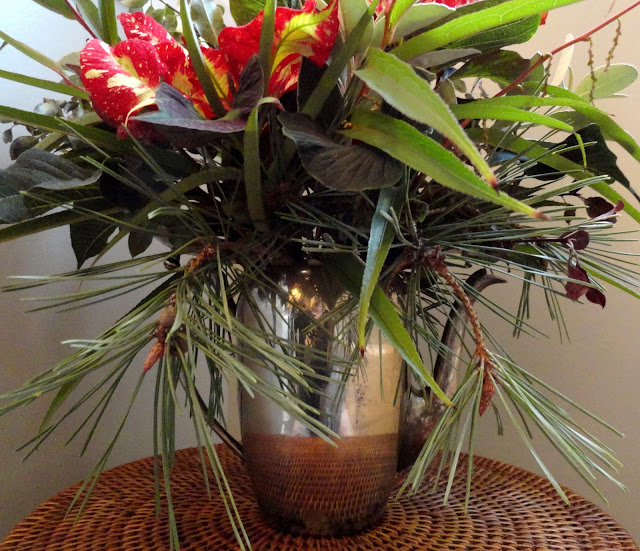 I feared that our insane rains would make it impossible to cut things from the garden but inexplicably the morning I decided to put it all together the sky cleared and there was actually a little bit of sun. It was heavenly. 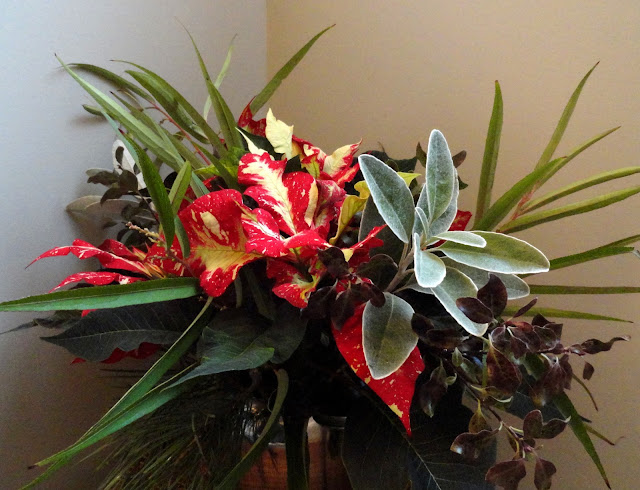 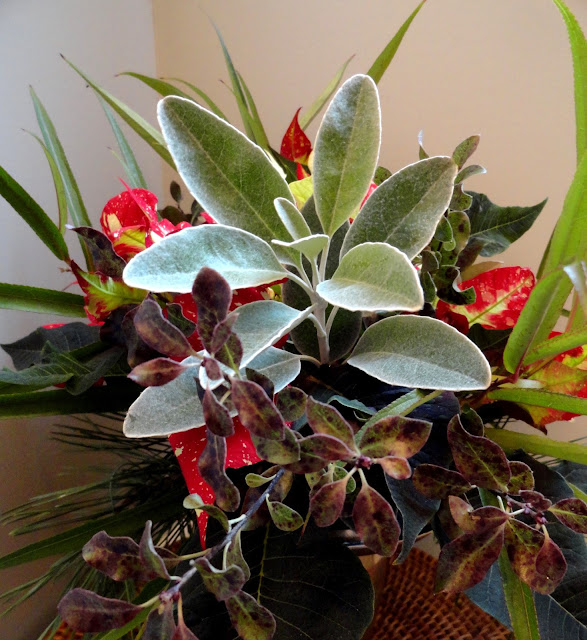 Around the bottom are the conifer branches picked up on walks around the neighborhood. 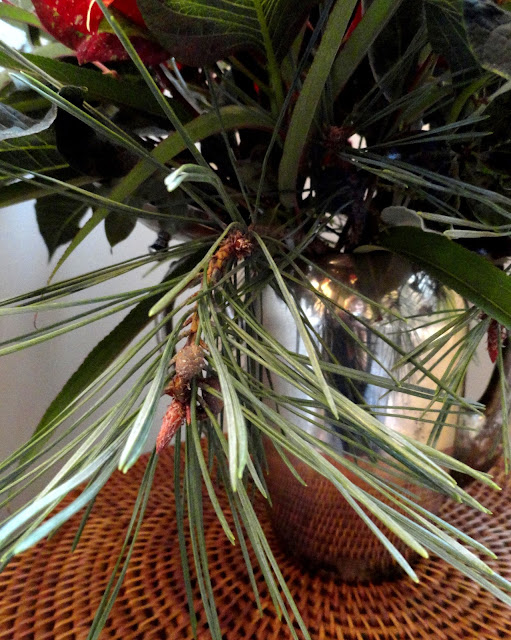 And Stachyurus salicifolius branches were included for their foliage, catkins, but mostly for the pink stems. They play so nicely with the colorful poinsettia bracts. 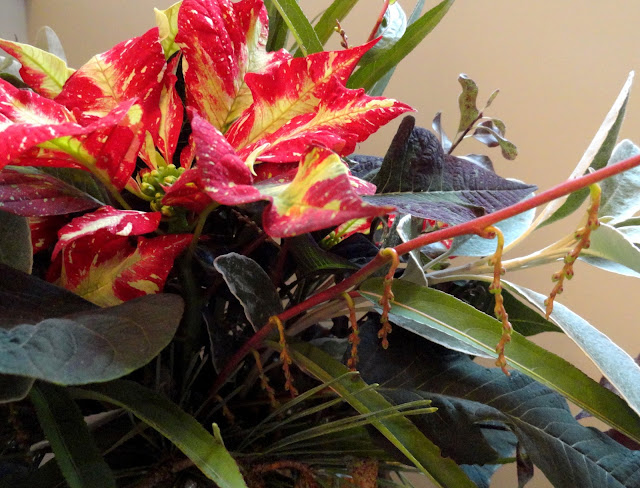 The mix makes me very happy. 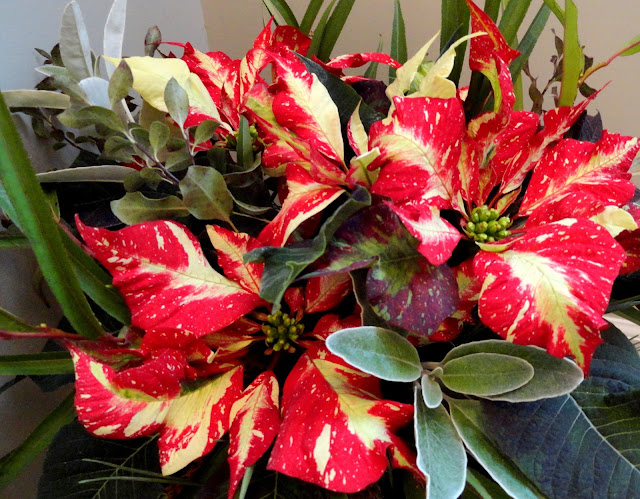 Remember those tiny bracts I showed you early on? (in my gloved hand) Well I couldn't just toss them - so they went in a very small arrangement. 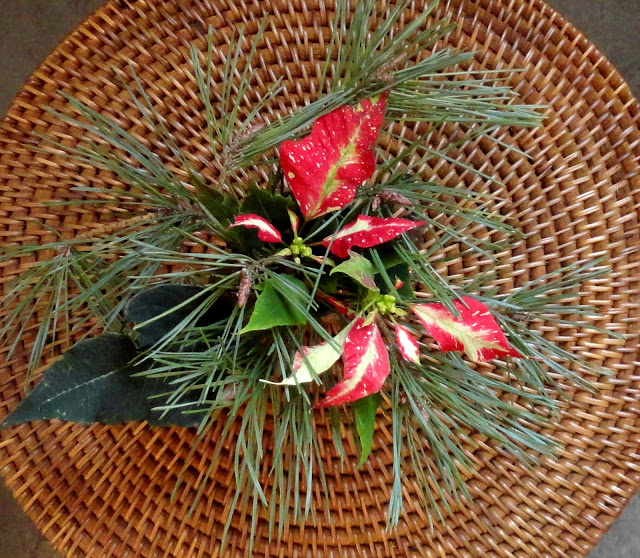 Along with another conifer branch. The whole thing is in a mercury glass votive holder... 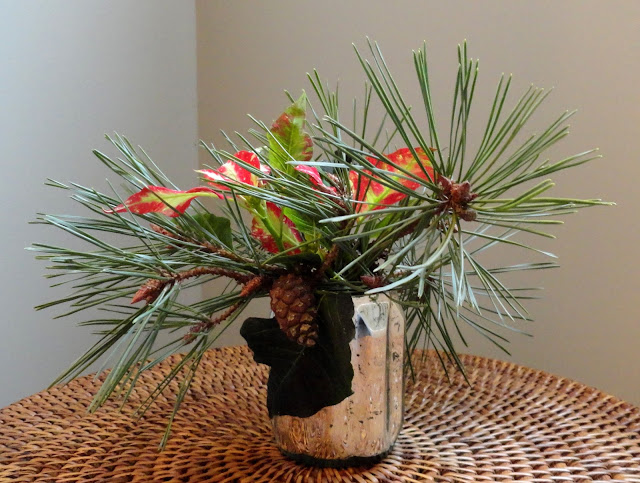 Here's the pair, they're currently living on our dining table but it's impossible to take a clear detail photo there. This one is a bit antiseptic but at least you can see the overall look. 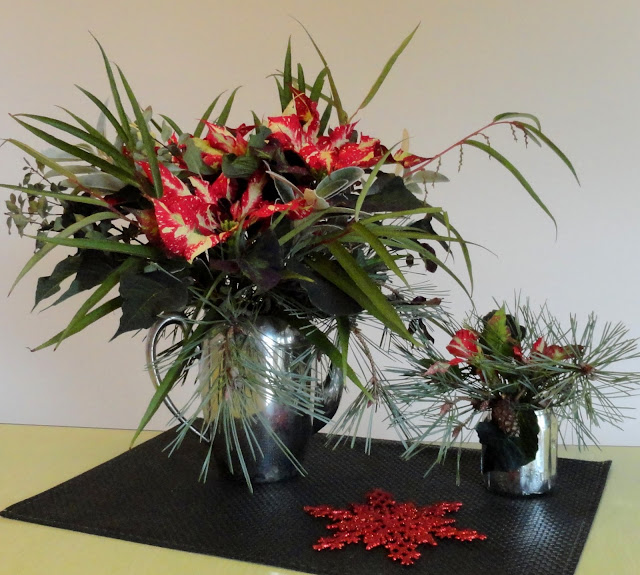 Here they are all mashed together on the table, sadly the color is dreadful in this photo, it's better in person, "In a Vase on Monday" is hosted by Cathy at Rambling in the Garden. I hope she doesn't permanently ban me for breaking the rules, again... 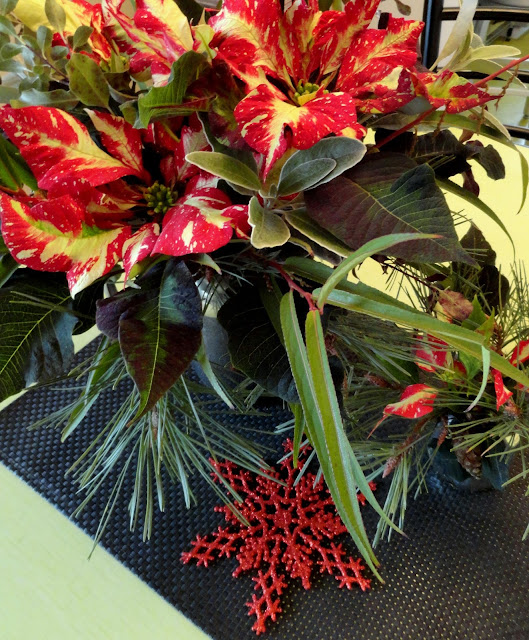 If you're inspired to participate in the Poinsettia Challenge just email me (spiky plants at gmail dot com) an image of your poinsettia creation. Others have been including a title and a one or two sentence backstory on what they've come up with so if you're so inclined please do! 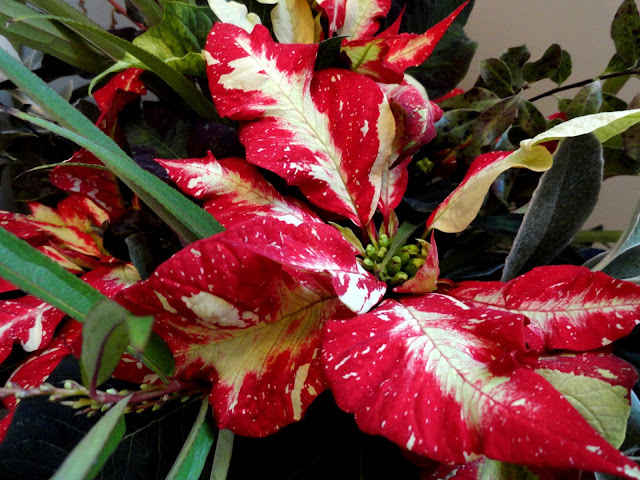 Labels: in a vase on Monday, Poinsettia Challenge