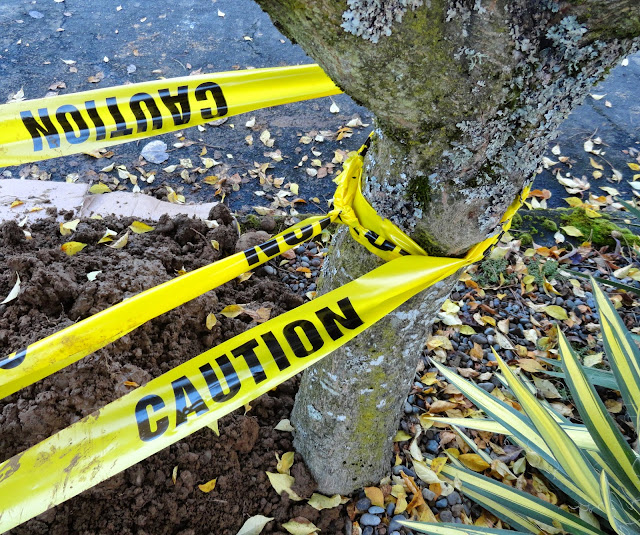 It's 2006 and, sod removed, you planted your front garden. The plants were small but they grew and grew and finally the garden began to look just as you dreamed it would. And then (about 3 years in) the crazy zonal-denial-dream that you and all of your neighbors were living burst.

The plants are dead.

But hey, that was just a fluke, you replant.

And the next winter it happens again. You wise up and realize you moved to Portland during a historically long run of warm winters and all the plants you fell in love with, the ones you’ve seen growing all around town, were living on borrowed time. Monster trunking cordylines and blooming phormium are not plants suited for the long term in Portland, Oregon.

Attitude adjustment. You replant the front garden (for the third time) with plants that are indeed going to live long term in your climate (well most of them, there will always be the exceptions). They’re tiny but they will grow, you can picture it, what it will be…

Then 3, almost 4, years later when all those plants are finally looking as you thought they would, almost mature versions of themselves, well…

It’s a Saturday night and you wake up to the sound of water rushing through your pipes and in your foggy state of mind (after all it’s the middle of the night) you can’t quite place it but eventually you realize it sounds like you’re running the water out in the garden. But that can’t be right because it’s the middle of the night, and it’s been raining like Noah’s out there building something, so you’re not watering and what the heck is going on?

Yes I’m being a little dramatic. All that is to say the main water line from the street to our house busted, the needle on the water meter was spinning faster than a second hand on an analogue watch, times 10.

And all I could think of were the plants that lay along that line from the water meter to the house. A line I was envisioning dug open, trench-style 2 or 3 ft wide... 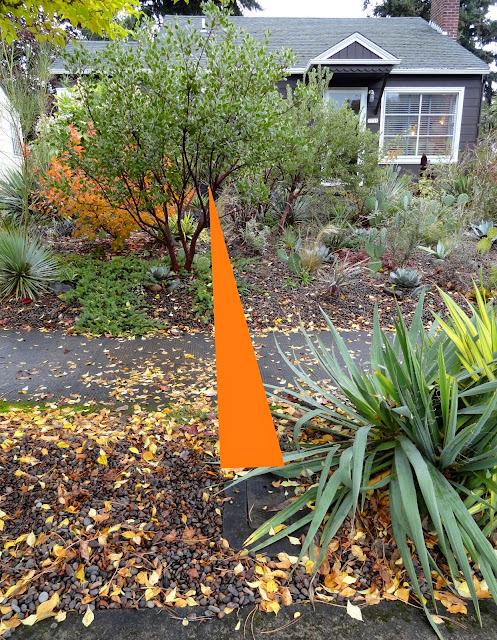 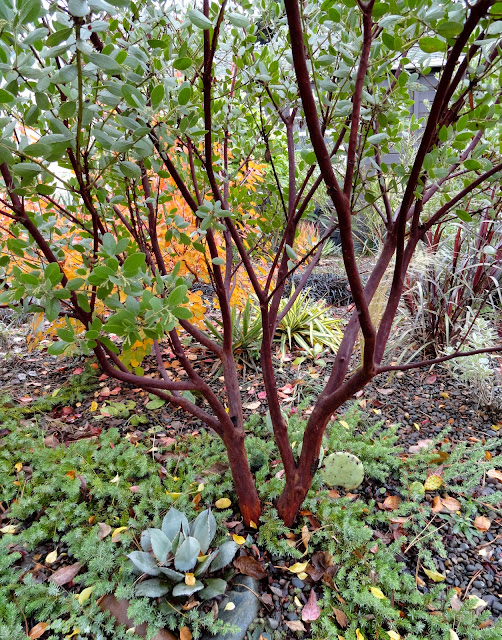 And the Callistemon ‘Woodlander's Hardy Red’ (I know, you can barely see it what for the overplanted mess...) 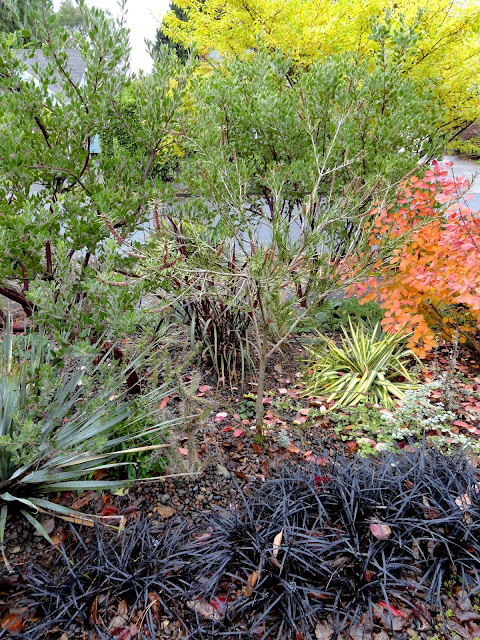 Luckily up against the house there wasn't much, a benefit of my keeping the hose (and walking) path clear. 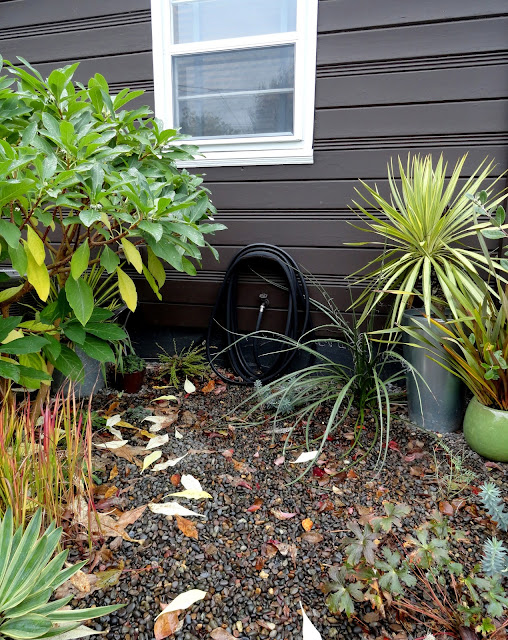 After worrying for a good day and a half the plumbers started showing up to address the problem (oh ya, and we were doing without water, turning the main on at the street long enough each night for quick showers and bucket filling). Sure they could find the leak in the pipe and dig to repair it, but there was also another solution...boring. Boring meant no digging (NO DIGGING!), instead a machine would run a new line to the house under the plants, at least 2 ft down. Since the existing line was something like 65 years old this seemed the obvious answer, it wasn't just about the plants (well, so I tell myself). We scheduled the work, the soonest it could be done was 5 days away, 5 days of no running water. Fun.

The next day the guy showed up to mark the utilities. Seemed like a nice enough fellow, but I've seen how they wield those spray cans, plants don't matter to them. I peeked out the front door and asked "please don't spray the plants"...and he didn't. Look how careful he was... 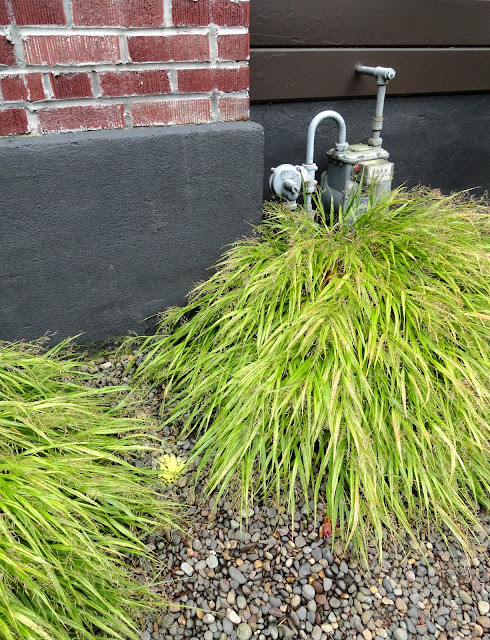 Just a little dot, nothing crazy. 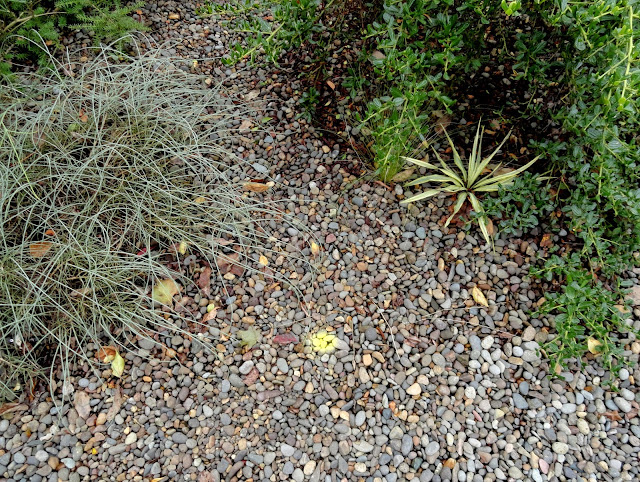 Well, sort of. But at least it's not on the plants! 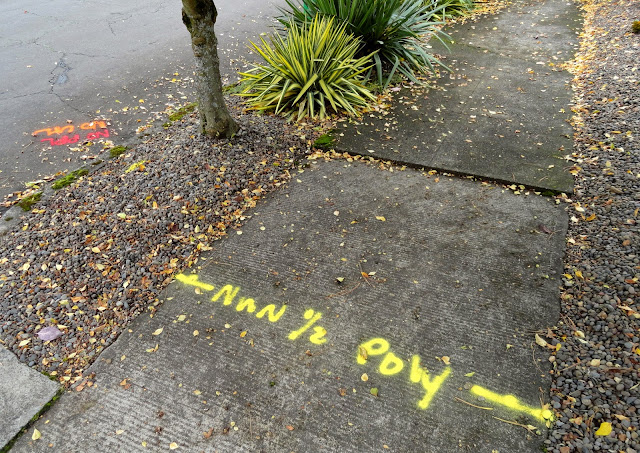 I wonder if he's ever tempted to add an artistic flourish? 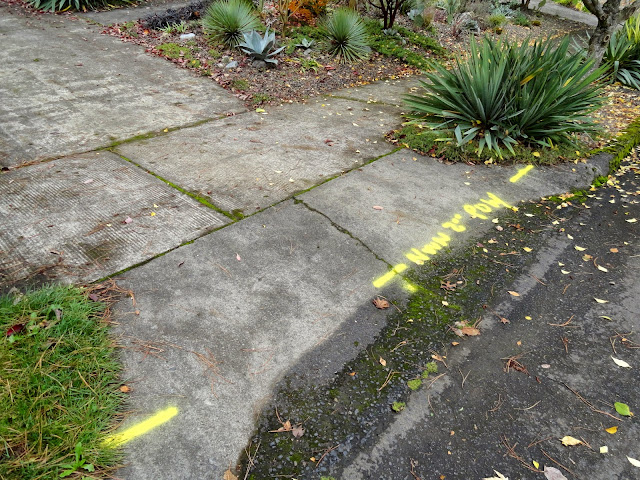 So that was then, next is the big moment. The ditch-witch arrived and boring is underway. 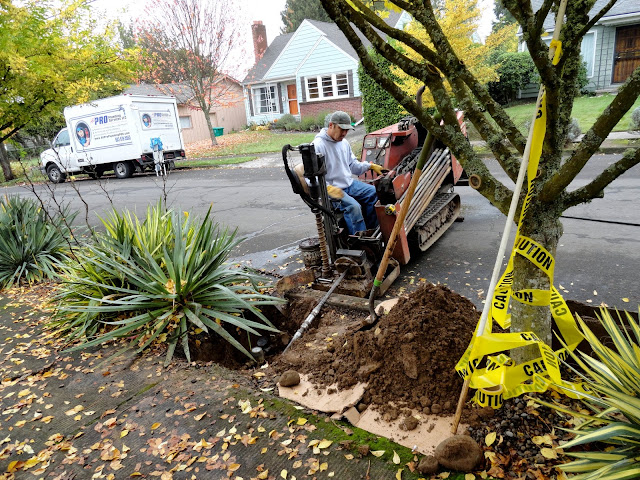 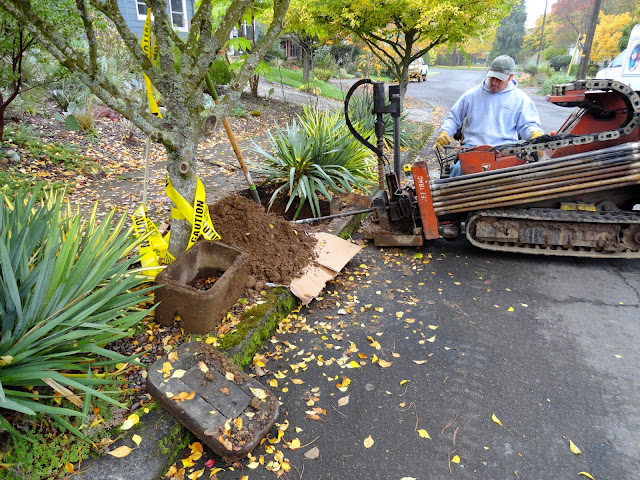 The guy in the blue works for the plumbing company and the guy in the orange came with the ditch-witch. He was following it's path with an ultrasound-like tool you can't see from this angle. They hit rock at one point (not a surprise) and had to go deeper. Oh and he managed to not step on a single plant... 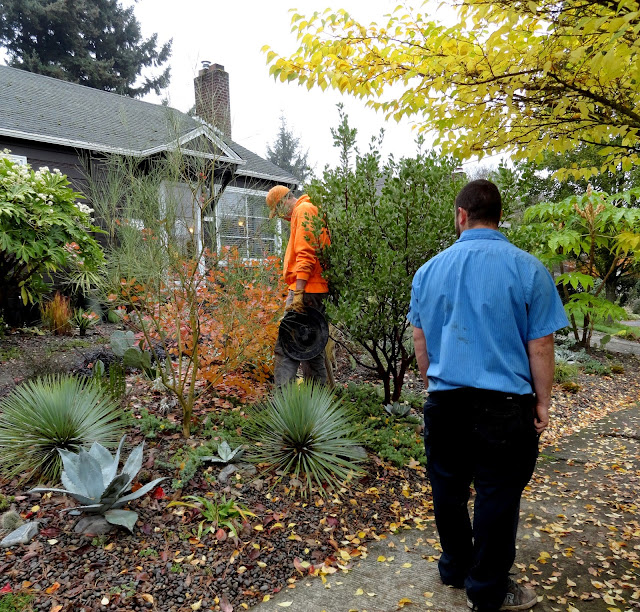 Here's the new service where it busted through the wall in the basement. That's the old service on the right, they capped it off. 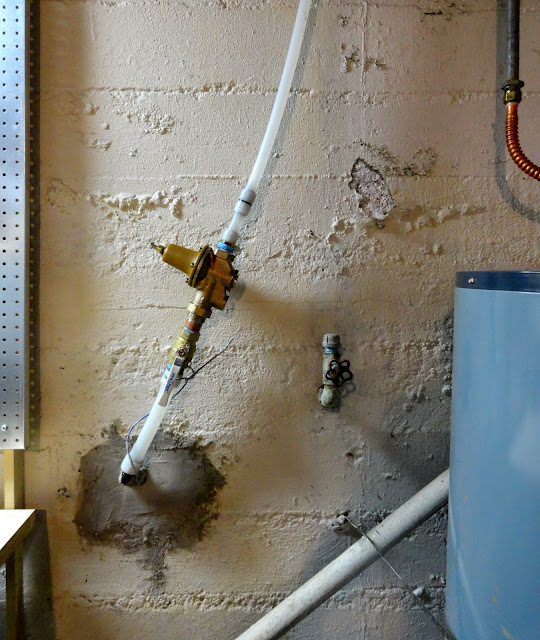 The new pipe takes a jog to the left. 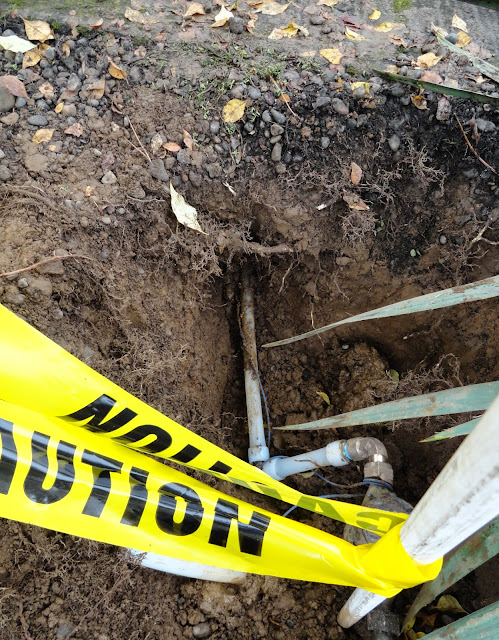 Which according to my eye takes it right under the Arctostaphylos. Fingers crossed it was deep enough to not mess with it's roots. 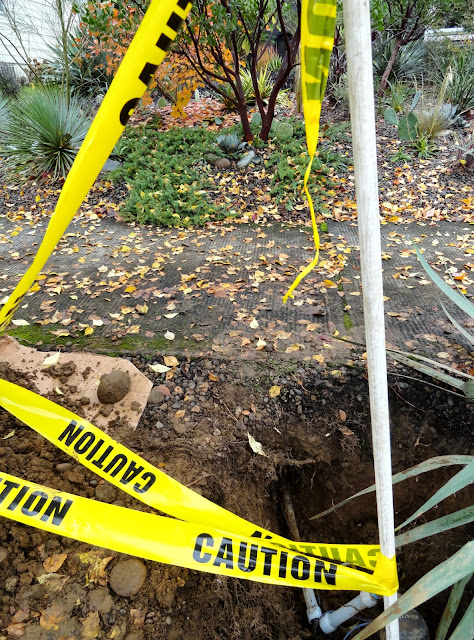 I didn't see any big tree roots in the hole, so I think the styrax (on the right) is okay. As for that yucca on the left, look how untouched it is! Not even a mashed leaf. Disaster, adverted. And we have running water again. And I thank the powers that be that this happened last week, not this week when it's been at freezing with monster winds... 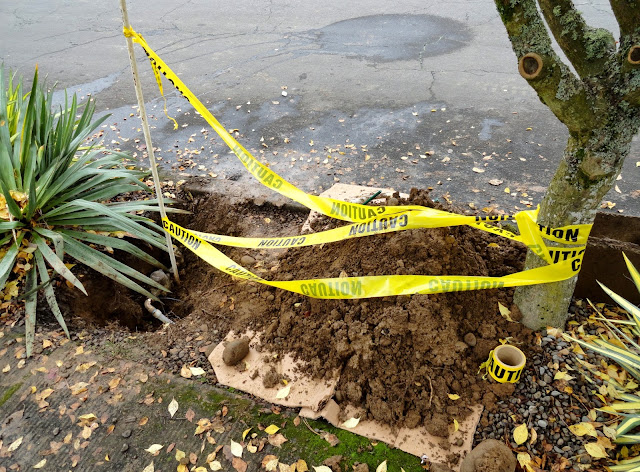