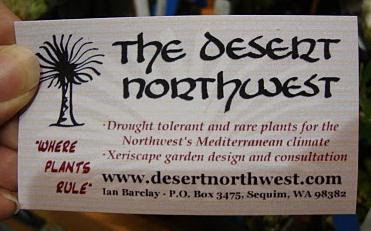 Welcome to week three of Support Your Independent Nursery Month. In week one we visited my neighborhood nursery, Garden Fever. In week two I wrote about the wealth of independent nurseries we have here in Oregon, with a pictorial focus on one of my favorites, Cistus Nursery and their ‘tough love’ parking lot sale. This week is going to be different as I celebrate a nursery I’ve never visited, but through the magic of the ‘world wide web’ (does anyone even use that phrase anymore?) I feel a little like I have.

What if you live in a community without a great local nursery? What if you live in small town in Kentucky with access to only the lame plants available at Walmart and you’re dying to start a Banksia collection? Well thankfully we live in the age of the Internet. How lucky are we? Seriously, sometimes I really do just marvel at how much we have at our fingertips! Is there any better time to be a plant nerd? I think not.

The Desert Northwest a small nursery in Washington, which I’m dying to visit…. I know, seriously! With a name like that how have I not visited already? Well they are tucked away in Sequim, Wa, on the Olympic Peninsula (not exactly a quick trip from Portland, OR). I’m determined to visit in 2012 (yes, I suppose that’s my first New Year’s resolution!) but the great thing is that I don’t have to visit to buy their plants because The Desert Northwest sells plants via mail order… life is good. 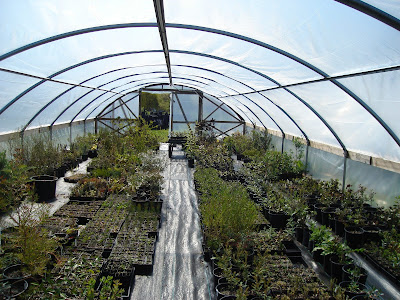 (One of the nursery greenhouses as it looked last May)
To learn more about The Desert Northwest, and the plants they grow, you can read the many informative articles on the website and follow the blog. But for this post I wanted to virtually take you there, difficult to do when I’ve never been there right? Well Ian Barclay, the man behind the nursery, kindly agreed to send a few photos of the nursery and plants, and to answer some pesky questions from yours truly. So it’s almost like visiting!

Can you describe The Desert Northwest?
The Desert Northwest is a production retail and mail-order nursery specializing in fun and water-wise plants for the Pacific Northwest and beyond. Besides plants adapted to our dry summers, deer resistance, coastal wind tolerance and general scarcity also feature strongly in our inventory. We propagate and produce everything we sell on site without the use of chemical fertilizers or pesticides.

How long have you owned/ran The Desert Northwest? Did you always want to open a nursery or did your collection just grow to the point you had to?
I had some ideas in my head off and on since late high school about starting or operating a nursery, but for a long time I tried not to let them escape since it seemed like an unconventional and risky career path that was not what I was looking for. It is also partly the product of an out-of-control plant collection though the focus of the collection has shifted over the years from a lot of tropical and subtropical plants, to anything rare that I happen to like, to the current emphasis on drought tolerant plants, cacti, and succulents.

What did you do before?
I worked at several other retail “nurseries” which might more accurately be called plant stores since they don't actually produce plants, and one organic produce company. I became rather disenchanted with the disconnect between producing plants and selling them to the public that the nursery industry has become. The longest and best nursery job I had was at Bainbridge Gardens. 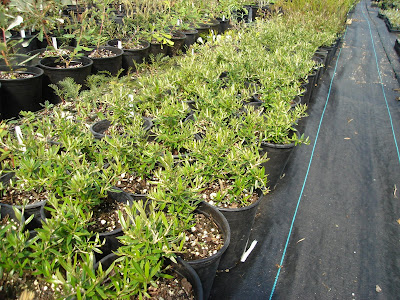 (Grevilleas almost ready for sale at the nursery)
Why Sequim?
We had the nursery in Poulsbo (Washington) for several years in a site that was quite idyllic but rather unsuitable for retail. The opportunity to obtain an ideal parcel of land in Sequim was somewhat serendipitous and we took it. The nursery site has a lot going for it, being pretty much a blank slate when we got it, with well-drained soil, cheap water from the Dungeness River irrigation complex, and the driest climate in western Washington. Also, we have family in Sequim, and anyways who wouldn't want to live in the center of the universe?

What has been the biggest surprise (or toughest challenge) in running a nursery?
The toughest challenge is to maintain a healthy and balanced lifestyle when there is so much nursery work to be done and I (mostly) enjoy doing it. It's easy to get carried away with something you are passionate about if you are not careful. 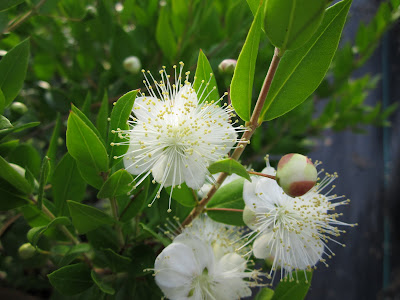 (Myrtus communis (myrtle) flowers)
In these tough economic times how do you see your customer base changing?
My customer base is getting difficult to identify, but I believe an even stronger push by us to get our message out about water-wise gardening and related topics, as well as continuing to expand our range of drought-tolerant ornamental plants, will help us to reach a broader range of people as society becomes increasingly interested in water conservation and gardening with practicality in mind.

Where (besides at the nursery) will you be selling your plants in 2012?
We try to do six or seven regional plant sales per year. Every year we try a couple new ones and usually drop a couple as well. In 2012 we will for sure be at the Sequim Garden Show, which is the third weekend in March. This is a really fun sale with wonderful hosts and friends. We are also pretty confident we will be at the Bloedel Reserve sale and Rhododendron Species sales, both in April; the Secret Gardens of Lake Forest Park sale in June, and the Fronderosa Frolic the second weekend of August, and probably a couple others. We might try to get into the HPSO spring sale in Portland although I haven't actually contacted them yet. 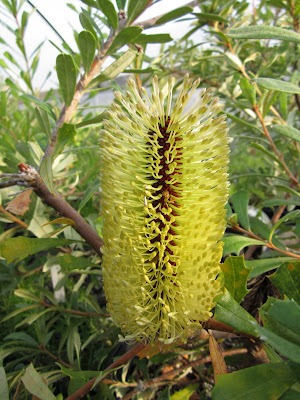 (Banksia canei, one of the hardiest Banksias)
What plans do you have for the future of the nursery?
Thus far we have two large greenhouses packed full of cool plants, and an outdoor growing area. We have been building one new greenhouse per year, and hope to continue what you might call a gradual and calculated expansion over many years until most of the property is converted to either nursery or garden (since there are no undisturbed areas left anyway). The garden will be sectioned off into “zones” with a large area receiving no water for plants once established, another large section receiving only occasional water and a smaller section that receives regular water. Of course it will be full of rare and exciting plants including an extensive hardy cactus and succulent garden and (someday) at least two greenhouses with in-ground beds for really exotic fare. As far as operations go, along with our continuation of mail-order business and opening by appointment, we hope to be open for regular retail hours probably one day per week somewhere down the road (2013?). We also have a limited wholesale market that we hope to continue to develop and maintain. We think it seems too early on to make any specific plans beyond our current location.

Do you have a personal garden or is the nursery your garden?
I am certainly not one of those “nursery is my garden” people as I believe there is really no substitute for a garden and for watching how plants do in the ground over a period of time. At the moment though we still haven't planted a whole lot in the ground here since the nursery takes precedence and time is limited. Just this fall we have started planting more goodies out and hopefully will have something that looks like a baby display garden within the next year or two. 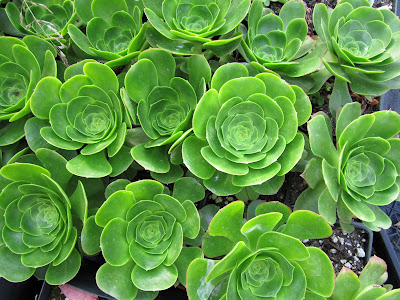 (Aeonium arboreum, not hardy but fun to grow)
How many/what agaves in the ground in your garden?
We have not put together any in-ground succulent beds yet. But we will – oh, yes, we will. I think about 25-30 Agave species might be worth attempting here.

What do you feel is the most undervalued plant at the nursery?
Broadly speaking I would say the evergreen oaks are a vastly under-appreciated group – hardy, versatile, and always beautiful. We have many of them in production although not a lot of them are on our current list. Two of my favorites are Q. oblongifolia and Q. hypoleucoides.

Do you do a lot of plant hunting?
I used to do more, including a couple of big trips to the Southwest, back when I had more time and gas cost a lot less. More recently I have been focused on less exotic yet surprisingly interesting destinations such as southwest Oregon and our very own Olympic Peninsula with an impressive diversity of flora in the drier parts. This fall we had a great trip to Chelan County, Washington, which has many wonderful dryland plants, and we will be exploring Skamania and Klickitat Counties, and the Mt. Hood area of Oregon before winter. I'll be posting reports of both trips on the Desert Northwest web site soon. 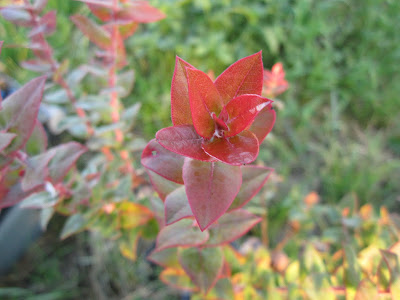 (Arctostaphylos pajaroensis 'Brett's Beauty'
should have plenty of these for sale next year)
You can stay in contact with Ian and the Desert Northwest by signing up for their email list (newsletter@desertnorthwest.com) or following them on Facebook (I hear that Facebook thing is really taking off, I might have to check it out myself someday)...thank you Ian for taking the time to share your nursery!