Sounds like a new type of Agave right? It’s not; it’s actually a physiological condition. I’ll explain more in a minute. First how I came to learn of Agave edema, on the San Marcos Growers website…

I’ve raved about the San Marcos Growers website many times, as well as gushed about my visit to the nursery. Their website is so packed full of useful information that I am always discovering something new, for example their Agave Page. Wow! So much Agave info all in one spot! I still haven’t managed to read it all but I am enjoying working my way through it.

It’s on this page that I learned about Agave edema. One of their pictures (below, borrowed from the San Marcos Growers website, followed by a picture of my Agave montana) caught my eye. The yellow/brown area on this agave leaf looks very similar to the patterns that have developed on my Agave montana ‘Baccarat.’ 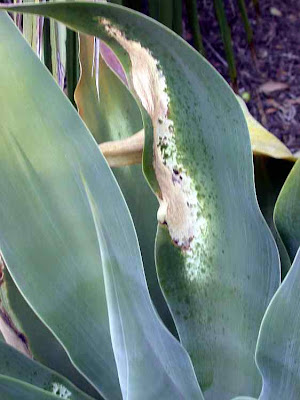 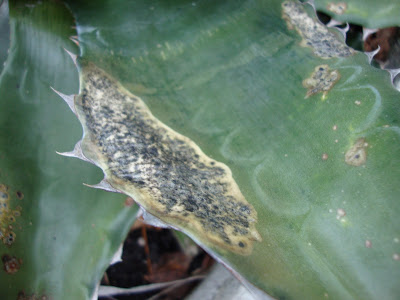 I’ve been upset about these splotches and fairly confident their existence was somehow tied to the fact I was unable to get to the garden and uncover this agave when our cold snap was over. This same plant weathered similar freezing weather last year with no problem; the only difference being I was able-bodied then and gave it plenty of attention (covers off and on as the weather dictated). This year it remained covered for a week and a half. 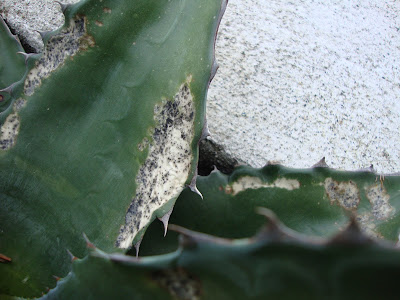 Edema occurs when the roots of the plant are absorbing moisture from the soil but the leaves stomata are closed (due to the weather conditions and the plant being covered reducing photosynthesis) and the plant is unable to transpire at the normal rate. The internal water pressure builds up to the point that the bottom of the leaf surface ruptures and creates “water-soaked blisters” these lesions then turn into the yellow/brown “scab-like” areas. 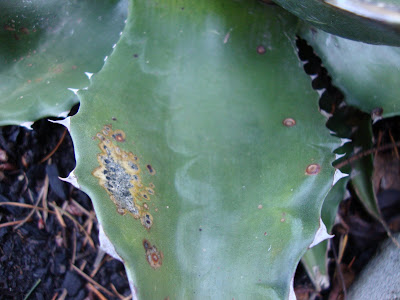 From the San Marcos folks…”We likely compounded the situation by covering our crops of Agave 'Joe Hoak' with frost protection cloth (Agryl fabric) the nights after the rain because of frosts warning associated with the tail end of the storm. This would have trapped moisture around the plants and also limited transpiration the following day when the plants were left covered.” (San Marcos)

Santa Barbara's Pest Control Advisor Robert Muraoka wrote an article on this phenomenon… “The symptoms begin as small water soaked blisters which continue to swell, burst, collapse and then turn tan or brown in color. This is not a fatal disease but the damage is unsightly. Although the blemishes on the leaves are permanent, new foliage will be free of the disease, unless the same environmental conditions that caused the disorder are repeated.” 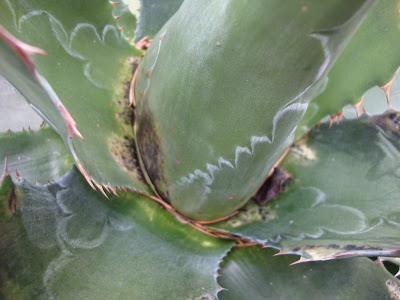 Even though it looks pretty bad my agave is not mushy; all the leaves and the center “cone” are quite solid. I am going to try to take Mr. Muraoka’s advice and leave it alone hoping that it pulls through. Patience! 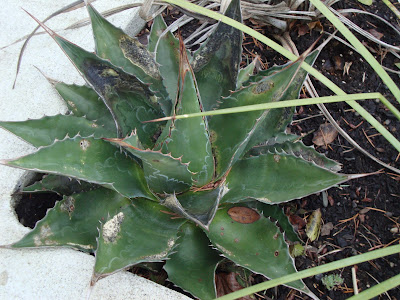