The lady and the agave

Andrew tells me that vintage photos of agaves are extremely hard to come by. There are lots of cactus, houseplants, botanic gardens. Search for agaves though and the selection is narrowed. This one came to be mine on my last birthday (see prior plant focused photos he's given me be searching the label photo quickie). I love her expression, it looks like she's smiling at the agave, rather than the photographer. 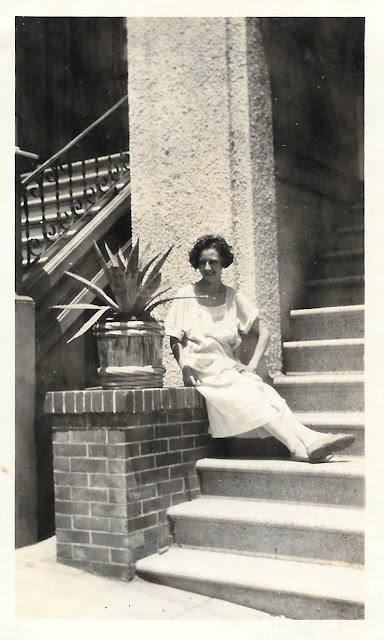 Is the agave hers? Or did she sit down on the steps to pose as they were passing by? Where was the photo taken? The steps (especially those to the left in the background) have me thinking of NYC, but really it could be a shot from any urban area. The container is unusual*, and there's no date. Anything offer up clues to you?
* I received an email from Roger Gossler who tells me that container is a soy tub, his family had them in the early 1960's, he assumes they came from Japan via San Francisco where his dad found them.
—   —   —
All material © 2009-2022 by Loree L Bohl for danger garden. Unauthorized reproduction prohibited and just plain rude.