Monte, the making of a local agave celebrity

Picking back up where I left off yesterday, this is Monte, Lance Wright's Agave montana. I took this photo on September 7th, 2019. 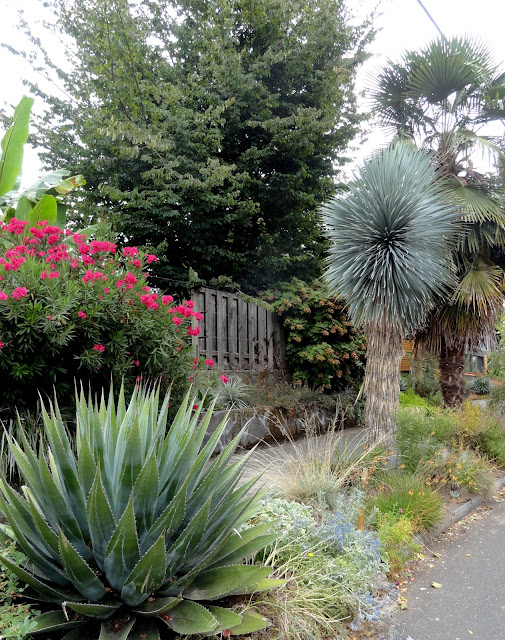 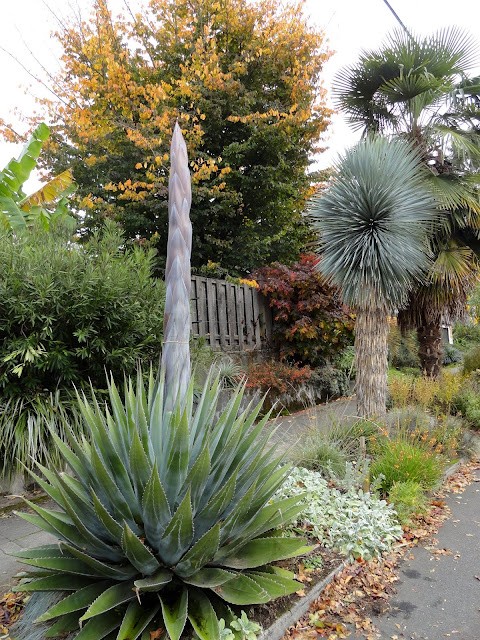 We all wondered, what would an agave pushing out a bloomspike do as we headed into a Pacific Northwest winter? Not exactly ideal time for an agave to bloom. Well the answer is it will hit pause for a few months and then start right up again. I took this photo on April 25th, 2020. 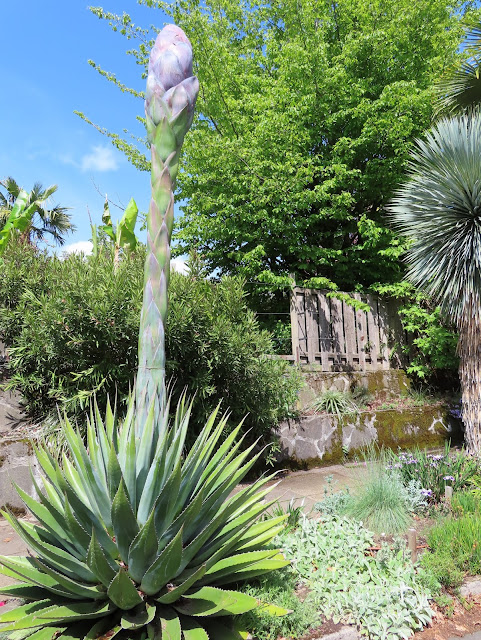 If you look closely at the October photos you can see a string Lance tied around the stalk a few inches above the tallest leaves, see it below? Now page up and you can see the same string, in the same place. The amount of the spike above the string is how much it's grown. The string stays in basically the same spot. 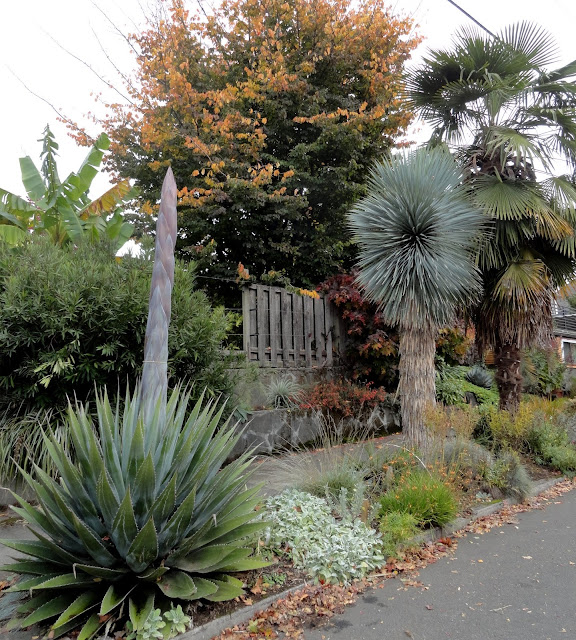 Other than the fact there was a giant spear growing out of it, the base of the plant didn't really look that different. 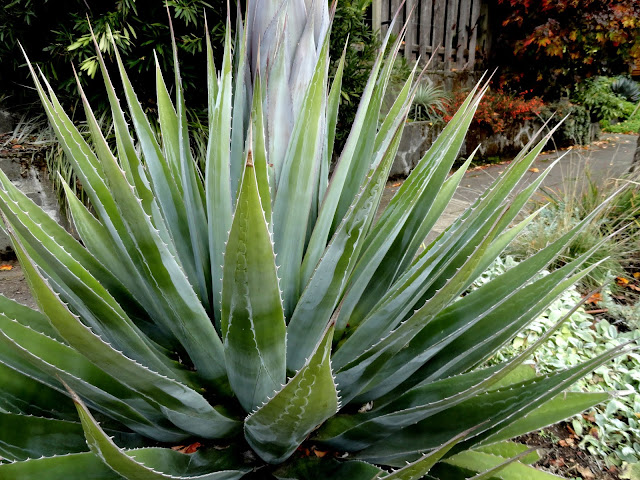 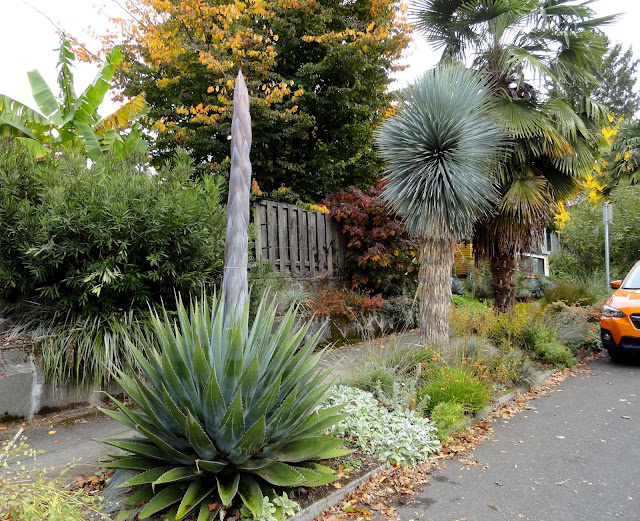 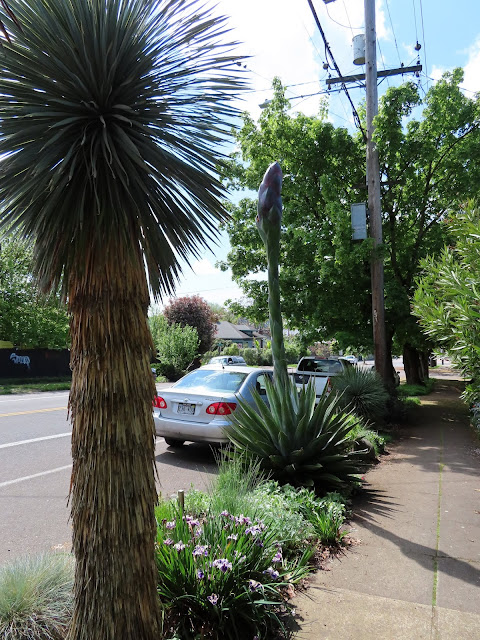 There's just no way for this photo to not look a little cartoonish, a little Photoshopped. 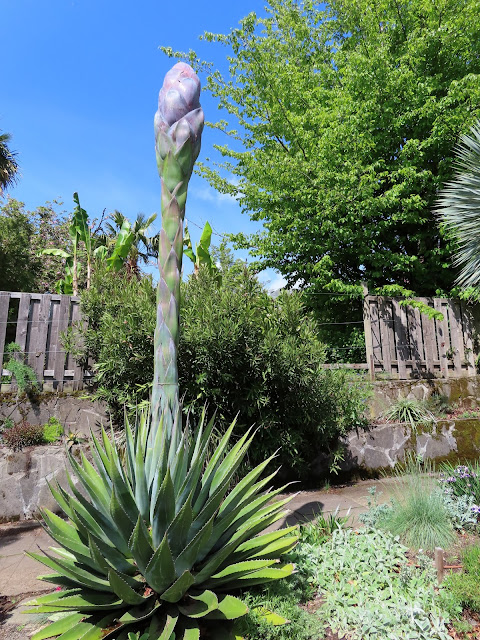 The leaves look a little yellower now, which makes sense because all the energy is going into the bloom and the plant is going to die. 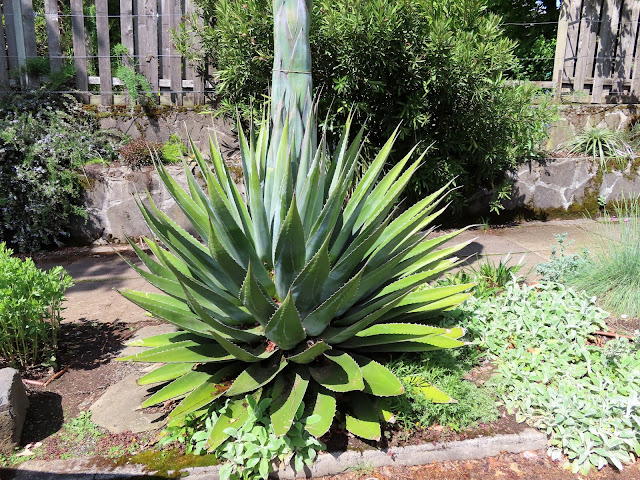 Ever the educator (that's a compliment) Lance hung an information sheet for those passing by who are unfamiliar with agaves and their life cycle. 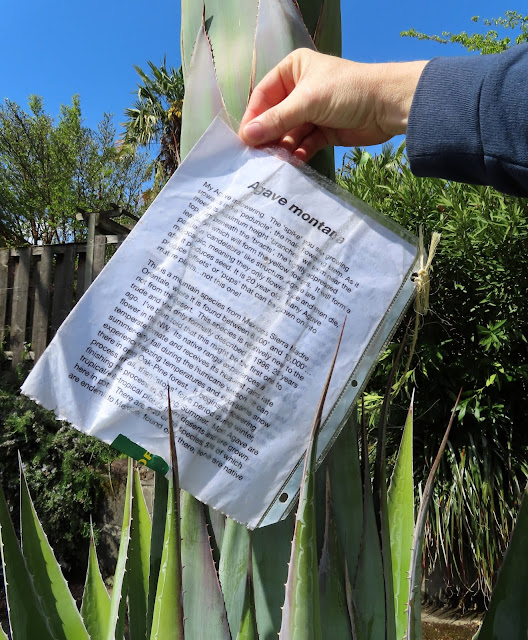 Since I took these photos the flower buds have started to emerge, and the blooms are getting ready to open. 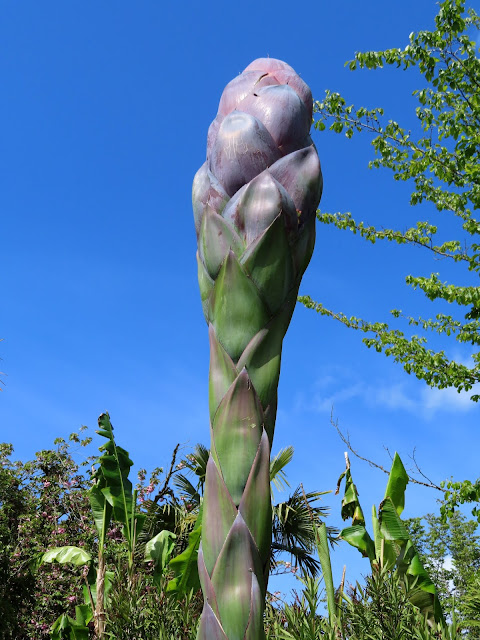 No more strange fist in the sky... 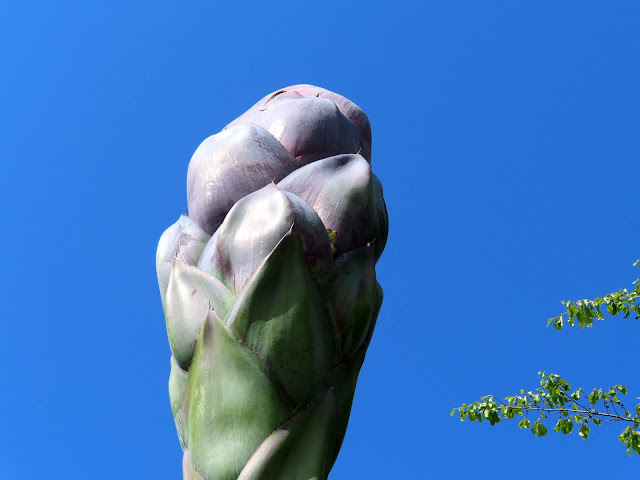 Here's 6ft 2in Andrew for scale, and he's even at street level so giving Monte an unfair advantage, note he's also protecting Monte from Covid-19 germs. 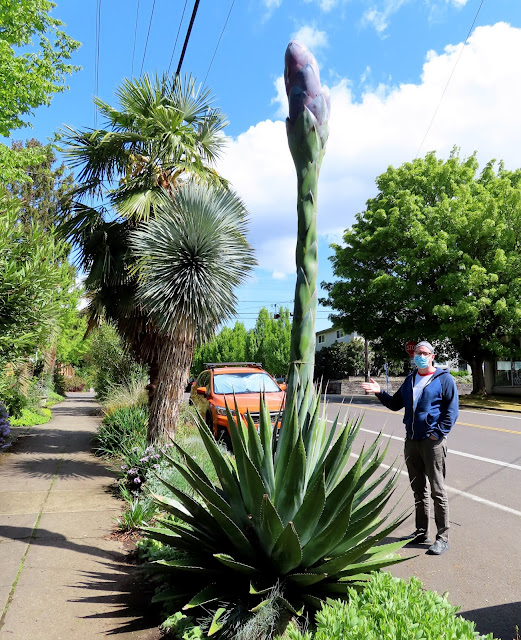 When we were there we were the only visitors. It's not that way any longer, Monte's local celebrity status has skyrocketed and throngs of people visit daily, in fact Lance is now asking that people stay away as the crowd is getting out of hand. People are stepping on plants, not observing social distancing policies and even trying to get into his private back garden... 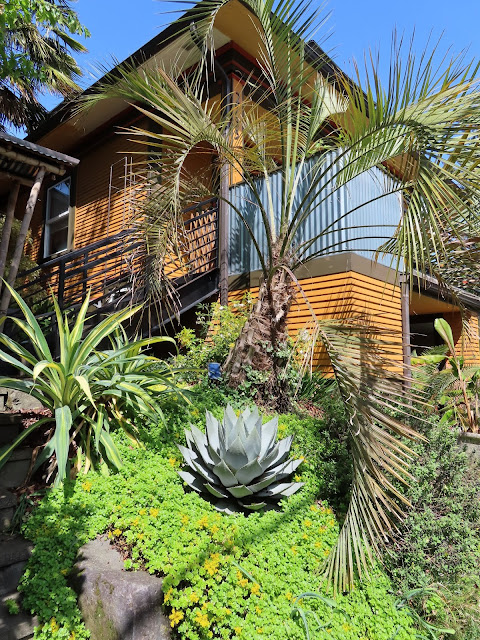 I get it, these are exciting times for those who love plants (and agaves!) but people need to remember it's also a stressful time for us all. Nerves are on edge.

Lance's Echium wildpretii are busting out in bloom, mine is still only thinking about it. 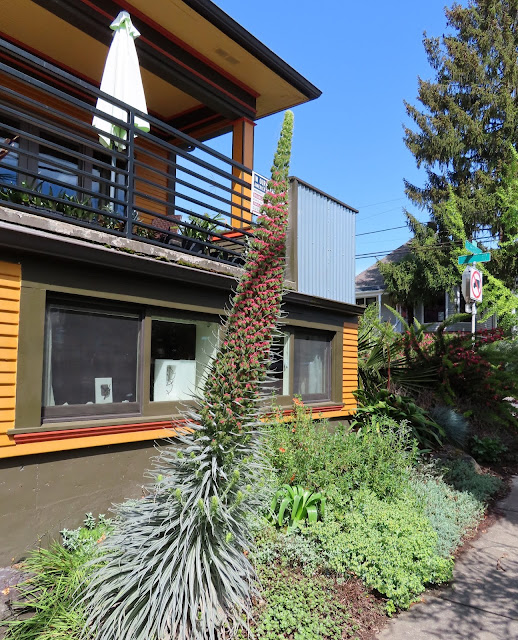 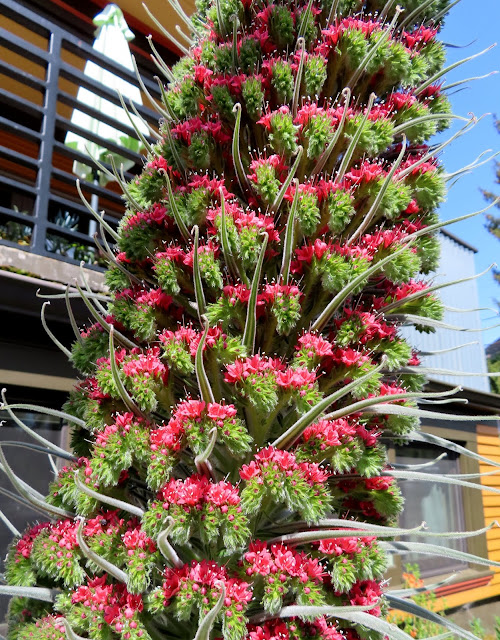 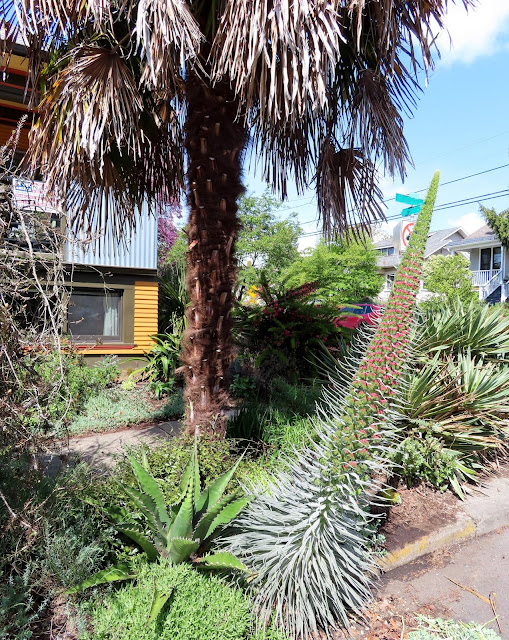 And there's Lance up on his deck. 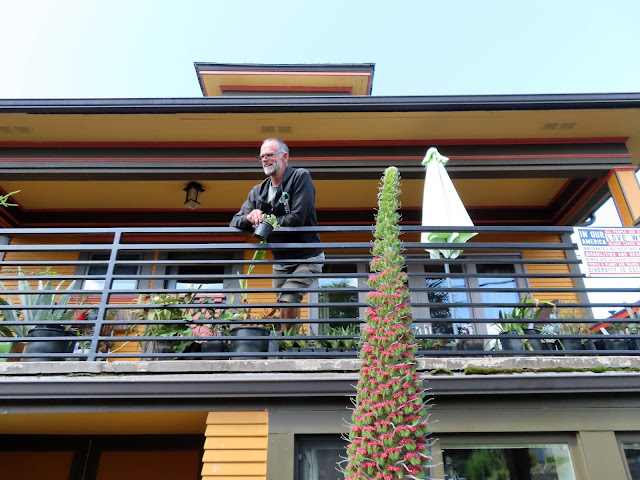 Oh and his Grevillea x juniperina 'Pink Pearl' is still blooming. I imagine it hasn't stopped all year... 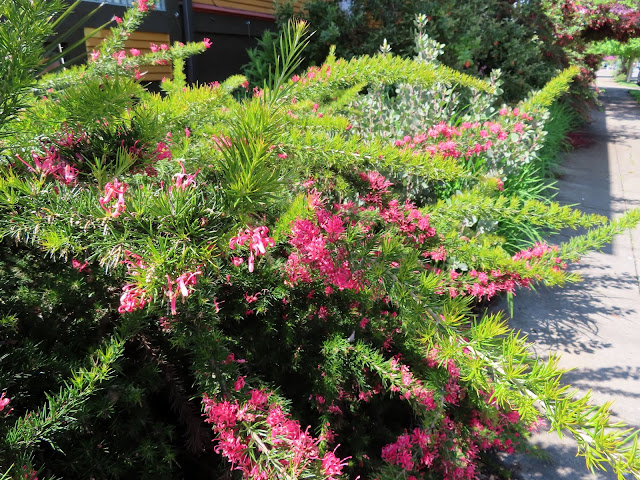