I first grew Echium wildpretii—a tender biennial from the Canary Islands—in 2010. That experiment ended poorly. The beautiful silver foliage rosette became a pile of mushy goo after a hard winter freeze, dead before it had a chance to bloom. I was however hooked on the foliage, and ever since I've been doing the Echium dance. Planting and hoping for a mild winter so I'd get blooms—that first happened in 2012—and replanting again if winter wiped them out. After all the foliage really is reason enough to grow this plant. 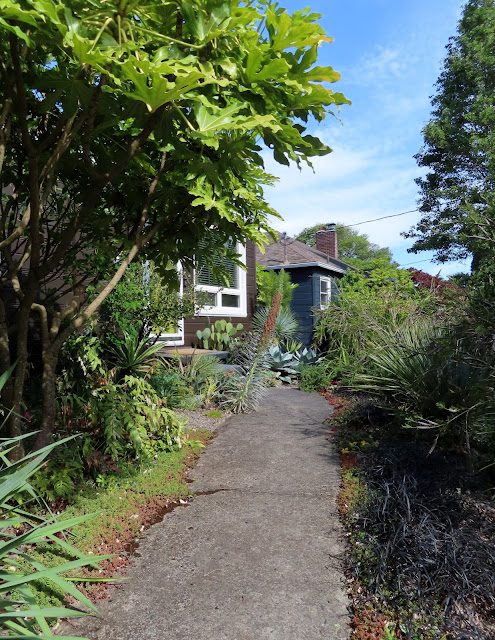 Since I currently have both blooms and non-blooming foliage rosettes, I thought it would be a good time to take a look at what this plant brings to the garden. As I mentioned above it's a biennial, blooming in it's second spring/summer in the ground. At least that's the way it's supposed to happen. 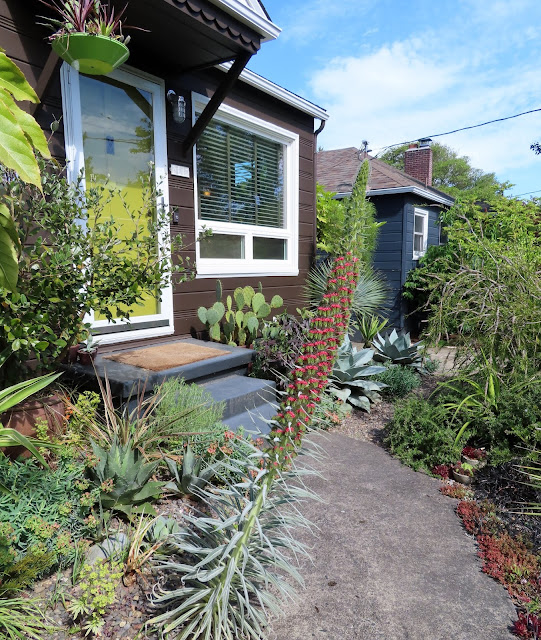 I have six plants, they're all seedlings I dug from a friend's garden. His plant bloomed, and the next year seedlings were coming up all over the place. So six plants, all the same age, from the same mama plant—but—only 3 of them are blooming. It get's stranger, this is their third year. Biennials are supposed to bloom in their second year. Does that make the three that are blooming triennials? And the three that are not, what are they? 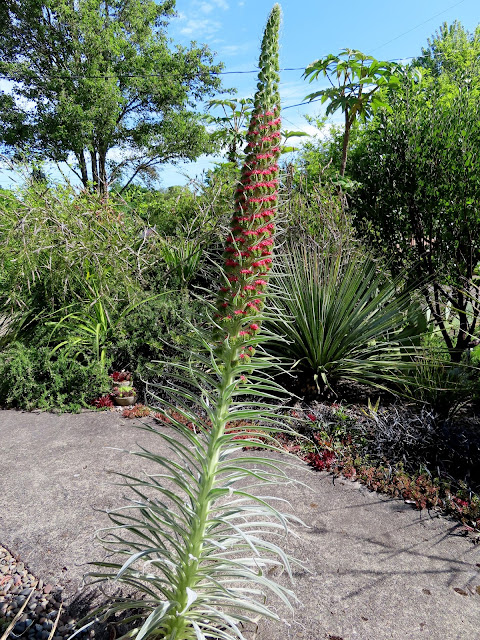 Interesting, right? Anyway, all the photos thus far are of the same plant, growing along the sidewalk to our front door. Since the tilt of the sidewalk means winter rain (mostly) runs away from this plant, while the cement provides a little extra warmth, I figured it had a pretty good chance of overwintering. 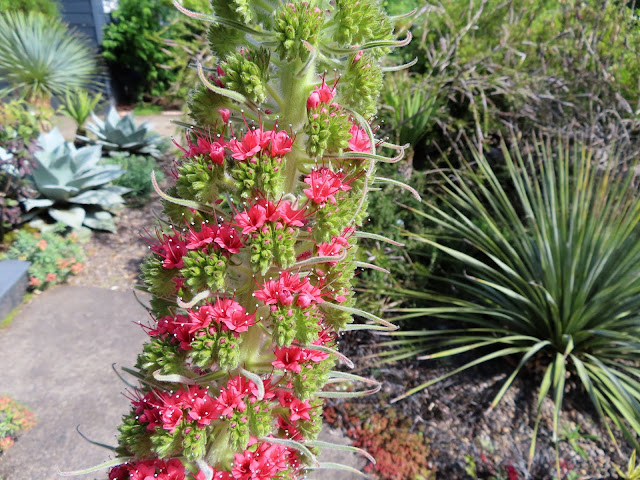 The other front garden plant is at the tip of that orange arrow. 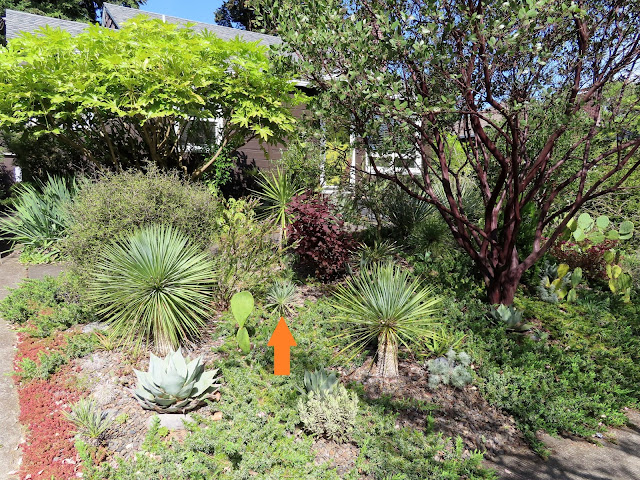 It's always been a bit of a runt, so I guess I'm not surprised it's still small and not blooming. I really need to be sure to give it more water this summer. 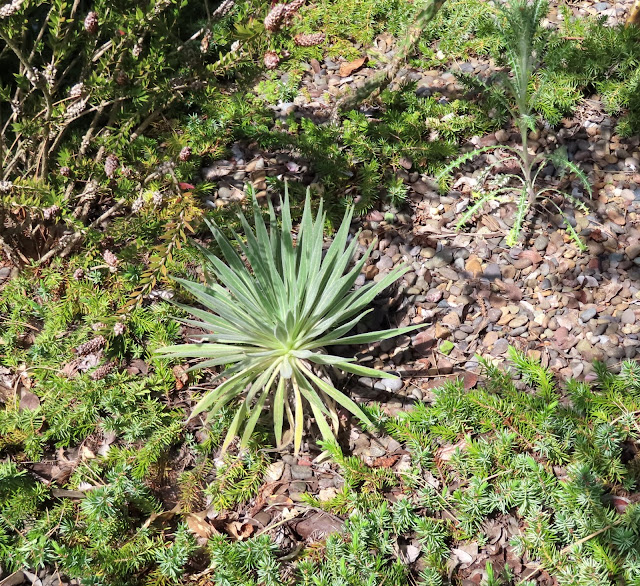 Now we're in the back garden and this next plant is anything but a runt. It's always been the largest and best looking of the bunch. Earlier this spring I thought it might be fixing to bloom, as it elongated. 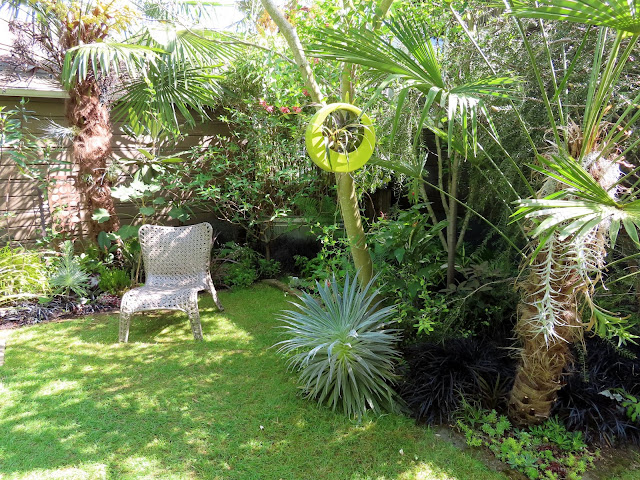 But the center stayed flat, no growing tip evident. 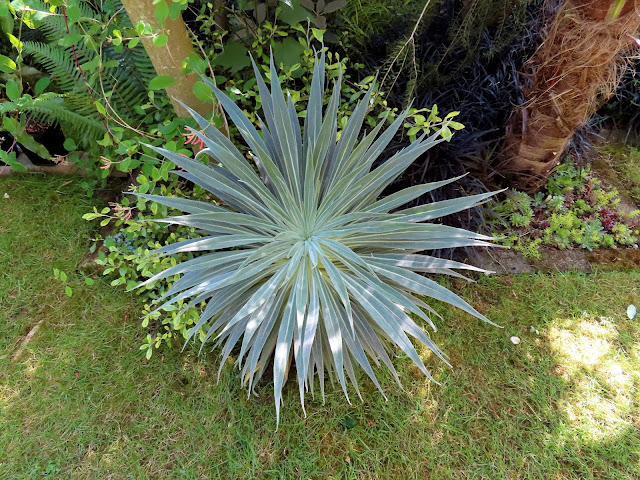 I'm not complaining as I love this plant and I'm thrilled it wants to stick around for another year, or at least another summer. 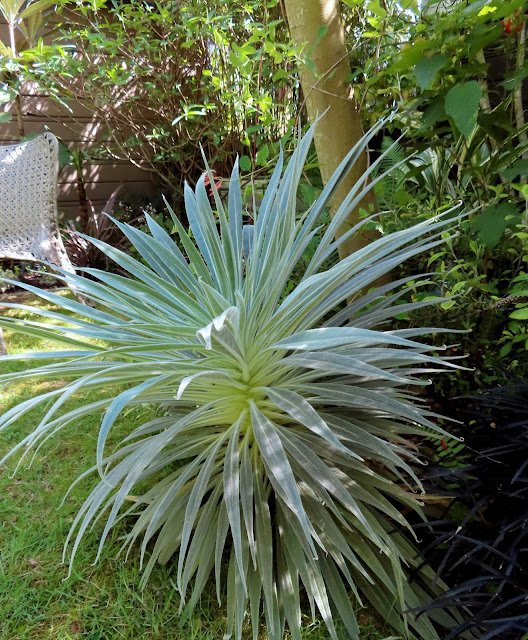 This guy! He'd been living in container for two years and I just put him in the ground when I planted-up this area late in April. He was flat as a pancake when I planted him, but doing so seemed to have changed things, because he quickly began to grow. He's got a lot of ground to catch up on as far as the other two plants that are currently in bloom, but it's obvious he's headed in that direction. 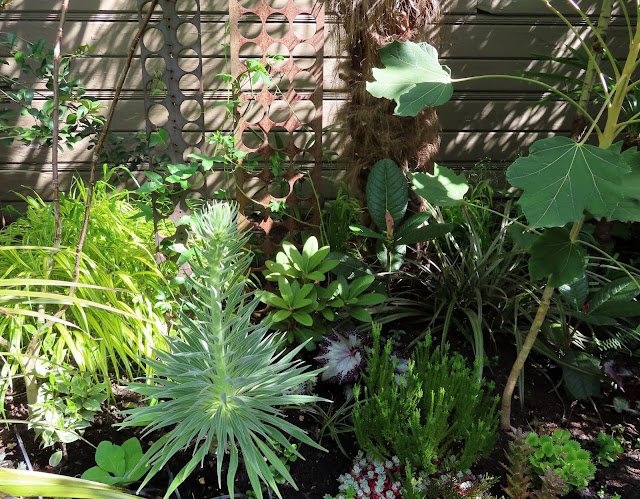 Here's the other blooming plant. I'd hoped the blue Ceanothus 'Dark Star' flowers (on the left) would stick around to provide a counterpoint to the pink and I got lucky. 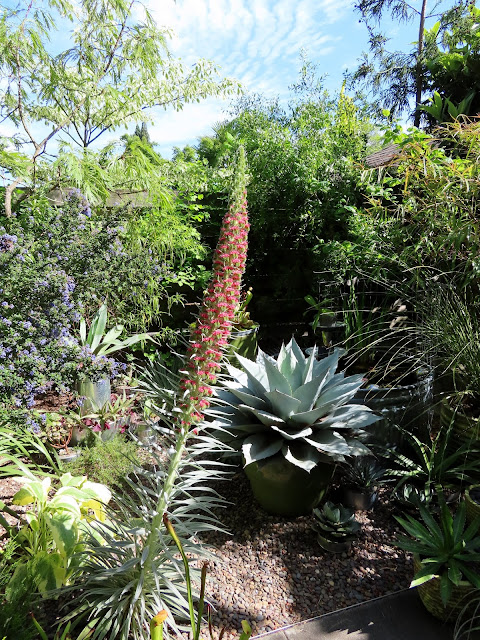 This corner of the garden is buzzing with all sorts of happy pollinators and giddy hummingbirds. 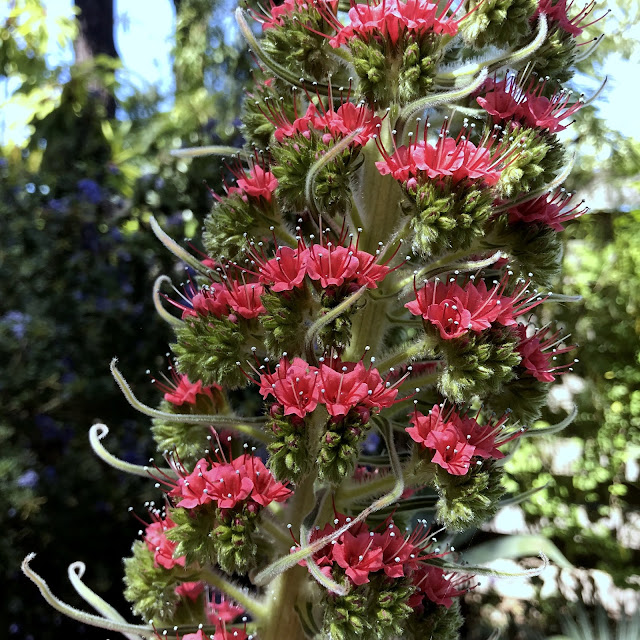 The sixth and final Echium wildpretii in the garden is visible just to the left of the large Agave ovatifolia 'Frosty Blue'. 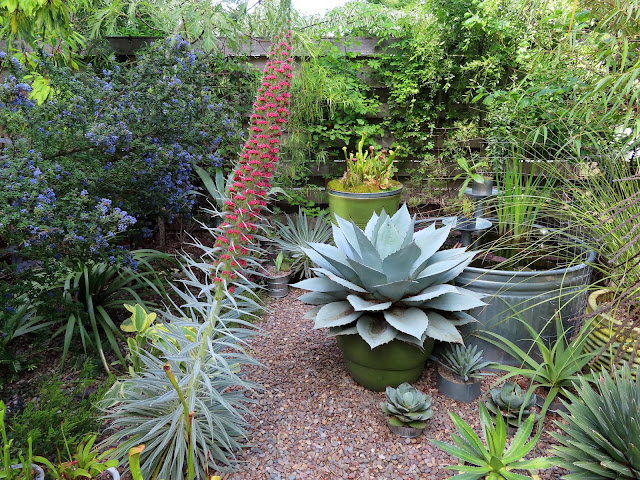 I'd positioned it so I could walk between it and the large green container, but the darn plant grew a hefty trunk and then sort of flopped to the right. 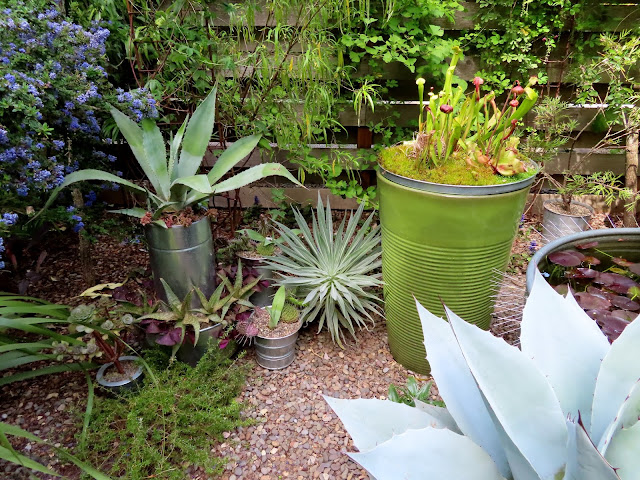 It's going to be interesting when it decides to bloom (see I'm assuming a mild winter...who knows what the future holds though?). 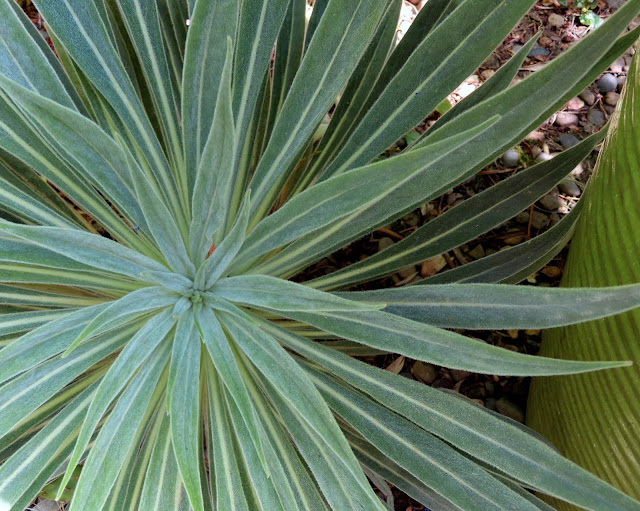 With three plants blooming, that means there are going to be some mid-summer holes in the garden after the plants finish blooming and die, right? Not so fast! It just so happens Xera Plants had Echium wildpretti on their availability list last week, so I've got replacements waiting in the wings! 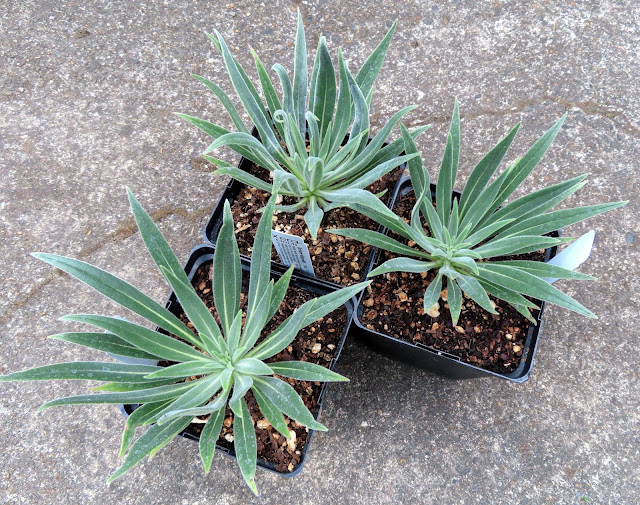 Once these go in the ground I'll be ready with frost cloth and a cover should ice, snow and/or extreme cold come our way. I didn't have to protect my plants at all last winter, but the winter before I covered them at night and uncovered them during the day for at least a week. Leaving them covered would have meant rot, it was important to provide good air circulation during the day.

I was surprised to see Xera is listing these as a Zone 8 plant, I've only ever seen it referred to as Zone 9. Either way it's not a sure thing here in Portland, but it's a gamble I'm willing to make, year after year after year... 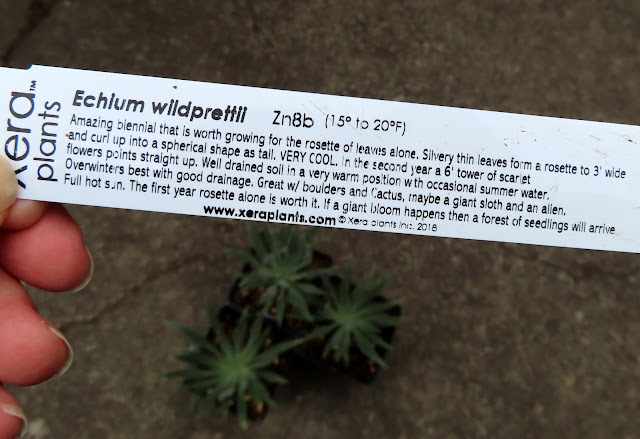 Wanna learn more? Longwood Gardens put together a nice page: Bold and Beautiful: The Life of Echium Wildpretii. There are lots of great photos of plants at the garden and also plants in the wild.