I skipped going on this afternoon walk with Andrew, content to stay home and work in the garden. I asked that he take photos of interesting things he saw, knowing there wasn't much of a chance, he marches, I scan. But what do you know? I got a photo of George... 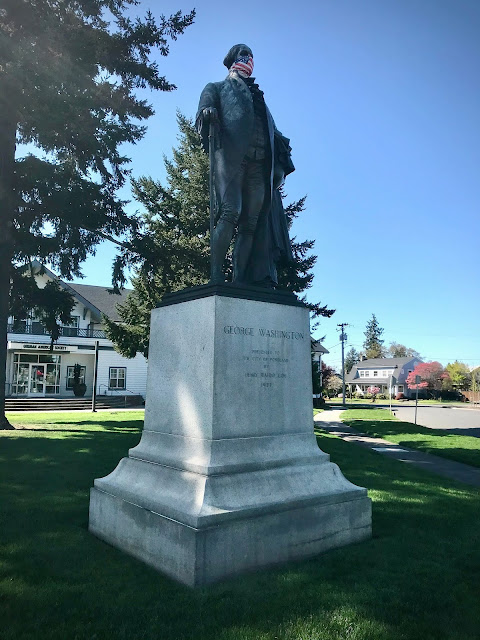 Of course the noteworthy bit is that George is sporting a flag mask, would you expect anything less? The inscription reads—Presented to the City of Portland by Henry Waldo Coe, 1927. 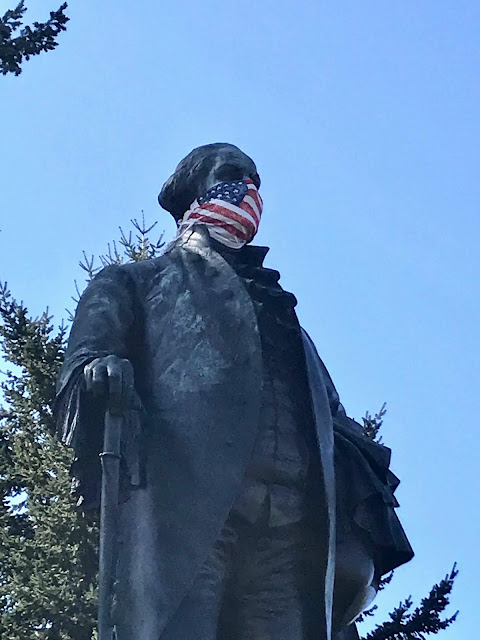 Knowing nothing about this Coe fellow I did a little digging. Via Oregon Digital I found this: "Dr. Coe, who specialized in mental health, is best known today (architecturally) as the individual who moved the Massachusetts Building from the Lewis & Clark fair to the Mt. Tabor area to create a sanatorium. It eventually became a private residence. He is also remembered as the philanthropist who gave to the city four expensive statues: Theodore Roosevelt and Abraham Lincoln in the Park Blocks, Joan of Arc in Laurelhurst, and George Washington in the Rose City Park neighborhood. The house, described in contemporary news accounts as one of the most beautiful and costly in the Portland ["the house" is actually the subject of the article, photo here], was reported to be a gift from the doctor to his wife on the occasion of their 25th wedding anniversary. Six years later, Dr. Coe won a divorce settlement from his wife on the grounds that she was cruel and inhumane. His wife, Viola Coe, was also a doctor, and a leader of Oregon’s suffragist movement and other social causes. The home is now the site of Lovejoy Medical Center."