December's Bloomday always sneaks up on me. The weather outside is frightful, and being inside is so delightful, thus I must admit the garden's blooms are not on my mind. But, one must document, so I grab the camera and head outside... 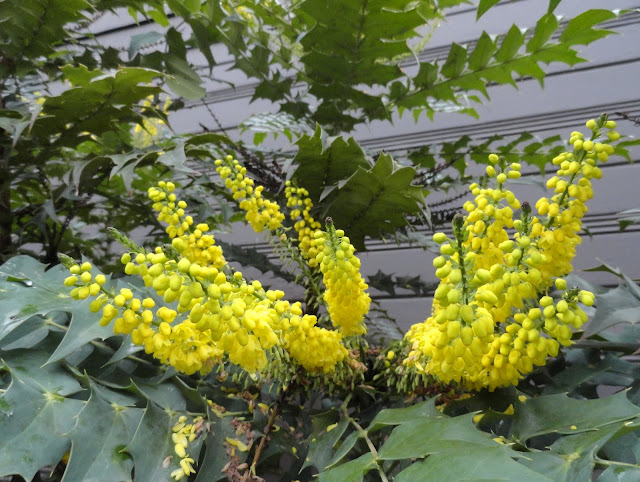 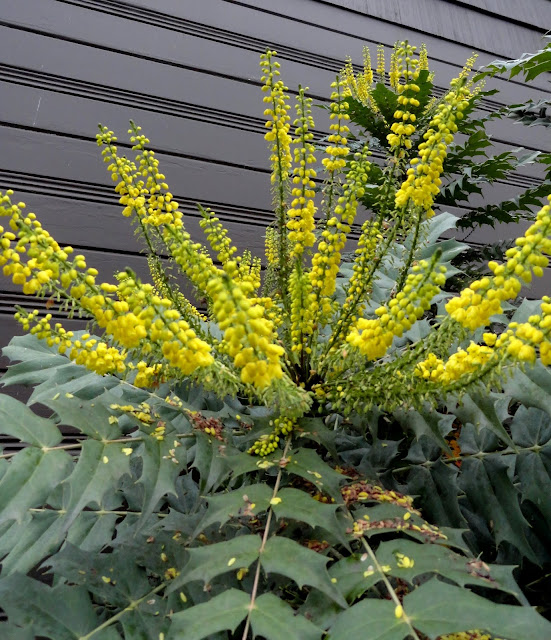 I was surprised to learn my two Mahonia x media 'Marvel' are going to bloom for the first time. Sorry the photo is blurry, the wind was fierce.

Arctostaphylos x ‘Austin Griffiths' is starting to open, much to the delight of the garden's hummingbirds. 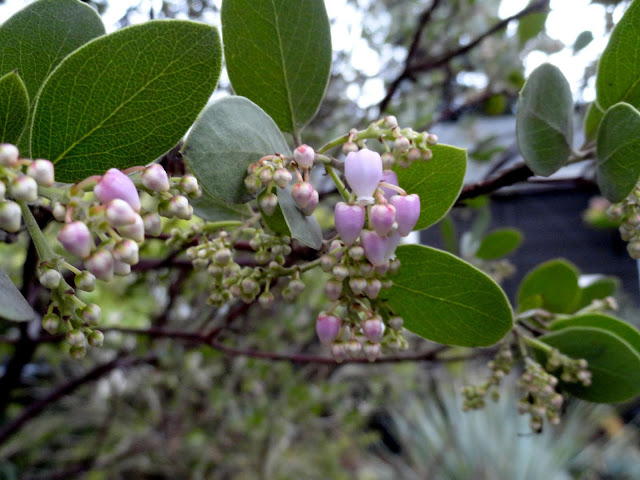 Fatsia japonica blooms are another favorite with any birds, and any buzzing creatures, which still may be out and about. 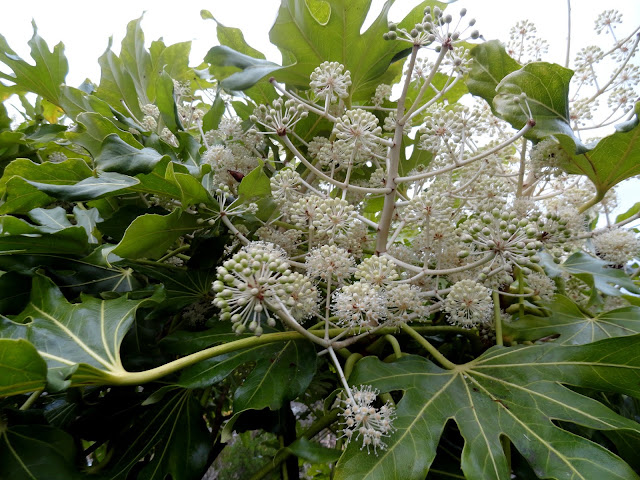 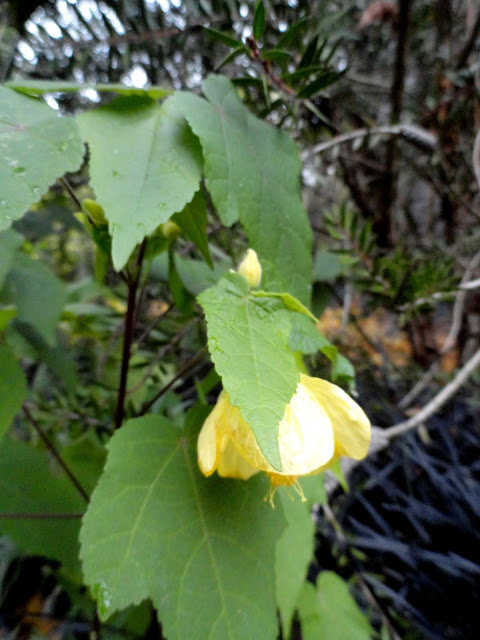 And Abutilon Nuatang couldn't care less what the temperatures are. 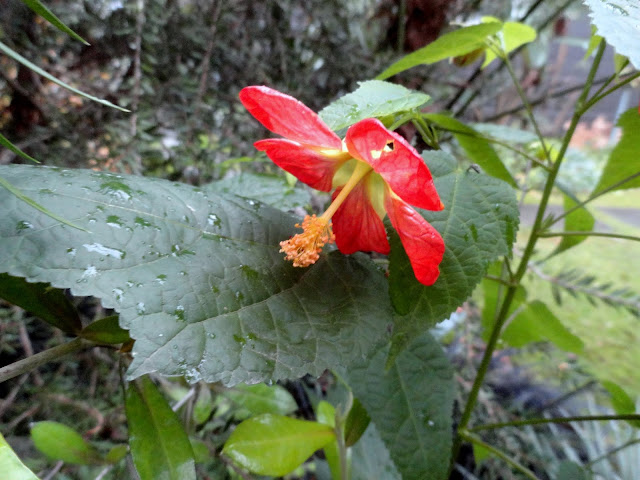 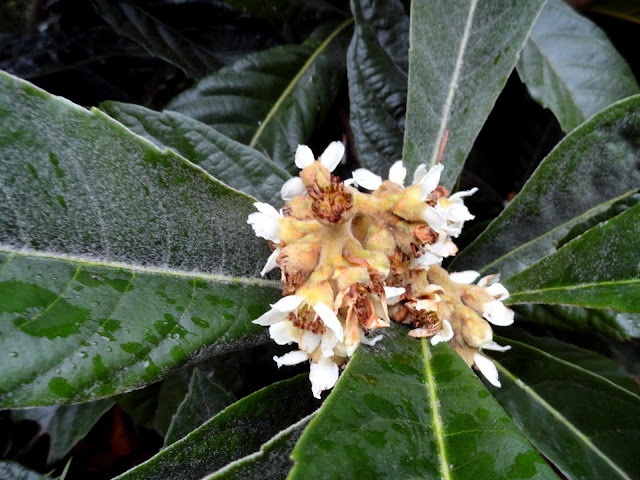 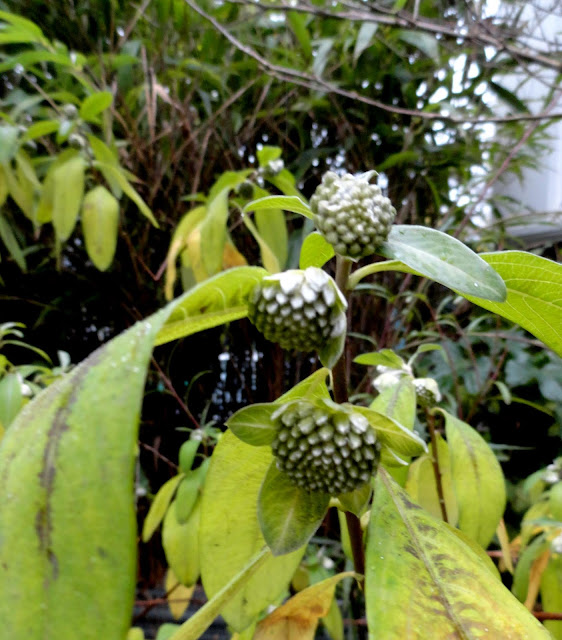 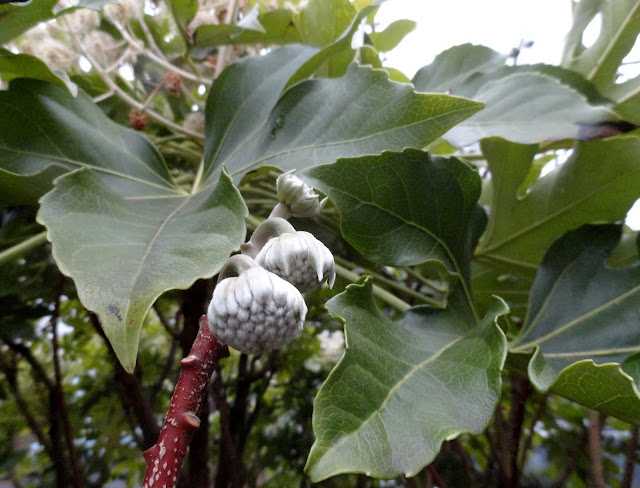 Although oddly it's kept some of its old blooms. I see the hummingbirds attack them with extreme interest so I wonder if there isn't something valuable within all that fuzz. 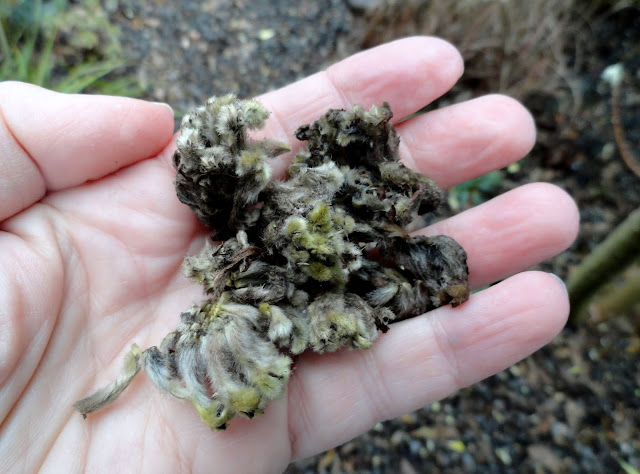 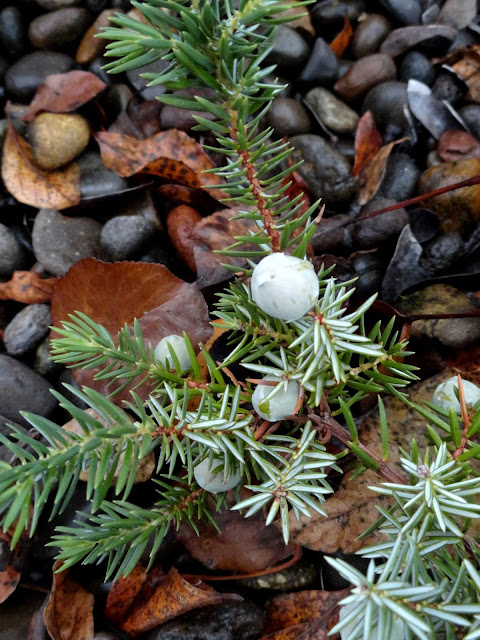 Most of the outlying areas and many places in the city have experienced a frost, if not a hard freeze. Not here in my garden. The Tetrapanax papyrifer buds still show promise. 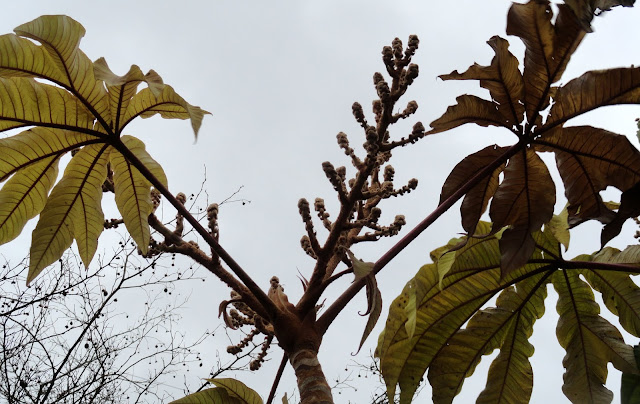 I've picked up a few pieces that the wind has broken off, they're starting to open, but I'm not holding my breath for full on bloom. 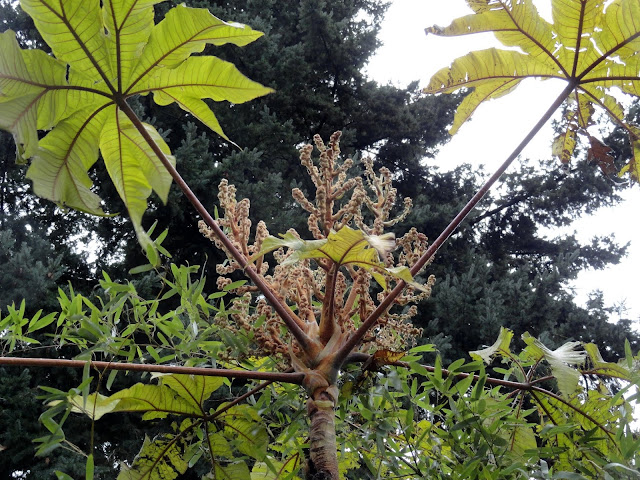 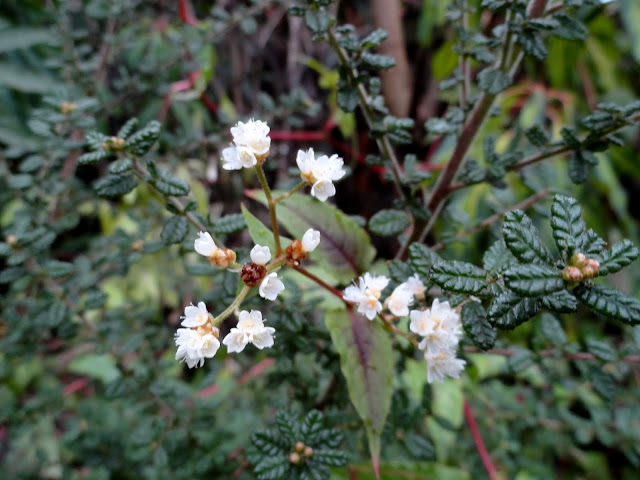 And a few Calluna vulgaris 'Stockholm' flowers are opening. 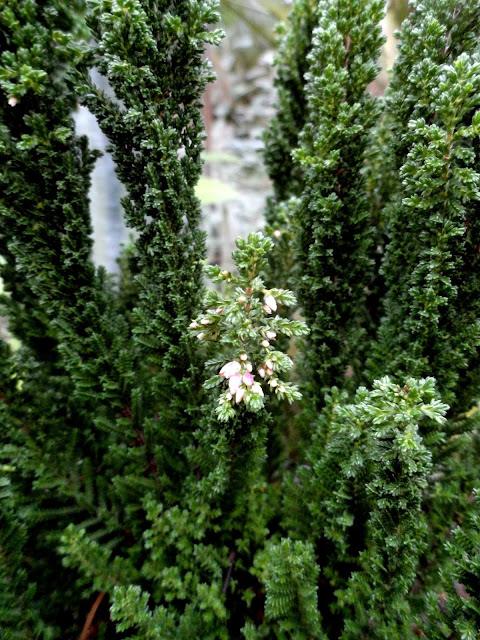 There are a few Grevillea miqueliana flowers open, but again the wind made photographing them rather difficult. 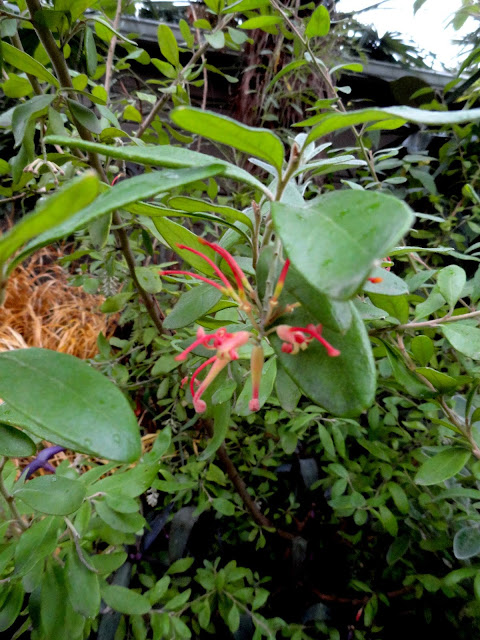 Inside the SPG (shade pavilion greenhouse) Alstroemeria 'Indian Summer' is trying to open its buds. 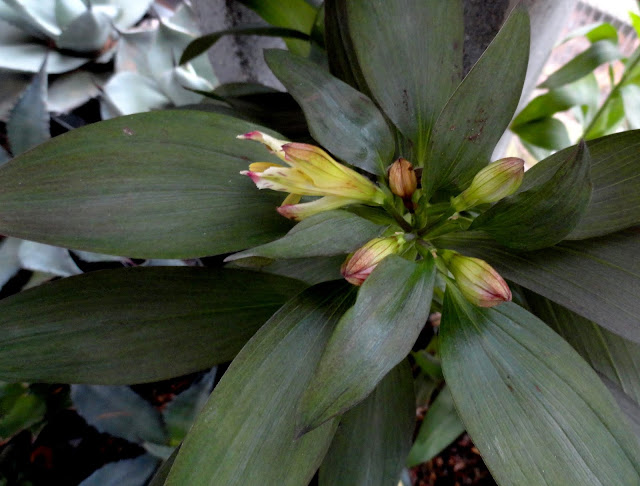 The NOID Bougainvillea is still happy (as is the one in the ground, although it's not blooming) 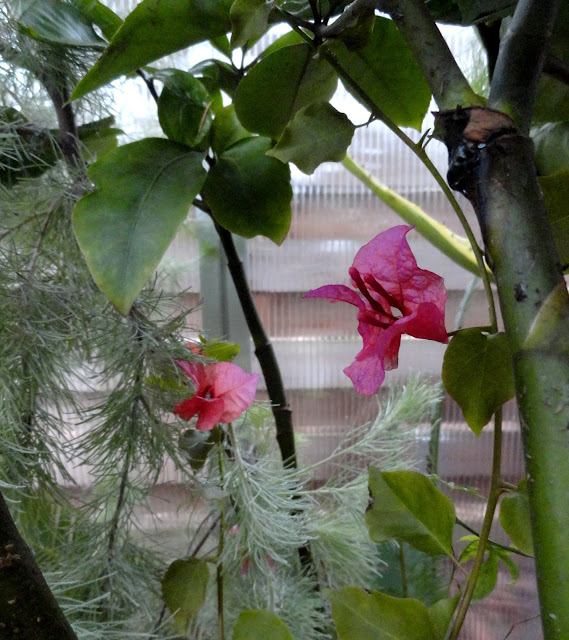 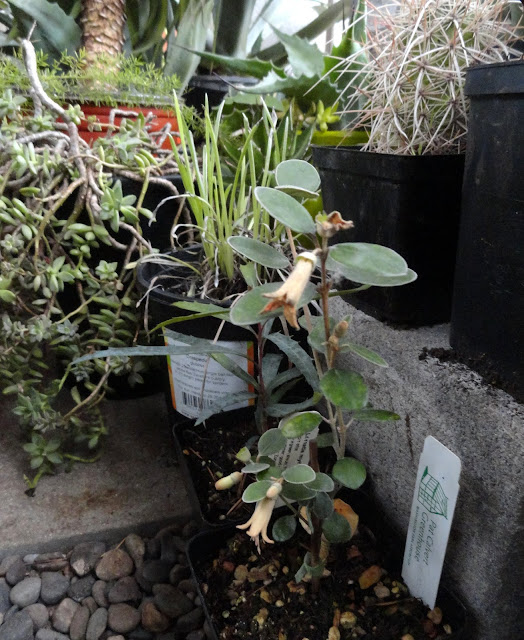 Back outside I was surprised to see there are already fragrant flowers open on the Hamamelis x intermedia 'Rochester'. 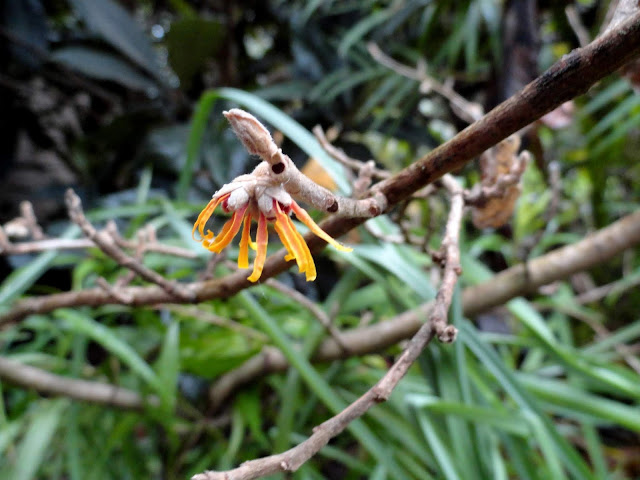 And although it's not a flower I'm sharing the colorful leaves of Ensete ventricosum 'Maurelii', because I can't believe it still looks so good on December 15th! 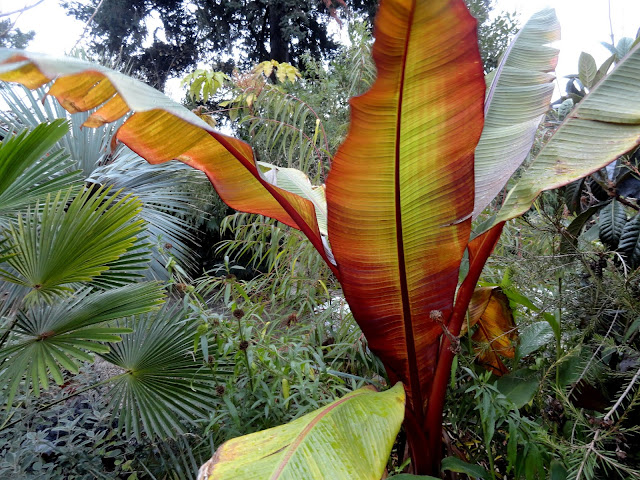 As always Garden Bloggers Bloomday is hosted by Carol at May Dreams Gardens. Only 5 months until May's Bloomday!