Building a fern table: watching the professional in action and a follow-up on how mine's doing...

Back when I wrote about building my fern table (May 26th), I mentioned a workshop with Richie Steffen that I planned to attend at Joy Creek Nursery. That workshop finally took place last weekend, it was great fun. 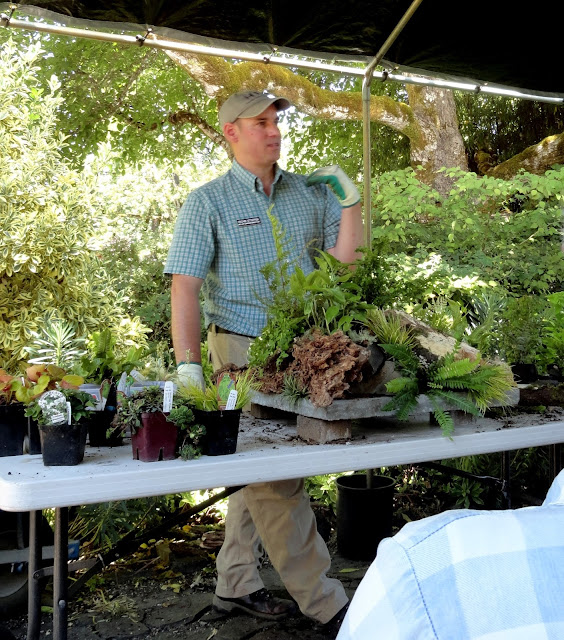 Richie educated and entertained us while building a stunning fern table. I jotted down a few of his "helpful hints" which I'll share below, along with close up photos of the completed planting. Had I been thinking about this post I would have taken a photo as he began by mounding up soil on the cement slab and then arranging bits of wood around the edge. You'll just have to use your imagination. 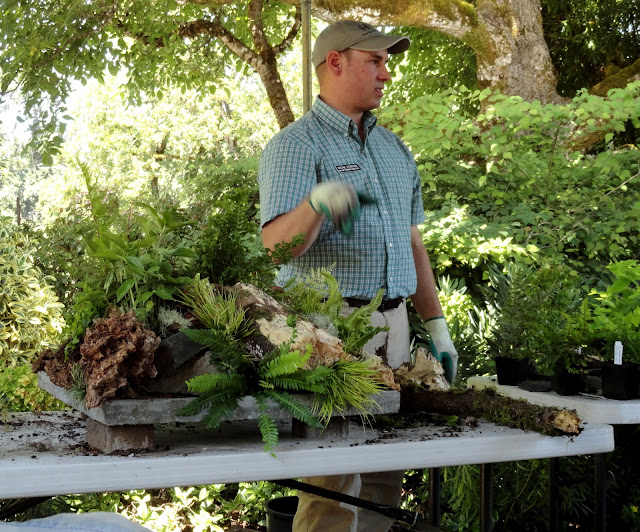 Since this installation was built quite a distance from where it will live at the nursery, Richie's final step was to wrap it with fishing line so the staff could easily transport it. If you're building "in place" at home you don't necessarily need to do this, and once the roots of the plants all knit together it will be much more stable. 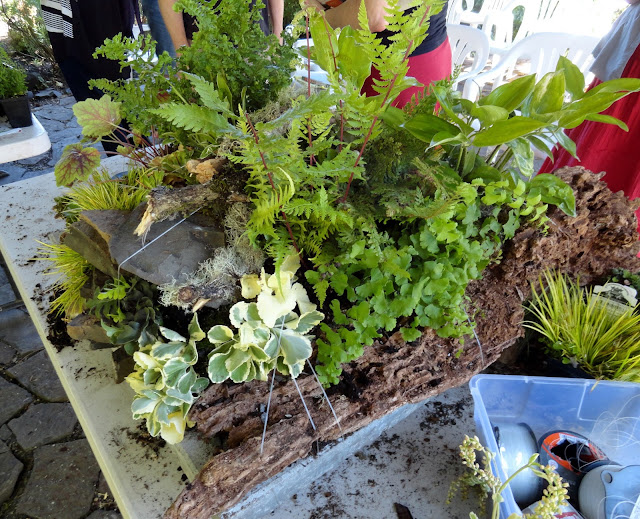 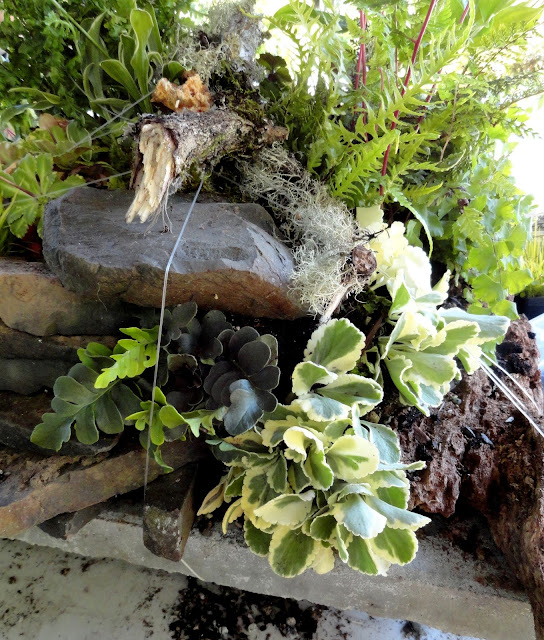 I love how many plants Richie managed to shove into this planting. Cramscaping at its best! I heard a few gasps as he tore and smashed roots to get the plants where he wanted them. I think I'm much harder on my plants than the average gardener. I blame it on the easy-to-abuse Agaves, they've ruined me for wimpy plants. 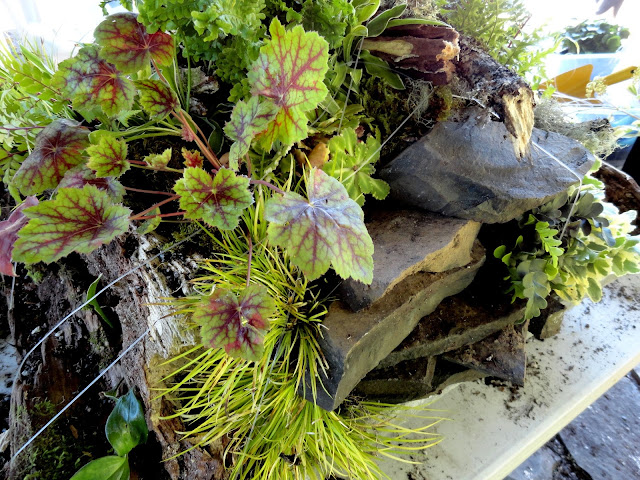 There was originally a piece of wood where these rocks are now. It wasn't cooperating so it got tossed aside and the rocks were built up to take its place. I see a mini-crevice garden in the making... 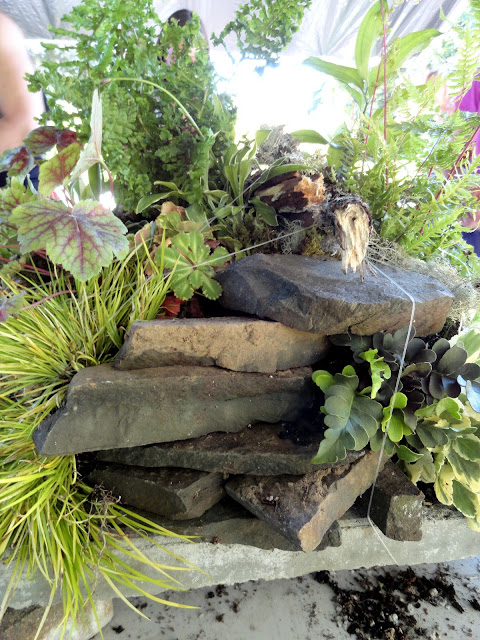 Richie mentioned he'll change out poor-performers as a new table settles in, if one or two of the original plants aren't cutting it. He sometimes even tucks in a tropical fern, and then lifts it before winter, or just treats it as an annual. 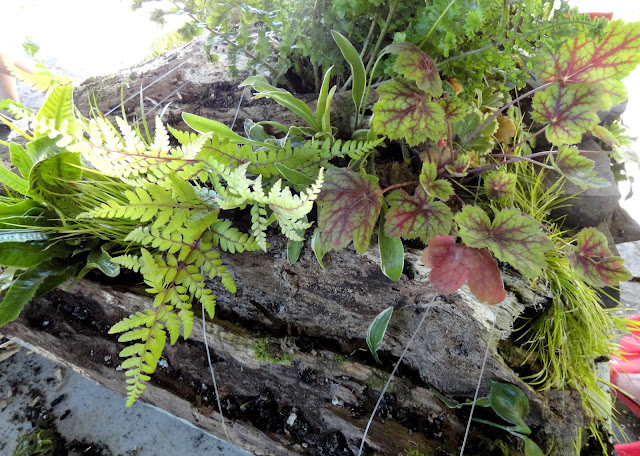 If you can't find suitable chunks of wood for your fern table Richie described a method of creating "moss logs" by rolling up soil in burlap, tying the ends, and covering the entire thing with moss. (I love this idea) He also confessed to wiring pieces of wood together, to create a sort of stump centerpiece. 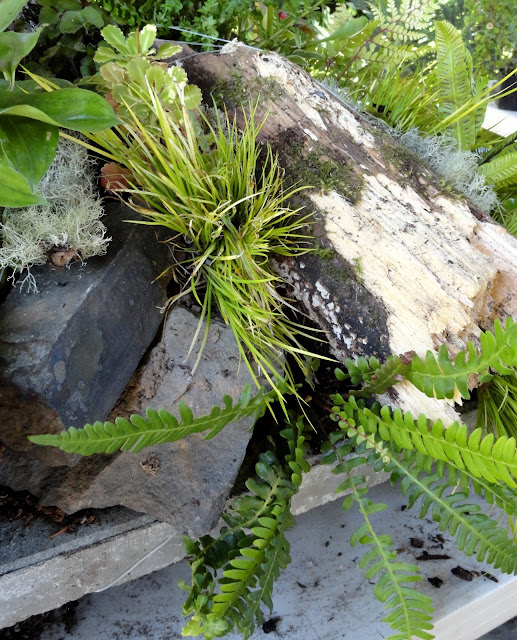 A mix of evergreen and herbaceous plants will add a "seasonality" to your planting. 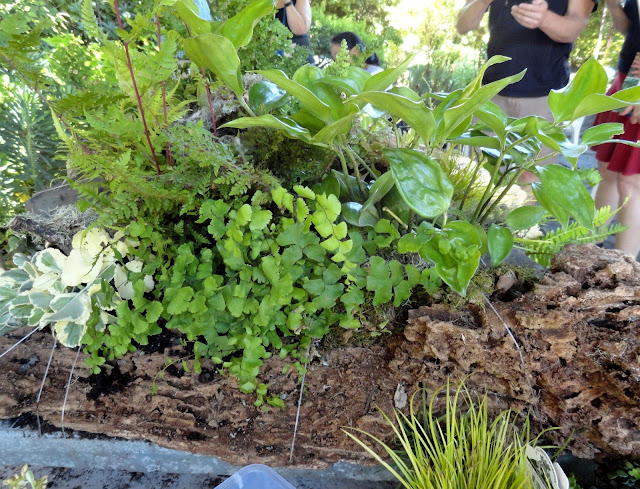 And tucking in spring flowering bulbs, like Crocus, will add another seasonal touch. Beware they may be a one-time wonder under these conditions. 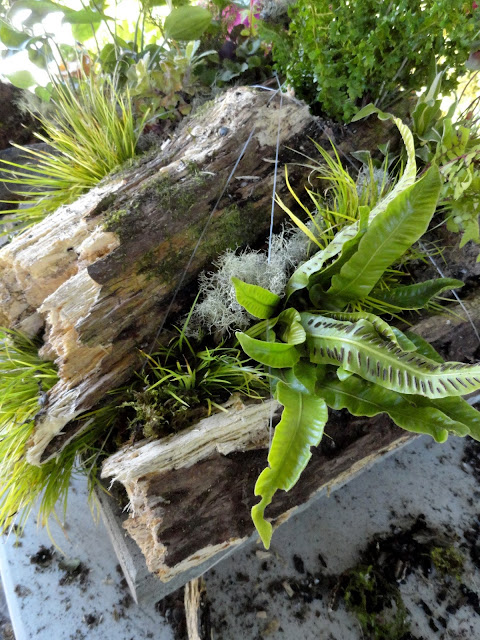 Normally bits of moss would be tucked into any open crevices in the planting. However since he was short of moss Richie instead used small twigs covered in lichen. It's a good look... 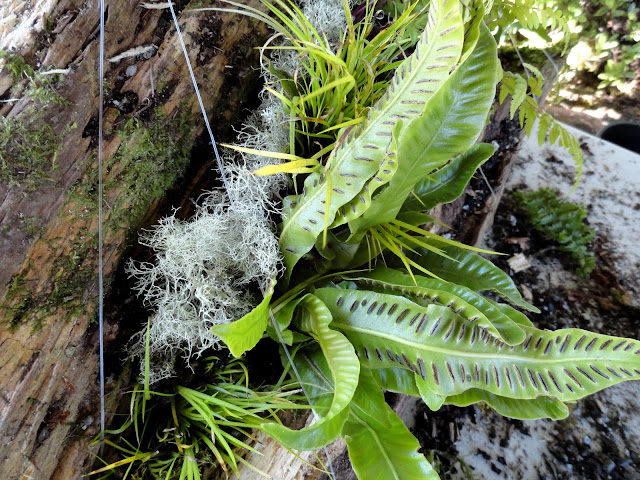 This small Cardamine trifolia was one of the plants pulled for use in the workshop, which didn't get used. It's pretty fabulous don't you think? (note to self for future shady groundcover needs) 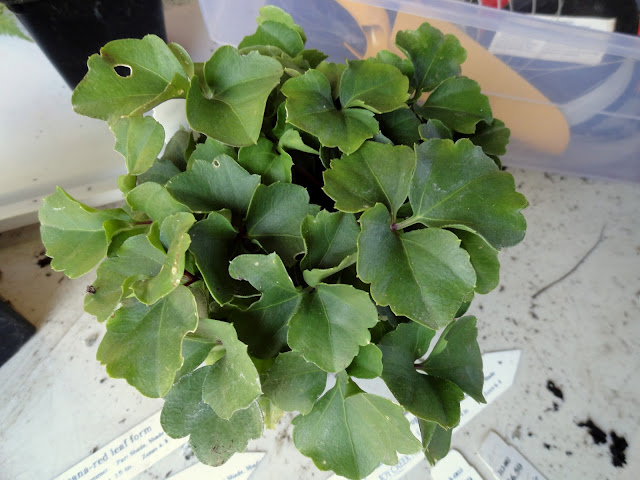 Here's a current look at my fern table, which was built on May 23rd. 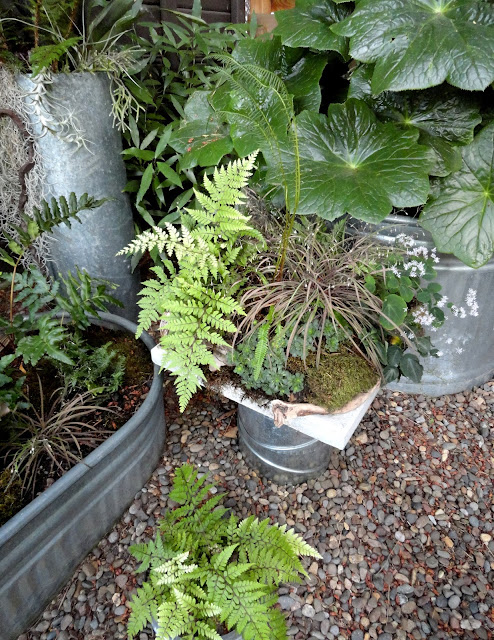 It's withstood lots of 80 degree days, a few 90 degree days and even a couple 100+ days, and is still looking fabulous. I just hose it down when I'm watering the other plants in the area, no "special" treatment. 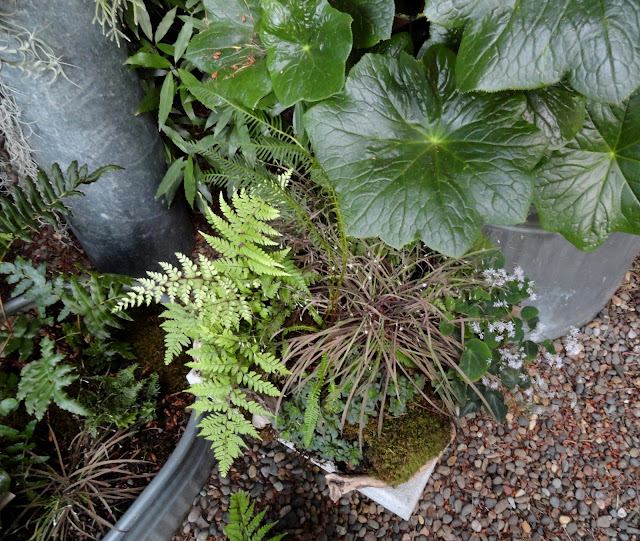 I still love it as much as the day I built it. 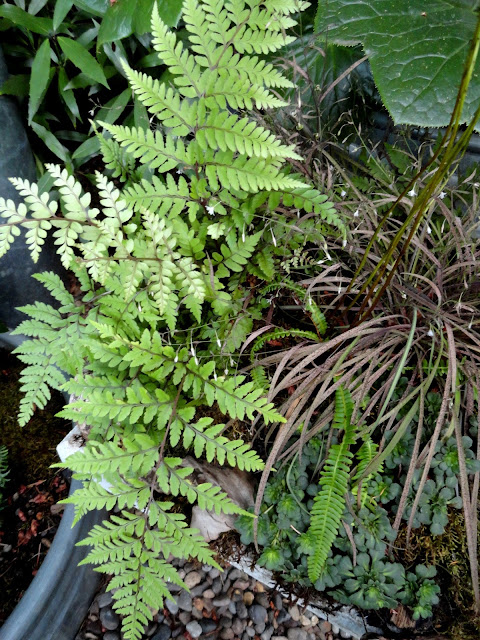 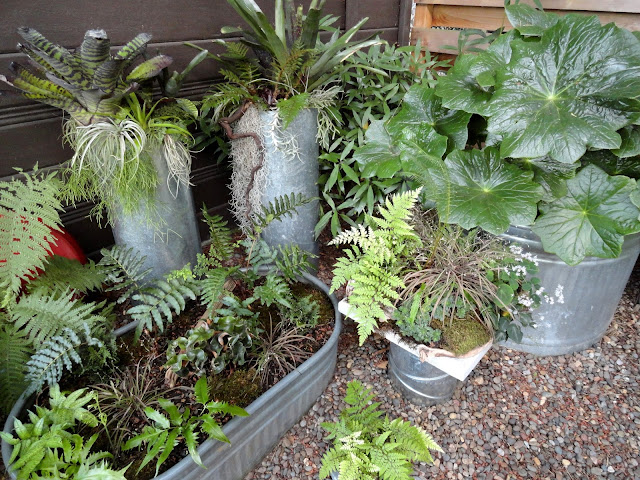 Of course I had to pick up a new fern at Joy Creek, since I was there. Meet Dryopteris filix-mas 'Linearis Polydactyla', and wish me luck, I hear the slugs love it. 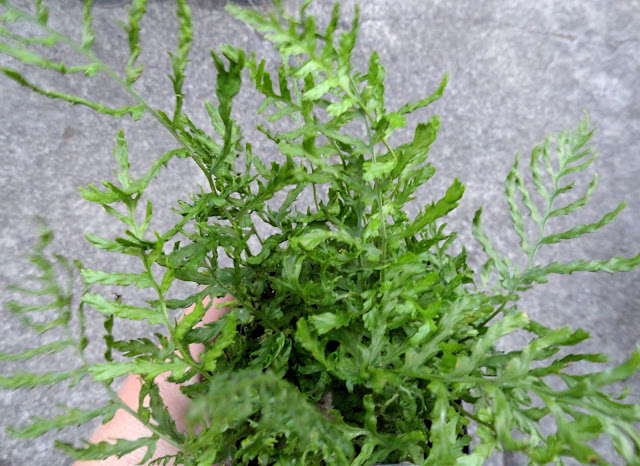